Hiroshi Yoshida: Commemorating The 70th Anniversary of The Death of The Master of Shin-hanga (Modern Ukiyo-E)

The exhibition “Yoshida Hiroshi: Commemorating the 70th Anniversary of  his Death” is currently being held at the Tokyo Metropolitan Art Museum (through March 28, 2021). Take this opportunity to discover the delicate beauty of a shin-hanga (modern ukiyo-e) master.

Hiroshi Yoshida (1876 – 1950) was one of the major shin-hanga painters ( “shin” means “new”, and “hanga” means “woodblock painting”) who had fans worldwide, including psychologist Sigmund Freud and Princess Diana. He impressed the world with his masterful blending of Western-style realism and traditional Japanese woodblock printing methods; but this didn’t happen by accident. His career coincided with the bumpy transformation that Japanese society and culture had to navigate after Japan “opened its doors” to foreign countries in 1868 following the strict isolationism that lasted for hundreds of years. Japanese artists, at that time and in order to establish artistic identity, were forced to reconcile the flood of Western culture that suddenly poured into the country with traditional Japanese aesthetics. Yoshida found his answer by injecting Western-style modernism into traditional woodblock painting.

After 1868, the Japanese aggressively sought to modernize/Westernize many aspects of their society, including the education system and art. Yoshida’s generation was one of the first to receive a fully Westernized art education, and like many colleagues, he started his career as a Western-style painter. Some of his fellow young artists were even given opportunities to study in Europe, and upon their return, he saw how they dominated the Japanese art scene. Yoshida didn’t win such scholarships, but he knew that his landscape paintings that excelled in capturing the subtle beauty of nature were popular among Westerners living in Japan. As he wanted to try his chance abroad, he managed to collect barely enough money for a one-way ticket to the US when he was 23 years old. Once there he held exhibitions in Detroit and Boston which were well received. After the initial success, he spent many of the subsequent years travelling, holding exhibitions and winning awards in various competitions.

During his days abroad, he saw that ukiyo-e was becoming increasingly popular, and even low-quality products were traded at high prices. He saw the opportunity and started producing woodblock paintings upon his return to Japan. It was a strategic pivot for him since he was already approaching 50 years old. He wasted no time and quickly mastered woodblock techniques, and became a one-of-a-kind, modern ukiyo-e artist who possessed a solid foundation in Western painting. 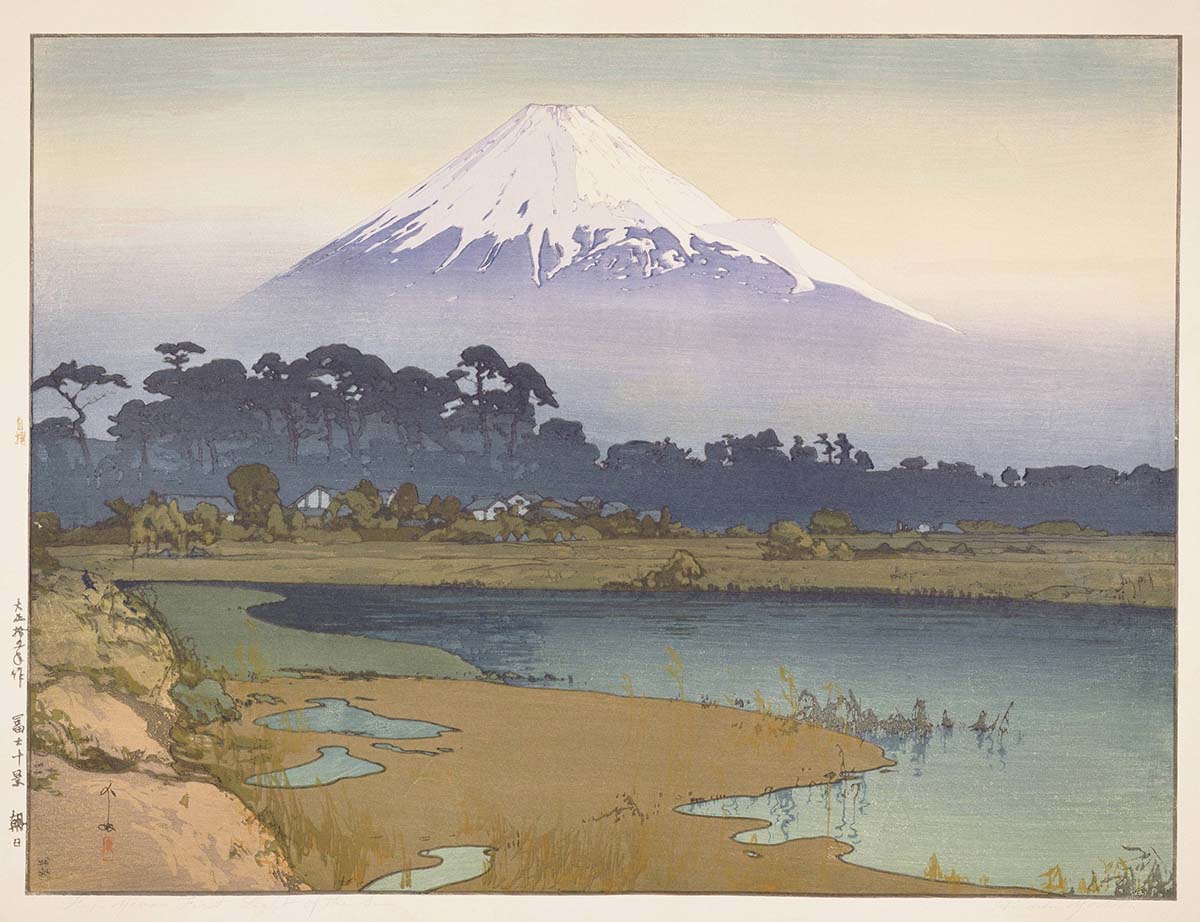 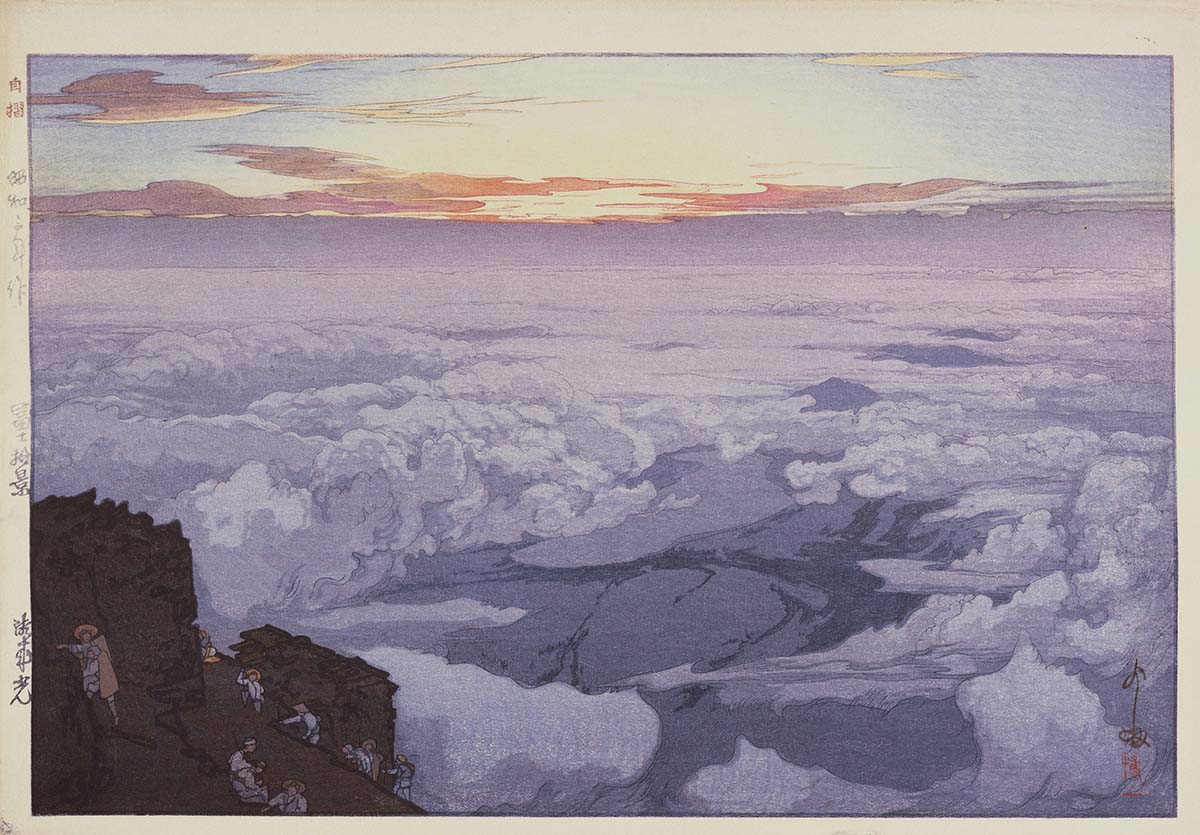 Traditional ukiyo-e often ignored perspectives and boldly altered composition in order to amplify artistic effects. But Yoshida’s shin-hanga was different: not only did he keep to a European realist style that had unaltered perspectives, he also successfully captured subtle gradations of light and shadow, which was absent in traditional ukiyo-e. Woodblock printing in Japan was traditionally completed through a collaboration between a specialized painter, a wood carver and a printer, so Yoshida had to master wood carving and printing, not just painting, so that he could understand exactly what he wanted from his carvers and printers to achieve the delicate nuances of his products. 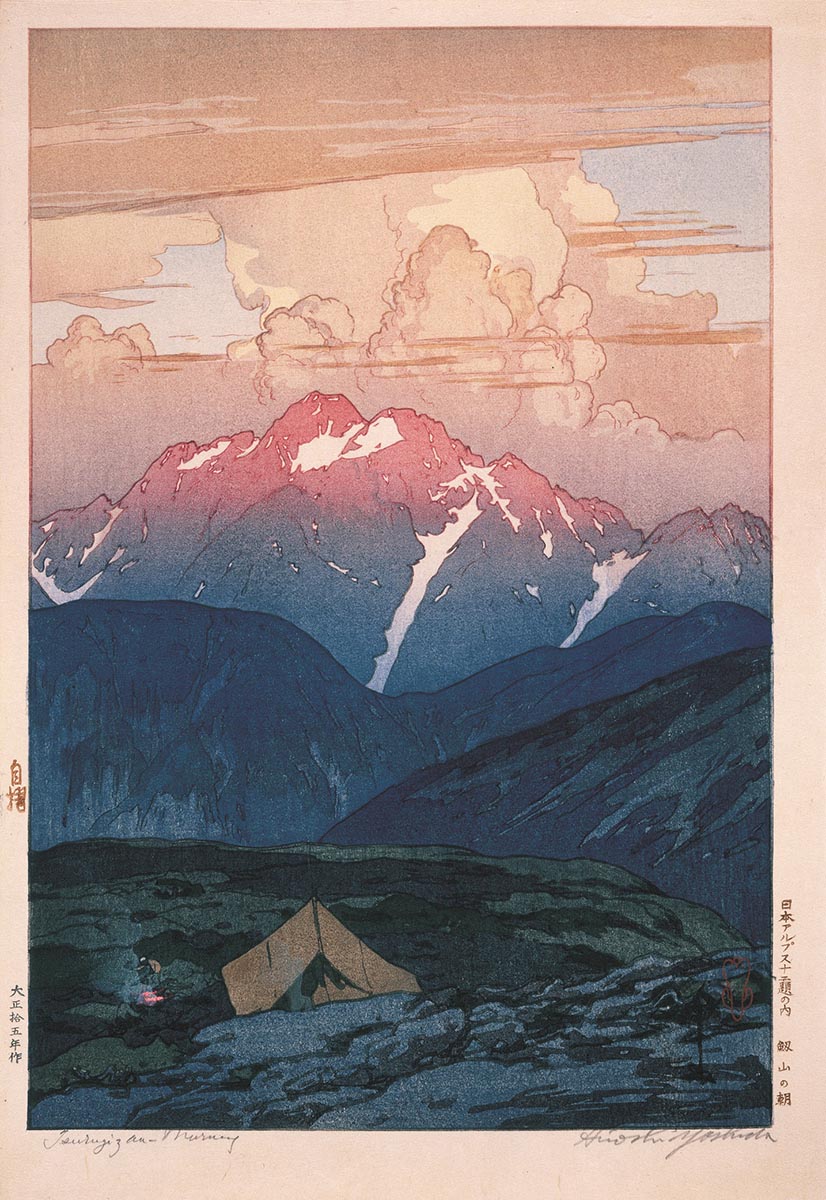 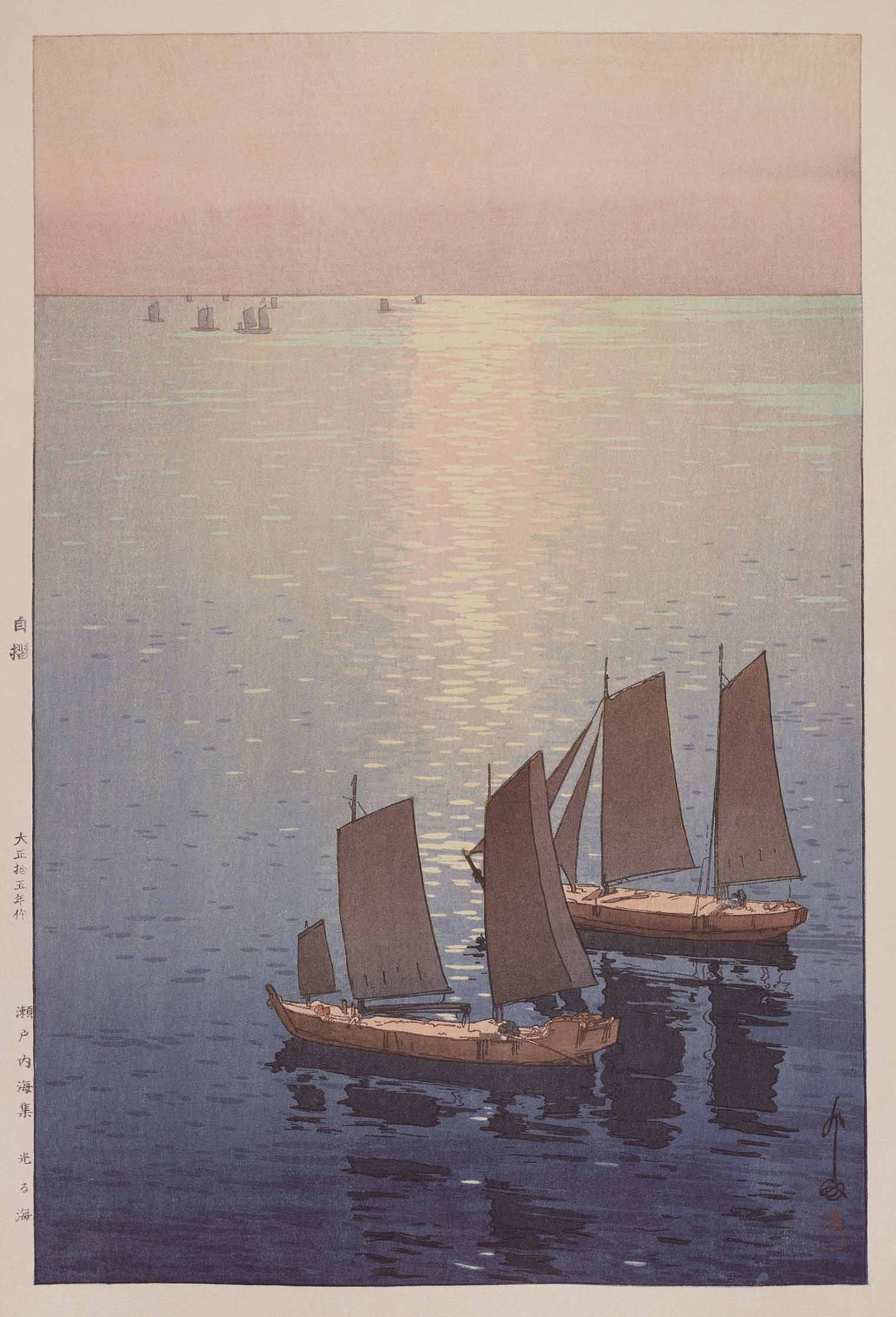 You can see how masterfully he handled light/shadow in the “Sailing Boats” series which had versions portraying morning, forenoon, afternoon, mist, evening and night. He used the same woodblock for all of them, expressing how the sunlight changed the scenes at different times of the day by simply changing the colors to print them. He needed to use an extra-large woodblock and more than 30 printings to achieve the subtle color gradations but Yoshida was determined to pursue his own style. It will be safe to say that the “Sailing Boats” series was the shin-hanga version of the “Haystacks” series by Claude Monet. 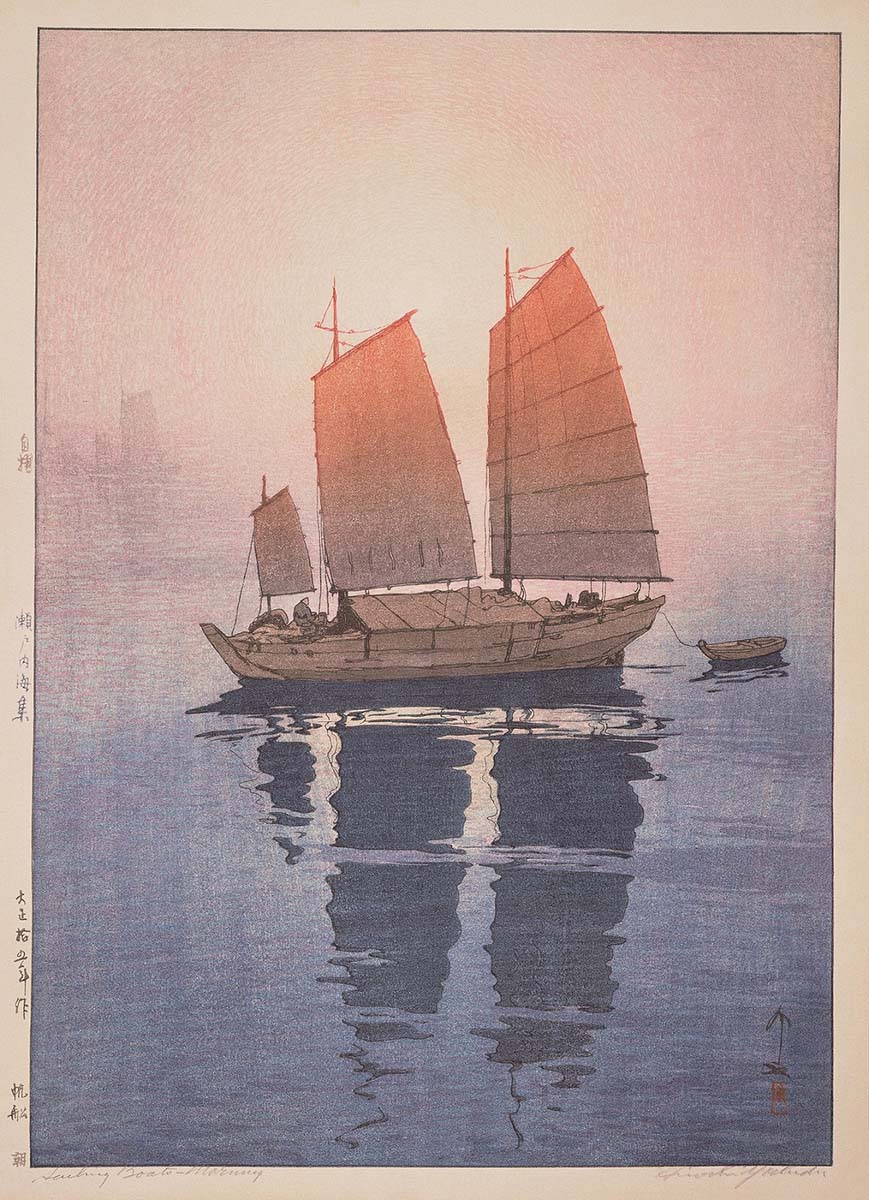 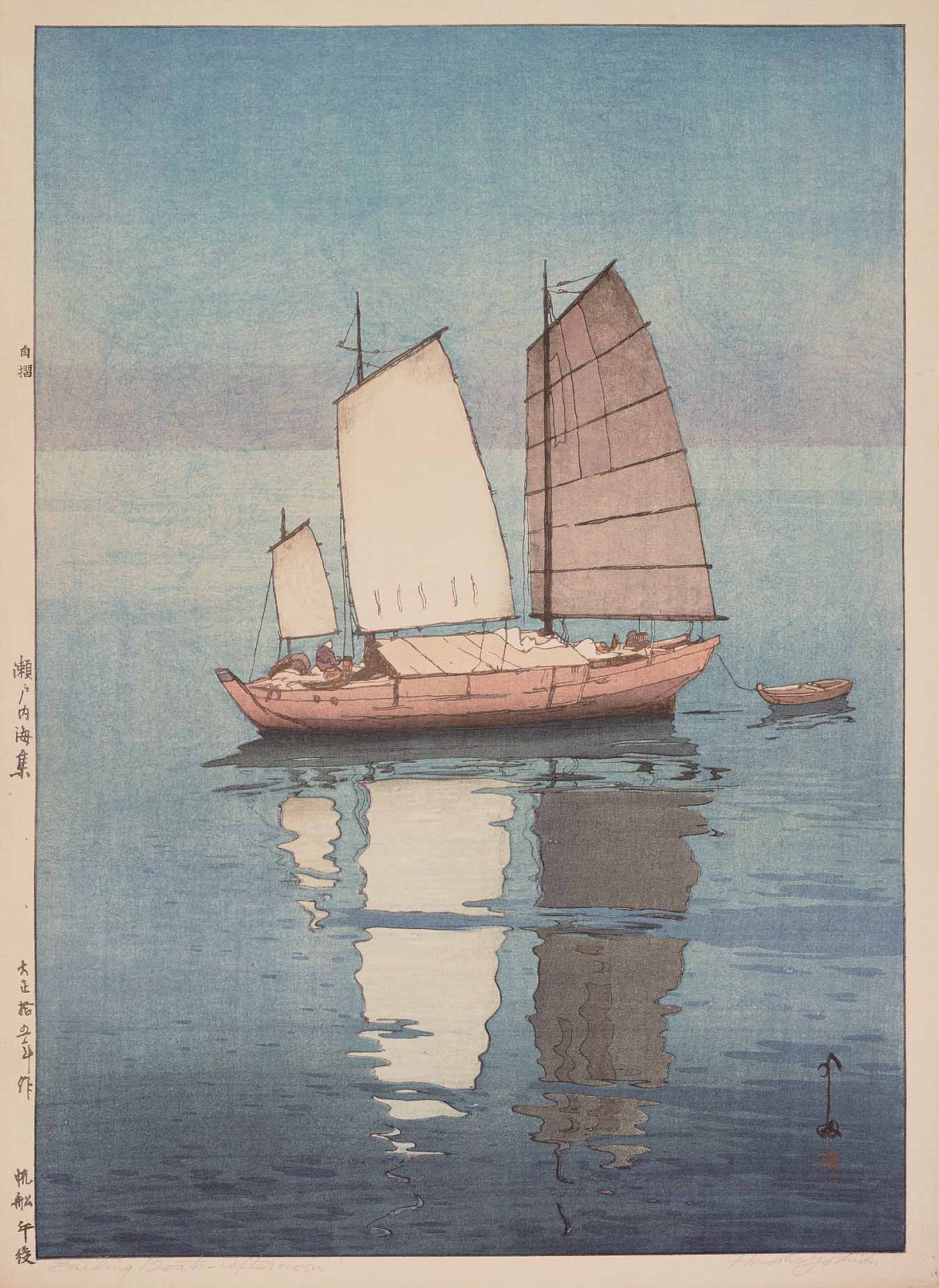 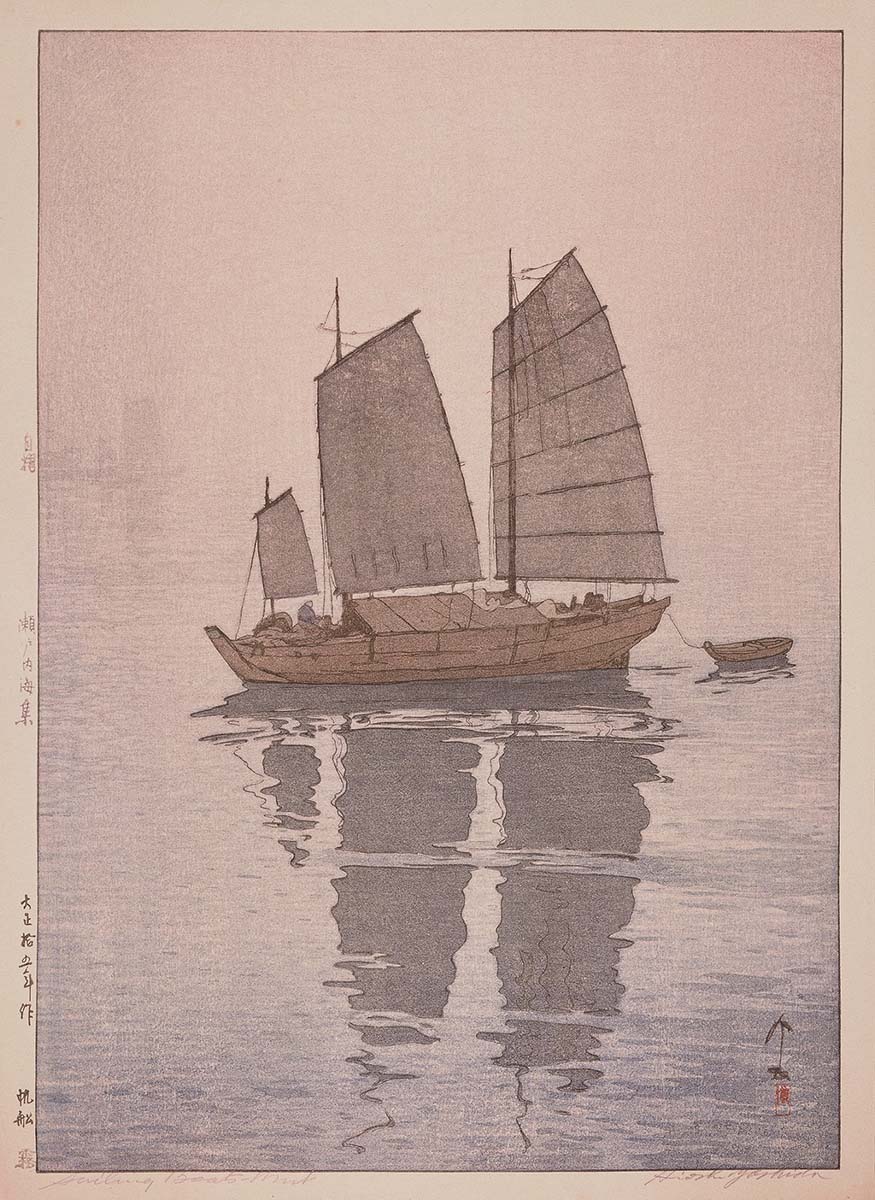 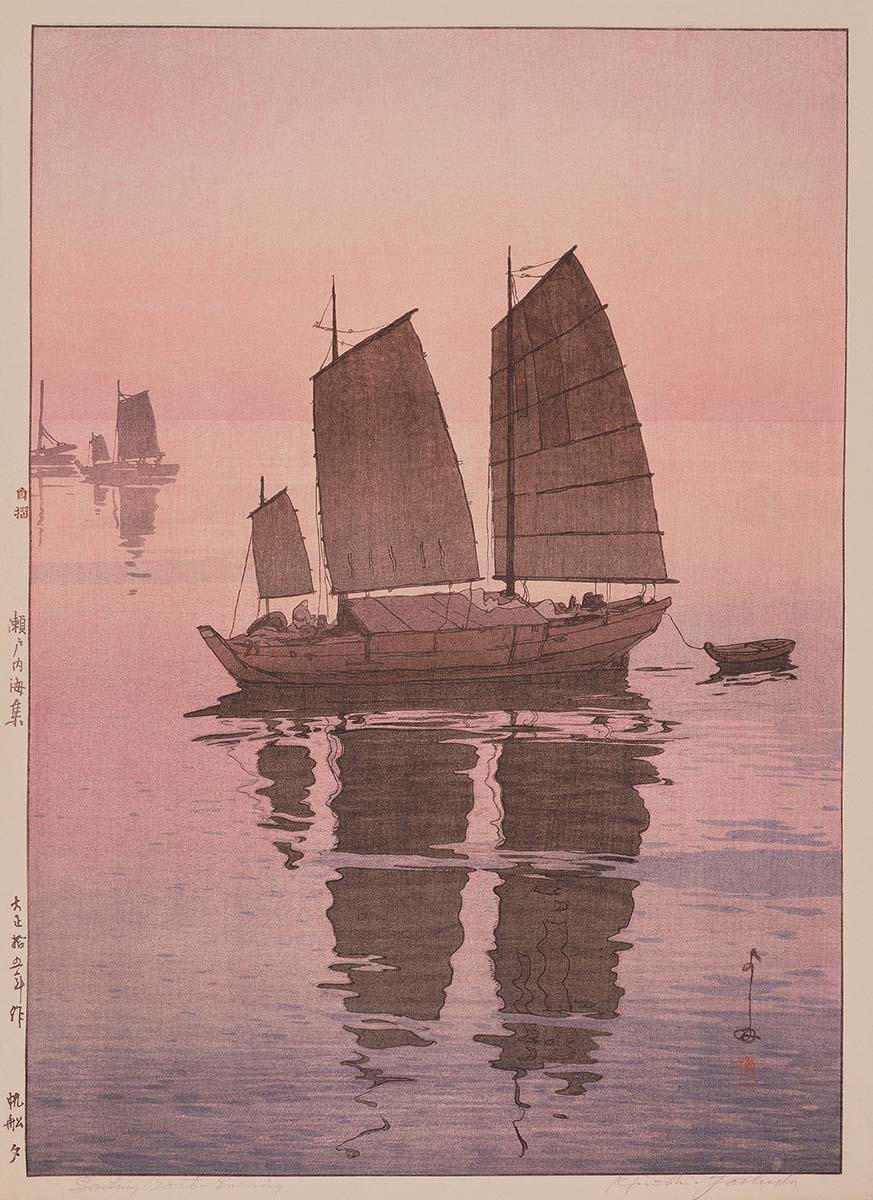 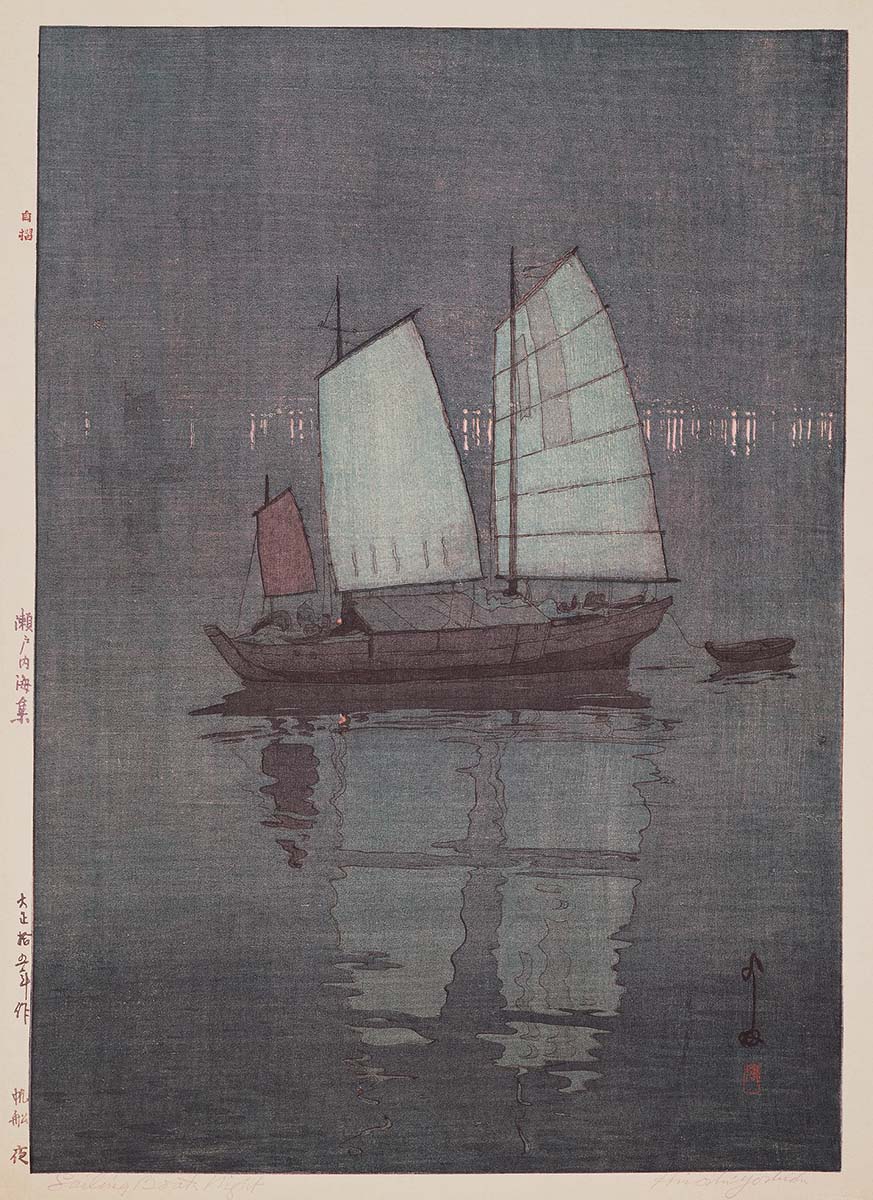 Yoshida also painted Japanese locations as was more traditional in ukiyo-e images, but he excelled in capturing subtle dimness. 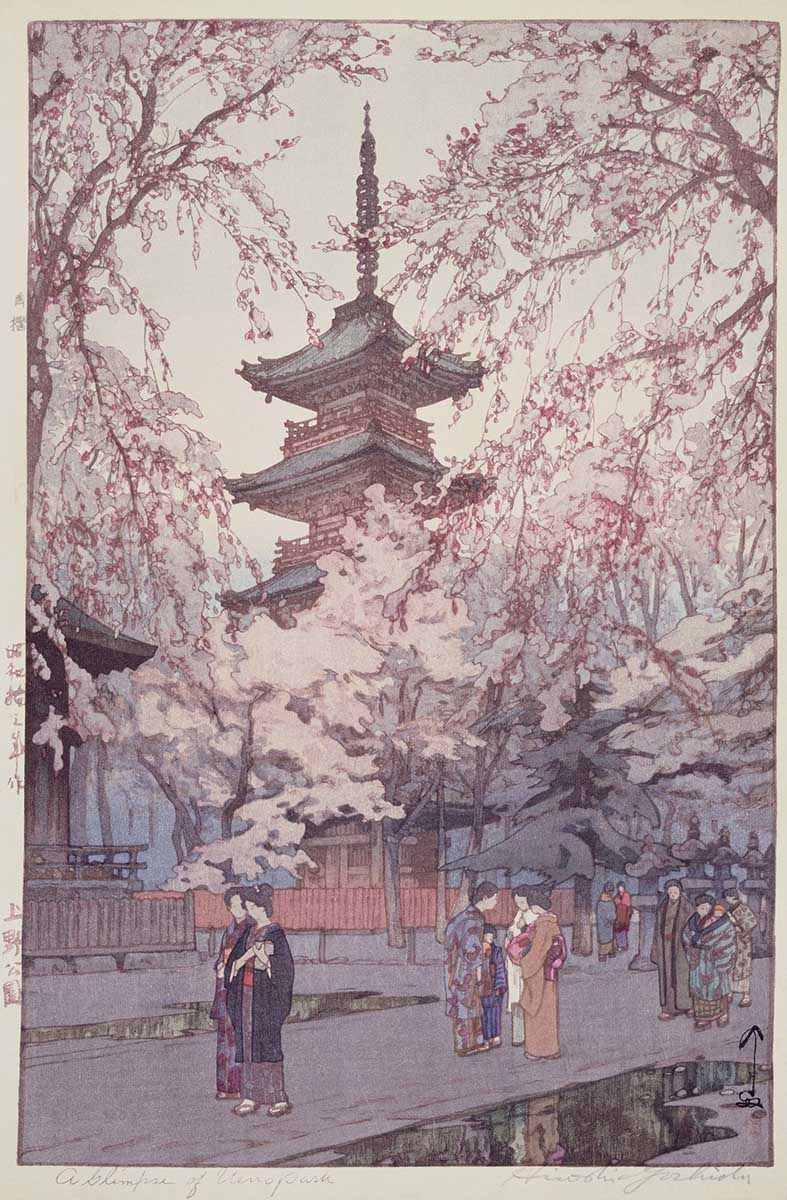 Another novel technique that Yoshida used was to incorporate images from his travels abroad in his woodblock prints: from the Yosemite National Park in California to the Taj Mahal in India, he painted many places using his unique, subtle style. 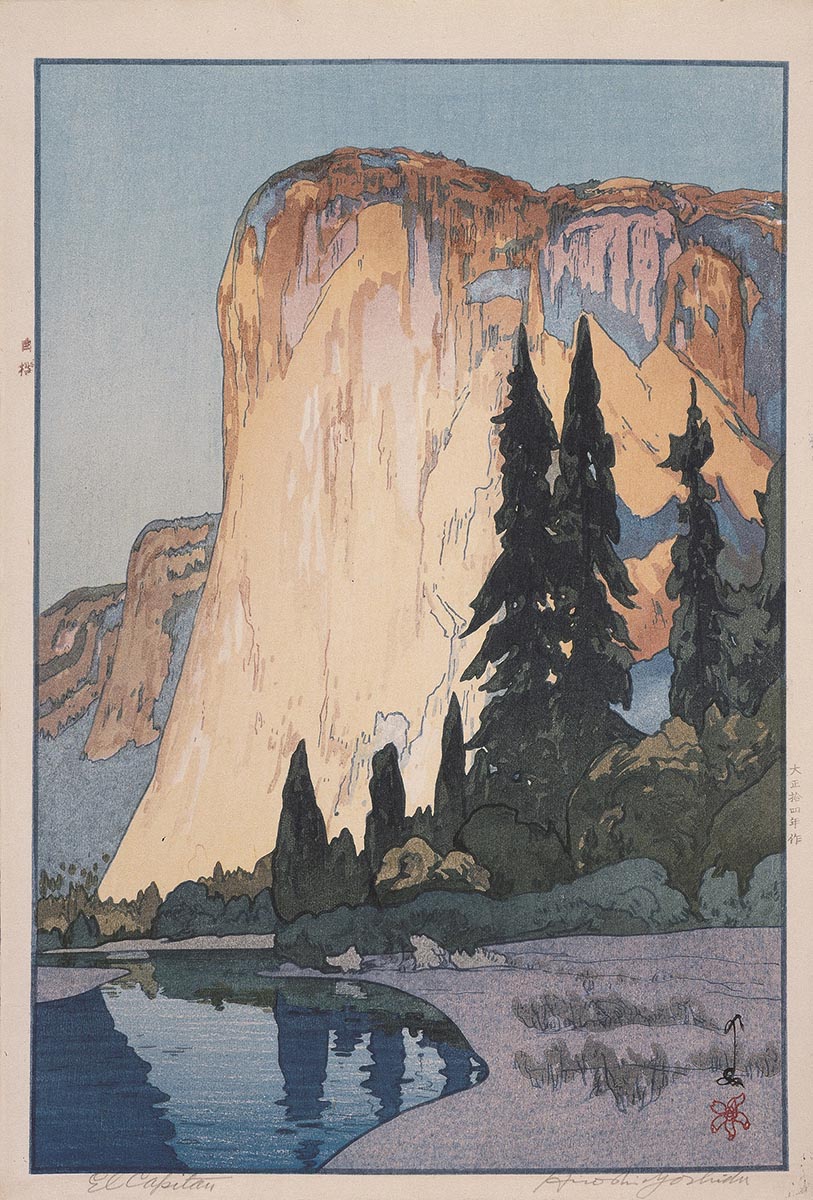 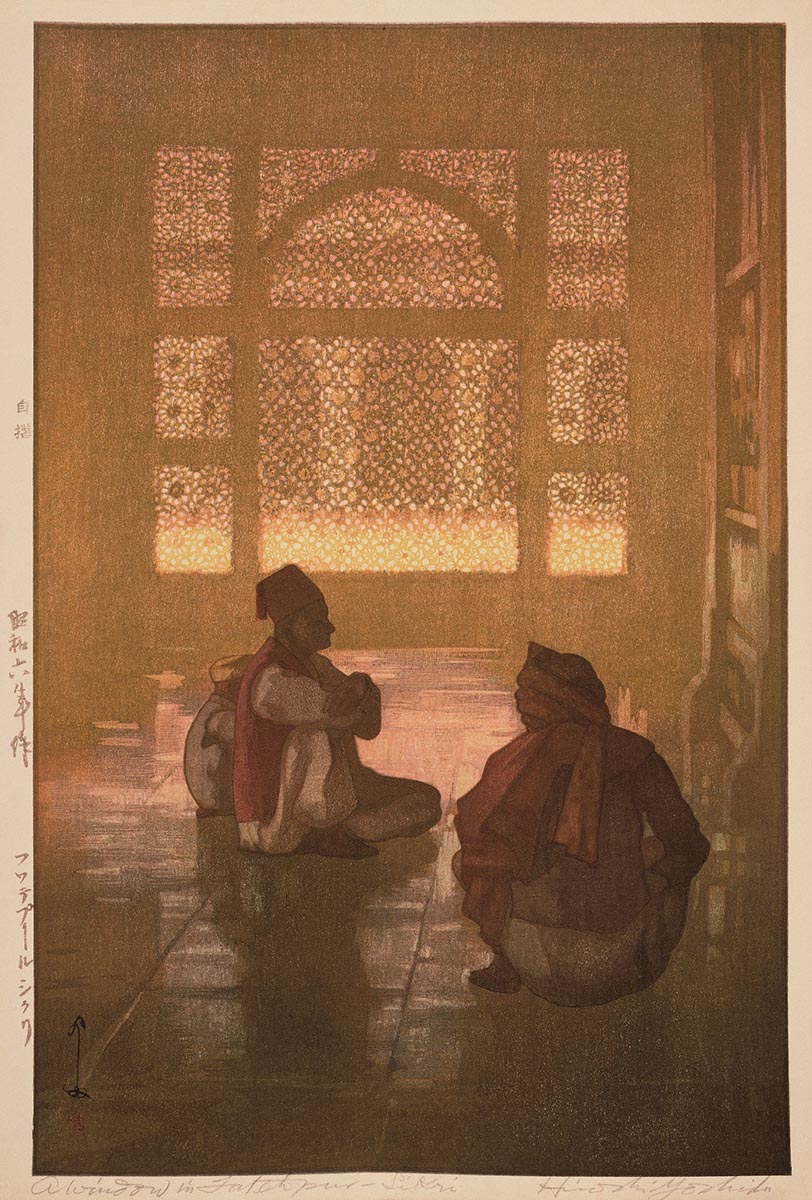