Frank Lloyd Wright (1867 – 1959) is one of the most prominent architects in modern history, but he was also an enthusiastic collector and dealer in ukiyo-e (Japanese woodblock prints). In some years he made more money from selling ukiyo-e prints than he did as an architect. He made multiple trips to Japan after 1905 in order to buy the prints while designing several landmark buildings including The Imperial Hotel Tokyo, which is known to have withstood the devastating M7.9 Great Kanto Earthquake in 1923. It is said that Wright especially loved the “One Hundred Famous Views of Edo” by Utagawa Hiroshige. Hiroshige is one of the most prominent ukiyo-e artists along with Katsuhika Hokusai. 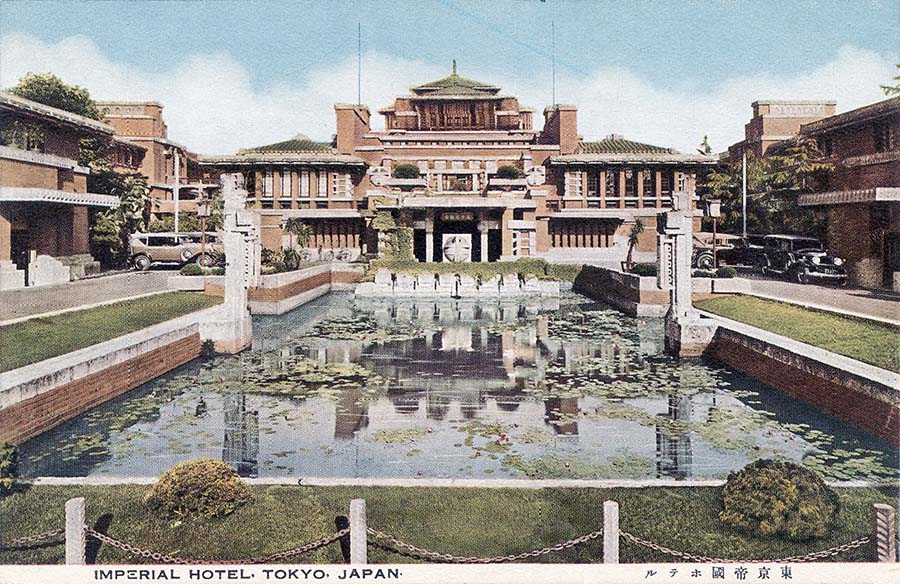 The appreciation/comprehension of space in these works is critical in recognizing the uniqueness of Japanese style because it was very different from the European approach. European style had prioritized perspective as it was developed in the Ancient Greek and Roman eras. When these techniques were rediscovered, during the Italian Renaissance, there was a technical leap forward, dramatically increasing the representational qualities of the art. The use of perspective (using techniques like the vanishing point and the golden ratio) to focus on the main subject.

On the contrary, Japanese artists traditionally used parallel projection. By intentionally eliminating a vanishing point, they re-constructed the sense of space in order to fit three-dimensional, vast and elusive nature onto a two-dimensional, small piece of paper. As a result, Japanese paintings escaped what Kuma calls “monumentality” – the subjective emphasis on one element that bears more importance than the surrounding ones.

For example, with the “Shono,” explains Kuma, Hiroshige used multiple layers stacked in parallel in order to express the spatial extension. With no vanishing point, the foreground was emphasized by linearly expressed rain. And as a background, which is a couple of layers behind, he used color gradation to indicate the relative distance of the forests while keeping their size identical. It was as if Horshige leveraged a copy machine, argues Kuma; the repetition of the same motif with gradually fading tones effectively created incredibly abundant dimensional continuation without the need to fix your eye on one point.

In his “organic architecture” concept, Wright describes what “space” means for him: “an area is never fully comprehended when viewed from one point but must be slowly experienced as one moves through the space.” It is as if Wright was talking about the Japanese painting style that intentionally avoided a fixed focal point in order to embrace ever-changing nature as is, and find beauty in its elusiveness.

Then, Wright found something more revolutionary in Hiroshige’s sense of spatial continuation in “One Hundred Famous Views of Edo,” a series of snapshots of then-Tokyo that he started working on when he was 58. It became Hiroshige’s last work before passing away at the age of 60 in 1858 (9 years before Wright was born).

In “One Hundred Famous Views of Edo,” Hiroshige tried something seemingly unnatural for him: he chose a portrait rather than landscape orientation to produce landscape paintings. Nature stretches out horizontally rather than vertically, just because most of the elements are located on/under the ground. As an ukiyo-e artist who excelled in capturing elusive natural elements, he had used the landscape orientation for most of his career, including the “53 Stations of Tokaido” as shown above. It made perfect sense.

But out of the blue, points out Kuma, Hiroshige pivoted to try a vertically long frame at the very end of his career. Was it his choice or at the request of his client, we will never know, continues Kuma, but it’s certain that limitation can be the mother of a creation.

And that is how it turned out.

The “Sudden Shower over Shin-Ōhashi bridge and Atake”, from “One Hundred Famous View of Edo”, Utagawa Hiroshige, 1856-58 [Public Domain]

Because here he [Hiroshige] had an idea of swinging this horizontal into the vertical; and in doing that so handled everything to give you a continuous sense of space. Not something within the frame, as most of these others were, but something of which you caught a glimpse which gave you a sense of a great continuity. That element wasn’t present in any of the previous things. But you see that go through all the series. The greatest idea in landscape that ever could be found. This is unique in the history of art. And this is certainly was a great idea. Now here Hiroshige did, with a sense of space, very much what we have been doing with it in our architecture. Here you get a sense of tremendous, limitless space, instead of something confined within a picture…

…Now the non-objectivists are preaching that everything should be within the frame. That you choose a spot somewhere in it, and that everything should be concentrated on that spot. Well, I think that’s absolutely the bunk when you see what can be done by disregarding any spot… eliminating the spot. Where is the focus? Show me. On what is your attention focused? Nothing. You are right in the great breadth and spread of the scene.” (Kevin Nute, Frank Lloyd Wright and Japan, Routledge, 2000)

Kuma reminds us that the vertically long frame is inherently “monumental” – it usually calls for a strong focal point (that’s why it’s called “portrait,” isn’t it?), especially when depth/background is dealt with using a perspective. But Hiroshige miraculously succeeded in framing horizontally natural landscapes in a vertically expansive but horizontally limited frame without dramatizing any particular elements. One of the reasons why he could do such a seemingly impossible job was his ability to deal with the dimensional depth by applying a variety of techniques (including perspective this time), to blur the spatial boundaries that would otherwise have emphasized one element over the others. The outcome was the uniquely quiet, subdued but expressive snapshots of Edo that seemed to keep expanding way outside the frame. Especially when he only left a “glimpse” or a hint of someone/something that was there a second ago, an absence augmented by the elusiveness of our own existence or nature. It is just thrilling.

A glimpse of a woman – often a prostitute that occupied a unique corner in Japanese traditional culture – frequently appears in the “One Hundred Famous Views of Edo.” It is worth emphasizing that it was mostly just a glimpse of her, sometimes just a hint, but never the entire profile.

Even using a portrait frame with limited horizontal expansion, Hiroshige was not afraid of introducing bold vertical lines. The composition amazingly delivers a continuous sense of space.

And finally, bridges were frequently used to literally “bridge” one side of the piece with the other side, without strictly defining the actual distance –  they deliver the impression that they could extend as far as they want, and you are left with a vast sense of space.

It is this sense of divergence and diffusion, not convergence, which is unique to Japanese arts, whose fundamental philosophy had been to accept and embrace ever-changing nature as it is, rather than resist the change and try to capture and own part of nature. Such an approach influenced Wright’s “elusive” idea of “organic architecture” – although he adamantly denied it – and also Kuma’s work proposing alternative ways to connect people, architecture and nature. The next post will discuss how Hiroshige’s aesthetics inspired prominent architects in different places and at a different time.