Japanese aesthetics are known for simple and minimalist design details and a unique appreciation of natural beauty.  There have been a couple of decisive moments in history that helped cement those qualities. The “History of Japanese Aesthetics” reviews the social background of the 1). Heian, 2). Kamakura, 3). Muromachi and 4). Edo periods and discusses how these periods affected the formation and crystallization of Japanese aesthetics.

The latter half of the Edo period

In the previous article, we reviewed the Kanei and Genroku cultures that animated the first half of the Edo period which was transitioning toward modern society both economically and morally. During that process, the culture also transitioned from Kyoto-ism which focused on graceful, authentic, refined aestheticism to Edo-ism that embraced the joys and sorrows felt in daily lives of ordinary people. People were increasingly empowered as the economy and the society became diverse, during which process production techniques advanced rapidly to mass-produce entertainment items such as books and pictures to satisfy their hunger for cultural curiosities.

Another important aspect: although the Edo period is known for sakoku, the isolationist foreign policy that literally meant “lock up the country from outside influence,” in reality foreign goods, technologies, disciplines and ways of thinking trickled into Japanese society from Europe, China and other Asian countries in critical ways. In particular, a scientific, logical and humanist worldview stimulated a traditionally perceptive and abstraction-oriented Japanese culture to move it in a new direction. The culture of the latter half of the Edo period became even more diverse and vibrant, and Edo cemented its position as an epicenter of economic and cultural endeavors.

The emergence of the iki aesthetics

As Edo increased its cultural influence, so did the appreciation of iki, a unique aesthetic embraced by the Edokko – inhabitants of Edo. Very different from the people of Kyoto, the Edokko were famous (but not really notorious) for being direct and blunt – short-tempered, pretentious and easily emotionally moved. Reflecting those characteristics, iki was behavioral aesthetics rather than a style of artistic expression such as impressionism or Victorian-style. As a result, iki is subjective and rather difficult to define, but in a nutshell, if Kyoto-style was about dressing up, iki was about dressing down. If Kyoto respected the establishment, Edo wasn’t afraid of being disruptive. Iki was about showing your moxie to resist conventional moral/beauty and simplifying or streamlining what it meant to be an attractive/cool person or thing. Edo people believed that dressing themselves down with less frills could be more stylish and fashionable than dressing up. Iki defined the latter half of the Edo culture, the word is still relevant and widely used today. 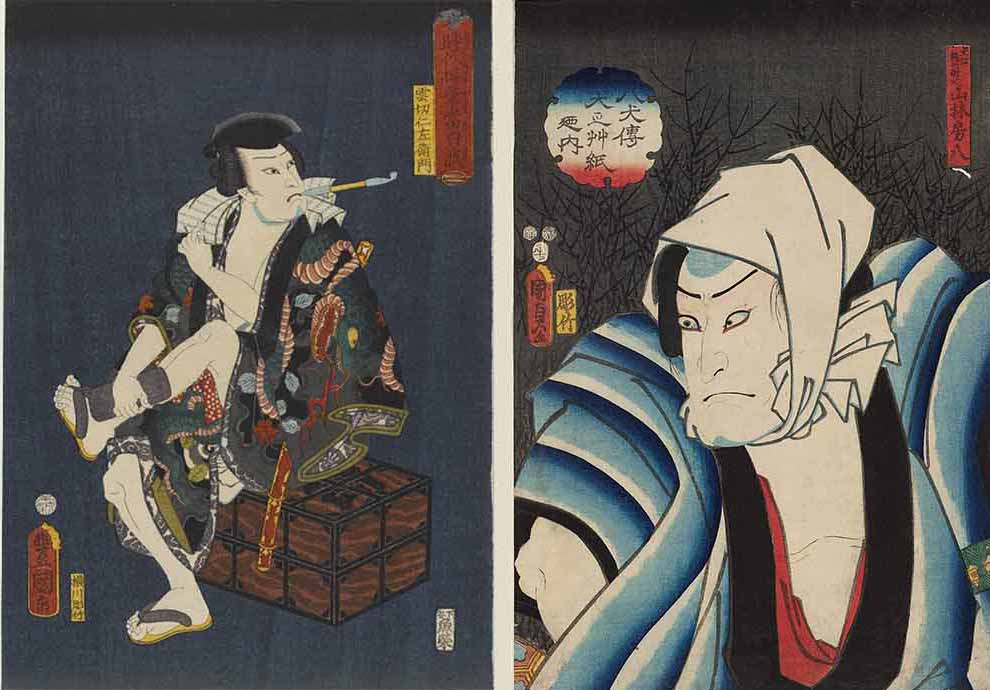 Ukiyo-e by Utagawa Kunisada.
Certain professionals – kabuki actors, firefighters, fishermen, policemen or top-level prostitutes (who were considered fashion icons) led the trend of iki.
With iki-style, you make small tweaks in the way you dress or behave so that you appear laid back and/or ill-mannered in a cool way. Iki was also about implicitly raw sex appeal.

Due to the sakoku policy, little foreign information reached Japanese soil in the first half of Edo era, but it was going to change when the Tokugwa administration relaxed restrictions on imports of non-Christianity related books (Christianity was considered a threat to the Japanese authorities during the Edo period). By the mid-18th century, foreign influences were noticeable present, stimulating people’s intellectual curiosity. European sciences such as medicine and astronomy led the way, but the study of Japanese and/or Chinese history and literature also became popular.

Analytical/scientific worldviews were somewhat alien to the Japanese, but they were blended with a traditional approach to produce curious outputs. 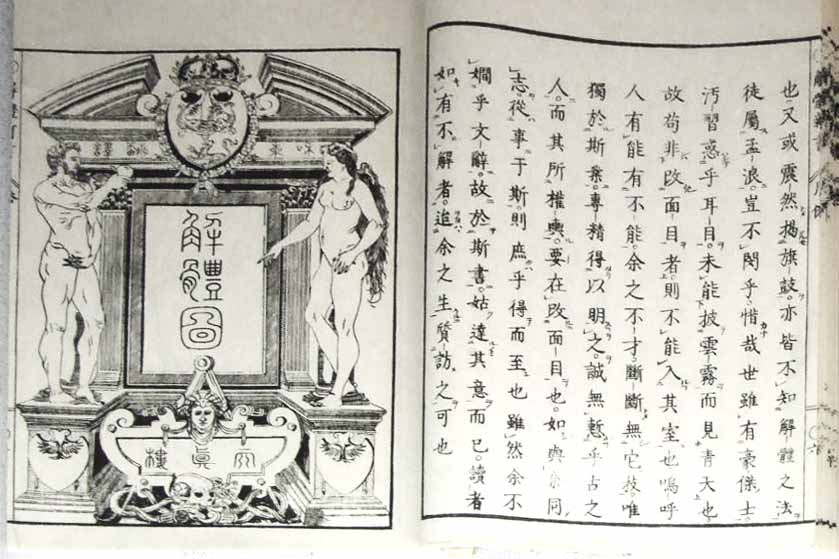 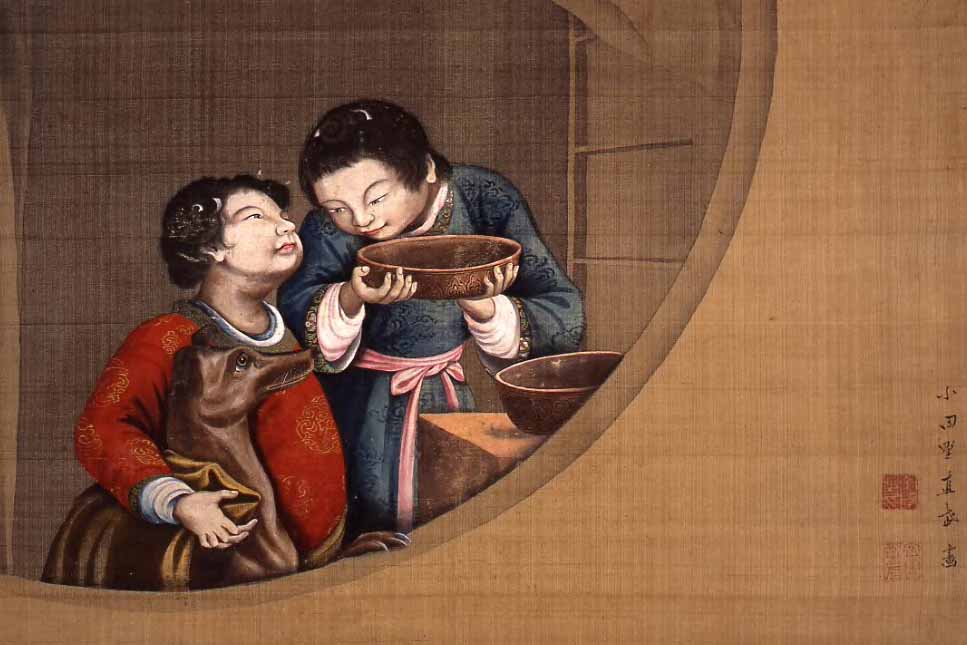 Naotake Onoda (1750-1780) was a samurai-turned painter who adopted European style painting.
Left: Onoda drew illustrations for the “Kaitai Shinsho,” a German anatomy textbook that was imported from the Netherlands. The book was sensational because it was the first of its kind in Japan.
Right: Onoda’s artistic style exhibited a curious mixture of foreign flavors.

Jakuchu Ito (1716-1800) was born into an affluent mercantile family, but retired from the family business early so that he could devote himself to painting. It is believed that he was influenced by Chinese painting, but his style was a unique kind of non-conventional realism that almost looked surreal.

The dawn of ukiyo-e

In the pre-photographic era, nishiki-e and ukiyo-e played a role in producing portraits of celebrities or fashion icons. Suzuki drew many “bijin-ga” (picture of beautiful girls/women), which were vastly popular, and so were the women featured in those pictures.

With iki moxie, Edokko tried to ridicule everything

The spirit of iki starts to appear during this era, and the best place to trace it is in 遊郭 (yukaku or brothels) which operated in designated areas. Curiously enough, the yukaku functioned as one of the major social/political/cultural hubs during the Edo period as they were frequented by men regardless of their class. (In addition to being entertained, influential men often socialized and had politically sensitive conversation at yukaku.) Also, freed from a conventional, reduced role as women, top-level prostitutes were fashion icons, trend setters and influencers who could shrug off even important men, if they felt their behaviors weren’t iki. To satisfy men’s eagerness to learn how to behave iki at yukaku and play a savvy love game, a plethora of books were published which sold very well. The high demand for those books – called 洒落本 (share bon – “guide to become cool”) – created a publishing industry boom. 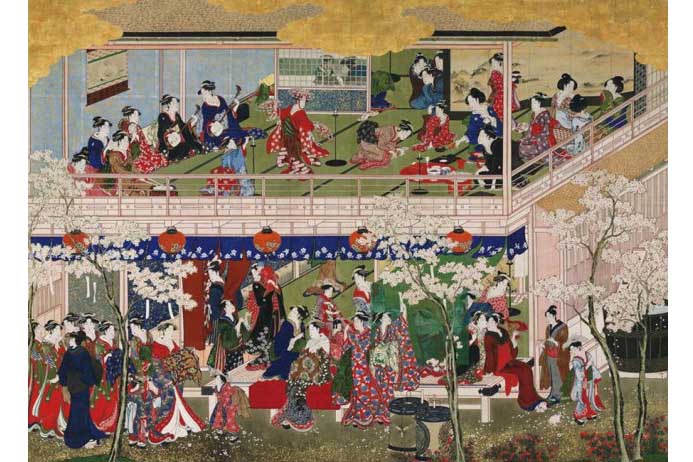 “The Flowers of Yoshiwara” by Kitagawa Utamaro.
Yoshiwara was the largest yukaku area in Edo and Japan.

Such enthusiasm for printed materials produced some notable writers such as Santo Kyoden (1761-1818), who wrote a lot about silly stories filled with wit, puns and parodies. Kyoden style was very Edo and iki in that it showed a determination to laugh and shrug everything off even when you couldn’t afford to do so. Such an attitude sometimes made the administration upset, but the Edokko kept their moxie and enthusiastically supported a variety of entertainment. 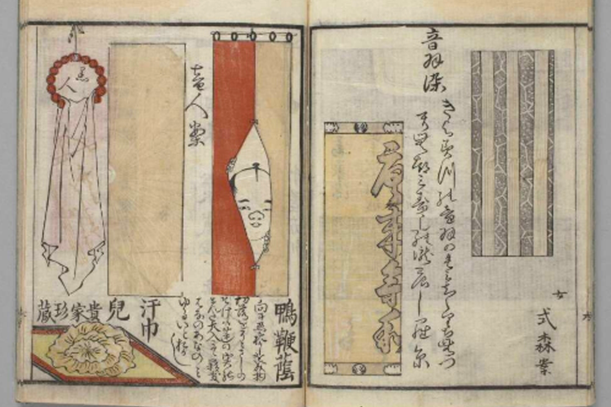 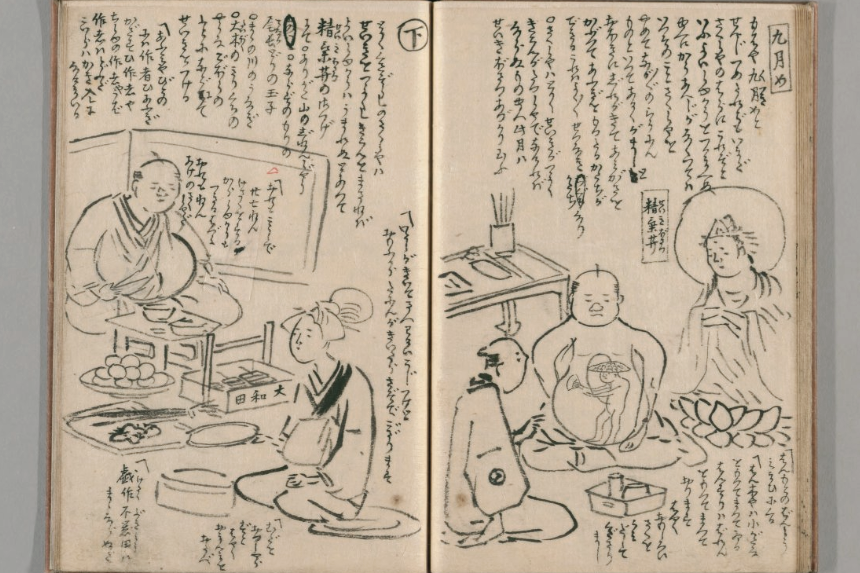 Left: “Tenugui Awase” produced by Santo Kyoden. Mocking traditional entertainment social events by aristocrats, Kyoden made up a tenugui (hand towels) design competition social. The book compiled its results – dozens of new tenugui design full of parodies and humor.
Right: Kyoden also wrote a story of a writer – himself – struggling to produce stories by likening him to a pregnant woman trying to give a birth to a child.

Satire and humor also became one of the most sought-after topics in literature. As discussed in the previous section, haikai (the foundation of haiku) had already become popular in the early Edo period, but by the Horeki/Tenmei era, the satirical version of haikai was born. Called 川柳 (senryu), people enjoyed writing about the silly side of life, relationship or society. As some senryu were political, it was often monitored and censored by the Tokugawa administration.

The Tokugawa administration that maintained a solid power base for 260 years was about to collapse because foreign countries started pressurizing Japan to “open its doors,” since it was still trying – albeit in vain – to stick to its sakoku (closed door) policy. It was a curious situation: although the country was flourishing within its tightly closed economic boundaries, it was obvious that there was no way it could compete with the modern technology exploited by Western countries. European powerhouses arrived in large, scary-looking, black metal ships (which the Japanese called kurofune (black ships)) and people were intimidated and panicked. Small conflicts between Japan and foreign countries occurred here and there, rattling the Tokugawa administration.

Feeling the threats posed by these foreign powerhouses, the Japanese decided it was time for a radical change to re-develop the country so that it could face them. Feeling patriotic, they eventually rallied around the tenno (emperor) and toppled the Tokugawa administration without a civil war. This shift of power (surprisingly less blood than anticipated) was called the Meijo Restoration (1868), which officially opened a door for full-fledged modernization. After 700 years, the samurai era was finally over. In the Meiji era, Japan introduced a European political system to some extent, and created its own constitution and congress with the tenno as the head of state.

Given such social backdrops, the Kasei culture was the last breath of the Edo culture and the official endpoint of traditional Japanese culture. Although the Kasei era has some similarity with the wabi-sabi era in that the aesthetics were hugely influenced by a drastic social  change, this time the country did not have to face all-out civil war and subsequent destruction. As the economy was largely kept intact, the Kasei culture saw an almost decadent maturity. It is the Kasei culture that spread to Europe and triggered the frenzy of Japonism, when ukiyo-e painters such as Hokusai, Hiroshige became world famous and added a new dimension to the world of art. 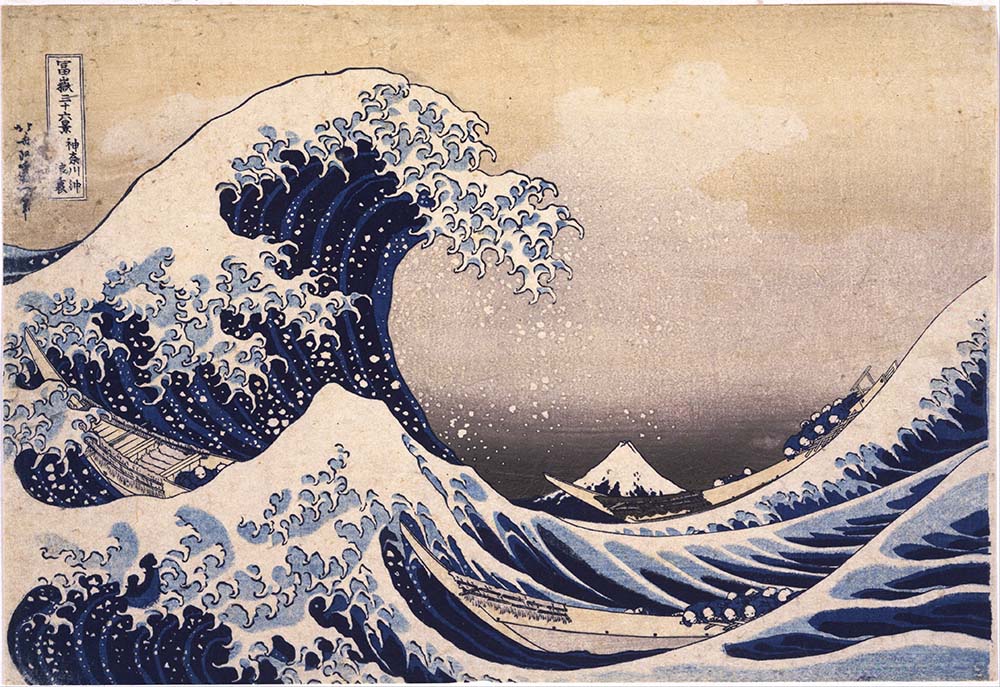 Ukiyo-e by Katsushika Hokusai.
Hoksai’s bold composition and the choice of colors defined ukiyo-e in the world market.

Japanese aesthetics has always found inspiration in simple, minimal and empty elements. In the Middle Ages, aesthetic philosophy was led by Zen resulting in the ultimate abstraction of wabi-sabi, which  developed out of the aestheticism cherished by Kyoto aristocrats in the Classic era. As the economy and society became modernized and more affluent, new metropolis such as Edo and Osaka flourished, and people’s interests shifted to entertainment-oriented, humanism-driven culture. The iki moxie of Edokko was the driving force for a vibrant Edo culture that produced ukiyo-e and kabuki.