The aesthetics of “absence” in Ukiyo-e: Hiroshige’s One Hundred Famous Views of Edo (江戸百景)

Ukiyo-e is not Zen or wabi-sabi, but there are various aesthetic elements that are Zen. For example, it often applies subtraction in order to emphasize focal elements. Hiroshige was especially good at streamlining compositions, maximizing the effects of simple structures/lines to offer soothing yet impactful landscapes. Sometimes the effects were made even more dramatic by highlighting absence. 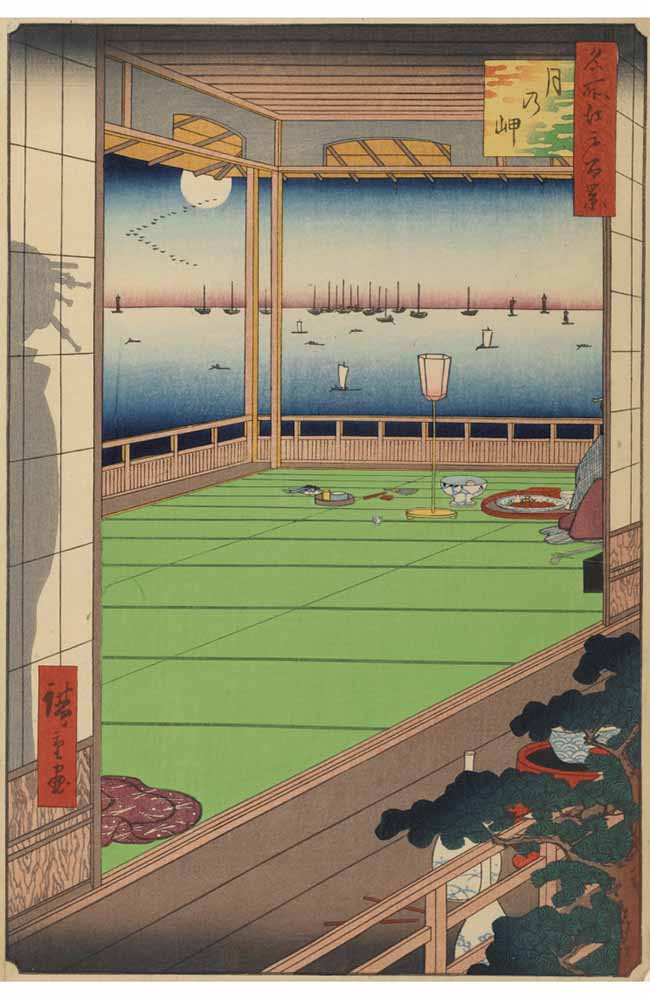 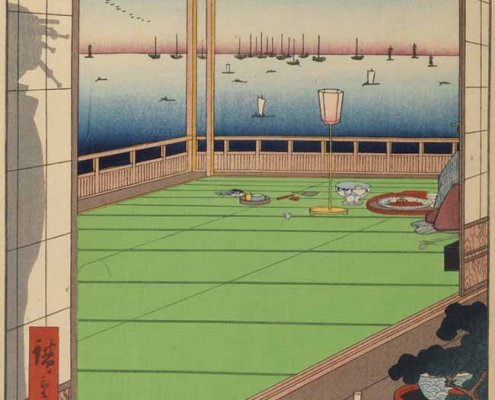 Utagawa H (1857). Moon-viewing Point No.82 from the One Hundred Famous Views of Edo.

“Tsuki-no-misaki” (Point Moon) is part of Hiroshige’s  “One Hundred Famous Views of Edo.”  It is a view of the Moon from a room in a brothel by Tokyo bay.  It looks like the party is over, and you see a woman’s shadow through a Shoji.  We cannot know exactly what’s going on because there is no one in the scene except for the shadow.  We are  torn apart between the expectation or excitement that something may be happening, or a sad feeling that the party is over.  The fact that you cannot decide stirs your imagination.  You are left with this brief moment which can be part of the past, or part of the future. 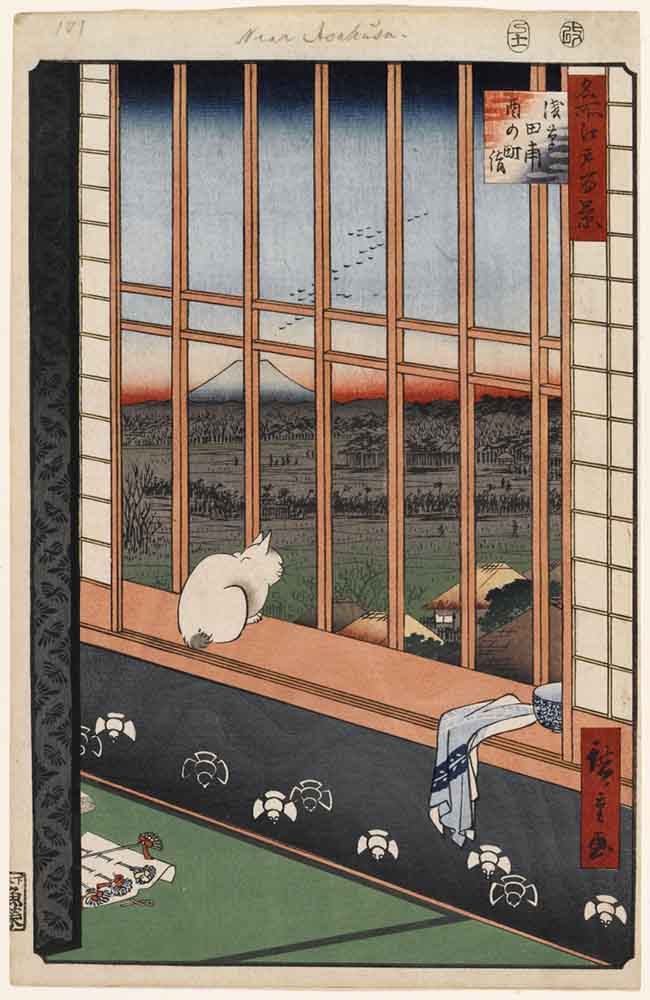 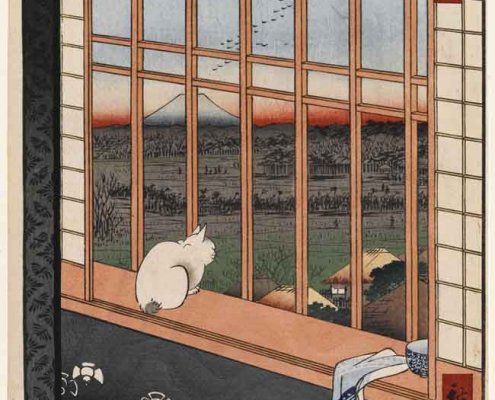 Utagawa H (1857). Asakusa Ricefields and Torinomachi Festival, No. 101 from the One Hundred Famous Views of Edo.

”Asakusa Ricefields and Torinomachi Festival” is also from the “One Hundred Famous View of Edo.” It is a view of Mt. Fuji from a room in a brothel. Again, there is no one in the scene except for a cat. The cat is looking outside, where you can see many people walking to a religious event. The only hint of the owner this room is part of hair accessories by the fusuma door. Maybe there is something going on in this room, but you can only guess. In this small room, the relationship could be something in flux.  Maybe the woman is hoping that her job at a brothel is in flux (back then, they were mostly sold, despite their will, by parents who were too poor to support the family). And outside, mount Fuji looks magnificent and eternal even it’s far away. The cat, in between inside and outside,  doesn’t seem to care. A short moment in this picture captures various elements that flows into different directions. 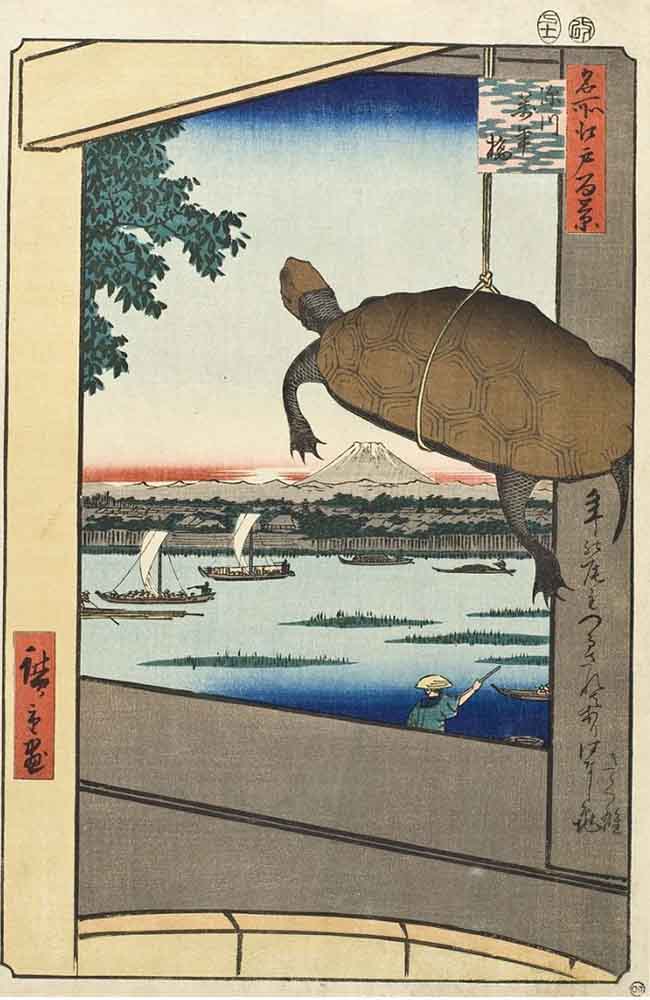 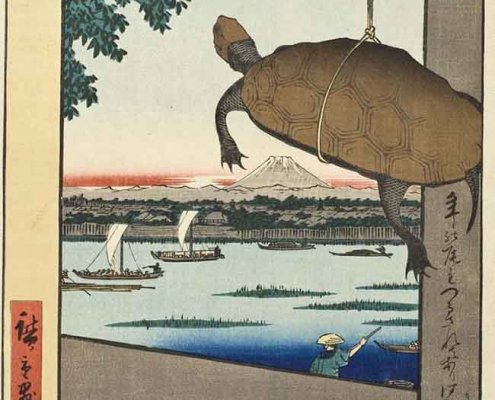 Utagawa H (1857). Mannen Bridge, Fukagawa No. 56 from the One Hundred Famous Views of Edo.

The ”Mannen Bridge, Fukagawa” demonstrates Hiroshige’s talent to capture a scene from an unusual, very bold angle. It captures a scene from an event called “Hojoe,” at which people buy captured animals and release them back into nature. It was a religious event to remind that unnecessary killing wasn’t tolerated.

Someone must have bought a small turtle, and he may be about to throw it back in the river. The picture is framed with the bridge (gray structure), and wooden basket in which the turtle must have been (beige structure). From the opening, you can see Mt. Fuji afar. Like the cat in the picture above, the turtle doesn’t seem to care. However, turtles happen to be a symbol of long life in Eastern Asia; people believed that they could live for 10,000 years.  Magnificent Mt. Fuji, looking small, and small turtle with 10,000 years life looking, big, nonchalant but real. With no people in it, the picture captures a lot about how our world is like.

How to apply Japanese minimalist, Zen design to your home?
Scroll to top