Japanese aesthetics are known for simple and minimalist design details and a unique appreciation of natural beauty.  There have been a couple of decisive moments in history that helped cement those qualities. The “History of Japanese Aesthetics” reviews the social background of the 1). Heian, 2). Kamakura, 3). Muromachi and 4). Edo periods and discusses how these periods affected the formation and crystallization of Japanese aesthetics.

Thanks to the relative social stability brought about by the Tokugawa Dynasty, Edo rapidly grew as a new state capital, in which the commercial and service industries led an economic expansion. The population of 町人 (chonin – emerging working class similar to the petit bourgeois in France in the 18th century) increased, leading Edo’s casual and free-spirited culture which became a significant industry thanks to rapidly advancing manufacturing techniques and commercial activities. Edo culture was diverse, vibrant and entertainment-oriented, reflecting the social atmosphere of a growing metropolis. At the end of its 250-year tenure, the Edo culture became matured and polished like the culture of the Belle Époque era in France. Ukiyo-e and kabuki are the two prime examples of the Edo spirit that took pride in being iki.

The harbinger of the Edo period

After the decisive shogun Ashikaga Yoshimitsu passed away in 1408, the Muromach Bakufu dynasty never recovered its previous strength. Regional samurai leaders in different parts of the county – some climbed up the ladder from the lower class by disrupting conventional rules – became increasingly powerful threatening the Ashikaga’s reign. By the 16th century, the country was in an all-out civil war mode (戦国時代- the Sengoku Era, or “Age of Warring States”) as ambitious leaders fought to become the new ruler. After brief stints by Oda Nobunaga and Toyotomi Hideyoshi, who grabbed the power by winning a series of battles, Tokugawa Ieyasu, a cunning, Machiavellian leader from the East, craftily swept the board by winning the crucial Battle of Sekigahara in 1600. It founded the Tokugawa Dynasty (1603-1868) that lasted for the next 250 years. The sphere of influence of the Tokugawa shogun was very close to the current border; it controlled wide areas of Japan by dividing them into 200-300 provinces, each of which was ruled by a daimyo; a regional samurai leader. Some were favored by the Tokugawa to play important roles in the administration, while others were considered adversaries and oppressed. Helped by a tactically-designed balance of power among provinces, the Tokugawa dynasty managed to stay stable and expanded its economy, which started looking like a modern system with a variety of emerging industries and intricately connected commercial/financial/logistic networks. Full-fledged urban areas (consumption centers) emerged, in which new kind of culture flourished. 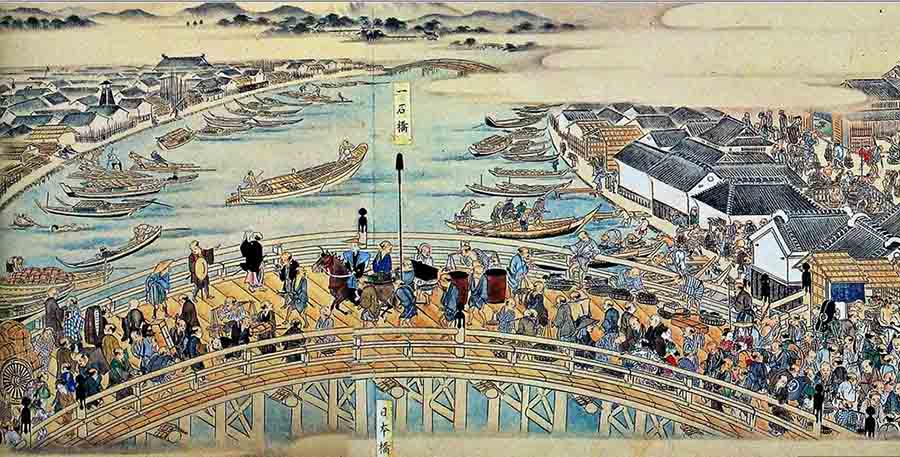 The four stages of Edo culture

The emergence of the Tokugawa Bakufu Dynasty made huge impacts on arts and culture because it brought about completely different background from previous periods in some critical ways:

If you thought that “traditional Japanese aesthetics” was one coherent endeavor in a small country, the Kyoto – Edo divide was as significant as the East – West Coast divide. If Kyoto-ism was about the establishment, the Edo culture exhibited some aspects similar to today’s pop culture.

Since the Edo era was long, it’s usually divided into three to four different periods to capture the evolution of its culture/art. Kyoto’s influence was strong in the early days, but Edo gradually cemented its own identity.

This article reviews the first half of the Edo culture: the Kanei and Genroku culture. But note that the Edo culture is much more diverse than what’s covered here.

In the early Edo period, Kyoto remained the center of cultural actives, supported by the artists and patrons who took pride in their tradition and heritage. Determined not to yield to Edo-ism, they advanced Zen-influenced culture to a new level of refinement. One such elevation can be seen in “綺麗さび (kirei-sabi)” aesthetics advocated by 小堀遠州 (Kobori Enshu, 1579-1647), who was one of the daimyos representing a province near Kyoto. As “kirei” means clean, elegant and beautiful, its link to “wabi” sounds contradictory at face value because “wabi” is about embracing apparently negative qualities such as decay or imperfection (read more about wabi-sabi). But Enshu not only combined those qualities but also elevated the output to a new level by leveraging his aesthetic genius and political influence as a daimyo. Also reflecting the increasingly stable and affluent social background, Enshu successfully married the pure-aestheticism pursued by his creative idol Fujiwara Teika (who created French symbolism-like waka in the 12th century – read Chapter 1 of the series) with wabi-cha (wabi-tea) (Read Chapter 3) by adding design elements that were clean, high quality and elegant. You definitely see the early manifestation of modernism in Enshu.

As a tea master, he designed many tea rooms/tea huts, some of which survive to this day. You may have noticed that Enshu’s tea rooms celebrated abundant light (conventional tea rooms embraced dim, subdued light) while emphasizing fine yet bold lines as important design elements to leave clean and neat impression.

Built during the 17th century, the Katsura Rikyu is considered the culmination of traditional Japanese architecture that focused on simplicity and harmony with surrounding nature. Although there is no clear evidence, there is a theory that Enshu helped design the Katsura Rikyu (a villa retreat for a Kyoto aristocratic family) despite the fact that his patron was the Tokugawa dynasty. It’s still Zen at heart, but certain design details are well-thought out and delicately balanced with a hint of modernism suggesting the influence of Enshu.

As the economy kept growing, various industries expanded. Regional production centers for different products were connected with urban areas such as Edo, into which rural peasants flocked to form a new working class, helping the commercial/service industries to flourish. You can see that full-fledged modernization started during the Genroku period. In the West, Osaka – the largest hub for trade, only 60km from Kyoto – emerged as the epicenter of arts and culture, while Edo started fostering its own style.

The economic/social change during the Genroku triggered one of the biggest changes in Japanese culture; the main audience shifted from the upper class such as the aristocrats to ordinary people. For the first time in history, the general public, not aristocrats or Zen priests with intellectual backgrounds, was the impetus for new artistic creation. The Genroku is often regarded as the period of exciting growth that produced a vibrant and energetic culture for people.

The Emergence of Performing Arts

Performing arts are, in a sense, a modern entertainment, since they require a certain population concentration, and the advanced architecture needed for large theaters and a diverse audience who can understand contemporary themes and stories. During the Genroku era, several types of performing arts won people’s hearts by focusing on topics that felt familiar to them, such as romance (often with tragic endings), the hero’s journey or unsung heroes. 浄瑠璃 (Joruri) had a storyteller (narrator) and performers (which were often craftily-created puppets) and became widely successful. Joruri also produced Chikamatsu Monzaemon, a very successful playwright whose works are still performed to this day. Kabuki also cemented its foundation and started becoming a major entertainment during Genroku. In the meantime, Noh theater, which we reviewed in the chapter 3, was incorporated by the Bakufu administration as an “official” performing art.

Joruri (Bunkaku) puppet theater.
Like Kabuki and Noh, it is still performed today. But unlike Kabuki that represents Edo culture, bunraku flourished in Osaka.

It is also notable that the Edo encouraged a high literacy rate. Various types of block-printed books became popular among people that focused on the excitement or fun associated with people’s everyday lives, driven by desires such as adventure, romance, humor or satire. 井原西鶴 (Ihara Saikaku, 1642-1693) wrote “好色一代男 (Koshoku ichiai otoko),” which became one of the best-selling books during the era that vividly chronicled a sexual life of a free-spirited man who only cared about women. (You can see how free and open-minded Edo people were.)

In addition, waka and renga, the authentic Japanese poetry practiced by the upper classes such as Kyoto aristocrats, became popularized for the ordinary people to become haikai. The mainstream haikai became increasingly entertainment-oriented, but other groups resisted such trends. Matsuo Basho (1644-1694) emerged from the latter group to elevate haikai to a new artistic endeavor, creating the foundations of what we know today as the haiku.

Basho was born in the West but later moved to Edo, the epicenter of haikai. Increasingly disillusioned by the game-oriented, commercialized, haikai society, he started distancing himself from it to find beauty in a quiet, solitary and wabi-sabi life style. As haikai poets made a living by traveling and teaching local patrons how to write haikai, Basho traveled a lot. He left behind both masterpiece essays such as “Oku no Hosomich” and haiku poems. People today still recite Basho’s works. 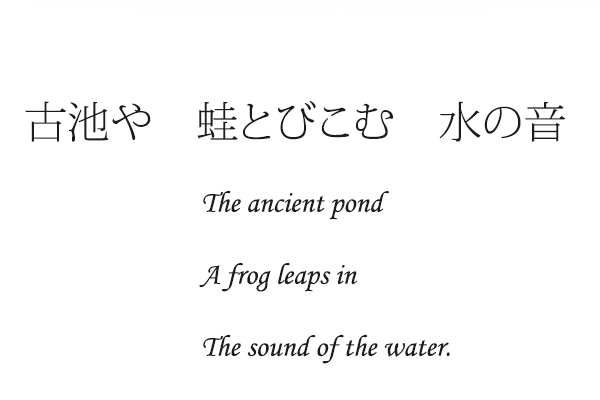 This is one of Basho’s most famous haiku. The first line only tell you the existence of an old pond. The second line has the seasonal word and the main character “frog.” Frog is a seasonal word for spring, because it’s when it comes back to our world after hibernation. Due to its humid climate, there are a variety of frog species in Japan from big to small, but the frog in this haiku is believed to be a small one.  It is revealed that the small frog jumps into the water. That is all in the 17 syllables. It gives no further description, leaving abundant room for the readers to picture the scene relying only on their own imagination. You are next to a small pond, probably abandoned or forgotten. There’s no one around, and you are surrounded by utter silence. You start losing the sense of time dissolving in isolated nature. But suddenly, here comes a small frog that makes a small sound by jumping into the water. Although it is a very small sound, you can hear it so clearly because of the tranquility that reigns around the scene where nothing else moves. What a solitude! This is the vastness of nature.

Basho kept traveling, pursuing his artistic endeavors which focused on finding universal beauty in daily lives and surrounding nature by carefully avoiding becoming too casual nor too sophisticated.

In the field of design, modernism was coming. Artists weren’t afraid of experimenting bold choices of colors, compositions or accentuation.

Mikaeri Bininzu by Hishikawa Moronobu (1618-1694)
Moronobu is considered the founder of the Ukiyo-e. He elevated the snapshots of random beautiful ladies into artistic pieces by introducing bold compositions and carefully captured details.

Top: the Kohaku Baizu Byobu
Bottom: Waves of Matsushima
by Okata Korin (1658-1716)
Korin was born into an affluent merchant family in Kyoto, and led an extravagant life style. His works focused on bold design elements which influenced industrial design as well as painting.