Flowers have always been playing important roles in Japanese culture. Ancient Japanese thought that flowers represented the power of living things that grow absorbing the energy provided by the Sun. Plants are probably the largest source of wonderful colors in nature, so it’s very likely that people have had keen interest in flowers.

The earliest records of flower arrangement are found in Buddhism rituals after it was first introduced to Japan in 6th century. Buddhism uses carefully designed alters for rituals, and flowers often accompanied them. By the Middle Ages, flowers in a vase had became one of the three essential components for Buddhism alters. 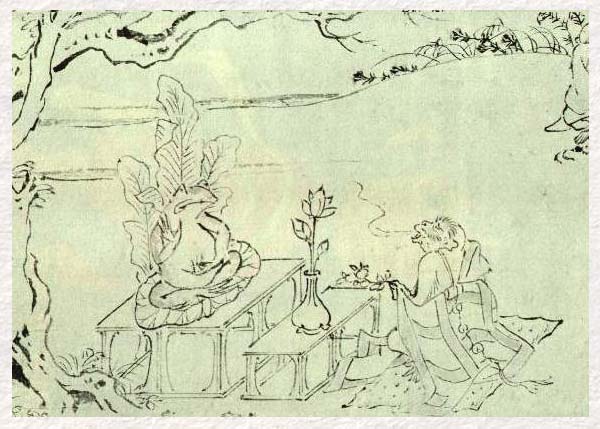 Choju Giga , a “cartoon” in the Middle Ages (12~13th century), describing a service with alters.   A flower base is present. Public domain (PD-Japan-oldphoto)

As seen in the picture, ritual flower arrangements typically used a tall, narrow vase (introduced from China). To fit in it, the main flower had to be single that stood straight (it was supposed to represent Buddha, or the power of plants growing upward). Lower, smaller flowers supported it, adding some mass at the bottom.

In the meantime, architecture made progress during the Middle Ages.  Social elites started to live in so-called “Shoin-zukuri” mansion that had dedicated spaces called Toko-no-ma in guest rooms to display aesthetic potteries, calligraphy (often imported from China) and flowers in a vase. The flower arrangements in Toko-no-ma were based on the structure used for Buddhism rituals, consisting of Shin (main flower that stands straight) and Shitakusa (low/small plants that cover the bottom).  The style was called “tate-hana (standing flowers).”  Since flowers were supposed to be in harmony with other decorative items, specific positions and styles were developed. 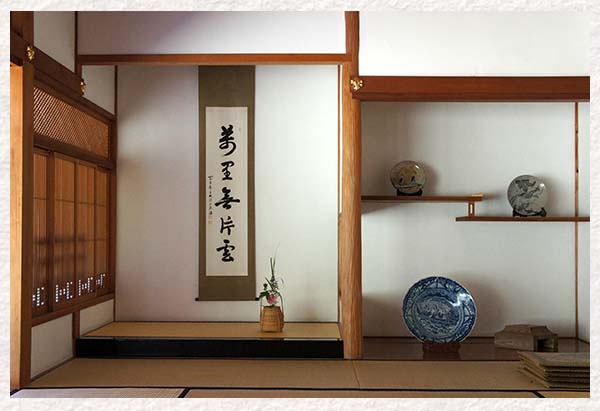 Toko-no-ma style. It typically comes with raised area where a flower vase and kakejiku (drawing or calligraphy) are displayed. Kannon-in in Tottori, Tottori prefecture, Japan, by 663highland

It is believed that the current Ikebana style was established in 1462, when Ikenobo Senkei, the Zen monk (who managed Rokkaku-do Zen temple in Kyoto) was called by military elites to offer his skills to arrange flowers for them.  He was the pioneer to elevate flower arrangements from ritual style into refined form of art.

Senkei appears in a journal written by one of the other monks in 1462.  It records the frenzy surrounding Senkei, stating that his skills gained an instant fame and that people from every part of Kyoto (the then-capital of Japan) came to see his work.

Ever since, Ikabana has been developing its theories, methods and artistic qualities further refining and improving tate-hana style. The largest school in Ikabana is Ikenobo, which was started by Ikenobo Senkei. Current Ikenobo Headmaster is the 45th in line.

In the 16th century, Ikebana was further enhanced by Ikenobo Sen-noh (1482-1543), who established the theories for tate-hana style (which was later called rikka style). Sen-koh succeeded Sen-noh, and by the time of Sen-koh, tate-hana with Shin and Shitakusa was further defined to have seven flowers with different roles.

This website has great pictures of tate-hana style provided by Ikenobo (it’s in Japanese. sorry!).
Ikenobo website also covers the history of Ikebana.
Until more contents are added as part of paid subscription, enjoy it.

One of the most important remarks Sen-noh made is the purpose of Ikebana. He advocated that the gist of Ikebana was to let true nature emerge through it, not to reap many flamboyant flowers. He insisted that even dead branches would work to express the state of nature.

After Sen-noh period, there were times when Ikebana became bigger, more gorgeous and flamboyant. However, after more than 500 years from its origin, what crystallized was not the flamboyant side of Ikebana. It was the Zero side — the belief that the true beauty of nature would only emerge after all the frills and excesses were subtracted.

Bonsai: condensation of nature for your palm
Scroll to top