Back to Chapter 2: Abundance by subtraction

The current form of ikebana (the traditional art of Japanese flower arrangement) cemented its reputation in the 15th century when Ikenobo Senkei, a prominent Zen priest, elevated the traditional style to an established form of art. Ever since, ikebana continued evolving primarily as the Ikenobo school, supported by the social elites such as military leaders and aristocrats who decorated their mansions and events with “rikka (立花)” style ikebana.

As time passed, the shoka (“生花”) style became popular during the late Edo ~ Meiji era (19th ~ early 20th century). Shoka was compact, light and suitable for smaller private homes in contrast with the more complex and larger rikka, which was often used to celebrate people in power. The shoka style effectively represents the aesthetics of subtraction.

“Shoka” means “living flowers” and as the name suggests, shoka expresses the power of plants that are coming into life, and celebrates their beauty in the natural environment. The basic shoka/ikebana format is a scalene triangle. The longest side (“真” – shin) represents the sky, the shortest (“副”- soe) represents the earth, and the middle one (“体” –tai) represents us, humanity. The sky, the earth and humanity are the three fundamental metaphysical elements that comprise everything in the universe according to ancient Chinese philosophy. 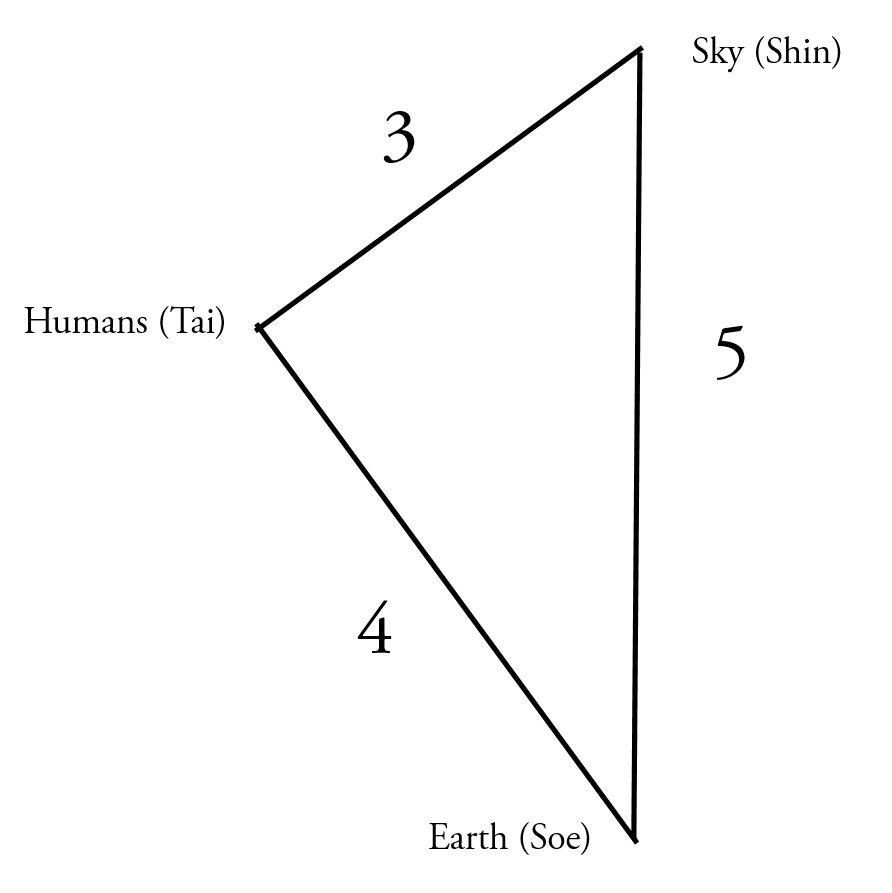 Because these three elements represent the entire world, nothing else needs to be added.  And sincebalance is very important in ikebana, nothing excessive is allowed. This is the ultimate essential.


Not only does ikebana subtract the number of flowers or colors; it also reduces physical presence to the minimum. The triangle created by the three elements, which is visible and tangible, is not everything ikebana has to offer. It implicitly forms a complete circle by assuming an invisible triangle next to the visible one. Based on the philosophy of “陰陽” (yin and yang, or pronounced in-yo in Japanese), ikebana assumes that there is a bright side and a dark side for  everything on Earth. You have to have both to express the full beauty/truth of nature. The invisible triangle complements the visible one to form a full circle.

Ikebana fully embraces the ying-yang philosophy. For example, it finds ying and yang even in each leaf. The leaf’s surface faces the sun, receiving the sunlight needed to grow (yin). The underside does not face the sun but it is still is an essential part for the leaf (yang). When you choose each stem for ikebana, you have to take a thorough look at it to understand how the opposing elements, the ying and yang, reside in it in harmony; based on which you’ll decide the the angle, the tilt, the bend or the linings of flowers and leaves. While each stem has to represent ying-yang on its own, it also has to be part of the larger ying-yang equilibrium embraced by the entire triangle.

In a triangle, “shin” points towards the sky or where the energy comes from. But it is slightly tilted. It represents living organisms’ desire towards “yin,” but also their strength to grow straight. “Soe,” which represents “yin,” is the Earth that counterbalances “shin” – the sky. “Tai” grows from “soe” to represent “yang,” demonstrating living organisms’ energy to come to life.

When you apply subtraction in ikebana, each action has a meaning. It is a process to dig deep into the truth of nature and to recreate its essence in a concentrated way by removing any potential contaminants. The more you subtract, the deeper the truth you are revealing.

It is a painstaking process both philosophically and aesthetically. Even a small mistake or carelessness can make the outcome plain, boring, sad or miserable.  It’s not a coincidence that the foundation of ikebana was created by one of the most dedicated Zen priests. Zen priests persevered through relentless training and meditation which often occurred at the heart of the mountains or by waterfalls. Dissolving deep into the wilderness, they kept stripping off layers of superfluous or non-essential elements until they became “empty” to reach “kuu.” At the end of such endeavors emerged boundless beauty from minimum essential elements. Ikebana is one of the major Zen arts that expresses the beauty of emptiness.

Subtraction, through sincere interaction with nature, elevates and intensifies the significance of aesthetic elements. It is so powerful. And this is also true of a haiku, world’s shortest poem.

Learn more about ikebana
Next: Chapter 2-3 Haiku
Back to Chapter 2: Abundance by subtraction

Chapter 1-3: What is satisfaction?