Haruomi Hosono: what it means to be a super adept Japanese musician

Versatile Japanese musician/producer Haruomi Hosono was born in 1947 in central Tokyo, only 2 years after Japan lost WWII that threw the country into a complete turmoil and devastation. As the war bitterly reminded Japanese people how behind they were in the face of the technologically/economically mighty America, Japan’s post-war revitalization efforts became almost equal to aggressive modernization and Americanization. Hosono’s music career coincided with Japan’s new chapter of music, which was also about modernization and Americanization.

When modern pop music suddenly started pouring into Japan from America after 1945, young people went wild and fell love in it because it was so new and sounded cool. Like a starved child gulping down whatever food in front of him, Japanese hungrily ingested pop, rock’n’ roll, surf rock (and electric guitar), jazz/blues/soul and so forth. But they didn’t stop there, and started looking beyond the mainland US: from Hawaiian, Jamaican Reggae, Brazilian samba/Bossa nova to French chansons or Balinese gamelan, Japanese accepted a variety of music styles and studied them intently and enthusiastically. If anything makes Japanese music industry different, it should be this gastronomic energy to devour foreign materials.

Such an attitude to accept foreign cultures without much presumption was not limited to music, and actually was what made Japanese culture unique. Kenya Hara, one of the most widely respected designers explain it in his book “Designing design.” (Note that Hara uses “Tokyo” as a symbol that represents concentrated intellectual energy/curiosity in Japan.)

Tokyo is a highly curious/gastronomic city. It eagerly gobbles up every bit of information from other cultures, then devours/digests it studiously. Tokyoites are so determined not to miss any beautiful/cool things outside the country that they fully mobilize their intellectual ability in order to capture as much as they can.

But then, a question arises: how are you going define yourself after you’ve accepted so many different cultures? What is your identity? This was especially a difficult problem for post-war Japanese musicians because the orderly and beat-oriented Western music theory was almost the opposite of traditional Japanese music, whose scales, voicing, chords and rhythms were much more fluid, spontaneous and ambiguous. Traditional Japanese songs were often, slow, mellow and quiet with no explicit climax and not dance-able. How do you reconcile such a big gap??

To find the answer, let’s go back to Hara’s “Designing Design.” Hara observes that Japanese had established a method to digest massive amount of cultural information from outside and produce outputs that were uniquely Japanese. And the secret was its geographical location. Referring to a book “世界地図の読み方 (how to read the world map)” written by Hajime Takano, Hara explains that Japan had been at the bottom of a cultural funnel system through which a wide variety of cultural essences flowed toward Japan. It was too natural for Japanese to receive/accept them. It becomes super intuitive when you tilt the world map at 90 degrees angle and start from probably 800 BC. 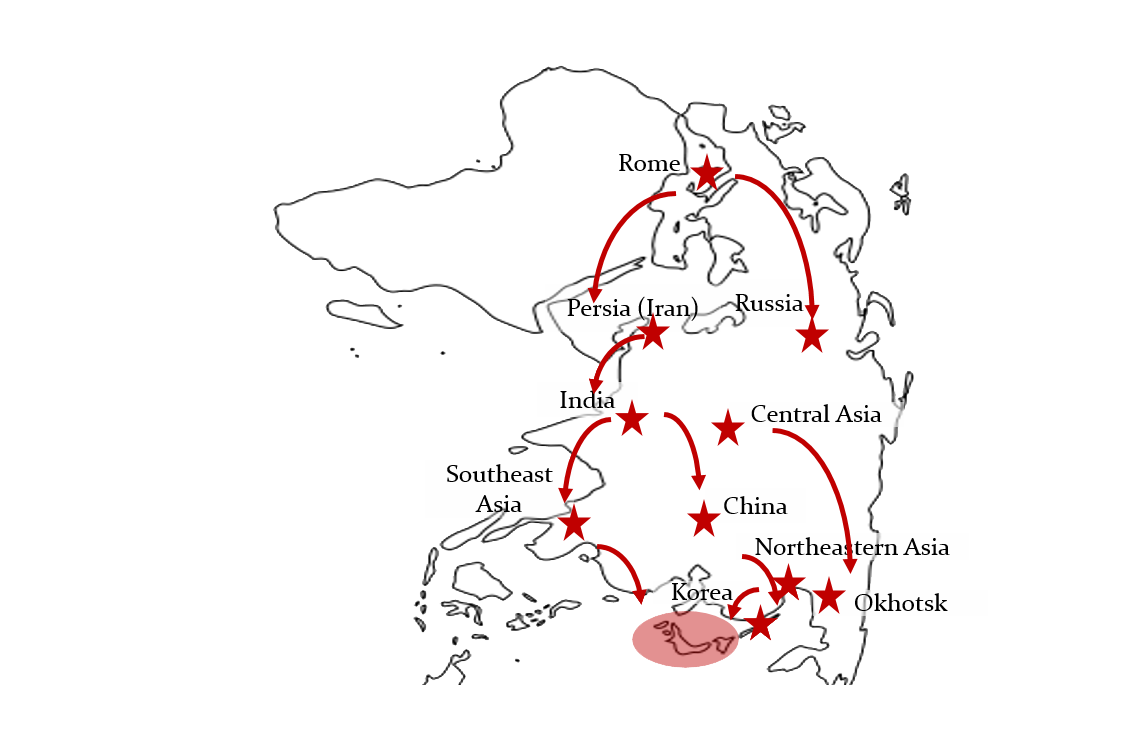 If Japan was at the “terminal” of cultural journeys, it was a lot to information to process and accept, and it’s exactly what their young generations, including Hosono’s generation did with pop music after 1945. 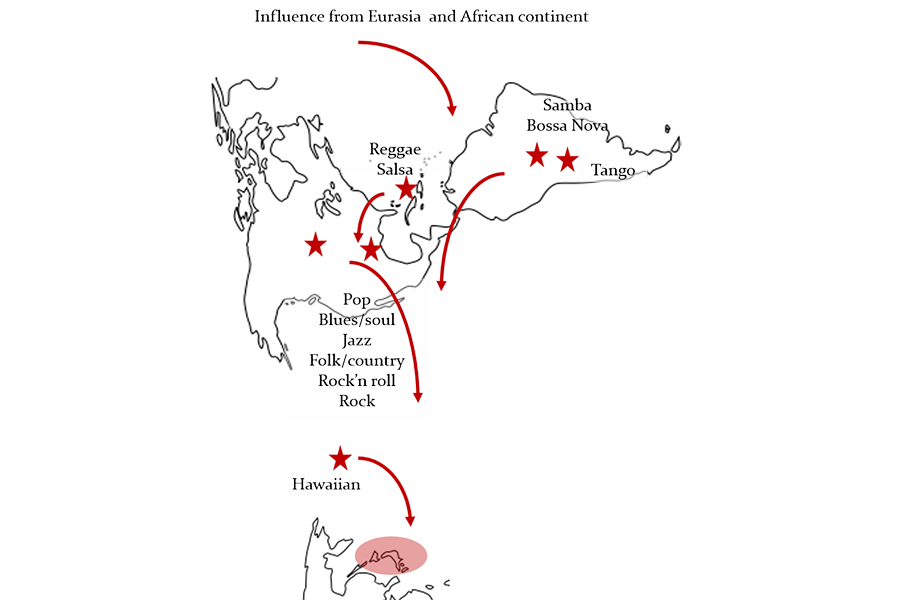 In addition to the underlying culture that accumulated foreign aesthetics for thousands of years, Hosono’s generation also accepted all kinds of music that came via America.

Japanese have been taking in enormous amount of cultural information for thousands of years. There must have been the Copernican Revolution to digest such an intense cultural diversity and distill its own aesthetics, Hara observes. And the revolution Japanese came up was something you would never expect.

After accepting different perspectives, concepts and styles, Japanese first fused them and created chaotic melting pots. Then finally, they elevated them to an ultimate hybridization, which was “nothingness.” In order to perform a difficult task to accept all kinds of colorful things and process resulting complex blends, Japanese chose to transform them to absolute white. As counter-intuitive as it may sound, that was how they crystallized ultimate-simple Japanese aesthetics and produced Zen-influenced “wabi-sabi” culture.

Although Hosono doesn’t do “wabi-sabi,” Hara’s narrative perfectly explains Hosono’s career, which is highlighted by his unique musical intellect that covered all kinds of music from East to West, old to new and, and last but not least, wide range of technology that supported the evolution of modern music. He has been the go-to resource for other musicians and music fans who wished to dig deep in the profound world of music.

It makes perfect sense that he later advocated “観光音楽 (tourism music),” because he himself has been an outstanding/incomparable tour guide of the music worldwide. For example, in an album titled “Omni Sightseeing” released in 1989, Hosono stewed the wide variety of musical style from and produced outputs that were so curiously hotchpotch yet uniquely him. Although you could easily sense not only techno or ambient music he is usually associated with, but also trad jazz, middle eastern music, exotica and acid jazz, the production didn’t belong to any of those.

After methodically absorbing enormous amount of music and its associated details, if was as if Hosono disassembled and dismantled them, stripped away any meanings and produced something that was so minimal, fundamental and universal. If his music is accepted by music fans around the world, it may be because more people are realizing the richness of his creation. If you flip his funnel system, you can explore so much elements!