Yakushima is a small, rainy and mountainous island, in Southern Japan, where thousand-year-old Yakusugi (cedar) grow at high elevations. Another Hayao Miyazaki’s masterpiece, “Spirited Away,” got its inspiration from Yakushima. Image by 8 og [CC BY 2.0] via Flickr Creative Commons

A long time ago, when humans had few technologies to overcome the power of nature, they used to live the narrative given by nature.

Such narratives had gods in each natural element and phenomenon, such as the Sun, the moon, sea, thunder, mountains, wind, trees, birth and death.

Today, we are capable of seeing nature through the lens of science and technology.  Overwhelming and paralyzing nature receded, and mythological gods, that used to live next to us in thick woods or in the sky, are almost extinct.  And humans often talk their own narrative when we relate with nature.  It’s the form of nature from humans’ perspective.  It’s the nature we want to see, and we can feel good about.

Nature is beautiful and a blessing.

“but it can also be damaging, scary, smelly, grim or dirty.”

Children are pure, with a good heart, and loving.

“but they can also be mean, violent, chaotic and irrational.”

Animals are innocent, cute, cuddly and can be our great partner, when we try to be nice to them.

“but they can be savage, cruel and may not care about humans.”

Whether consciously or unconscionably, our narratives often remove the dark side of nature, and resolve it to “meaningful” endings – from a humans’ perspective.  The dark side of nature is either ignored as non-existent, or is used in order to emphasize meaningful endings, in which light = good prevails.  In such narratives, nature, children (natural side of humans) and animals (existences that connect nature and humans) can all come to a mutually constructive conclusion, based on “common” virtues and love.

It is often the message we want to hear, and want to deliver to our children: nature will side with you, if you have a good and kind heart, are hard working, determined and brave.  This is the narrative we glue on the face of nature.

But Hayao Miyazaki, the Japanese cartoon film director who created many great movies for kids, including “Spirited Away,” “Princess Mononoke,” “Nausicaa,” “Ponyo” along with “My Neighbor Totoro,” doesn’t seem to be interested in such man-made narratives.  It is very interesting considering he is the one who’s been persistently generating beautiful stories between children and nature, and inspiring so many enthusiastic fans around the world.

While a man-made narrative is empowering and “delicious” to consume, there is one problem: it is “artificial.” It may not be how nature actually works.  Deep in our genes, we still remember the true face of nature.  When we pretend that the dark side of nature does not exist, or can be contained by goodwill, we end up feeling: “wait, is this how it’s supposed to be?” Or, “I feel like something is missing.”

In reality, nature could destroy our lives.  The decomposition process is smelly and ugly.  Children can be mean and cruel for no reason.  And many animals don’t care about humans, because they are too busy surviving in harsh nature.

Miyazaki knows how to deal with these “dark” elements of nature in his movies.  Actually, he does not think they are “dark:” it’s simply how nature works, according to him.  Nature does not have, or require, a value system: things exist because they exist.  There is nothing more to it.  That is the reason why ancient mythologies, throughout the world, found gods in almost every natural element.  At the end of the day, “dark” things are dark only from a humans’ perspective.

Having said that, Miyazaki’s movies are not filled with scary, harsh and cruel stories – it’s actually the opposite.  How does he embrace the dark side of nature in such a warm and inspiring way?  The answer may be very simple.  Be HONEST to nature.

…You could say that darkness is the opposite of light, and darkness is negative whereas light is positive. But I don’t buy such simplistic dualism…For Japanese, gods live in the darkness. Sometimes they come to the light, but they mostly hide somewhere in the thick of the forest, or deep in the mountain…the whole thing is eerie, uncanny and frightening… You feel and know that there is “something” in the thick of forest.  You don’t know exactly what it is, but you know there’s something. That is awe, that’s respect to nature.  (Translator note: “god” in Japanese is closer to mythological gods who represent natural elements.)

This world does not exist only for humans.  I am skeptical about the idea to “preserve forests,” when it’s promoted by economic efficiency theory that claims such actions will eventually benefit humans.  I am not persuaded that’s how nature should be regarded.  We have some darkness in our mind, and it’s somehow connected to the dark side of the forests.  If we eliminate such darkness from our forests, we could lose our own darkness.  I think it will make our existence very shallow.


Totoro never returns the umbrella Satsuki let him use… it shouldn’t occur to Totoro: “hey I need to return this to her.” It’s the thinking of humans, but not Totoro’s.  Plus, why would Totoro mind getting wet from rain?  Rain helps plants to grow, and Totoro is a ghost (spirit) of the forest…He simply enjoyed the sound raindrops made, but he never thought that he’d have to give the umbrella back to Satsuki.

Totoro is helping Satsuki and Mei by just being there. When Mei got lost, Totoro arranged Cat-bus for Satsuki, but never went with her.  I felt strongly that he shouldn’t go with her…Totoro is there, and that should be enough.

When Satsuki and Mei find out that their mom couldn’t be released from the hospital to spend the weekend with them as planned, they feel so disappointed.  When they come home, they cry, they try to play but they somehow fall asleep on the floor…they just ended up closing their eyes in a vacant room with no pillows, nor blankets…and that’s how I think I survived a similarly sad situation when I was their age.  I like the scene a lot because I felt I could still “smell” how kids could deal with an enormous amount of pain, in a natural state. 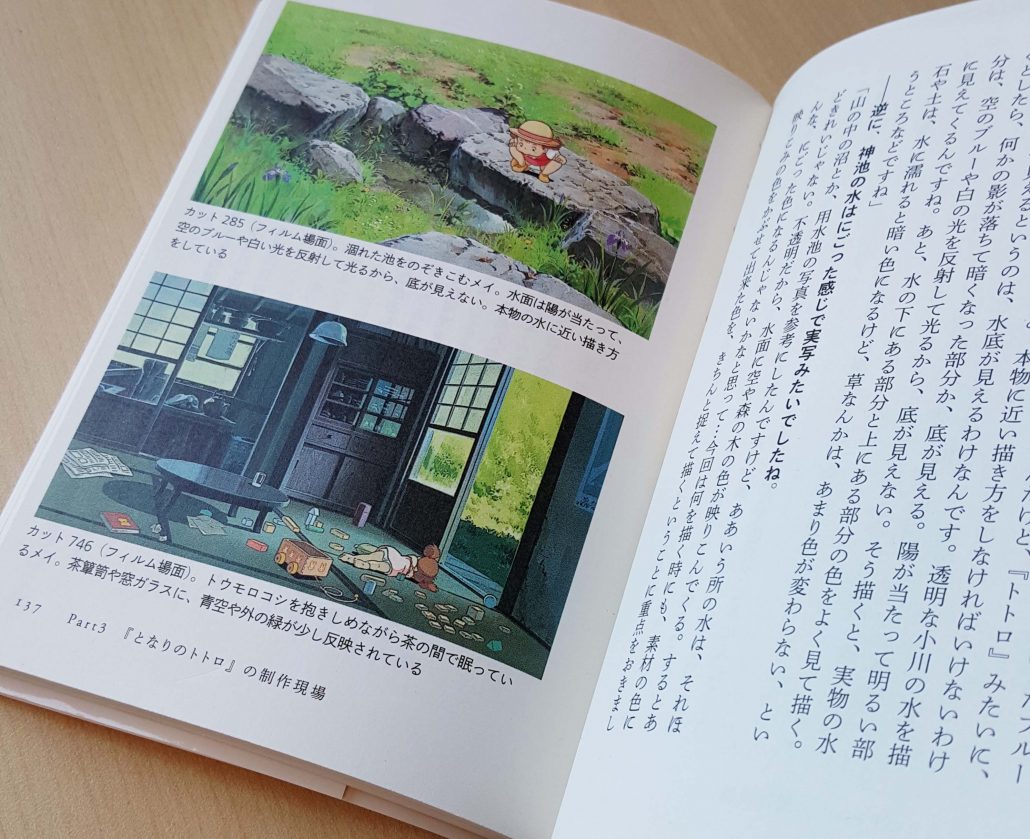 From “Ghibli’s textbook 3: My Neighbor Totoro.”  Mei fell asleep on the floor, feeling sad that she couldn’t get together with her mom anytime soon.

More on zero and culture