We tend to assume that architecture has specific, fixed purposes; houses are for living, offices are for working, and museums and stadiums are for entertainment.  And architects are highly capable professionals who can design sophisticated and functional buildings that maximize the experiences that happen inside.

But Toyo Ito, the Pritzker Prize winning Japanese architect, seems to have a different approach.  He is more interested in reversing this approach and letting behaviors or phenomena define architecture, instead of letting architecture dictate what kind of activities should happening inside. In other words, he seems to architecturize things that are inherently “in-architecturize-able” – matters that are free, organic, and fluid that keep evolving.

At “The Japanese House” exhibition, you can see how Ito’s attempts have evolved since the 70’s by constantly questioning what it means to live in a modernized environment.  Keep in mind that these houses are all located in Tokyo, which symbolizes one of the most extreme forms of urbanization – the artificial, cyber metropolis you may remember from movies such as “Brazil” (1985) or “Cars 2” (2011), where people seem to be reduced to a mass of androids. 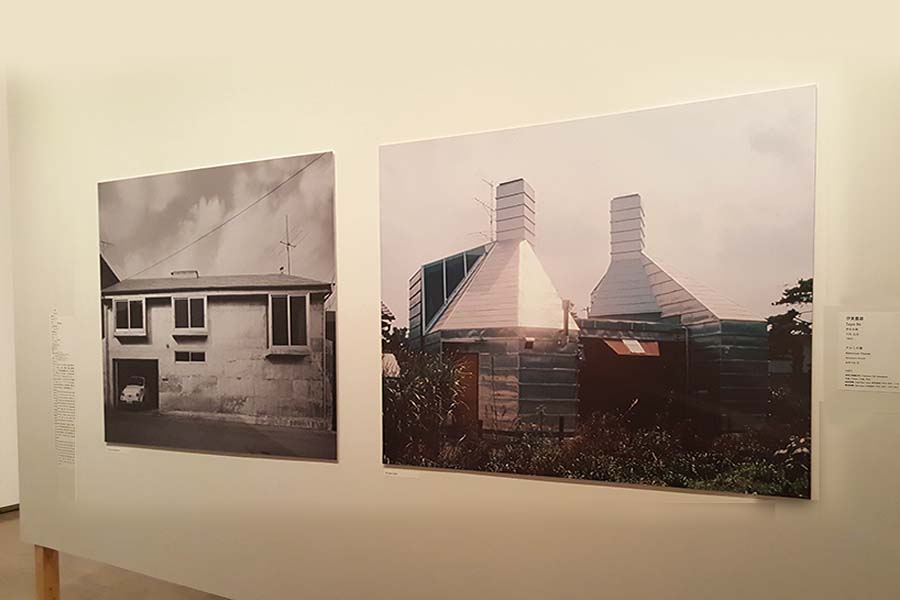 Right: “Aluminum House” designed by Toyo Ito.
Left: Machiya in Minase designed by Kazunari Sakamoto, with whom Ito led the Japanese architectural new wave in the 70’s and 80’s.

The “Aluminum House” was Ito’s first project, completed in 1971, when he was 31 years old.  It’s amazing that even 50 years ago, Ito attempted to let futuristic, industrial material (aluminum) collide with our rustic heritage (the hut or silo-looking house design).  When this house was conceived, Tokyo was in the middle of a frenzied and rapid transformation from a pre-modern, paternal-authoritarian society to one of the worlds’ most engineered, “sci-fi”-looking cities.

Ito chose aluminum as the most “organic” option among artificial/industrial materials which, by the 70’s, were dominating big cities.  Central Tokyo was literally on the way to becoming a concrete jungle. Compared to forceful, overwhelming and irreversible concrete or steel, aluminum retains a certain fluidity or dualism that compares to an organic material. It is modifiable/editable because it is light, tensile and conductive.  Depending on how it’s processed, it can look bright or dull, it can become hot or cold, it can be reflective or transformed to be semi-opaque.

If nothing can stop rapid modernization boosted by ever-advancing technology, how can humans react to it? How will our bodies, senses, mindset and long-standing heritage stored in our genes find a place in a dominantly inorganic, static and non-interactive environment?  The Aluminum Hut was an experiment to find an “organic” way of living in an increasingly un-human society. 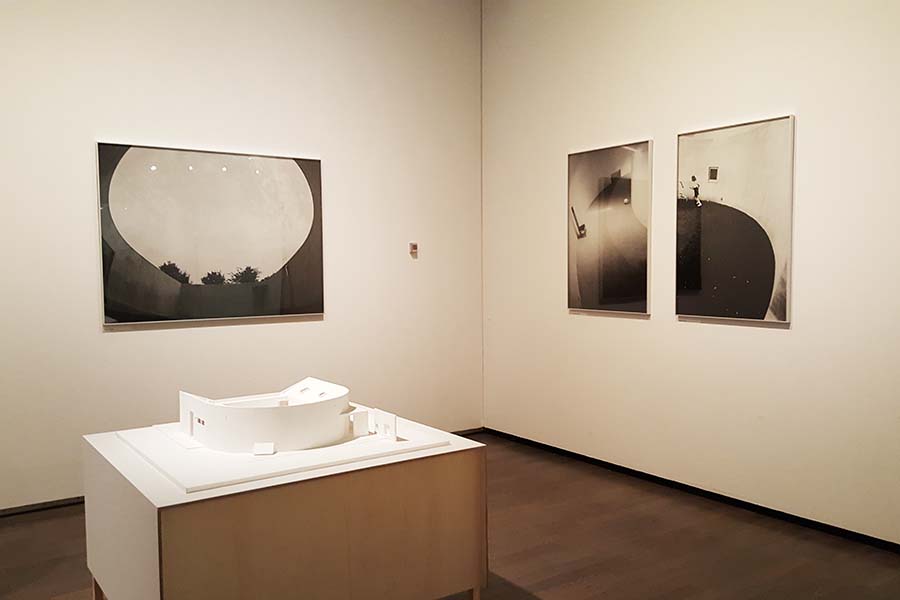 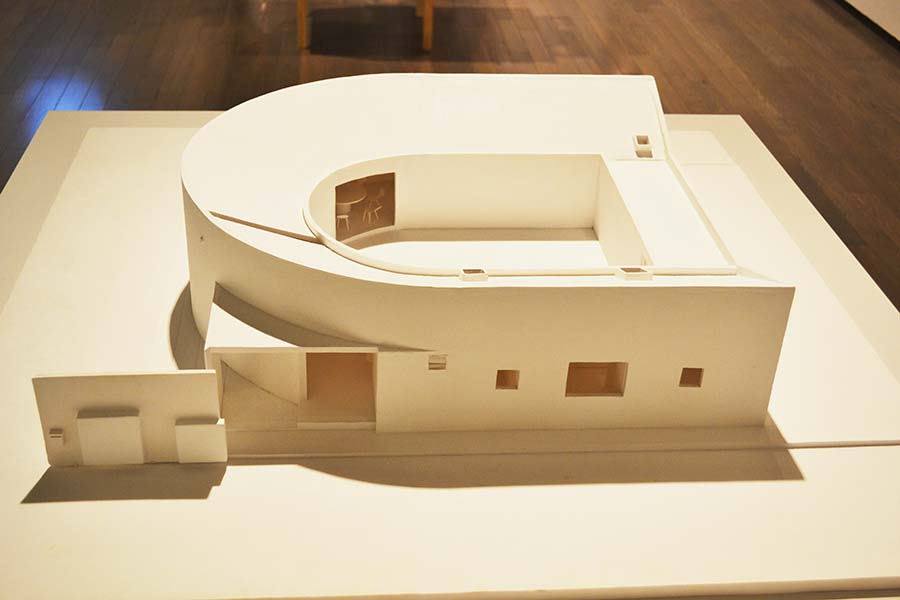 The “White U” is a U-shaped house that surrounds a patio.
Left: From the patio, the sky looks like a large moon. The photograph on the wall shows the owner’s daughter running along the curve.

The “White U” was built in 1976 for Ito’s widowed sister and her two young daughters.  As the name suggests, it is a U-shaped house that has a patio at the center. When he designed this house, Ito remembers, “I was interested only in interior.  I was focused on letting utterly pure inner world emerge, completely secluded from outside.”  He must have had something like a cave in mind.  He carefully limited the openings so that the natural light would only enter at certain specific points, increasing the metaphorical effects.  Indeed, “White U” looks like a monastery, as anthropologist Shinichi Nakazawa points out, with whom Ito co-authored the book “建築の大転換  (The Great Transformation of Architecture)”.

If the “Aluminum House” was designed to question how we could potentially reconcile ever-advancing technologies with our raw sensibilities as natural, organic creatures, “White U” may be thought as one of the extreme directions a hyper-modernized society could head, which is something like a “private sanctuary” in the heart of a frenetic, information-ridden city.

Imagine this inner world, kept immune from any intervention from outside.  This haven is so isolated emotionally that it can be ruled by very personal sentiments shared only by the people inside.  It is “another world” created in a little pocket inside a cyber megalopolis. 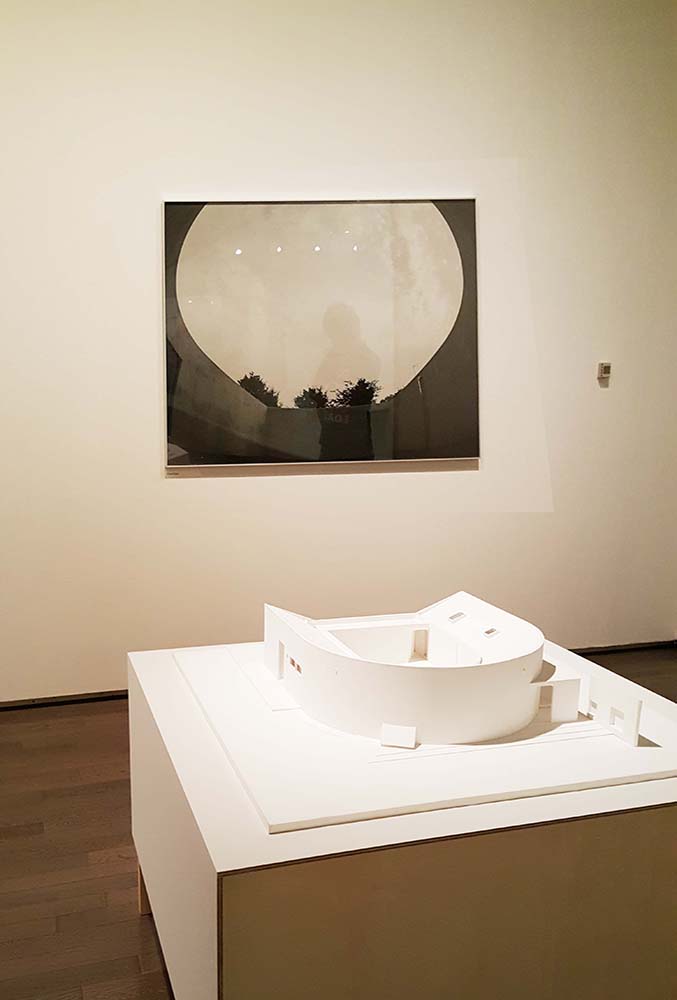 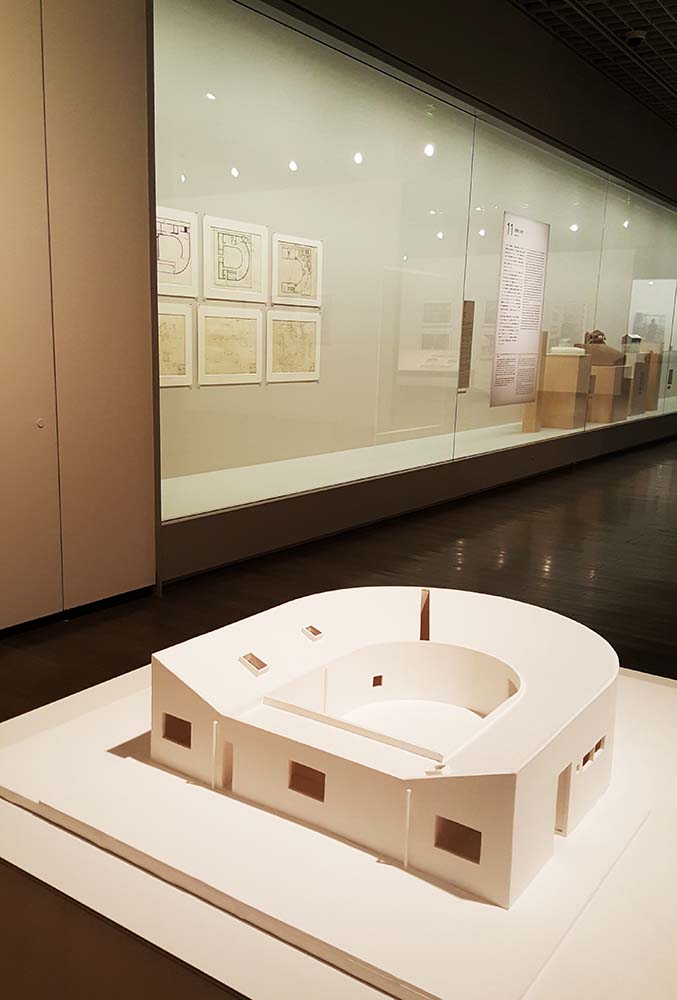 The “House in Koganei” is radical in a totally different way, compared to the previous two houses.  It was built at the request of the owner, who insisted on prioritizing cost reduction by eliminating everything unnecessary. (This budget cut could have been due to the oil crisis in 1979, but this can’t be confirmed.)

It must have taken guts to design such a house, because how is an architect supposed to add value when an owner refuses almost all design proposals to save money?  But Ito was not intimidated – he boldly stripped out all the frills from this house. Literally all of them. What was left was bare concrete walls and a steel structure. He even employed ECP (extruded cement panels), which was an emerging industrial material back then, mainly used in the construction of factories or warehouses. Obviously, the use of ECP was a product of cost efficiency, not of an aesthetic pursuit. Did this material choice make the house ugly? 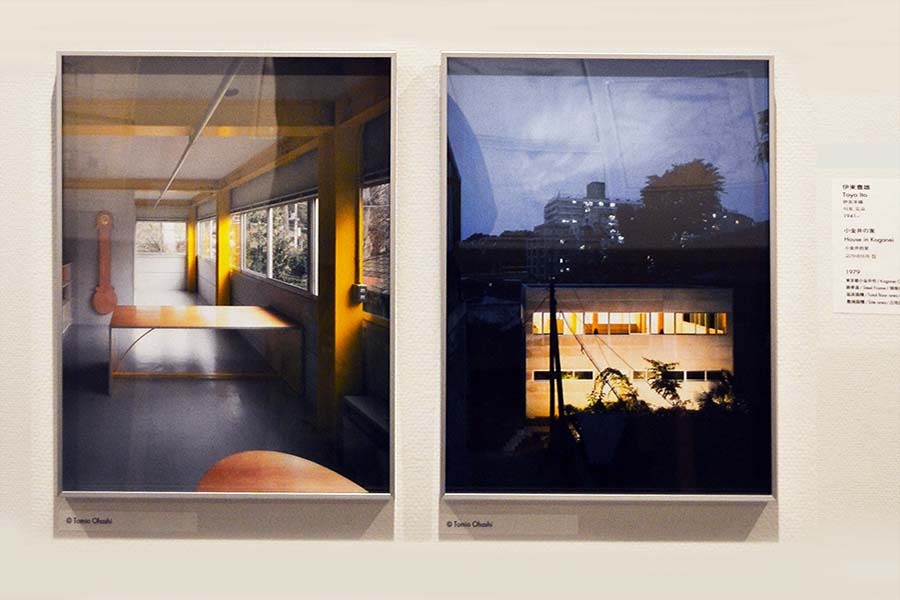 It’s true that the house looks like a small warehouse. But is this house ugly? The answer is definitely NO.  There is something aesthetically appealing about this house. Maybe its the bright yellow paint applied to the steel slabs. Maybe it’s the modest intervals between the columns, or the proportion of the windows relative to the walls.

We have developed our aesthetic values based on beauty in nature. We are programmed to find natural elements beautiful whether it’s color, texture, size, smell or touch.  So how do we react to industrial, artificial, engineered materials?  Did we develop them exclusively as cheaper, more efficient alternatives to natural products? Are they destined to look ugly?  If so, do we have to keep making aesthetic compromises to pursue efficiency or economy?

With the House in Koganei, Ito showed the new potential of how humans could face cheap, industrial materials.  This project emboldened young architects who came after Ito. They felt empowered to experiment with their creativity, challenging the conventions of the application of construction materials.

The “House in Hanakoganei” has something in common with the “Aluminum House.”  Whereas it looks futuristic from the outside, it actually incorporates some pre-modern features.  As shown in a picture, there are two distinct roofs. You can see the gable roofing on the left hand side, and the barrel vault on the right hand side. The gable roof has ceilings like a regular house, but the structure of the vault roof is exposed, as shown in the image on the left.  The right half of the house functions as a buffer to loosely connect the outside with the inside of the house.

Conceptually, the space under the vault roof is a “doma,” which means “dirt room” in Japanese.  A doma was widely used in Japanese traditional houses – the houses of ordinary people – to do semi-outside activities related to farming, cooking, crafting etc.  Since it had a dirt floor, making a mess didn’t matter. Although Ito’s doma looks more sophisticated than a traditional one, it definitely sets the tone by making the entire house gradually open towards the outside. 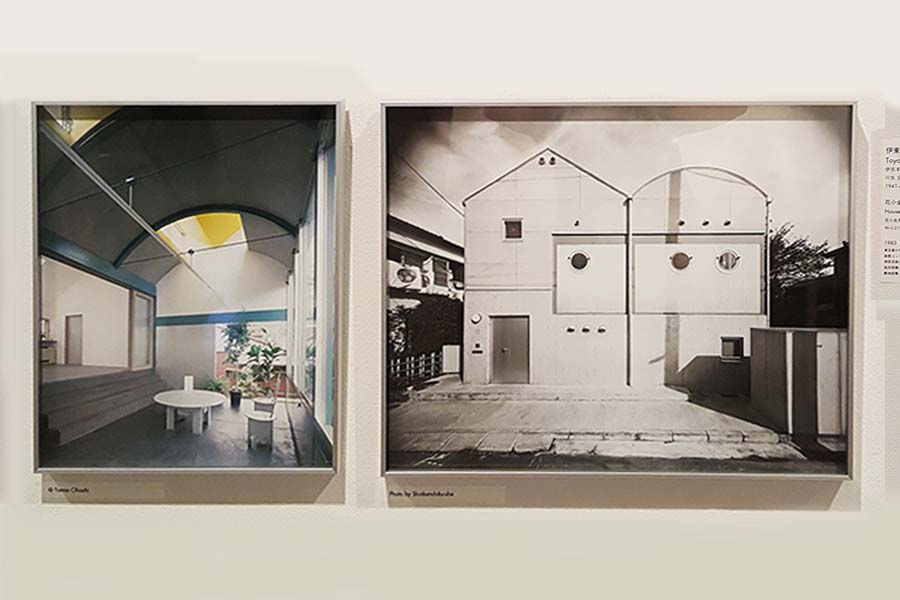 Ito’s houses never look like the conventional house that we are familiar with.  What would happen, then, if he were to design his own house?  The “Silver Hut” is his own house, built in 1984. It sits right next to the “White U.”

The “Silver Hut” is a highly acclaimed piece of architecture that marks the culmination of Ito’s work in the 80’s.  Please check other resources for more details: Toyo Ito & Associates, Archdaily.  Also, it has been re-built at the Toyo Ito Museum of Architecture in Imabari, Ehime. (The original materials were too worn out to be re-used, but some of the iconic furniture designed for the Silver Hut by Teruaki Ohashi were shipped to Imabari to maintain the spirit of the original.)

According to the presentation titled “Temporariness of Architecture” Ito gave to 東西アスファルト事業協同組合 in 1987 (not related to this exhibit), he originally conceived this house as something like a boat house used in many Southwestern Asian regions. There are certain fundamental activities, such as sleeping or preparing meals, which require fixed, sturdy spaces. But Ito thought that other activities needed spaces that could be more flexible. So he stood concrete beams at modest intervals (3.6 meters), and covered them with a light, vault-shaped steel frame. The aerial photo gives the impression of a temporary fairground.

It is a stark contrast with the seclusion of the White U. The Silver Hut is almost all open, left and right. There are two areas, including the patio in the picture below, that are covered with tarps.  Whether it’s a fairground, floating market or boat house, the Silver Hut is fluid. There’s one thing here today, but there will be something else tomorrow. The agile foundation gives you various possibilities as to what you want to do in each space. 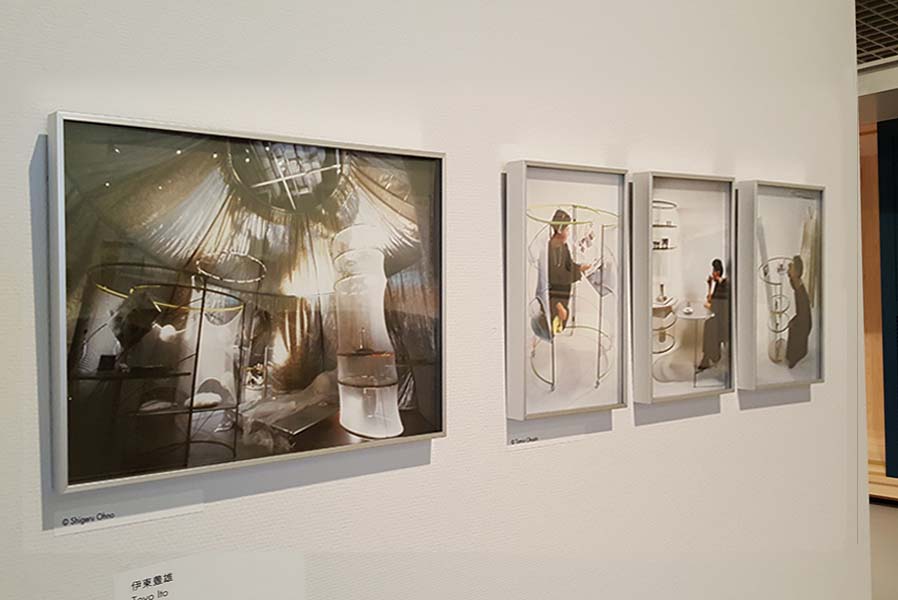 Looking back, the 80’s in Japan is almost surreal.  In just four decades after the devastating defeat in the WW2, Japan re-emerged as world’s largest, most robust economy.  People were in disbelief and euphoric.  40 years worth of struggle, they thought, finally came to fruition.  It was time to celebrate.  All of a sudden, money was everywhere, and freedom was everywhere.  Everyone, including young and female, felt so empowered.  It almost felt like nothing was impossible.

Even though the triumphant social mood turned out to be awfully wrong in the subsequent decades – called “lost decades” –  where the economy rapidly evaporated,  the 80’s in Japan was hallucinating.  It unleashed people’s desires in a progressive, bold way – right or wrong.  It was intoxicating.

It is against such social backdrop when Ito designed the “Pao.” The keywords for this house – “Tokyo”, “nomad”, and “girls” accurately describe the mood of the mid 80’s in Japan.

Tokyo was exploding. With sheer amount of money pouring in, it was accelerating its iconic status as a global economic and cultural center, or the epicenter of everything. Things WERE happening in Tokyo.  And the trend had also been led by empowered girls, who would agilely hop through every excitement unfolding in Tokyo, freed from depressing social suppression. They shined, unleashing their curiosities and abilities.

Such girls, Ito thought, wouldn’t need a sturdy house. They would rather keep sailing through Tokyo, guided by their instincts and impulse to find fun. They were the new “nomads.”  Tokyo could be one large house that envelopes all kinds of desires those girls could possibly have.  Within the big house called Tokyo, girls would occupy a little cocoon in which they would take a brief rest, gather information, apply make-ups and get going again.  Yes, the “Pao” was a house for “Girls” who “Just Wanna Have Fun,” which was released only two years before Ito’s avant-garde depot for “unusual” girls.