If you are interested in Japanese architecture, design or aesthetics, you should check out the landmark exhibition  “The Japanese House: Architecture and Life after 1945,” currently being held at The National Museum of Modern Art, Tokyo, in Japan (July 19 – Oct 29 2017).  The exhibition came back to Japan after traveling to Rome (at MAXXI, Winter 2016/7) and London (at The Barbican, Spring 2017).  If you visited Rome or London, take a moment here because you may find something new –  the narrative is slightly different from what you saw.

The Barbican exhibit introduction starts with: “…Japanese domestic architecture, from the end of the second World War to now, has consistently produced some of the most influential and extraordinary examples of modern and contemporary design.”

This is an intriguing statement, if you consider the fact that “modern architecture” is understood as an evolution of traditional European architecture.   Read more

From pantheons, through Gothic cathedrals to the Bauhaus, European style kept leading the world as a powerful manifestation of a dynamic interaction of philosophy, religions, aesthetics, politics, science, technology and economic reality.  Those European value systems, including architecture, became so influential that they ended up dominating the rest of the world in modern era.  Japan was not an exception.

It is considered that “modernization” in Japan started when feudal, isolationist military government led by Tokugawa Shogun collapsed in 1868.  By toppling the last shogun, the new regime (called Meiji) restored the country to imperial rule, and added some features of modern European political system (especially the UK system) in order to strengthen the country.  The new government also started to engage in international affairs. That’s when European value systems suddenly started flowing in.

The Japanese were struck and fascinated by the solidness of everything European, and felt torn between its overwhelming effectiveness and their own ambiguous, often subtle and inexplicable heritage and traditions. This developed into a serious collective identity crisis, when Japanese eventually lost the WW2 through their “unconditional surrender” to the Allies, which seemed to confirm the strength of modern Western system. 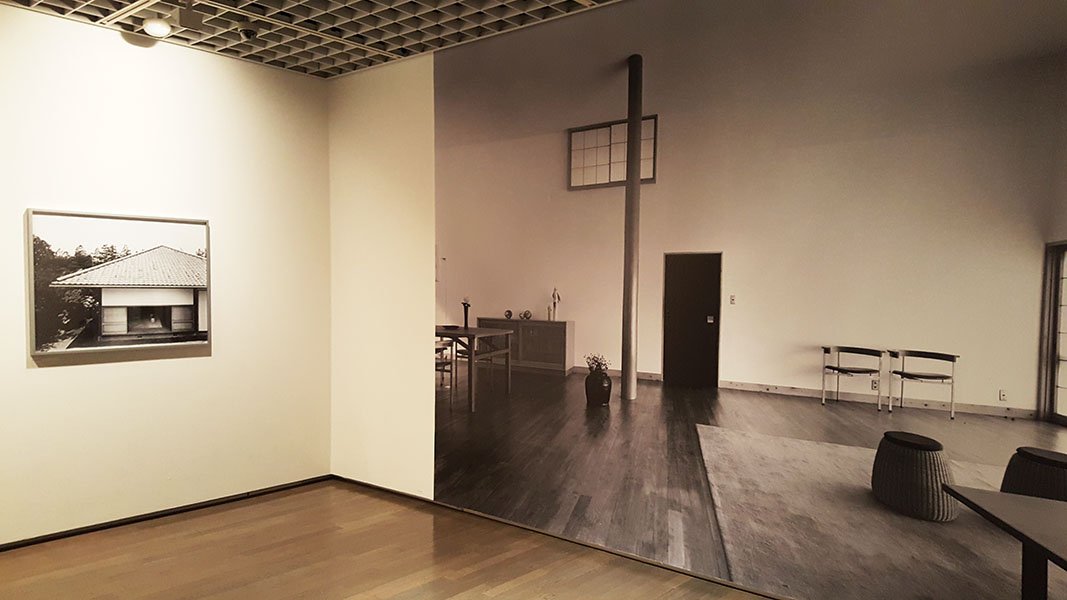 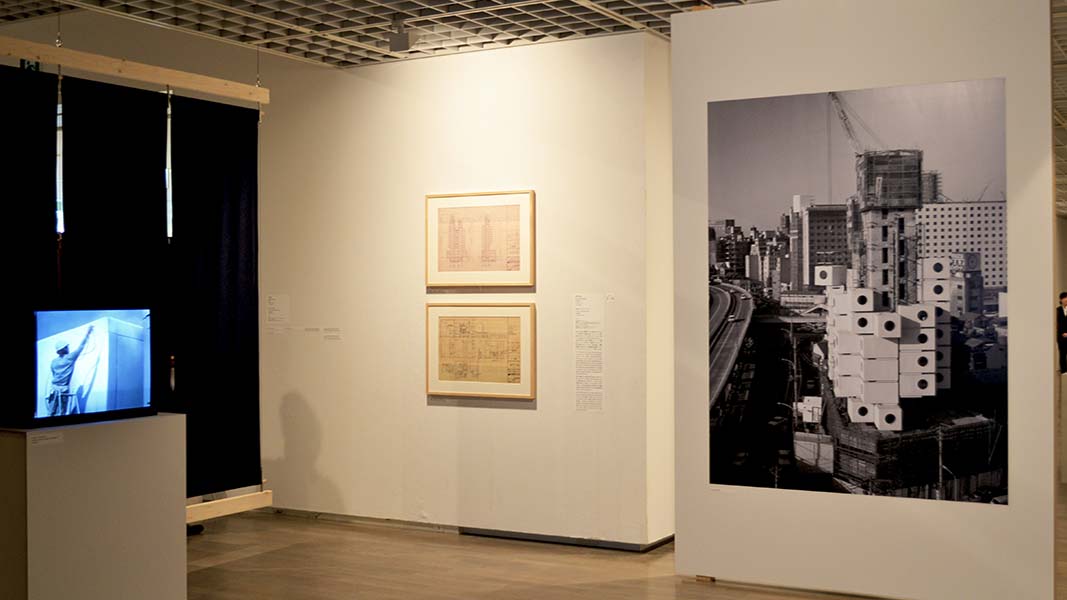 When Japan lost WW2, many people literally lost everything – houses, assets, jobs, along with political, economic and social security. If Japanese architecture after 1945 turned out to represent “the most influential and extraordinary examples of modern and contemporary design,” it must mean that the things the Japanese tried to re-construct after such a devastating identity loss and radical conversion to Western modernism ended up capturing some unique values/aesthetics that the very Western system they copied failed to recognize.  What were they?

Kenzo Tange is the father of Japanese modern architecture. 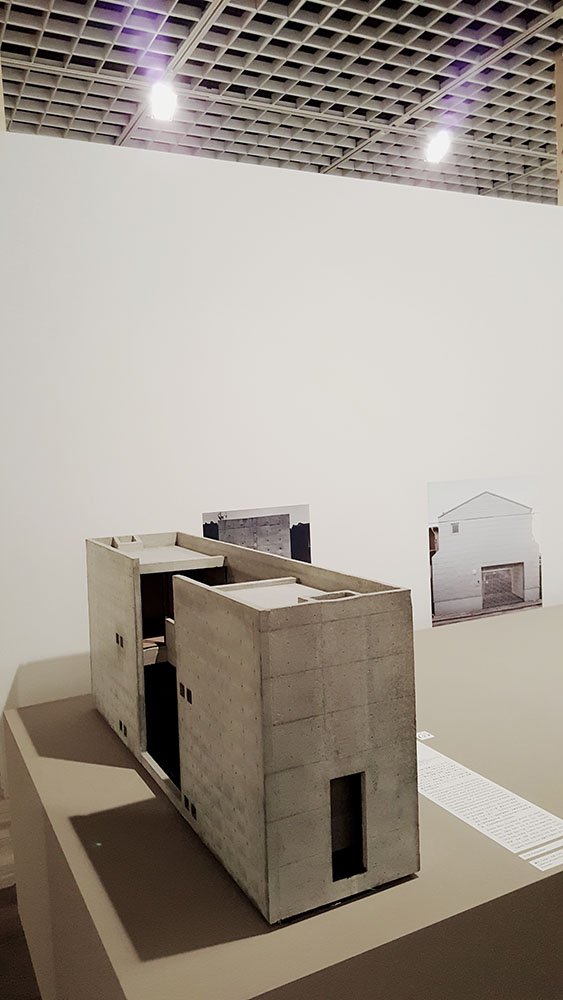 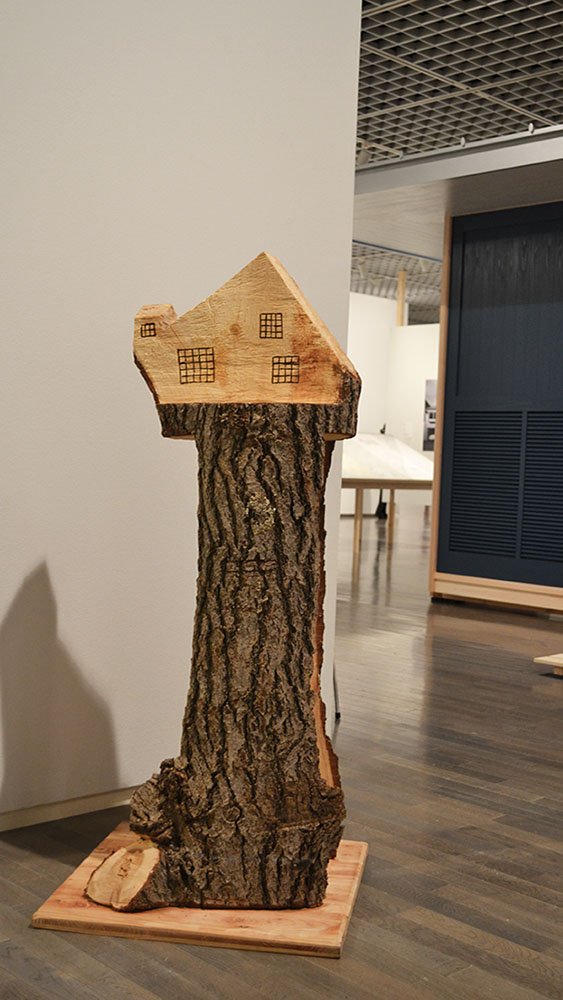 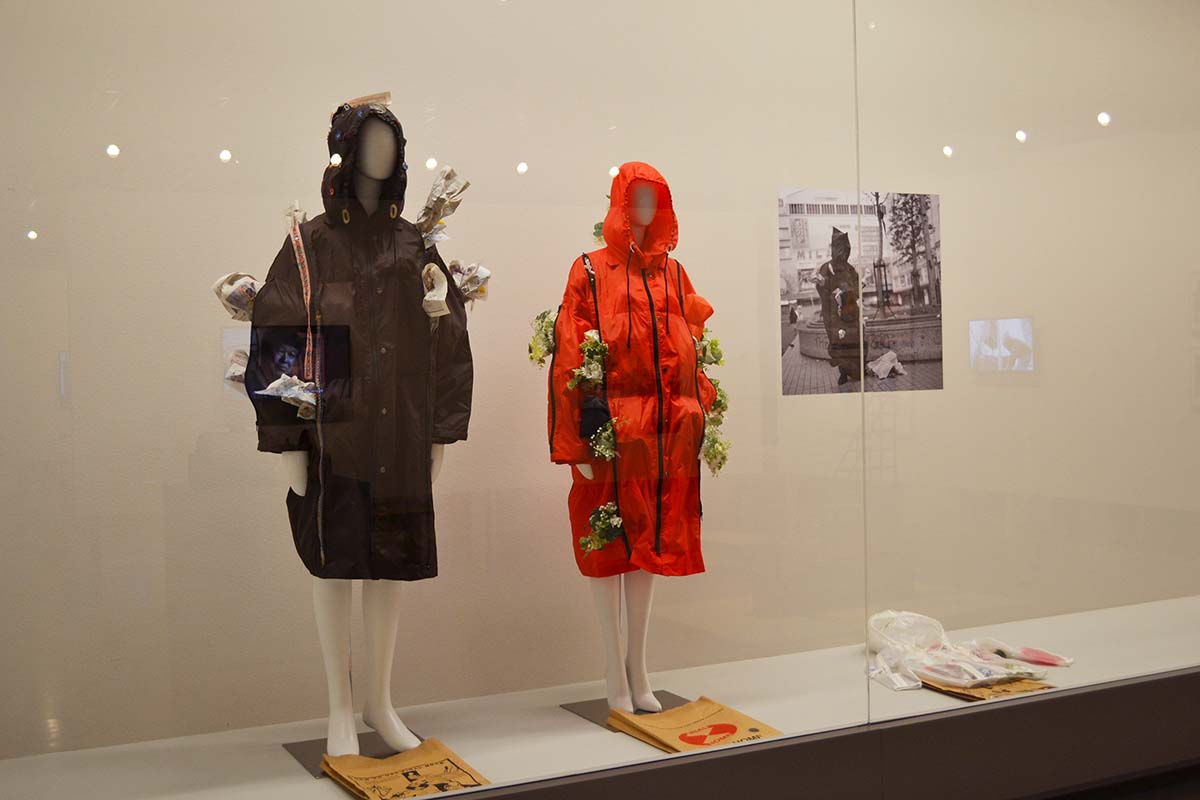 “Final Home” by fashion designer Kosuke Tsumura. He suggests that clothes could be our first order shelter, if designed/equipped so (for example, you can carry old newspaper in your pockets as shield/blanket alternative).

Yoshiharu Tsukamoto (architect at Atlier Vow-Wow) co-supervised the exhibit with Kenjiro Hosaka (Curator, The National Museum of Modern Art, Tokyo). They did an outstanding job providing perspectives to help us understand what Japanese architecture has been about in modern era, by treating architecture as a vehicle to support/define people’s lives and value systems.

The exhibit takes us on an intriguing tour to re-discover Japanese society from the 1950s to today through the lens of architecture.  As you will find out in subsequent articles, modern houses in Japan were also about producing countless numbers of “efficient” commercial homes (often mocked as “rabbit cages”), in order to support the enormous number of emerging industrial/commercial workers who drove the drastic post-war economic growth.  But of course, architecture is not just about economic efficiency.  It also serves as monuments that reflect beliefs, aesthetics, culture, trends, and a critique of the time.

When people’s mindsets and values changed so drastically along with unprecedented economic growth, how did architecture change?

NOTE:  NEW! Chapter 12: Machiya has been posted. Use the link above. Sign up for newsletter to receive updates for other chapters.

It would be reasonable to start off from reviewing what “Japaneseness” means. What is it anyway?

It’s especially important because Japanese houses and people’s life styles after 1945 were largely about radical modernization and Westernization, rather than maintaining Japanese traditions.  In terms of housing, it literally meant building rows and rows of new houses on the shattered land (because massive bombing had destroyed many urban areas), in order to achieve modern life styles.  People’s mindset was, “Bye-bye tradition, hello modernism,” because it meant a fresh start for freer, more affluent society.

As a result, the Japanese houses we see today, compared to those built 50 years ago, or 100 years ago are completely different.  And even among “traditional” architecture, there are more than one potential origins, since the Japanese society transformed from groups of hunter-gathers to communities of farmers, then to the Medieval regime ruled by aristocrats.  Where should we look for the roots of “Japaneseness”?

While there are many competing theories within the academic debate as to how to interpret Japanese architectural history, Tsukamoto discusses two examples.

The first is a painting from the 17th century by Kusumi Morikage. Titled “Cooling off,” it is a picture of a family of three, relaxing inside a very simple hut supported by four thin pillars and a roof of gourd vines. Since gourds grow in summer, this may show a summer night during which the family enjoy a cool breeze after a hot day, admiring the soft, subtle beauty of moonlight. Everything looks very natural. Architecture is minimized to a level where it is little more than a semi-visible framework allowing the humans to dissolve into nature.

By honoring the policy of The National Museum of Modern Art, Tokyo, we are refraining from showing the image of “Cooling off” by Morikage Kusumi  (納涼図屏風 久隅 守景).
Please make sure to click Tokyo National Museum website to enjoy it, which is a registered National Treasure.

It is no surprise that the second example is Katsura Rikyu (Imperial Villa). It is almost impossible to discuss Japanese architecture without talking about Katsura. First “re-discovered” by the acclaimed German architect Bruno Taut in early 20th century, it remains fascinating to the world. Built in the 17th century with a simple and succinct Zen aesthetic influence, it’s considered the culmination of Japanese traditional architecture. The design at Katsura focuses on a carefully balanced, simple composition that is reduced to the minimal. There are no verbose ornaments, decors, or symbolism. Many Western architects found the building to be “modern” even though it was built two centuries earlier and totally isolated from Western European architectural traditions.

By honoring the policy of The National Museum of Modern Art, Tokyo, we are refraining from showing the image of Katsura Rikyu here. Make sure to visit our posts on Katsura.

Those two examples highlight one characteristic that could probably define “Japaneseness” regardless of era, style and technical details: the close relationship between humans and nature.

But the distance between the two never becomes too close. There seem to be implicit agreements between the two that leaves some undefined buffer where they meet, so that the relationship can remain mutually sustainable.  It is this undefined area, or ambiguity, that often allows boundless beauty emerge from Japanese arts. Haiku, the Zen garden or ikebana (Japanese flower arrangement) are prominent examples.  Japanese architecture often reveals this delicate relationship, serving as a tangible gateway to nature.

“Cooling off” expresses the bliss our senses feel when surrounded by gentle nature. Even their clothes are reduced to the minimum in this picture. In order to maximize the pleasure coming from an intimate relationship with nature, Japanese people did not mind minimizing architecture to an almost non-existent level.

The Katsura Imperial Villa is designed to emphasize the beauty of nature.  But it’s not a bare, untreated/unruly kind of nature. People have put so much elaborate effort – both technical and aesthetic – to cultivate nature to reveal its utmost delicacy.

However, with the significant impact of modernization after 1945, the relationship between Japanese people and nature changed drastically. Buffer zones between nature and people that existed in every community started to disappear due to industrial/commercial developments. Nature has had no options but to recede into the background. (Have you seen “My Neighbor Totoro” by Studio Ghibli?  It is based in the 50’s or 60’s, when Japanese communities started losing close ties with nature.)

What happened to the “Japaneseness”?

This article is to be continued.  Sign up for newsletter to receive updates.