The recent “tiny house movement” may be relatively new but that is not the case with tiny houses themselves. And in fact, strictly speaking, the tiny house movement isn’t new either. Before the modern era, most houses were tiny unless they were for the wealthy. While we tend to assume that the vast majority of people lived in poverty and had no options but to live in a small house, even 1,000 years ago the tiny house was already a “choice” for some. Surprisingly enough, there were people who sought rural houses, smaller than the then-average (Just imagine what kind of places people lived in the Middle Ages!) for almost exactly the same reason we might be attracted to tiny houses today. In medieval Japan, people called their version of the tiny house “草庵 (so-an)” which meant “thatched grass hut” built away from home – usually in the depths of nature – or as outbuildings on a farm. Practitioners of Buddhism, artists and/or wanderers created the “tiny house movement” a thousand years ago in Japan by combining monastic religious pursuits and a plain lifestyle of “have-nots” that sought beauty in nature, and created so-an as a base for freer, ideal life.

So-an survives to this day conceptually and aesthetically but it’s not easy to physically replicate because the original buildings have have rotted away long ago leaving few archeological remains. We can only guess at their form from literature and traces remaining in old, rural communities. 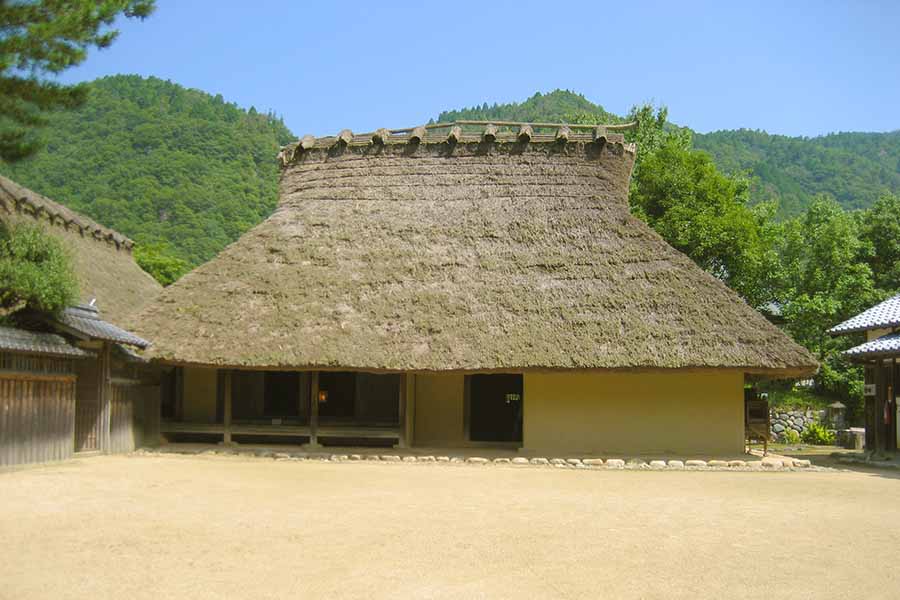 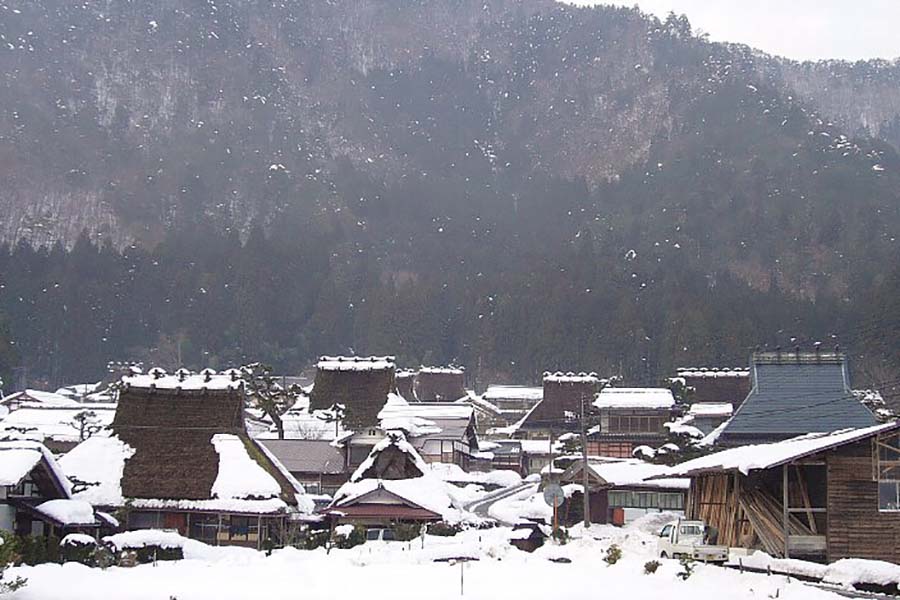 “Left: “Hakogi-ke house” is one of the oldest surviving “minka” (a traditional Japanese house) in Hyogo, Japan, which is believed to be at least 800 years old.
Right: A school of old minka in Miyama-cho, Kyoto.
These minka were sturdily built to last for hundreds of years, but both have grass-thatched roofs that give us some idea how a so-an might have looked. 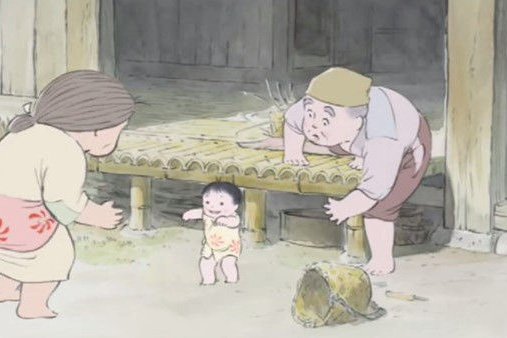 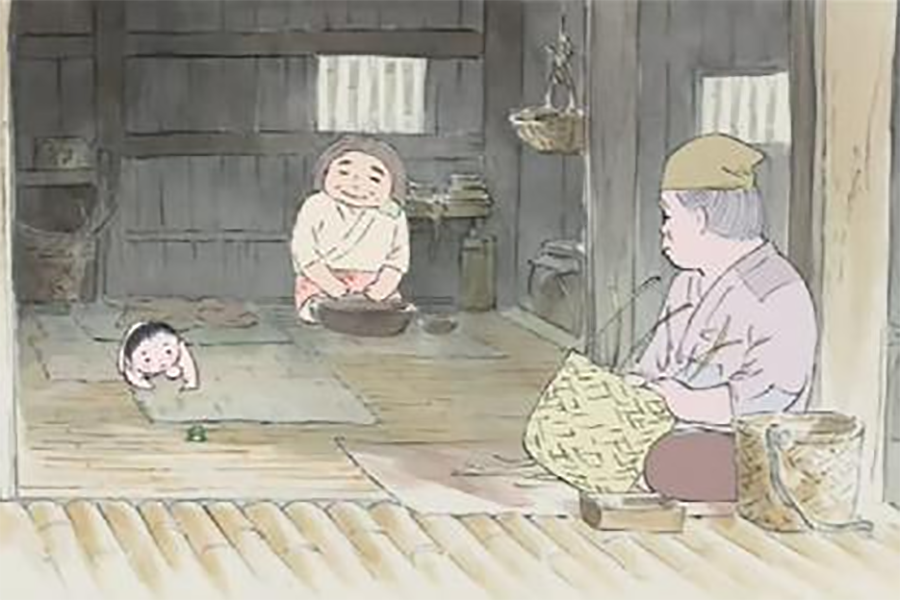 The so-an is believed to have been based on huts inhabited by ordinary people (mostly peasants) in the Middle Ages which are long gone leaving behind little documentation. When Studio Ghibli and the late director Isao Takahata produced The Tale of Princess Kaguya in 2013 based on a 1,000 year-old story, chief animator Osamu Tanabe struggled to recreate the real houses and living conditions of the 10th century. After years of effort, he came up with plain houses that seemed to blend into the natural environment. Notice that the baby in a room (right) is playing with a frog that came in from outside. 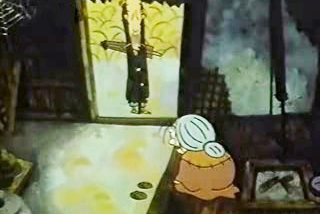 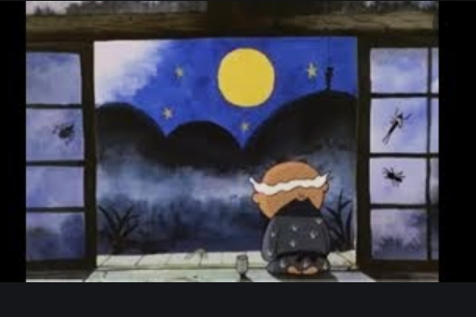 While the original story of The Tale of Princess Kaguya was written in the 10th century, folklore is an aural tradition that has been passed down from generation to generation as moms recited them to kids, helping create a shared perception among people on how life was “once upon a time. Manga Nippon Mukashi banashi started in 1975, was a popular Japanese TV cartoon series that visualized how people imagined living centuries ago. Notice that bugs were part of the life.

More architectural clues to the design of a so-an can be found in religious buildings. For thousands of years, devoted Buddhist practitioners renounced the world and built small temples/training facilities in the depths of nature in order to focus on religious pursuits. As one of the core tenets of Buddhism is to “extinguish the flame of desire,” many of those retreating priests chose to live alone, almost becoming part of the natural world. That spirit, not just a question of architectural details, influenced the creation of the so-an.

Left: 投入堂 (Nageire-do), Tottori, Japan, is an annex of a Buddhist temple believed to have been built more than 1,000 years ago halfway up a steep cliff.
Right: 瑞泉寺 (Zuisenji temple) Zen rock garden, Kanagawa, Japan, designed by Muso Soseki (1275-1351), the father of Zen rock garden. Soseki cut away the natural rock surface to create a space for meditation training.

Now, let’s combine them and re-create the so-an. But before doing so, it is useful to the understand philosophy of so-an. 鴨長明 (Kamo no Chomei, 1155- 1216), the Japanese shrine priest-turned accomplished poet/author chose to live in a tiny, rustic house in Kyoto, Japan in his late years and wrote “方丈記 (Hojo-ki),” one of the oldest and finest memoirs in Japanese literature. Hojo-ki has a famous introduction which, intriguingly enough, almost perfectly summarizes the philosophy of the tiny house movement a thousand years ago:

The flow of river is ceaseless and its water is never the same. The bubbles that float in the pools, now vanishing, now forming, are not of long duration: so in the world are man and his dwellings. It might be imagined that the houses, great and small, which vie roof against proud roof in the capital remain unchanged from one generation to the next, but when we examine whether it is true, how few are the houses that were there of old. Some were burnt last year and only since rebuilt; great houses have crumbled into hovels and those who dwell in them have fallen no less. They city is the same, the people are as numerous as ever, but of those I used to know, a bare one of two in twenty remain. Thy die in the morning, they are born in the evening, like foam on the water.

Having lost the power struggle for senior positions in national Shinto (traditional Japanese religion) organizations in then-Japanese capital Kyoto, Kamo no Chomei became disillusioned by the way “privileged” society worked – noble people incessantly fight for power, status and stability, only to lose them eventually. As he retreated to a small mountain in suburban Kyoto to live in an ichijo-shiyo hut (which is about 3m x 3m (!)), he chronicled what he saw of the outside world with a keen and critical eye. 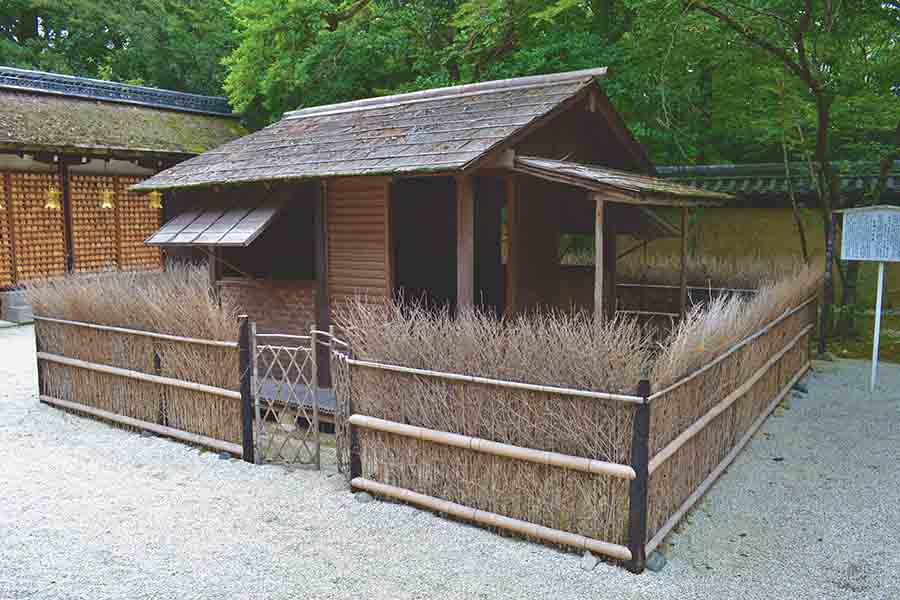 The replica of the Hojo at the Kawai Shrine, Kyoto. Kamo no Chomei settled in this hut after moving from place to place. It is said that it’s a make-shift to facilitate disassembling and reassembling.

It is widely recognized that the Hojo-ki is a great representation of the Japanese aesthetic concept “無常 (mujo),” which means that everything in this world keeps changing and eventually goes away. Accepting it as the truth, mujo doesn’t try to stick to stability, power or status – things people usually crave. Instead it tries to find happiness and beauty in transient moments where things serendipitously collide. Mujo was an indigenous notion widely shared by ancient Japanese, but it turned out that it was very similar to the concept of kuu, the central tenet of Buddhism including in the Zen school. Essentially, mujo is very close to what people typically associate with Zen or wabi-sabi, Zen-influenced Japanese aesthetics. If you start pursuing something truly permanent and beautiful in this mujo world where everything keeps changing, you end up appreciating and embracing the very fact that everything changes.

The tiny house perfectly fits into the concept of mujo. What else lets you better appreciate the beauty of transient nature? Middle Age priest and wandering poet 西行 (Saigyo, 118-1190) left us major clues as to how to leverage so-an to live in harmony with a mujo world.

Born into an affluent Samurai family, Saigyo decided to renounce his samurai status at the age of 23 and started pursuing Buddhism, as well as poetry, as he traveled from place to place without having a permanent dwelling.

As he was born into an affluent family, he had a guaranteed future. Nonetheless, he chose to give up his status to wander deep into nature and write poems (waka). He influenced many prominent waka/haiku poets that followed, including Matsuo Basho. As Saigyo especially loved – or rather was obsessed with – sakura (cherry blossoms), he lived in the Yoshino mountains for three years. Yoshino is still famous for its plentiful sakura trees that cover entire mountain ranges. Though astonishingly beautiful, the Japanese consider sakura as a symbol of mujo beauty because the petals last barely a week before they are quickly blown away.

Other than the short period in spring when the sakura blossoms, the mountains must have been restful. In a total solitude, he wrote poems about the beauty of nature. Many of them questioned as to why he was still obsessed with things like the sakura even when he tried to give up everything to become “empty.” 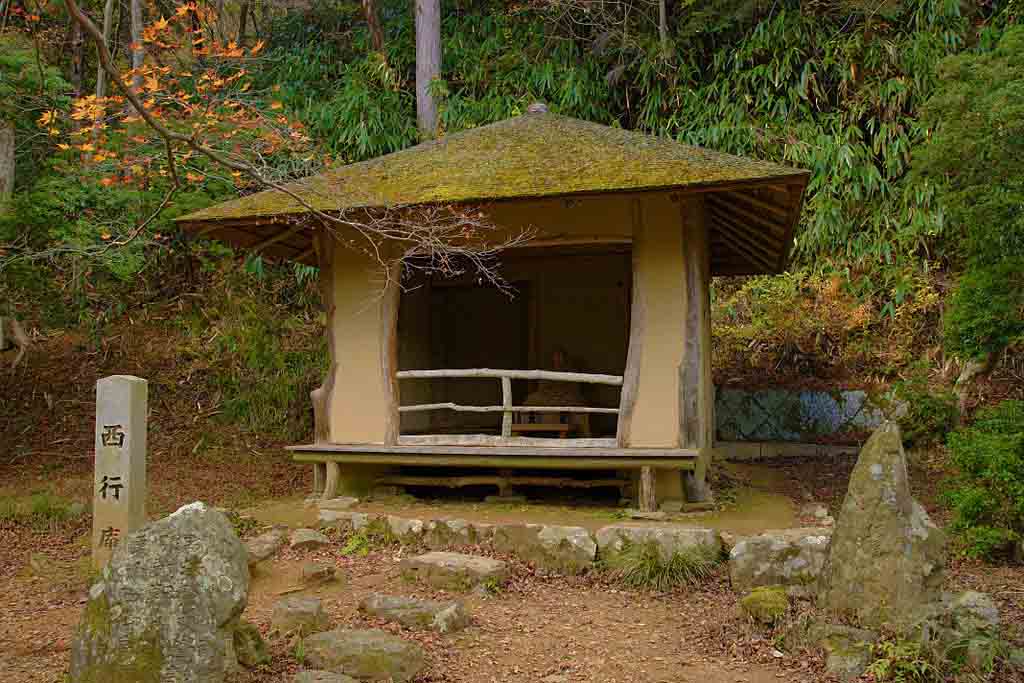 Saigyo-an is a small hut that is believed to have been Saigyo’s dwelling for three years during his stay in the mountains of the Nara prefecture. It is in the thick of nature. Imagine what life would have been like to live alone in this tiny hut.

The spirit of Zen and so-an is still relevant in today’s tiny house movement. When society is volatile and uncertain, only you can truly make yourself happy. When you strip away your belongings one by one to become truly you, you may find yourself in a tiny house in the heart of nature.