Airbnb started listing the Yoshino Cedar House, in Yoshino-cho, Nara, Japan, starting in January of 2017.  It is Airbnb’s first attempt to offer a venue to support rural communities, which are rich in nature, traditional culture and industry, but are struggling to keep up with global competition, and whose name of the game is economic efficiency.  Yoshino Cedar House will help connect the Yoshino community with guests, who could come from anywhere in the world, to share its abundant experiences and beauty surrounding the forestry and lumber industry. 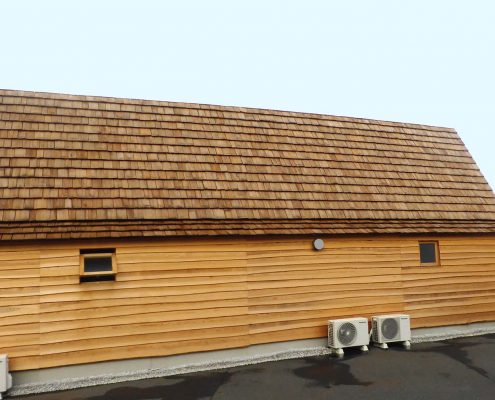 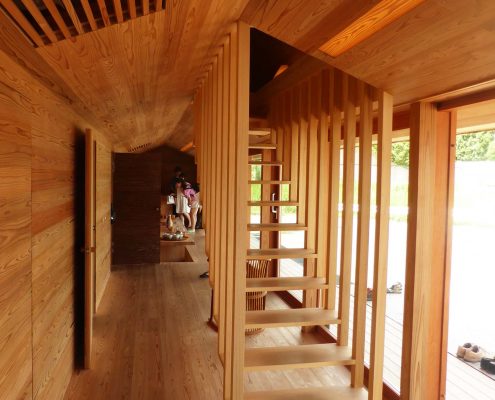 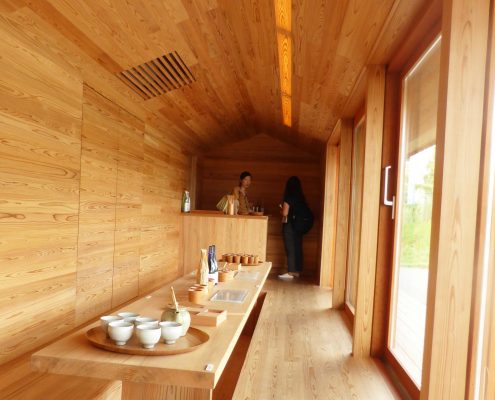 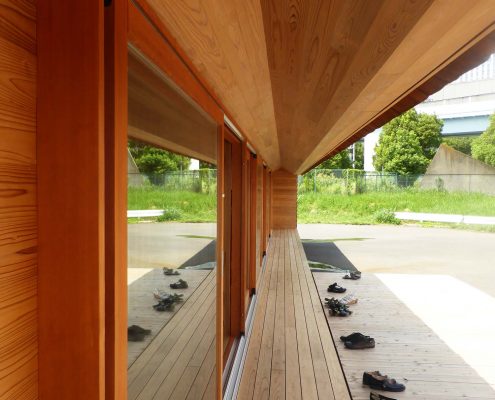 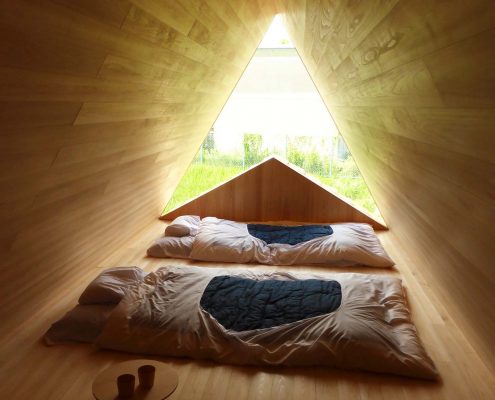 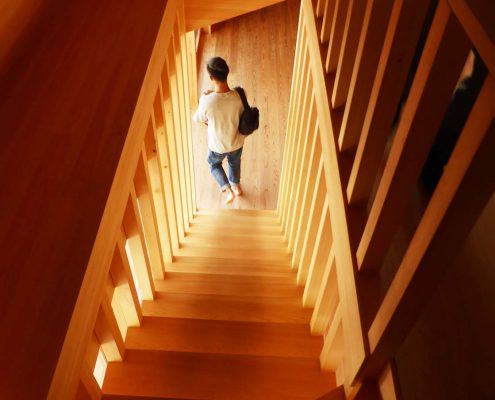 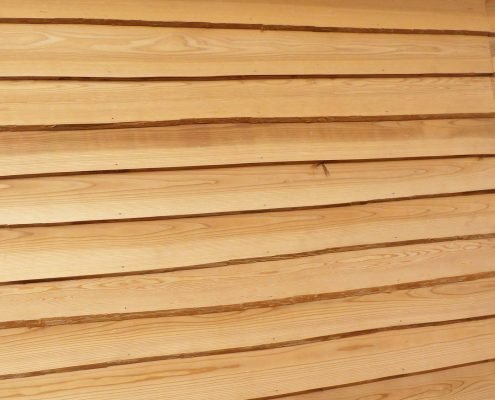 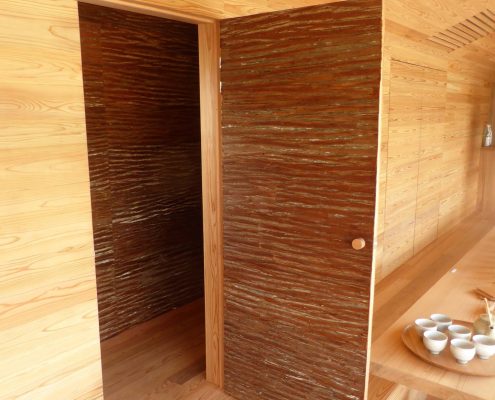 Everywhere in the world, many rural towns are feeling “left out” from the game of global economic competition, and are desperate to re-connect with the world to make an economic comeback.

But re-connect to what, more precisely? That is the question.

Many countries, local authorities and projects still seek to re-connect such areas to the economic market, which has already denied their values.

Airbnb and Go Hasegawa, a Japanese architect who designed the Yoshino Cedar House, seem to seek to re-connect these people with global travelers and nature, rather than with a market operated based on efficiency. But how could such areas make a comeback, if they choose not to compete on economic efficiency?

Actually, people in Yoshino have been trying to maintain and sustain rich and abundant nature for thousands of years, ever since Nara was the ancient capital and center of Buddhist architecture in the 6~7th century.  They have been nurturing high quality forests and trees (notably Yoshino sugi (cedar) and hinoki (cypress)), which have been used for high-grade architecture, crafts and industrial applications.  Yoshino cedar is a brand associated with the highest quality. They have rich heritage on every front, EXCEPT for economic efficiency. They can offer everything but efficiency.

Yoshino Cedar House is an attempt to advertise their non efficiency-driven values, as resources, to attract guests, who would be willing to pay to experience Yoshino’s rich heritage.  Although the experiment has just begun, its Airbnb listing is almost fully booked over the next couple of months. Enthusiasm is high.

Yoshino Cedar House is an attempt to advertise their non efficiency-driven values as resources to attract guests, who would be willing to pay to experience Yoshino’s rich heritage.  Although the experiment has just begun, its Airbnb listing is almost fully booked over the next couple of months. Enthusiasm is high.

Go Hasegawa has designed various residential architectural structures that stand out in their uniqueness, including “pilotis in a forest” (video below), and “House in Komae.”

Whereas each house uniquely accommodates its owner’s needs, there are a couple of signature characteristics in Hasegawa’s work, such as smallness and its keen cognition to the surroundings.  In his work, square footage does not seem to be a decisive factor in creating architectural value.  Because he is so observant and cognizant of the environment in which the building exists, outside – which does not technically belong to the architecture – often slips into the scene and contributes to its total aesthetics and amenity.  For example, in “pilotis in a forest,” the ground floor does not have walls.  Instead, the surrounding natural wood functions as walls, as you can see.  In his lecture “Studies and real,” he explains that he visited the site multiple times during the design phase, so as the resulting building could sit seamlessly within its natural tree standings.  This kind of spontaneous magic is also noticeable in Yoshino Cedar House.

In order to leverage the beauty of the local lumber industry (which is especially famous for Yoshino sugi (cedar) and hinoki (cypress)), Yoshino Cedar House uses Yoshino cedar, grown, harvested, processed locally, and is built by local carpenters and craftsmen.

In addition to the crude, striking “woodness” coming from fresh Yoshino cedar, what captures your senses when you enter Yoshino Cedar House is its smallness – or more specifically, narrowness.  Its shape is very rectangular, and the width is probably less than 10 feet.  Coupled with a high-pitched gable roof, the entire house looks like a pencil from outside, and when you are inside, you almost feel like you are “enveloped” by cedar. 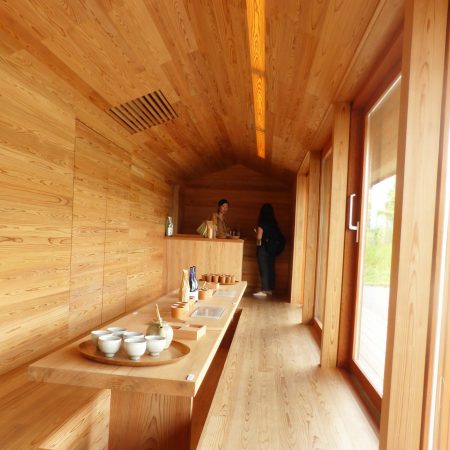 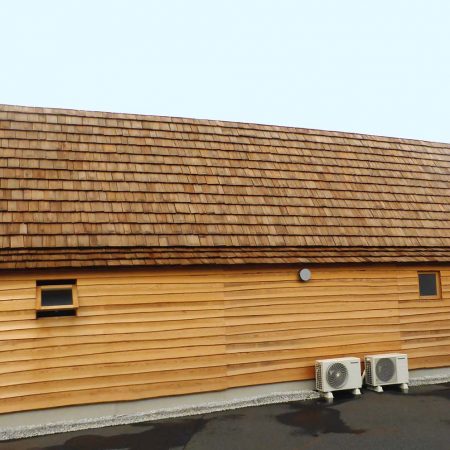 Its actual setting in Yoshino-cho, the house sits by the river (Yoshino River) against the backdrop of a cedar forest. It looks like a piece of wood, laying on a river bank. It’s naturally dissolving into the environment.

It is striking how a small architectural structure like Yoshino Cedar House looks so in harmony with nature, which is boundlessly large.  But as another rising Japanese architect Sou Fujimoto observes, nature is made of a whole bunch of small things, such as leaves and branches.  A small unit, carefully designed to be an organic part of big nature, makes total sense.  Indeed, it reminds us that our body is small and fragile. When we envelope our small body with a delicately designed small and natural envelope, to be embraced by big nature, we feel a deep connection with our surroundings.  Hasegawa often uses the word “身体性 (shintai sei).”  Its mechanical translation could be “physicality,” but in Japanese context, it means something like physical consciousness, reality, sensitivity or cognition.  When his small architecture shines, it’s because it’s functioning as a device to condensate people’s relationship with the environment, and their physical sensitivities become fully activated to devour various potentials that could maximize the joy of living.  Yoshino Cedar House is yet another one of Hasegawa’s magical small architectural structures, which connects guests with their surroundings – people and nature alike.

The first floor is “community space” where local people and guests can intermingle.  Since it faces the trail by the river, local people can take a walk in the morning and stop at the House to have some tea, Hasegawa imagines.  There may also be guests sipping coffee, and they may enjoy spontaneous encounters.  The house also has engawa (open hallways common in Japanese traditional homes, that connect the inside and outside seamlessly) facing the river, which makes it even easier for people to collide, or people and nature to collide. 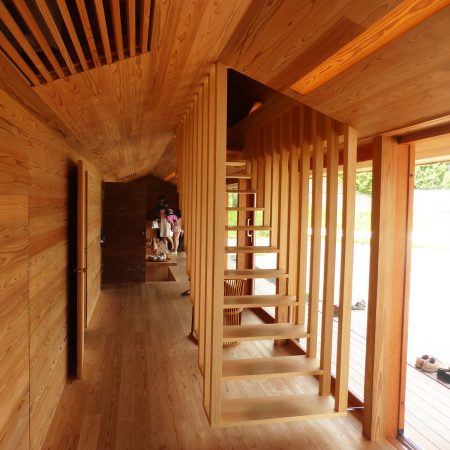 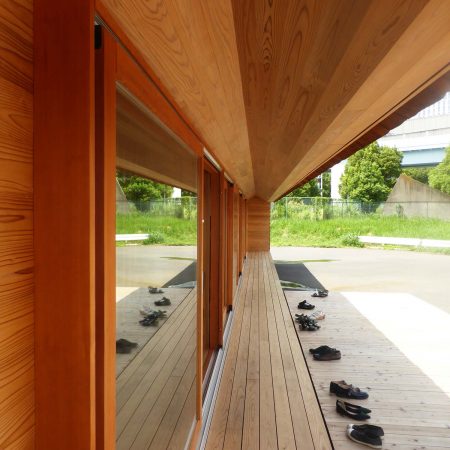 The second floor is a bedroom (or two), which is rather a loft; it reflects the triangle shape of the high-pitched gable roof.  The roof is hanging low, so you might have to bend your back a little bit, if you are tall.  And you enter this floor using a very narrow, steep stairs.  Except for the striking triangle windows attached to both ends, the room looks dim and empty.  And it actually emphasizes the beauty of the sunlight coming through the windows, which face east (room of sunrise), and west (room of sunset).  I saw that many online pictures reporting House Vision used the view from those triangle windows. You couldn’t resist.  There was something purifying in the light coming through to this narrow, small wooden room filled with the scent of fresh cedar.

Climbing to the second floor is almost like entering chashitsu (small tea ceremony house).  You enter chashitsu through a small “tunnel” called nijiri-guchi, which requires you to bend to go through.  You “condensate” your body to start traveling to your inner self, then you land on a womb-like chashitsu, which is often only about 30 square feet.  Chashitsu is often described as a microcosm, which will eventually connect you to a vast and boundless universe.  Ultimate condensation triggers cognitive concentration and arousal, which takes you to the vast nature.  It’s like a big-bang.  This floor probably has the same effect. You enter steep, narrow stairs to throw yourself into the heart of vast nature, which actually literally surrounds you. 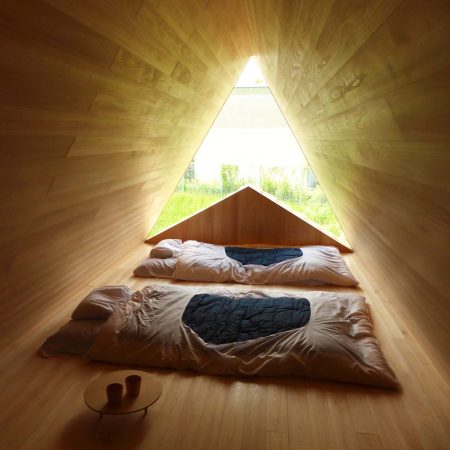 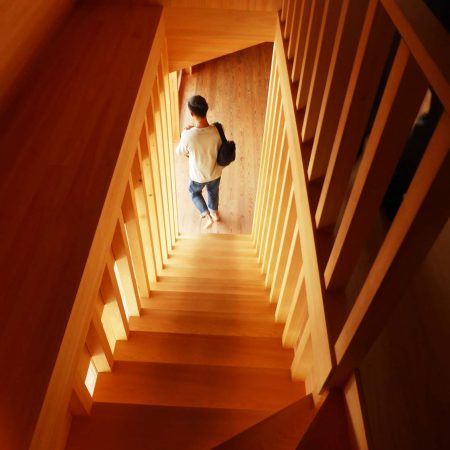 When I first entered this house, I had to question why it had to be so small.  Yoshino is in the heart of a sparsely populated, rural community area, where land price shouldn’t be too high.  It shouldn’t be prohibitive to design and operate a large guest house with abundant space.  But the architect made me realize that the house had to be small, in order to accomplish its mission: connect people to people, people to a rich heritage and people to nature.

Imagine sleeping in this place at night. You could still feel and smell cedar around you, which may be dimly moonlit.  Since you are in a loft, you would hear the sound of nature – crickets, frogs, owls and other sounds, you might not even know what they are.  You could also hear the river, and the wind rattling the trees.  You are literally in the middle of nature.

In the morning, you would probably wake up to the chirping of birds, or the roaring of cicadas, if it’s summer. (they are unbelievably loud!) In order to go down to the first floor, you use the narrow stairs, which might lead you to touch and feel the woodwork crafted by local carpenters and craftsmen.  At the community space, you would be sitting – or squeezing in – with local people, with whom you would be enjoying small conversation.  This proximity and intimacy to the objects is necessary if guests really want to connect with local assets. 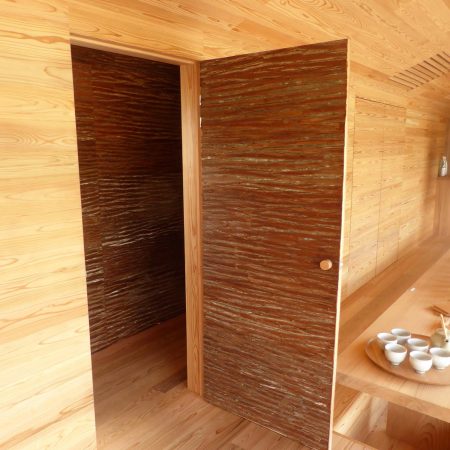 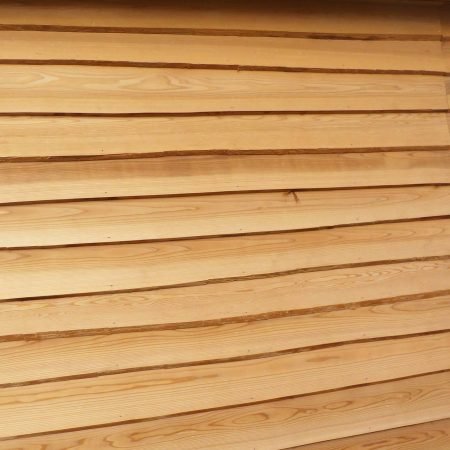 The house is succinct. There is nothing over-designed.  And it just emphasizes the beautiful and delicate work of local carpenters and craftsmen who worked on each and every part and detail of this house. You may notice that the wood is mostly unfinished.  It’s called “shiraki,” – wood wearing no makeup – which has been highly valued in Japanese traditional architecture.  Since you don’t “cover-up” the surface, because it has taken a lot of delicate work, from the growing of trees to harvesting, cutting and processing, to deliver the beautiful outcome, using shiraki.  It’s the same idea that you be sensitive to what you eat, how you sleep, exercise and take care of your skin, if you want to look naturally gorgeous, without wearing make-up.  This is yet another asset Yoshino has: they really know how to take care of wood, and maximize its natural beauty.  And this kind of expertise is not something technology can take over.

Our next post discusses the potential of “true sharing” opportunities revealed through the collaborative effort of the Yoshino Cedar House and Airbnb.