Are you Googling “wabi-sabi” because you are interested in Japandi – the Japanese/Scandinavian design aesthetic hybrid? Are you confused because you haven’t found the information/inspiration you are looking for? We write a lot about Japanese aesthetics, including wabi-sabi, so we can help! 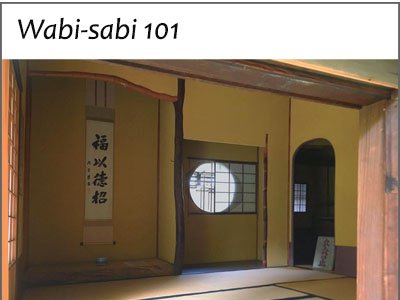 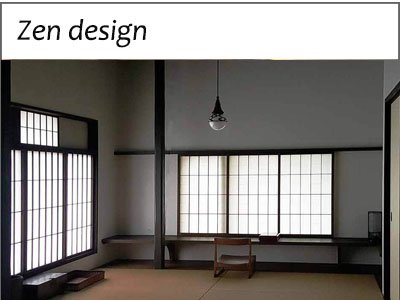 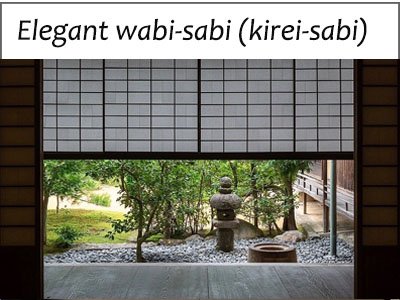 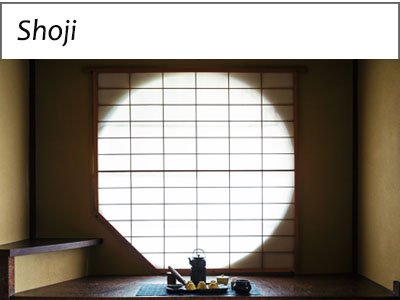 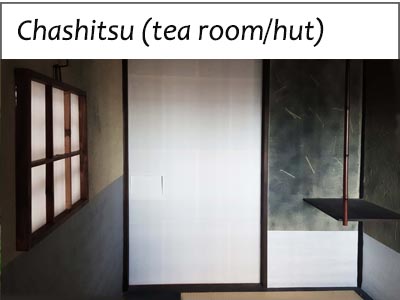 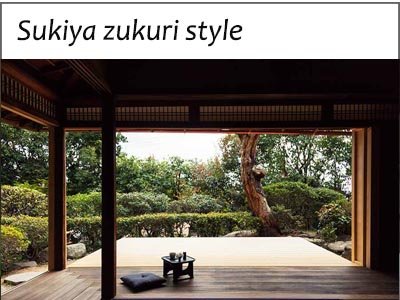 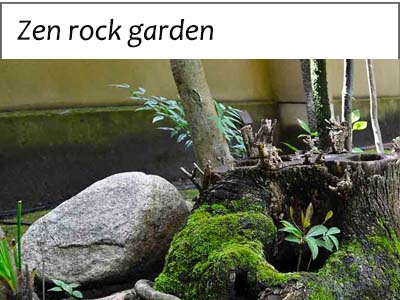 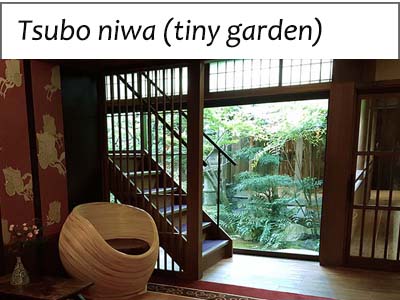 What is wabi-sabi in Japandi?: a practical guide for confused design lovers

If you are confused about the influence of wabi-sabi in Japandi, it’s probably because you think of wabi-sabi as a design style – it’s not. Wabi-sabi is a Zen-influenced aesthetic philosophy that emerged in the 15th century, discovering beauty in seemingly negative elements such as solitude, decay, imperfection or smallness. So it seems that it is a leap to directly apply it to interior design (most Japanese won’t do that), but there may be a way of doing that. To start off, take a look at some traditional/authentic wabi-sabi art to see if they are in line with the aesthetics you are looking for. 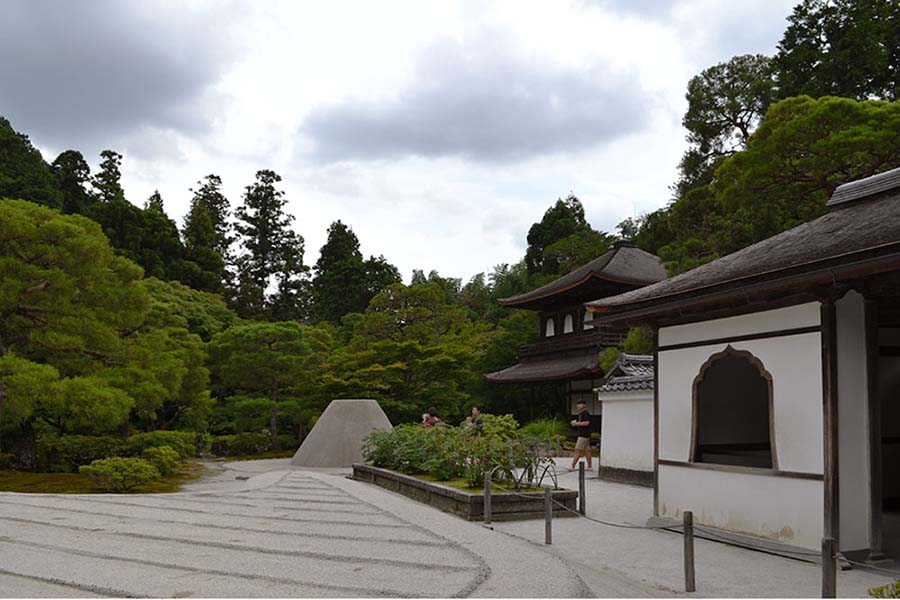 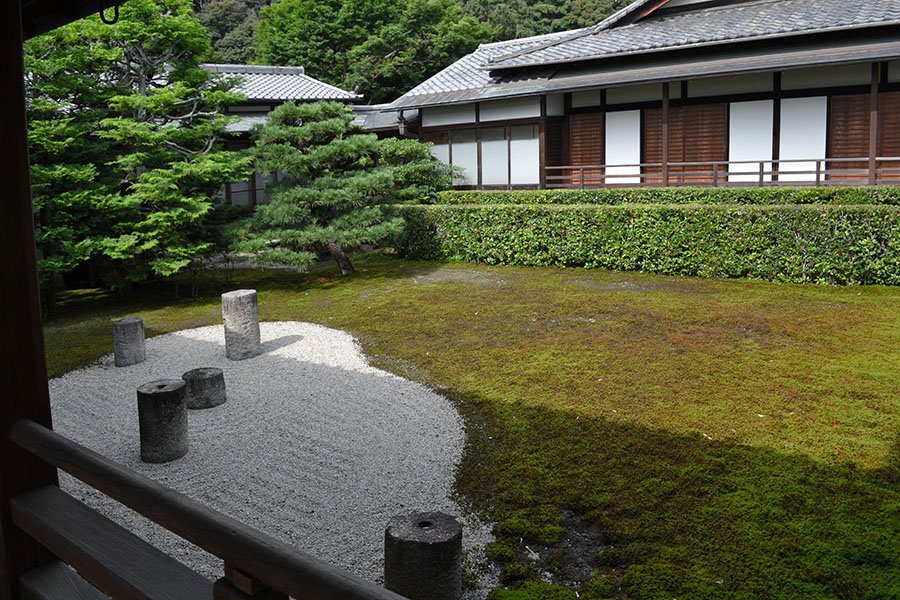 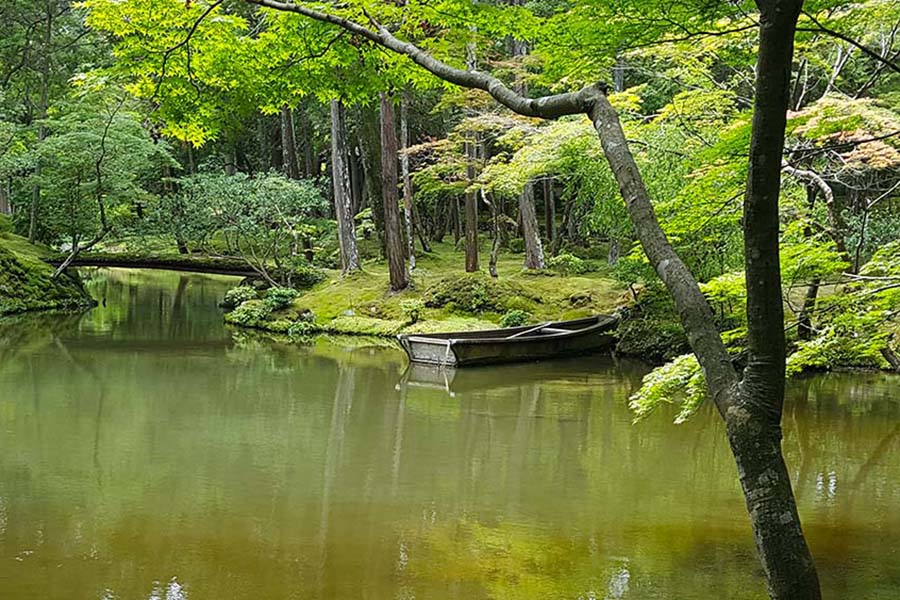 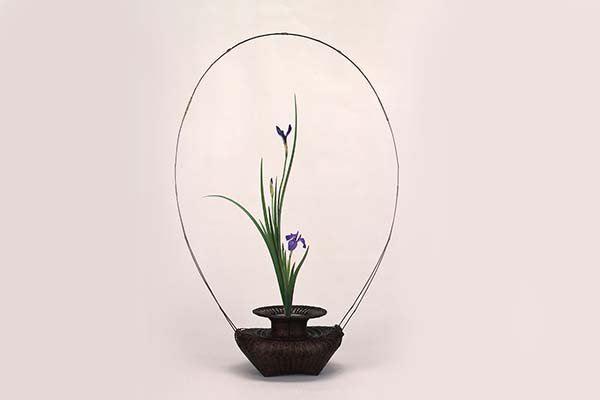 Top: Ginkaku-ji Temple in Kyoto. Commissioned by Shogun Ashikaga Yoshimasa (1449-1473) who was an ardent patron of wabi-sabi (Higashiyama) culture, the Ginkaku-ji is considered the culmination of wabi-sabi architecture. 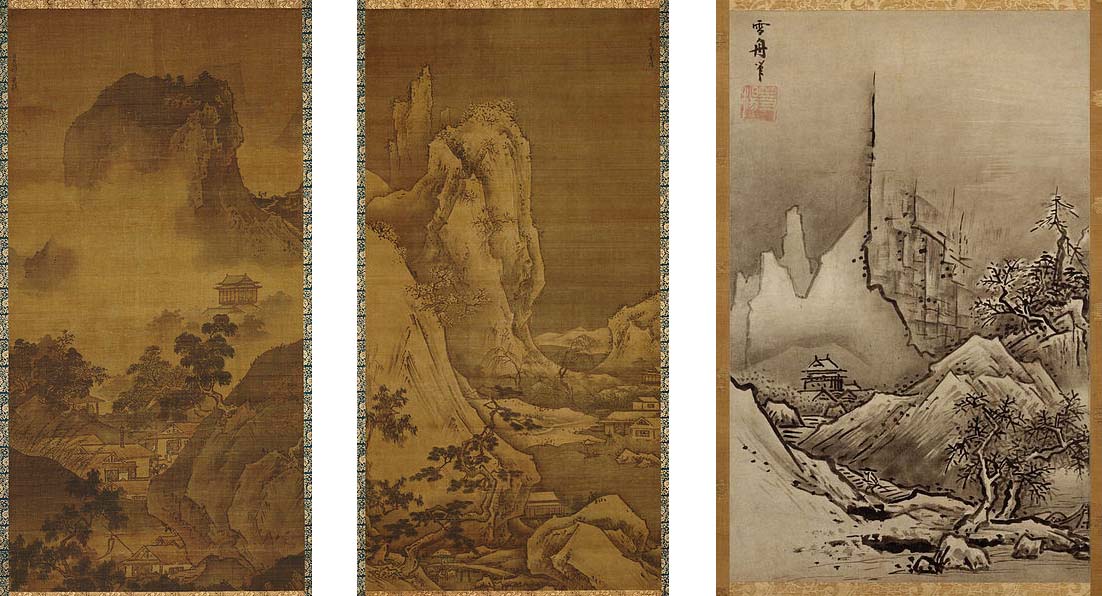 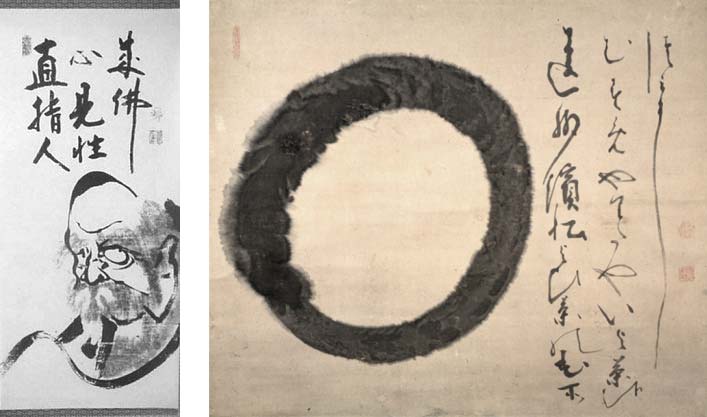 If you liked these, then you might want to learn what wabi-sabi is all about. As it is an overarching concept, it can be applied to architecture or interior design. Read our article Wabi-sabi 101. 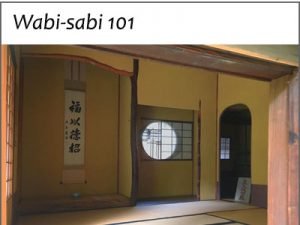 It is widely believed that wabi-sabi originated from Zen-influenced, Higashiyama culture that emerged in Kyoto, Japan during the 15th century. The name was coined a posteriori to describe an art/way of life that found beauty in wabi (solitary, sad) and sabi (rustic, decaying), and embraced seemingly negative notions such as imperfection, asymmetry, smallness, solitude, rust or decay. It was also anti-luxury, anti-elegance and anti-authority. 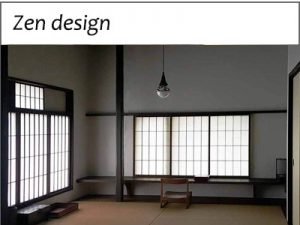 Although Zen design is not a thing, Zen had a tremendous influence on Japanese aesthetics, including wabi-sabi. In the Zen, behavior and consciousness shapes your life and are reflected in how you design buildings, rooms, and especially gardens; you may already know that the Zen rock garden (kare-sansui) is a major wabi-sabi art.

Read The what and how of Zen design 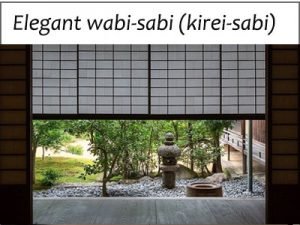 As mentioned above, wabi-sabi is about embracing seemingly negative notions such as imperfection, so it’s anti-elegance by design. If you want to add elegance to wabi-sabi, you should turn to Kobori Enshu (1579-1647), a unique figure who was a high-ranking samurai bureaucrat, Tea Master AND great designer. He added design refinements, elegance and brightness to otherwise subdued wabi-sabi, which has come to be called “kirei (elegance) sabi.” 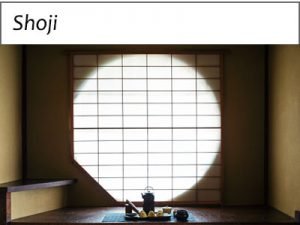 Shoji is the traditional Japanese screen/sliding door/partition made of a wooden frame and paper. Japandi seems to appreciate the quality of shoji: fine lines add aesthetic order, and translucency that softly connects the interior with the outside environment. Since you may not able to use shoji in a room surrounded by load bearing walls, you would have to make some structural “tweaks” for your Japandi experiment.

Read The Many Faces of shoji 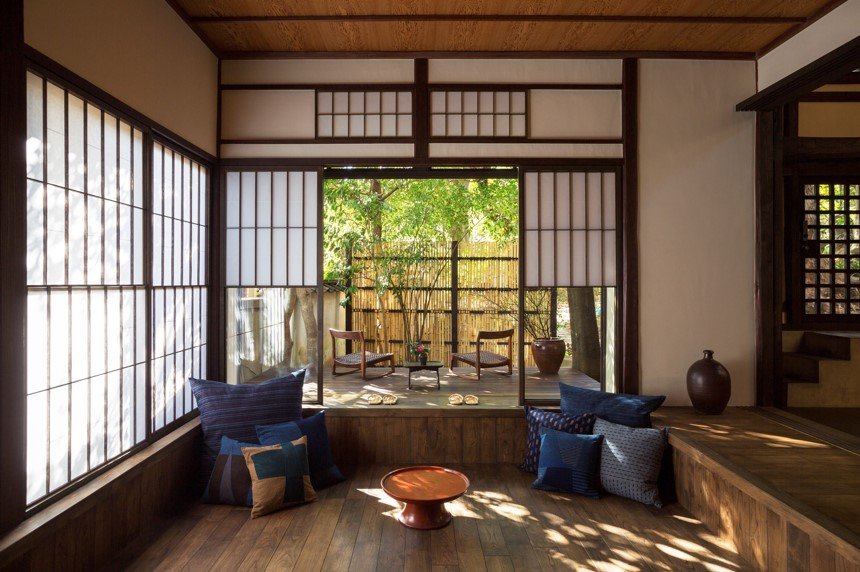 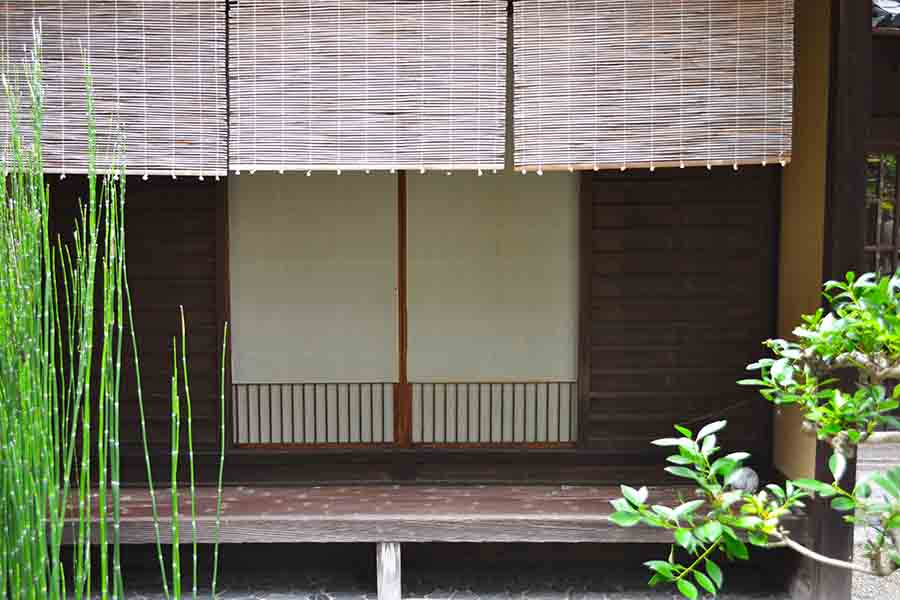 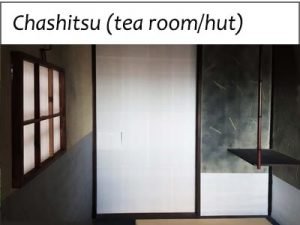 Although it may not be widely recognized, chashitsu (rooms/huts used for sado (traditional Japanese tea ceremony)) best represent the essence of wabi-sabi, including architecture and interior design. They traditionally come in small sizes and are full of architectural adventures that leverage materials/details that are natural, untreated, unpolished and vernacular. 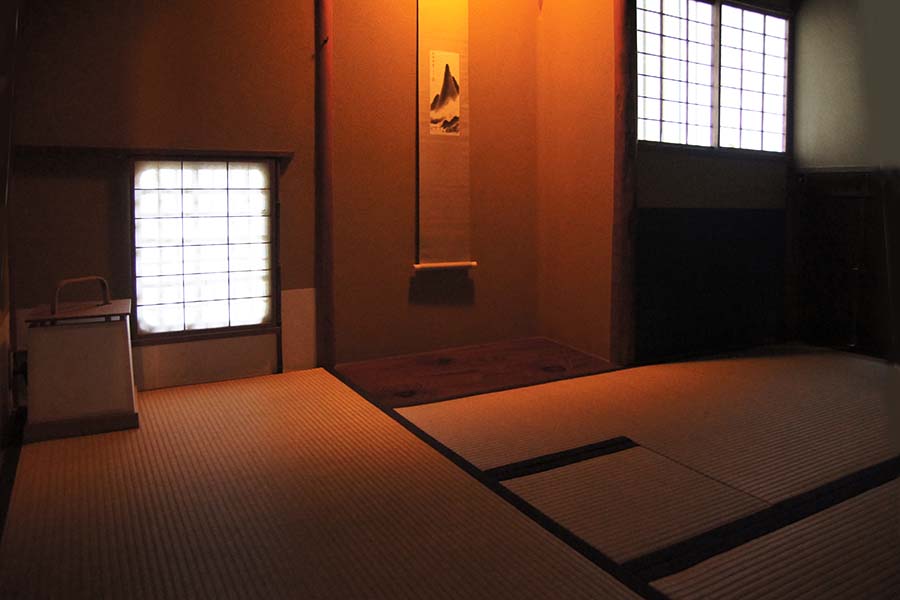 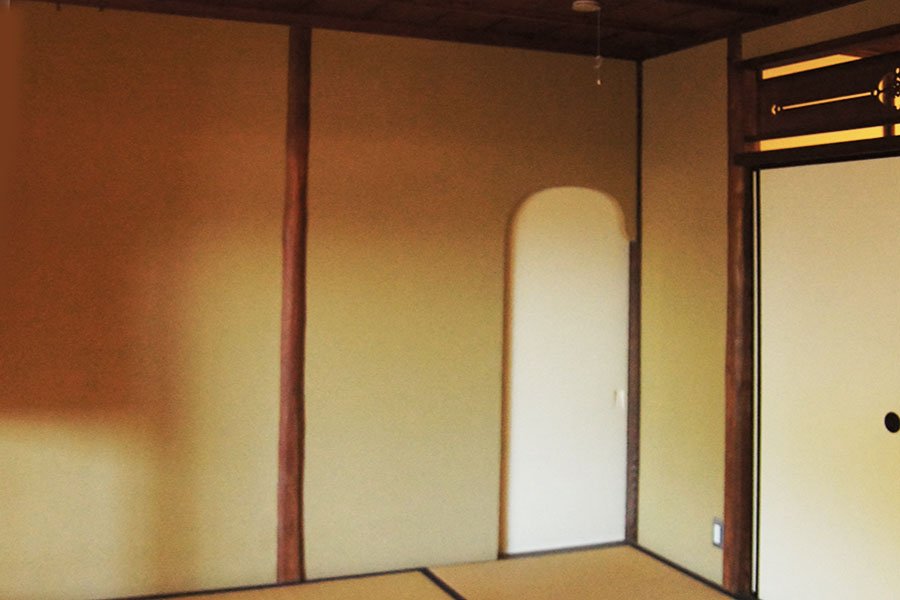 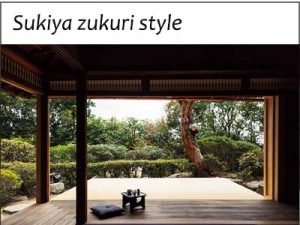 Chashitsu is used only for tea ceremony, but its architectural details were embraced by 数寄屋造り (sukiya zukuri), a traditional architectural style you still see in authentic hotels or restaurants today. Sukiya zukuri is not necessarily wabi-sabi, but it’s possible that it’s what you are looking for. 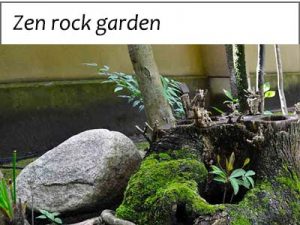 Gardens – the outside area adjacent to rooms – have been playing a pivotal part in traditional Japanese architecture. Since they are so close, gardens have always been part of your room design, and that’s something you may want to incorporate in your Japandi approach. When it comes to wabi-sabi, there’s nothing as important as kare-sansui (Zen rock garden) to express its beauty. 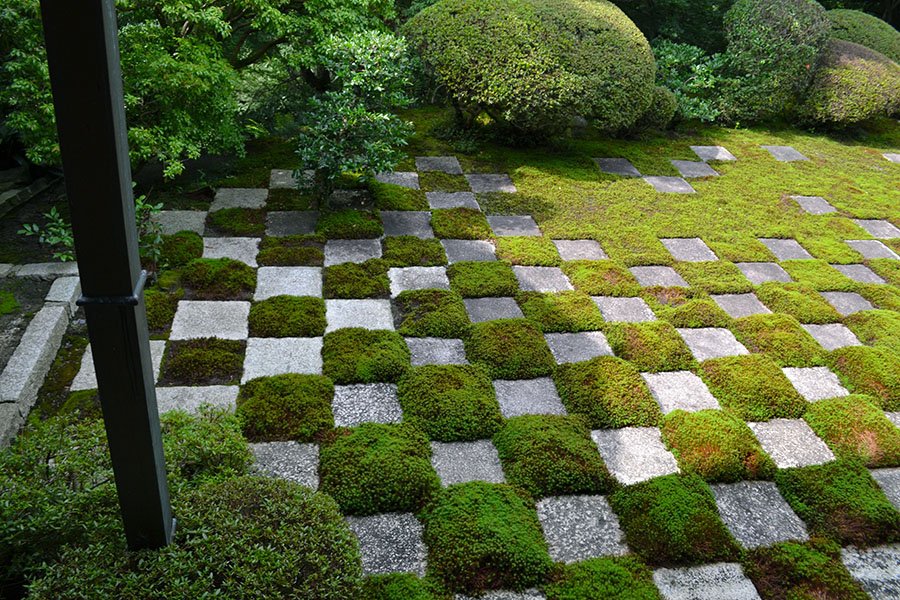 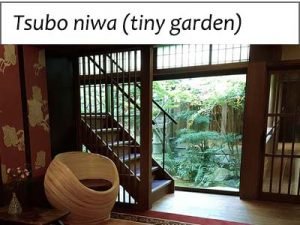 Garden as a microcosms in your property

Japan does not have a lot of flat land. People have been living in small area by inventing many hacks to make small living comfortable and beautiful. Tsubo niwa is a super small garden that can be placed in between building units.