Natural disasters have been shaping architecture, as Kengo Kuma points out in his book “Small Architecture (小さな建築).”  Every time devastating disasters such as an earthquake or a fire hit major cities around the world, people frantically tried to improve the strength of architectural structures so that they could shield our fragile body from the overwhelming power of nature.  As a result, modern architectural buildings have become increasingly bigger, harder, sturdier and divisive.

However, the March 11 Tohoku earthquake, tsunami and nuclear power meltdown, abruptly washed away/annihilated supposedly invincible modern architecture, supported by our great technology.  It was a chilling wake-up call for many Japanese.  Leaders, planners, designers and architects were faced with a fundamental question of how to re-design communities/regions that lost so much.  They had to question themselves: “Do we want to repeat ourselves and try to restore everything we’ve lost?  Will it bring us happiness, after such devastation?”

Toyo Ito, the laureate of the Pritzker Architecture Prize in 2013, co-authored the book ”建築の大転換 (Great Transformation of Architecture),” with anthropologist Shinichi Nakazawa in 2012, to discuss potential directions architecture could take to help communities navigate through the post-modern, post-3.11 earthquake world to pursue happiness.  Ito believes that architecture could, and should play a pivotal role in re-connecting nature and humans so they can live resiliently and sustainably.

Sendai Mediatheque by yusunkwon (above), by Sendai Blog (below) [CC 2.0] via Flickr Creative Commons

10 years prior to the 3.11 Tohoku Earthquke, Ito designed “Sendai Mediatheque” in Sendai City, which was only 40 miles away from the epicenter of the horrendous Magnitude 9.0 earthquake. 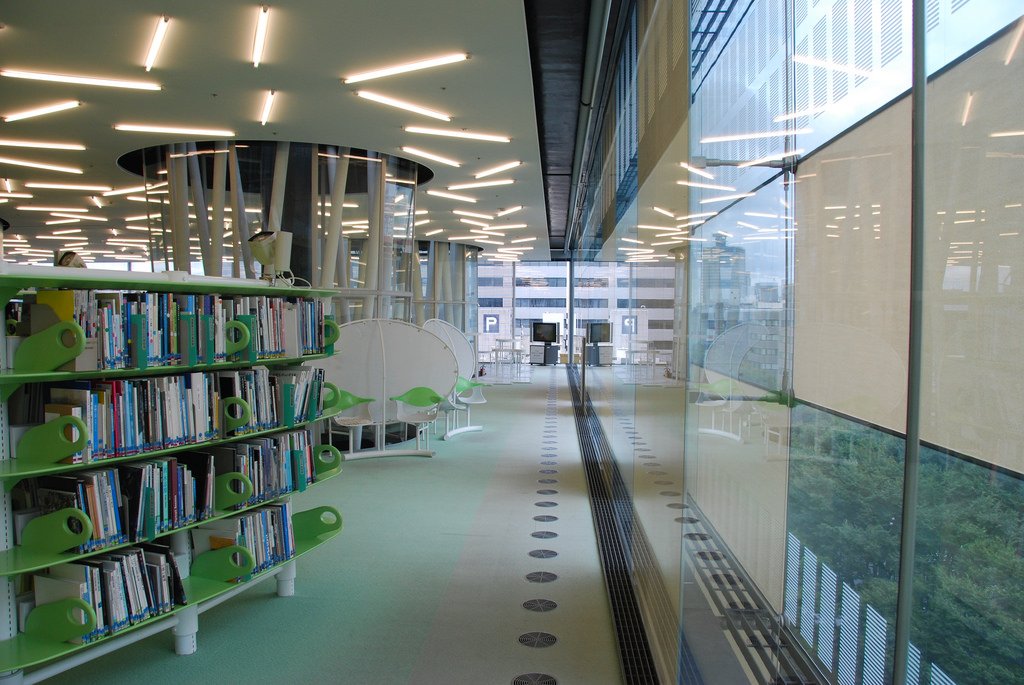 Mediatheque is a public media center for local people.  In order to house various functions (such as library and audio/visual facilities) organically and flexibly, it adopts three unconventional elements: “plate (floor),” “tube (pillar)” and “skin (wall).”  In the discussion Fujimori talks especially about tubes, which are tree-like elements that vertically penetrate the plates, to form a structure.  Unlike rigid pillars, tubes are flexible members of the architecture through which air, energy, water, sound or information can flow (you can see them in the picture).  Transparent tubes contain “outside” elements inside them, which can be seen from “inside” the building. When this happens, inside (where people are) becomes outside, and outside (inside the tubes) becomes outside.  There is something inexplicably organic and spontaneous about Ito’s architecture, which draws people in. 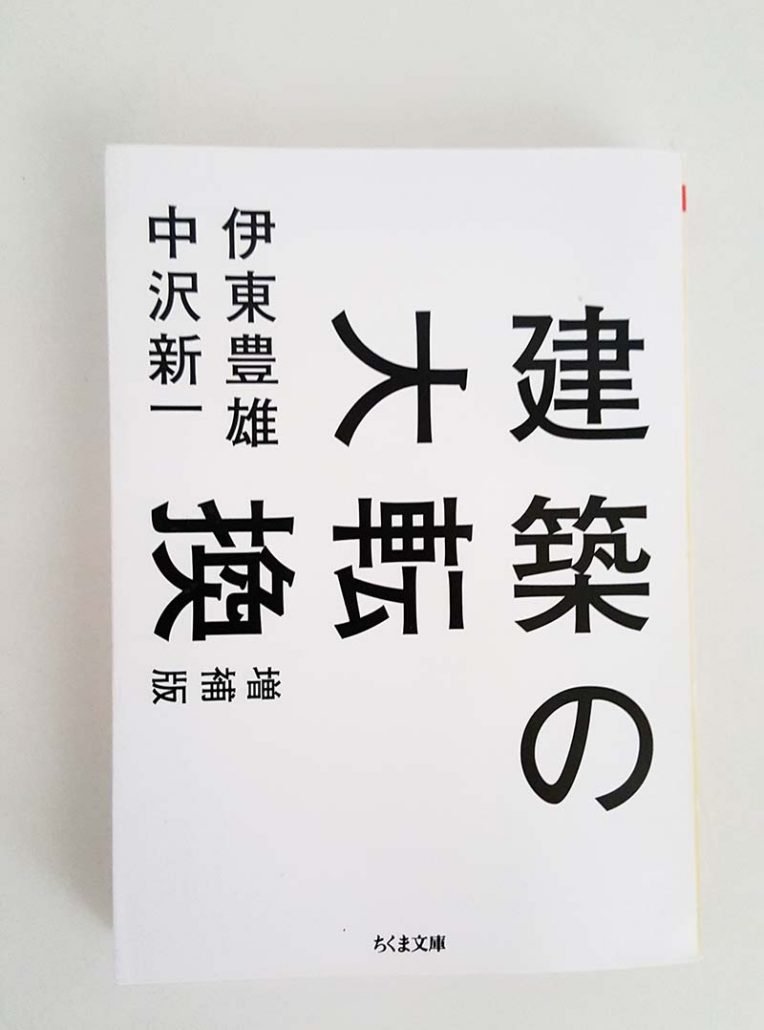 Ito expresses his excitement about Mediatheque in the Great Transformation of Architecture: “people typically use public facilities only when something is going on there. But Mediatheque has become a place for local people to hang out spontaneously, even when there is no special event. And I think that’s what public facility is all about.”

Because the structure survived the earthquake almost intact, Mediatheque quickly resumed various activities to help local communities recover from the disaster.  Through organic actions taken by people, who voluntarily gathered at Mediatheque, Mediatheque has grown into something much bigger than sleek architecture: it has become an interactive forum for local people to design and create their own agenda and to think through the paths forward, to heal from wounds, and re-build their community.

In the book, Ito steps back and questions the purpose of modern architecture, in which he has been playing a significant role.  “I have always felt that the world has become dominated by market economy, and architecture has become a tool to further enhance such a system.  I’ve been trying to be cognizant about that.  I’ve sought ways to push architecture back to its original purpose -which is to serve community, or to provide venues for people to share.  The way Sendai Mediatheque was used by local people gave me hope that we managed to maintain such sharing-driven communities in today’s highly commercialized world.”

One of the limitations of modern architecture that the earthquake revealed is in public infrastructure, Ito points out.  Current infrastructure heavily relies on placing something big, hard and sturdy in-between nature and humans.  It attempts to draw explicit and irreversible boundaries between nature and humans, in order to block the threats of nature from invading humans’ world.  “People say Tohoku Tsunami was a natural disaster, but I disagree,” says Ito.  “People blindly believed that existing embankments – big, hard and sturdy thing made of concrete – would protect us from natural threats.  We thought drawing explicit boundaries between nature and humans would solve all the problems. But it didn’t.  I think that thinking was fundamentally wrong.”

Ito strongly believes that the next generation of architecture should make nature and humans closer again by dissolving and blurring boundaries, and that’s how we can enhance the safety and resilience of our communities.  And ambiguous boundaries have always been part of Ito’s aesthetics: inside can be outside, and outside can be inside. Things could be more colorful and resilient when they are in flux. Nature and humans could be more intermingled and connected in an undefined manner to better deal with unexpected situations.

And that belief motivated him to form “帰心の会 (Kishin-no-Kai)” with other Japanese architects: Kengo Kuma, Kazuyo Sejima, Hiroshi Naito and Riken Yamamoto to support communities affected by the earthquake.  Ito produced many “みんなの家 (Home for everyone)” projects, as shown in this video.

Recovering from a devastating disaster is not just about repairing what’s been damaged. It’s also about re-designing the future of the affected communities, overcoming enormous loss and grief, and fulfilling their dreams again.  Whereas it’s a huge undertaking, important decisions are required to be made, quickly, and under various constrains.

Architecture plays a critical role in the rehabilitation process, through 1) temporary shelters that provide immediate safety for displaced people, and 2) the new built environment, in which people in affected communities will eventually resume working, learning, networking, interacting, and governing.  In the first phase, “division” – partitions and walls – is a priority because victims badly need privacy.  But when the relief process moves on to the next step, division suddenly becomes an obstacle.  Ito visited many temporary shelters, which are basically rows and rows of pre-fabricated units, divided and subdivided using lifeless walls to accommodate as many people as possible.  Many people were feeling isolated despite the physical proximity to their neighbors, because the design of temporary shelters and the way they were operated made it difficult for people to communicate, or do things together.  There wasn’t even an area to chat.

Realizing that disaster relief focused on division, not connection, Ito wanted to plant mini-mediatheques throughout the affected regions to restore a sense of community, and to provide a venue for affected to people to get together, share their feelings, and then start talking about how they would want to re-build their community and future.  Ito eventually named the project “Home for everyone.”

Unlike his prior works, which are filled with novel, peculiar ideas and breakthroughs, “Home for everyone” is based on a traditional Japanese home design that has long eaves, among other features. “Is this what Toyo Ito has to design? Should you be building something this ordinary?” A lot of people questioned, says Ito, but he was confident about his mission.  With Home for everyone, he was determined to offer an alternative to “divisive” architecture, common in disaster relief – and actually, also in modern architecture.

He wanted to remove divisions between people, divisions between “victims” and “those who help them,” and the division between humans and nature.  As he would reverse inside and outside in his design, he wanted to offer a house (device) through which people could reverse their roles to come to more organic solutions (regardless if you are a victim or someone from a relief agency), and face nature more resiliently, by connecting with it more directly.

People were welcome in this house to share their thoughts.  People were also welcome to come help build the house. “Back in days, there were no barriers between home owners and home builders. They would design together, work together and celebrate together when it was built. That’s how community used to work.  When we started engaging local people in construction process, they were energized.” Ito looks back. “It made this house special to them.”

Ito also wanted to warn the modern way of disaster management, which focuses on modifying the shape of nature or placing large chunks of concrete.  Even after the 3.11 earthquake, which proved that modern technology cannot tame the overwhelming power of nature, government still tries to rely on modern theory, Ito observes: if a 10 feet embankment didn’t work, we will build 20 feet this time.  “I don’t believe that kind of mindset would work moving forward.” It would also leave out local peoples’ thoughts and feelings from the rehabilitation process, Ito worries.  Local people would not agree, for example, that they should move somewhere else to avoid future risk, based on some assessment conducted by some experts they don’t know. They’d rather seek ways to cope with nature in their familiar home ground.

Ito wanted to provide venues for people to talk about how to design their community, which could be more resilient and sustainable. Architecture could be more than buildings: it could be a venue that promotes sharing among people, and connects people with nature more directly.

“I am ready to move on,” declares Ito.  “Working with people in disaster-ridden Tohoku, which still maintains sharing-driven communities, I renewed my determination to seek better way for architecture to relate to the society and communities.  It’s a departure from architecture that prioritizes advancing design and technology, fostered by modern economy.  It’s going to be a big transformation for architecture.”

More on 3.11 and architecture

We are all in this together: re-thinking design & architecture