Architect Toyo Ito has been leading a variety of local revitalization projects on a small yet history-rich island called Omishima. Located in the beautiful Seto Naikai Inland Sea in Western Japan, Omishima is home to the Toyo Ito Museum of Architecture, Imabari, through which Ito is actively collaborating with local communities.

Although stunningly beautiful, Omishima, like many other rural regions in Japan, has been suffering from a declining population. As a result, tangerine growing, which used to support the local economy as one of the few viable industry on the island, is also shrinking. The current owners of the orchards are becoming too old to take care of the trees, but as young people leave the island, no one is taking over their jobs. 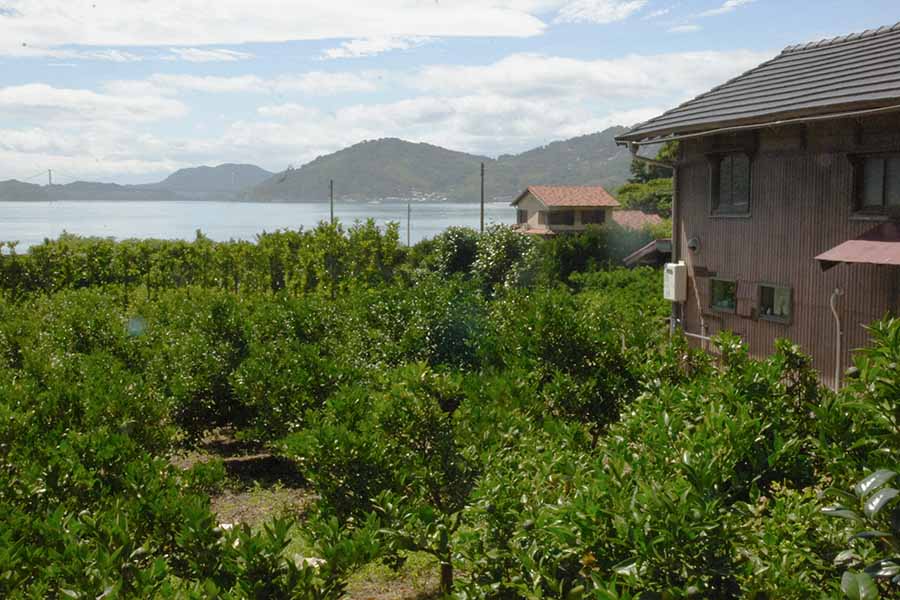 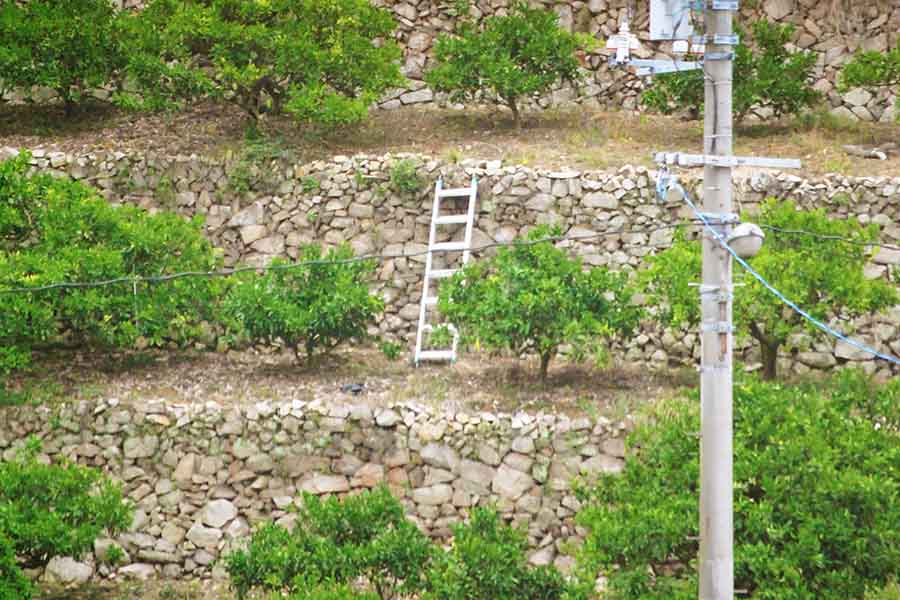 Omishima is blessed with a mild, relatively dry Mediterranean climate, but it lacks level land. People traditionally relied on terracing to grow citrus fruits, especially tangerines. You can see citrus orchards everywhere across this small island but an increasing number of them are being abandoned.

Concerned, Ito founded the Omishima Minna-no-Winery in 2015, an inspiring endeavor to convert abandoned orchards into vineyards, so that the relinquished agricultural assets could be transformed into new values and opportunities for the island.

The vineyards are located on top of a hill on the south coast of Omishima, overlooking the infinitely blue Seto Naikai. “This is the kind of place that you fall in love with,” says Yusuke Kawata, who moved to Omishima in 2015 to run the winery. “When I visited this island, I immediately wondered if I could grow wine here.” 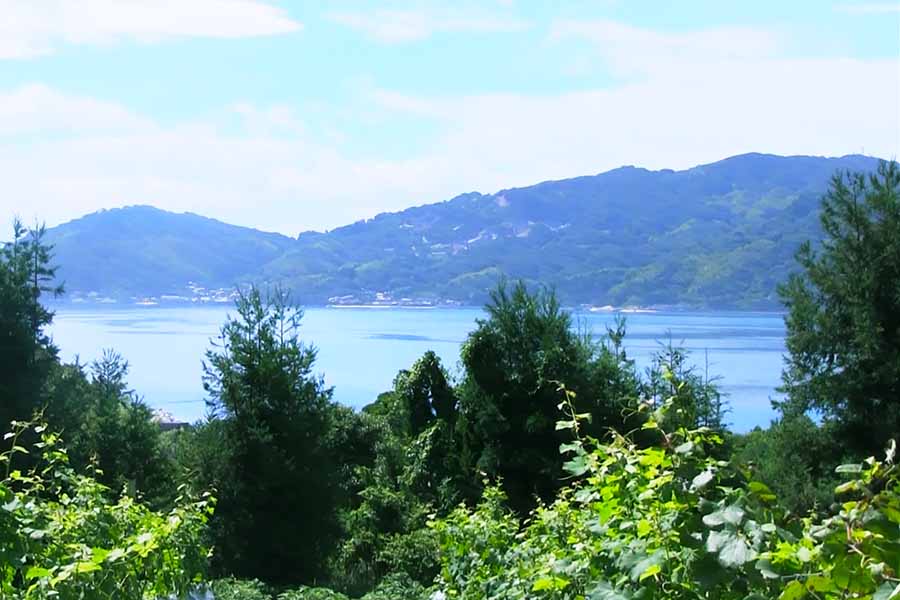 The vineyards overlook the Seto Naikai Inland Sea, which looks very calm. (It is not a lake!)

He recounts how the project started: “I knew Toyo Ito for years. When I heard that he was working with local communities in Omishima to re-invigorate abandoned agricultural fields, I immediately pictured the Mediterranean region and its wine industry, even though I have never been to the island.” Sure enough, the Seto Naikai enjoys a mild Mediterranean climate, and this is the very reason why the region traditionally grew citrus. But over time, the citrus market became too competitive for small-scale farmers in Omishima, and more and more people gave up cultivating tangerine trees. Kawata, who had been studying wine making at the University of Yamanashi at that time (Yamanashi is about 3 hours from Tokyo and is one of the major wine-making centers in Japan), continues: “Although the region has been known for citrus, I had never heard of ‘Seto Naikai Wine,’ nor knew anyone who grew grapes in the region.” It sounded like a missed opportunity. “I had to persuade Ito that wine making in Omishima would be be a super cool project.” Ito, a wine connoisseur himself, became excited. He asked Kawata to go to Omishima to find out if it was feasible to grow grapes and make wine there. 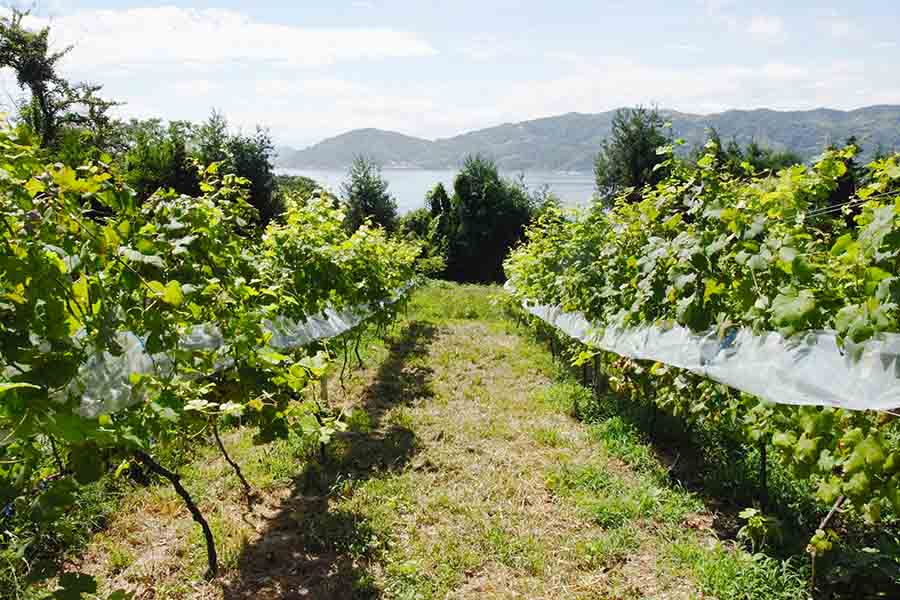 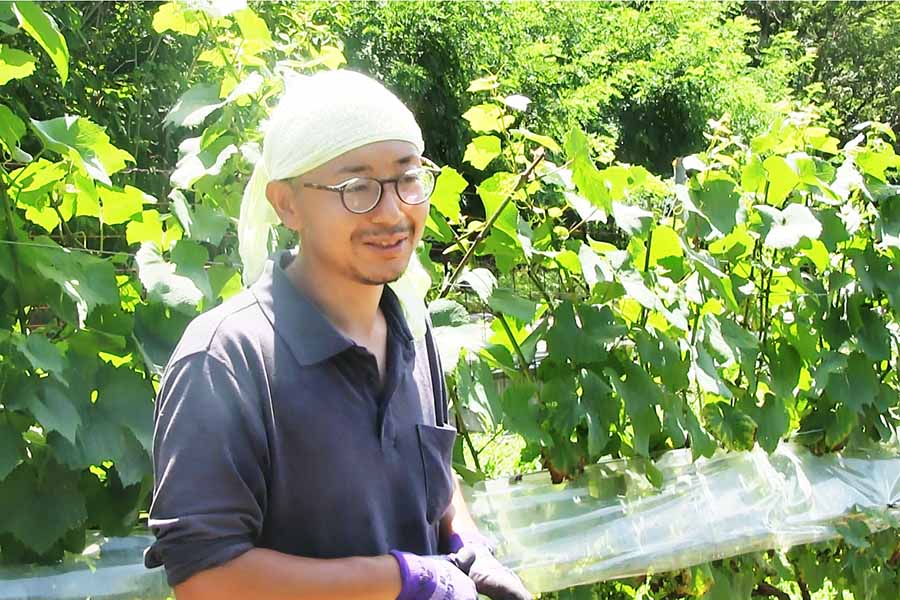 Yusuke Kawata started his career as a sommelier but his passion for wine led him to pursue a degree in wine making. He currently takes care of the vineyards and manages the wine making at the Omishima Minna-no-Winery.

Kawata traveled to the island in the same year (2015), did field research, and met some people who later became the integral members of the Omishima Minna-no-Winery. Ryu Morimoto agreed to lease her property and convert old tangerine orchards to vineyards. Yutaka Hayashi, who had moved to Omishima about a decade earlier to grow organic citrus and revitalize local agriculture/heritage, was more than ready to help with the project when he heard about the idea: “Sounds like you already have someone who is willing to lease her property. Why don’t we start planting grape trees? Let’s do it.”

Yutaka Hayashi led the soil preparation in late 2014 and the team planted the first batch of young vines in April 2015. The pictures are from the exhibition: “Protecting = Creating the Sacred Island of Omishima” held at the Toyo Ito Museum of Architecture, Imabari, through June, 2019. It is a great opportunity to learn the history of the Omishima Minna-no-Winery.

That level of enthusiasm from local people encouraged Kawata. As it was time for him to start working on his thesis to complete his degrees, he chose “wine making in Omishima” as the subject and moved to the island in his senior year. That was June, 2015.

For Kawata, wine making in Omishima is about far more than growing grapes and making wine. First of all, the environment is so unique and incomparable to any place else, he says. “I grew up in a rural, coastal town in Shizuoka (that faces the wide Pacific Ocean), so I thought I knew what life is like in a small, coastal village. But this island totally blew my mind.” Unlike the vast Pacific Ocean, which could be strong and wild, nature here is subdued, but profound.

In addition, the people in Omishima are very open, Kawata says. “They are ready to help people who are in need, even if they have just moved from somewhere else. They don’t mind letting us help them either. It was easy for me to build a healthy help-each-other-out relationship. As a matter of fact, local people provided the labor needed to convert abandoned orchards by getting the soil ready for grape planting.”

The activities in 2016-2017. Local people organized a team and helped the vineyards to get going. Although the first harvest was almost ruined by wild bores, they are making steady progress. 2018 was their second year of wine making, although it is still a small-scale pilot production.

Kawata adds: “Another important thing that makes this whole endeavor special is that we are leasing abandoned grove. Even though it was ‘abandoned,’ the place still preserved old trees that were once taken care of by someone with a lot of passion and devotion. It was painful to cut down those trees when I could sense the precious history that kept this orchard going, even though I knew I had to do so. It is definitely the dedication and pride we are inheriting by growing grapes here. It is humbling. I renew my commitment every time I think about the people who were here growing tangerines for years and years.”

So what kind of wines will this special place produce? “You can summarize it by the French word ‘terroir.’ Each region and each vineyard has unique soil and climate, that essentially determines the quality and uniqueness of wine.” In Omishima, the soil is decomposed granite. It drains water quickly and is good for grape growing. But this also means it requires frequent watering and adding fertilizer. It takes longer for grapes to grow, but the fruits become large and condensed. It is said that the grapes grown in granite soil have a good, strong aroma. 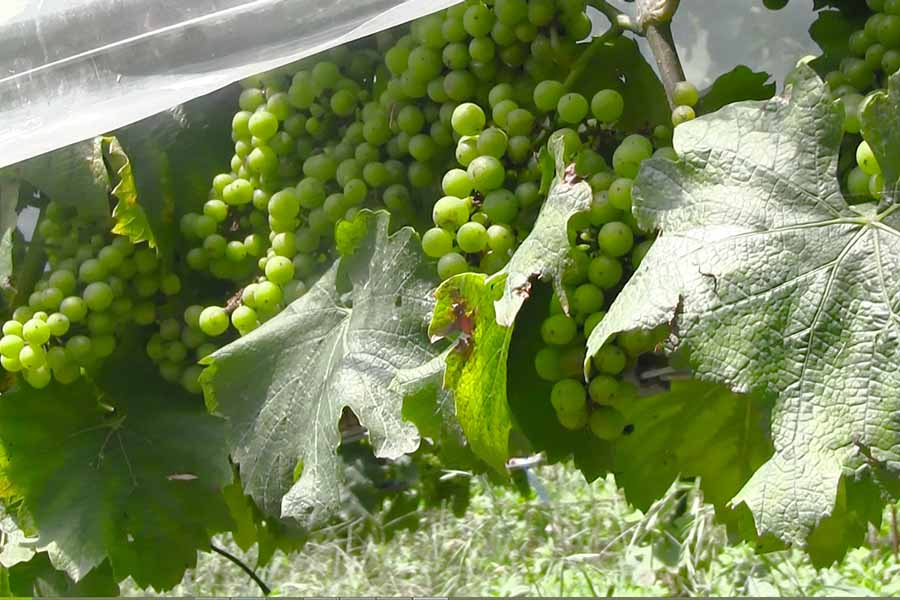 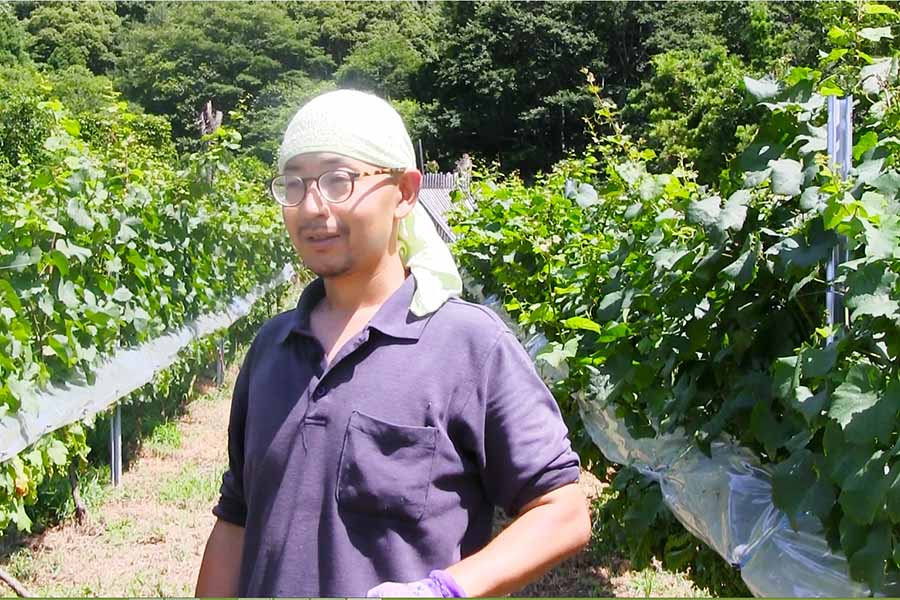 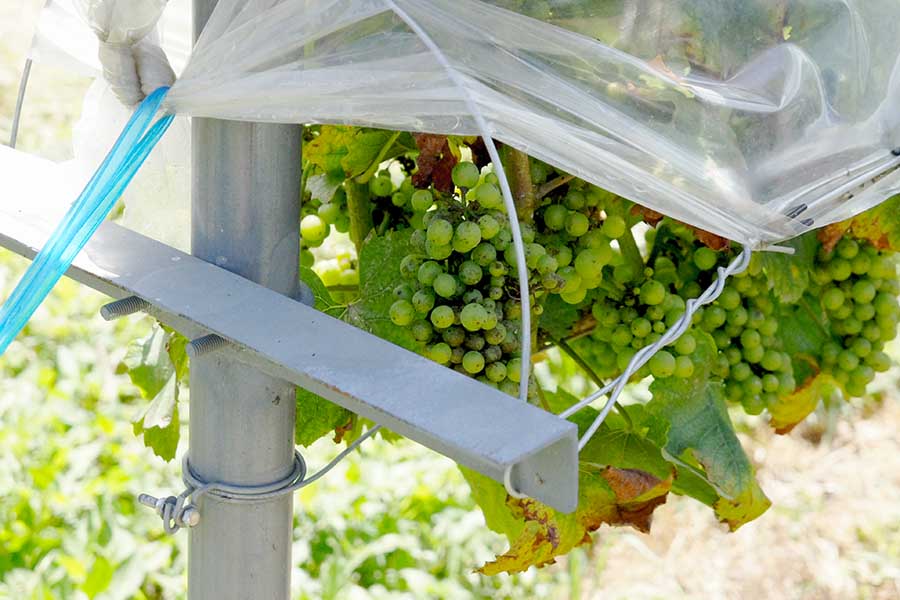 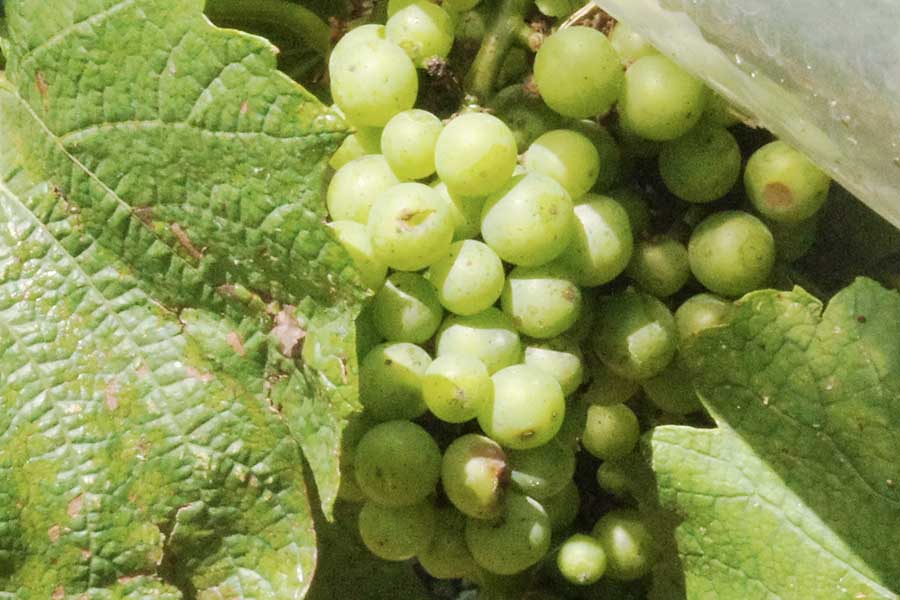 The year 2017 marked their first wine making. Since it was still at small-scale, they outsourced the operation to a third party brewer on the mainland. Kawata says, “It definitely had a signature aroma compared to the wines made elsewhere.”

By the way, the expression “みんなの (minna no)” in “Omishima Minna-no-Winery” means “shared by us all,” almost implying “of the people, by the people, for the people.” So “minna no winery” means “winery for all.” Toyo Ito coined the name “Minna-no-Ie (Home-for-All),” when he became involved in a disaster relief project in Tohoku (Northeastern Japan) in the wake of the devastating  M. 9.0 Tohoku Earthquake and Tsunami on March 2011, which is also known as 3.11. Ito’s project led to the construction of a gathering place, or a community room (the “Home-for-All”), for displaced victims in multiple disaster-hit areas (Just to show the scale of the damage, the total number of people who were forced to evacuate after the 3.11 is estimated to be close to 500,000).

In his book “あの日からの建築 (meaning architecture after the 3.11), Shueisha Publishing, 2012,” he says that the reason why he came up with the name “Minna-no-Ie” – which sounds rather banal and clichéd – was because he felt it was the only appropriate name to communicate with many of the victims who were old people from rural areas. Facing the harsh reality that the modern system, including modern architecture and infrastructure, was so helpless in the wake of a ferocious natural disaster, and that cutting-edge, complex and sophisticated architectural approaches could do little to help those who lost everything after having spent their entire life embraced by nature in the rural Tohoku region, he felt that he needed to face them humbly as an individual, not as an accomplished architect. For Ito, naming his project “minna no” showed his renewed determination to open his architecture to people, or “minna.”

It is inspiring that Ito named the winery project in Omishima the “minna no” winery, or winery for all. By engaging in various community revitalization projects in Omishima and other parts of the country, Ito is literally in the process of opening the potential of architecture to broader society. And by committing himself to a wine making business with a big ambition to help the local community regain the power to self-sustain, it seems like he is also attempting to open the business to the people. Most of the businesses today are not “of the people, by the people, for the people” because they are designed to serve their shareholders who usually care only about efficiency to ensure a higher ROI. As a result, companies are often forced to become a harsh profit-maximizing entity, regardless of the feelings of employees or customers. But what if we could have a company “of the people, by the people, for the people?” What if we could get together to solve shared problems by unleashing shared passions?

That’s the spirit of the Omishima Minna-no-Winery. Local people are actively engaged in grape growing, wine making, and enjoying the progress of this brand new winery. It is as if they are growing a new business as they grow the vines. It’s their baby. And there are also groups of people who are supporting the project remotely. 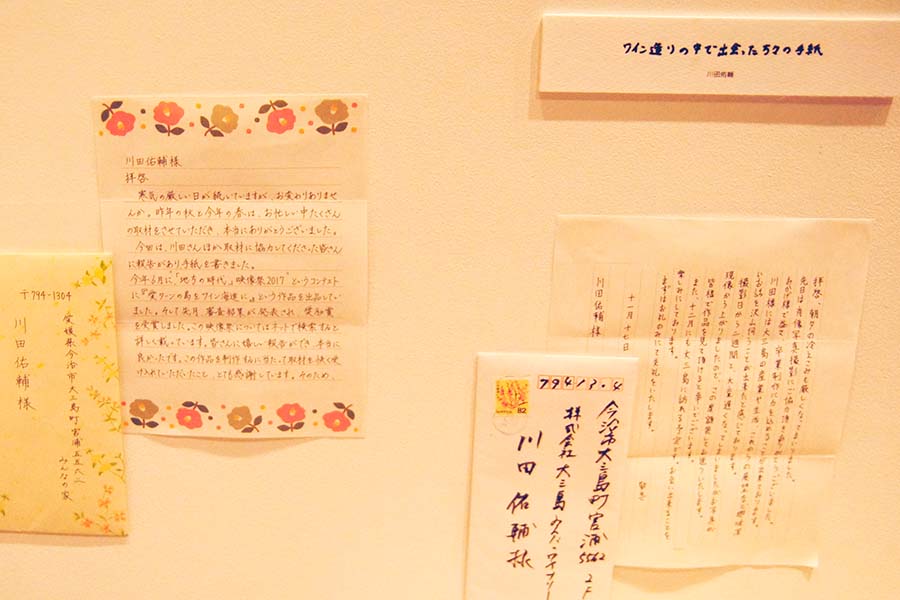 Yusuke Kawata and the Omishima Minna-no-Winery met and interacted with many people across the country, for a variety of reasons. Some are supporters, some are media that are covering the story of the winery, some are experts giving them professional tips. The letters are exhibited at the Toyo Ito Museum of Architecture, Imabari.

It is true that many rural areas are left behind from by a modern economy that only cares about efficiency, but it does not mean that people in rural areas have no values and/or assets and need help. Actually it is the opposite: they are hardworking, resilient people who know how to live in harmony with the environment. Flaws are rather on the side of the current economic system because it does not have the means to appropriately recognize the beauty and potential of the rural areas. They don’t need “help,” they just need projects in which they can unleash their ability. And that’s what Toyo Ito is trying to achieve at the Omishima Minna-no-Winery.

Kawata says: “Wine making is very time consuming. It takes at least a 20 years for the vines we have just planted to mature. So I will be here for a long time, taking care of them and making wine. This will be my life-long project.” Their endeavor to create a resilient business “of the people, by the people, for the people” has just started. But they are committed to grow it over many years.