Toyo Ito interview at Omishima Island: Architecture then, now and next (2-1)

Back to Toyo Ito Interview Part I

Part II: The 3/11 and the Limits of Modernism

Part II of the Toyo Ito interview is focused on the “3/11” – the staggering magnitude 9.0 earthquake that hit Northeastern (Tohoku) region of Japan on March 11, 2011, which triggered a devastating tsunami with waves as high as 20 meters and the meltdown of the nuclear power plant in Fukushima. It has become a decisive factor for him to define his new missions.

In addition to the heart wrenching damage, (more than 20,000 lives lost, 120,000 lost homes, the annihilated coastal communities, the invisible yet destructive radioactive threat) the sight of the ferocious tsunami that literally gobbled up miles and miles of solidly engineered steel-and-concrete buildings and infrastructure left a deep sense of defeat in many Japanese. It was a bitter “scales-falling-from-our-eyes” moment that reminded people that what they believed to be invincible technology was still far from capable of conquering natural threats. No one was prepared to accept such a helpless collapse of everything that the “modern” world has achieved. 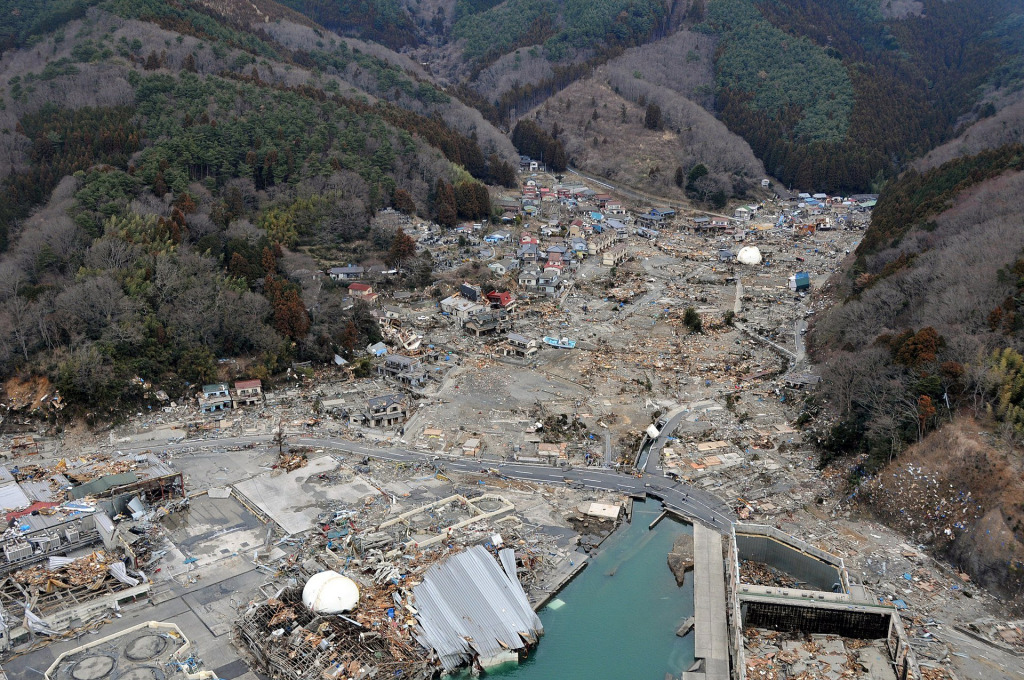 The coastal towns in Tohoku area devastated by the 3/11 earthquake and tsunami. [Public domain]

Toyo Ito has a slightly different take. Even before 3/11, he was already skeptical about the aggressiveness of the global economy, which has gobbled up the architectural industry to use it as a tool to make every community uniform, to pursue improved efficiency, and to celebrate the power of large capital cities.

Through his disaster relief work in the communities hit hard by the 3/11 (Read about his Home-for-all project) – remote, rural areas far from economic centers such as Tokyo – he reconfirmed that he was no longer interested in urban projects commissioned by and for the efficiency-first modern, global economy. He renewed his passion to create/offer places through which people could foster organic, rewarding, happy relationships with other people, surroundings and nature.

The society we live in today is controlled by the power of the global economy. It is large money that decides when/how to build or demolish buildings, and their will easily overrides the moral or ethical aims of individual architects. I was feeling that it had become almost impossible to achieve my dream which was to design venues/opportunities that spur spontaneous and organic encounters between people. Such an approach would be completely at odds with today’s economic agenda which is only interested in dividing communities, compartmentalizing people and modularizing activities for the sake of improved efficiency.

You write and talk a lot about your experience surrounding the 3/11 recovery projects. How important were they for you?

Until 3/11, I considered architecture almost indistinguishable from urban architecture because most projects took place in large cities where capital is concentrated. But when I visited the areas hit hard by the disaster, which were mostly rural, small and old communities, I was reminded that the victims (many of them old people worked as fishermen or farmers) who lost their homes and hometowns had little to do with the advances or excitement achieved by the modern economy. When I first met with them and proposed my approach/plan for recovery, I realized that they had no interests in my expertise and accomplishments in urban architecture. They didn’t need to me to tell them what a recovery plan should look like, because they knew it wasn’t going to help them. It was an eye-opening experience to try to reconcile what I could offer and what the victims wanted. We had a series of dialogues – literally face-to-face meetings – so that we could understand what it really meant to re-build the “home” that they lost in such an excruciating and painful way. Our final recovery plans were the product of such close dialogues that incorporated what local communities really needed. That’s what we proposed to the government.

But things didn’t go easy for many victims, who yearned to go back to live in their old neighborhoods by the sea that were mercilessly turned into piles of debris by the tsunami. As it turned out, it was almost a wish that couldn’t come true because the government-led rehabilitation projects recommended that victims move to new residential developments at higher altitudes in order to be protected from next tsunami. The old communities would be buried, transformed into large-scale seawalls in order to enhance safety.

Unfortunately, our proposals didn’t go hand in hand with revitalization plans led by the government, which turned out to be nothing but a hardline agenda to push modernism.
Are you familiar with seawalls? Some of the coastal areas in Tohoku already have L-shaped seawalls of about 5 meters because they have historically been vulnerable to tsunami. But unfortunately, 3/11 tsunami was so strong that it toppled them and destroyed the seaside communities. And this was the reaction from the government: “5 meters was not enough to resist 3/11. The only thing we can do to protect us from the next 3/11-scale tsunami is to make the walls higher, bigger and longer. That’s how we will ensure people’s safety next time.” The government believes that separating oceans from coastal communities is the answer to deal with daunting natural threats. So the new walls will be 10 meters high, and in order to support such a height, the foundation – a triangular shaped base – will be as wide as 80 meters. Gigantic. I can’t believe it.

And since the new walls are pyramid-shaped, you need substantial amounts of soil to fill the void between the walls, right? Where does the soil come from? You “cut off” the top of nearby hills and haul down the soil that was scraped off. Once the hill surfaces are flattened, you build new housing developments there. These will be the “higher altitude communities” I just mentioned, into which the victims will be moved. After the residents are gone, the old coastal communities will be buried under the seawalls.