The Many Faces of shoji – traditional Japanese screen door

Shoji is traditional Japanese screen/sliding door/partition made of wooden frame and paper. It’s been used in lieu of walls in Japanese rooms for hundreds of years, despite its fragility and poor insulation capacity. Any Japanese who grew up in old-style house would remember poking holes or scribbling on paper screen as a child (and getting scolding from adults), or shivering from chilly winds coming through the gaps between the shoji frames. Living in a house with shoji was almost like living only with thin clothes on a bare skin: you were very close to the outside environment. It’s like a sunroom when it’s beautiful outside, but you are also directly affected by uncomfortable weathers. When Japanese society rapidly modernized over the last several decades, people jumped on the benefits/comforts of protective modern houses that featured sturdy, insulating walls and glass windows. Shoji quickly became so yesterday.

But after aggressive pursuit for modernization, people are increasingly realizing the value of what they inadvertently gave up as they chose convenient comfort over aesthetics – not only design aesthetics, but also the philosophy to live beautifully and in harmony with nature. Especially since we have technology that can possibly overcome the disadvantages of shoji, we are in a good position to re-discover and leverage its beauty.

The current form of shoji, made of finely cut/finished wooden frame and translucent yet study paper (or “washi,” that is made using traditional plant-based materials and techniques), cemented its style during the Muromachi era (14th – 16th century) with the emergence of Shoin-zukuri architecture style (the previous style, Shinden-zukuri, was even more open toward outside). But it took another couple of centuries for shoji to become available for wider population, because “washi” had to become mass produce-able. The Katsura Rikyu Imperial Villa, built in the 17th century, is a prime example of how shoji was used in traditional buildings. 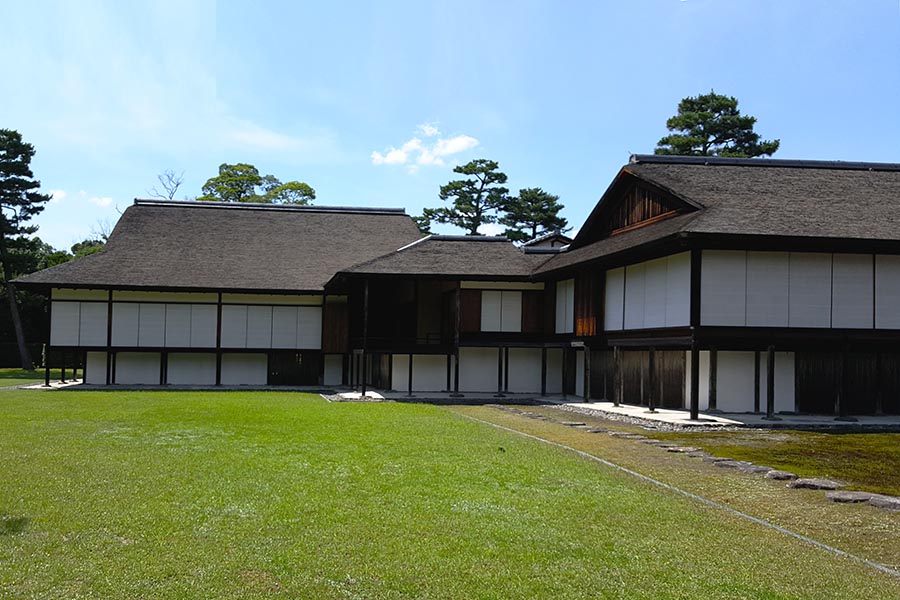 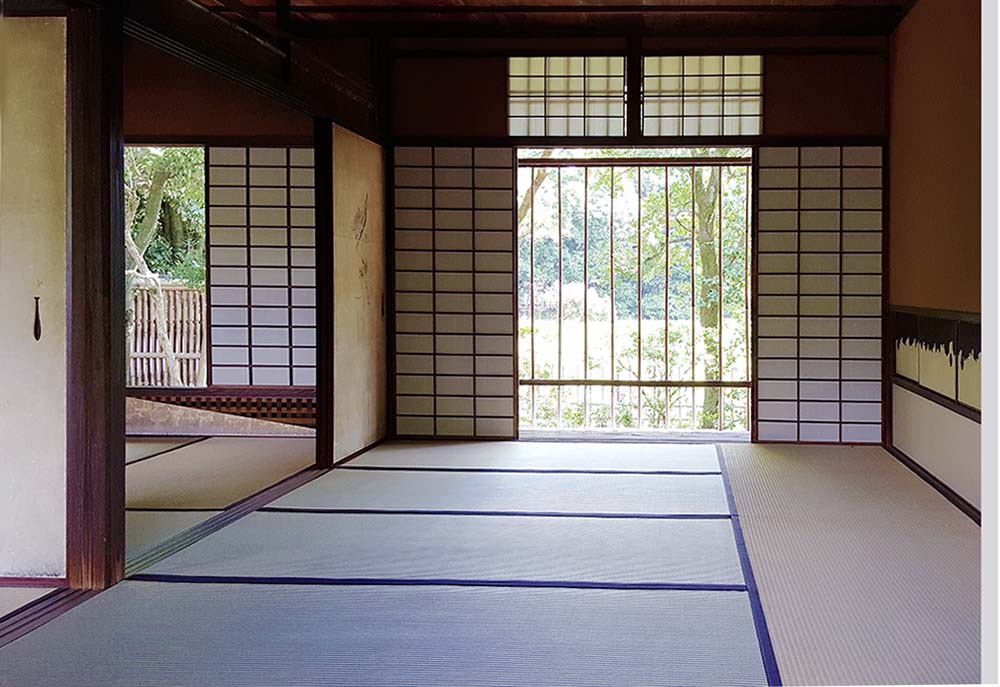 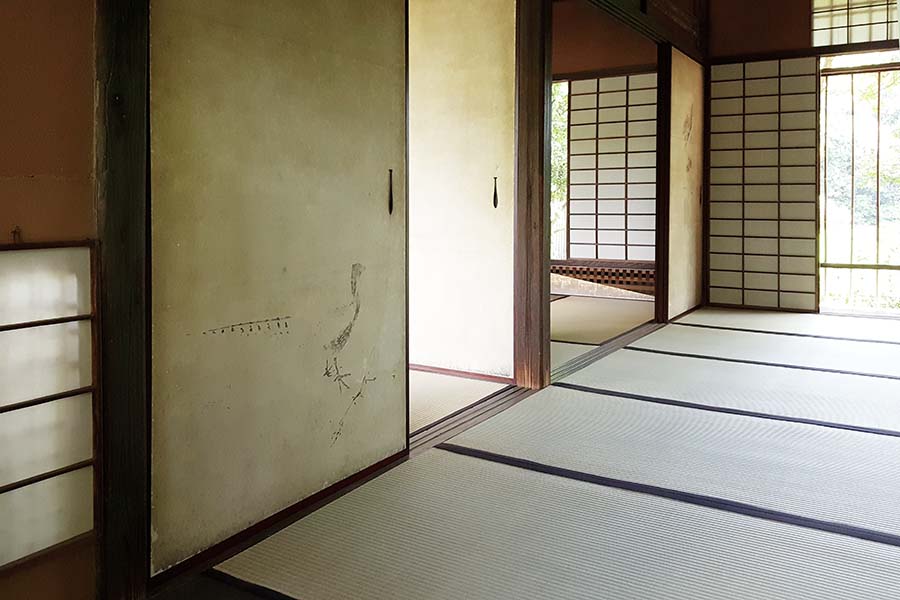 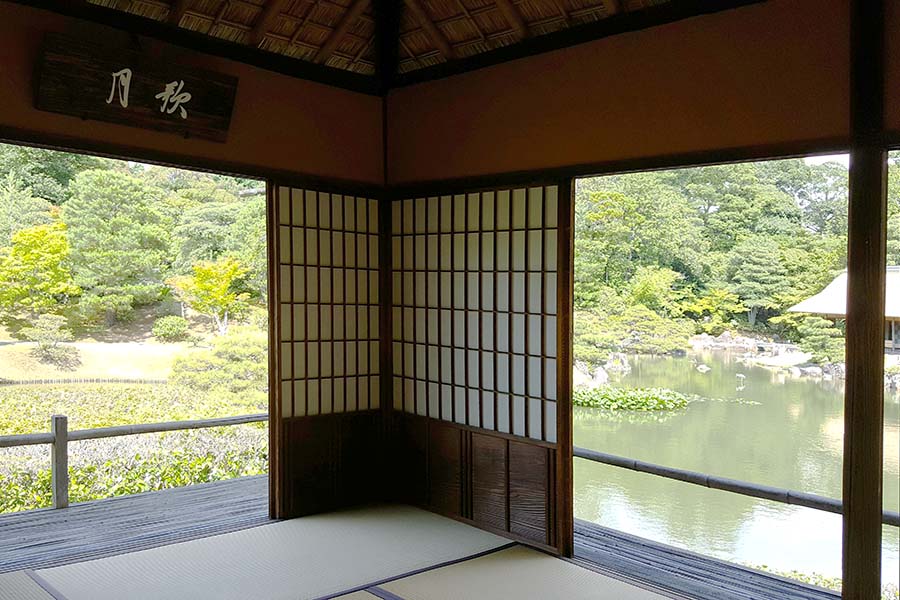 As you can see, the aesthetics of shoji are in its delicate/subtle whiteness, flexibility/compatibility with nature, and fine lines. It’s almost equal to the aesthetics of traditional Japanese architecture itself: it’s obvious that shoji has been playing a critical role defining what Japanese house was all about. Now let’s walk through some of the pros and cons of shoji characteristics so that we can overcome its disadvantages to fit it in hyper-modern 21st century living environment.

When I was a child, I used to hear people say that you could tell which house had small kids: just look at shoji. How can a child stay away from tearing a big sheet of paper just in front of him/her? Broken shoji screen was almost considered “natural disaster” for a family with young children. Shoji is definitely high maintenance. Japanese architect Kengo Kuma, known for his extensive use of natural materials in his works, once attempted to design a chashitsu (a hut for tea ceremony) using paper at the request from the Museum of Applied Art in Frankfurt, Germany. But it was turned down because the museum thought that “German visitors would damage such a fragile building in a day.” Kuma ended up using synthetic fiber in order to achieve paper’s thinness/translucency while maintaining structural strength.

Living in a fragile environment requires some behavioral training. We usually alter/reinforce the envelope so that we don’t have to pay attention to it. While it’s easy and comfortable, you become oblivious to what surrounds you. But paper does the opposite: instead of forcing the environment to conform to us, it forces us to conform to the environment. It regulates our behaviors. If you thought: “what’s the point?” then surround yourself with natural, fragile materials even just for a little bit, since you won’t understand until you feel it. When you have to be careful about your interaction with anything, you become very conscious and start activating your senses to their fullest. Your eyes, nose, hands and feet – every part of your body is now keenly focused, ready to start discovering subtle beauty such as texture of different elements, color gradations or even how the sunlight changes its shades as time goes by. Those are the things you’ve never paid attention before, and you will be surprised how full you feel when your senses were able to synchronize with such beauty. If you know Konmari, who advocates that you need to fold your clothes super neatly, it’s the same idea. Tea ceremony is culmination of behavioral training that unleashes our inner potential to their fullest. 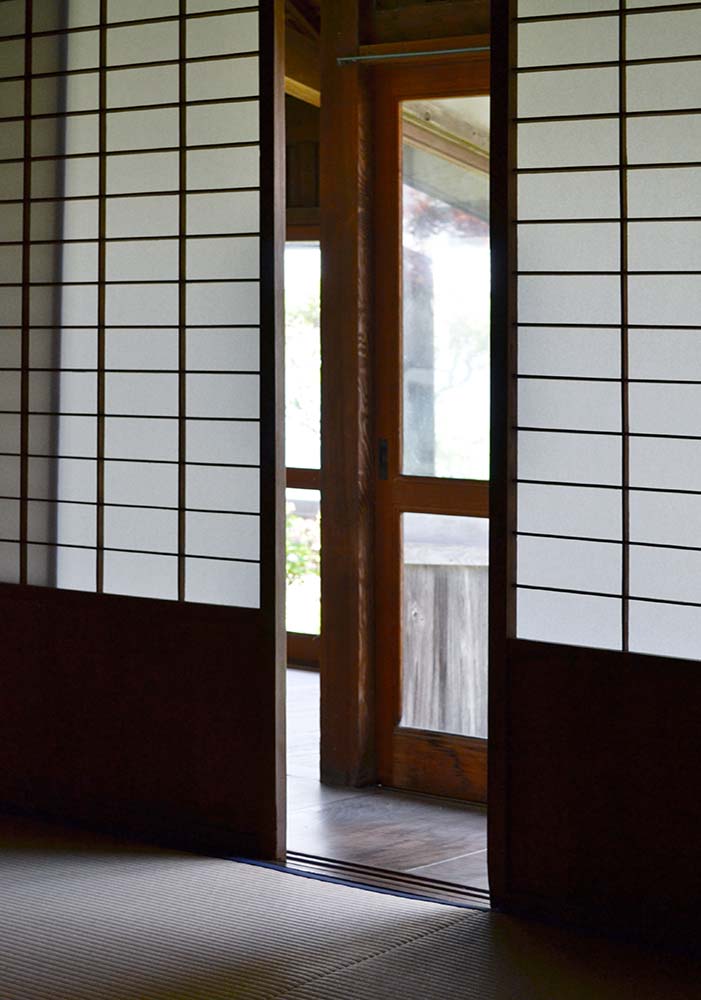 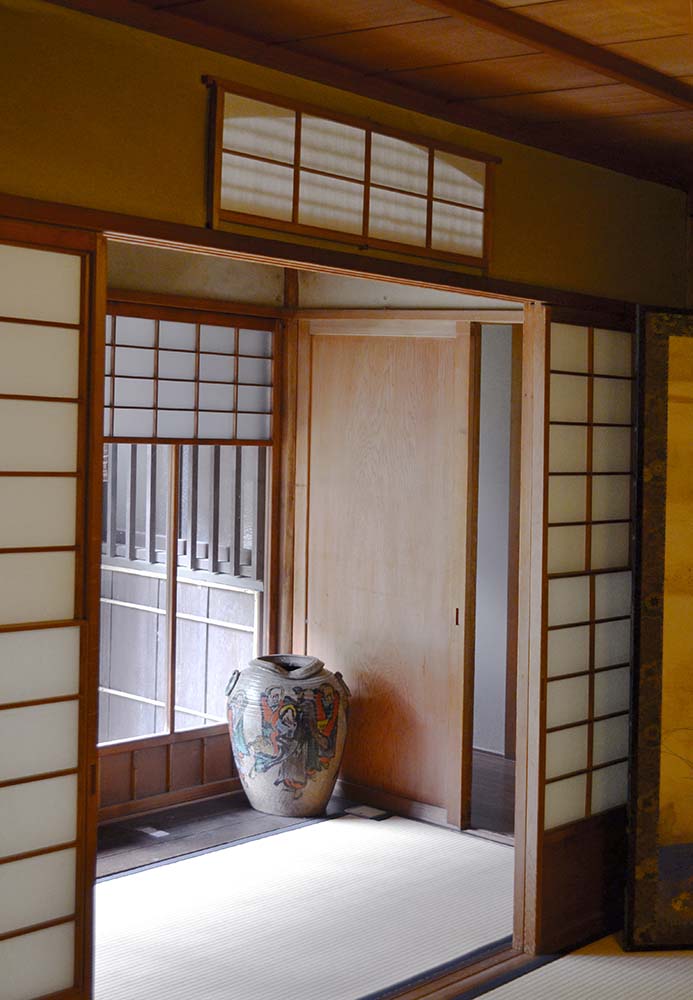 The Katsura Rikyu Imperial Villa (mentioned above) has been highly praised by Western architects including Bruno Taut and Walter Gropius for its simple yet delicately proportioned form (both ended up writing about Katsura). So when Le Corbusier finally visited Japan, fellow Japanese architects brought him there. But to their surprise, he wasn’t that impressed, according to “建築史的モンダイ” written by architect/historian Terunobu Fujimori. Le Corbusier was disturbed by “too many lines” of Katsura. “His ability to observe elements are so sharp,” impressed Fujimori. “No one else never pointed that out.” And sure enough, the aesthetics of traditional Japanese architecture style are defined by many fine lines – a lot of vertical lines and some horizontal ones. Shoji adds many lines. When you introduce shoji design to your room, pay attention to the number of the lines you are adding – both vertically and horizontally – to make sure it’s in balance with other elements, especially if your room is not as empty room as photogenic Japanese rooms. 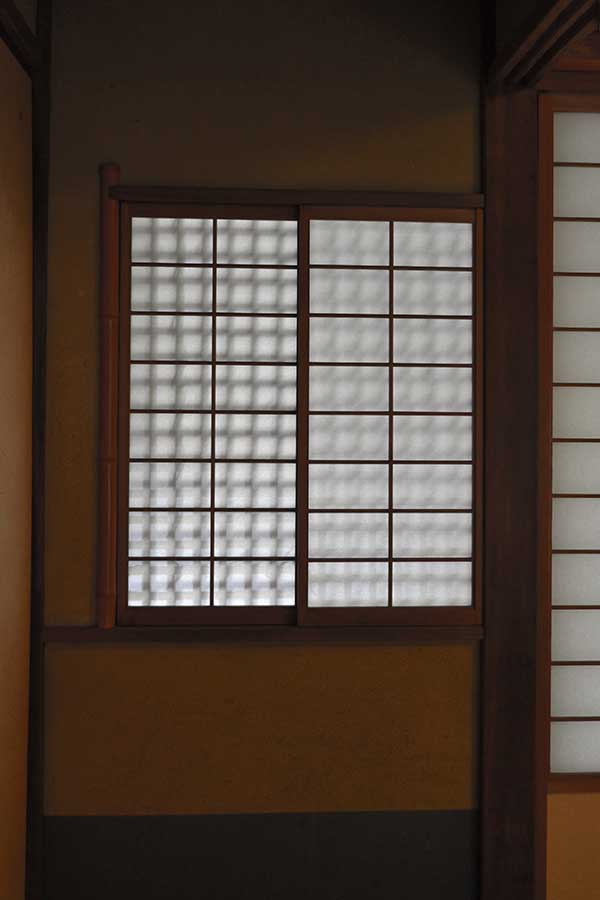 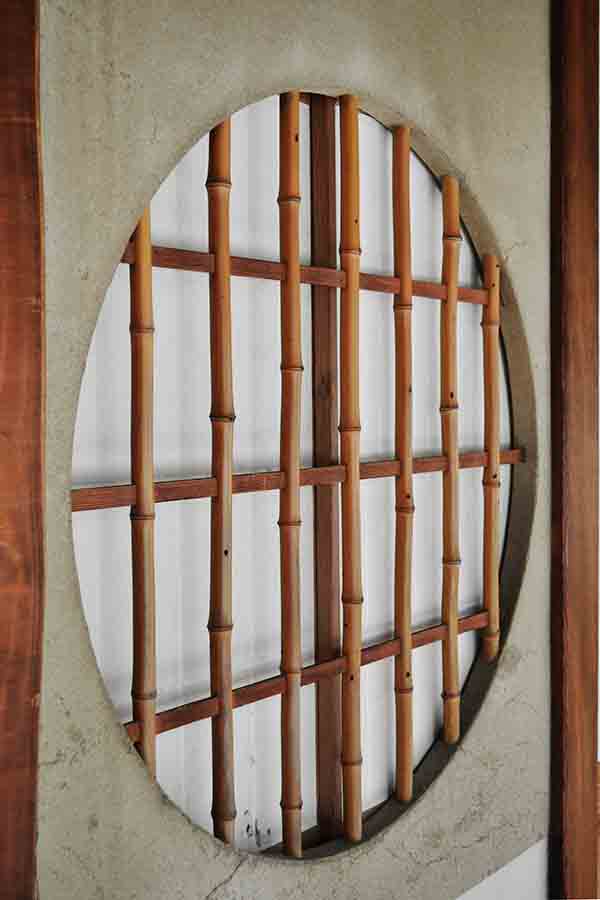 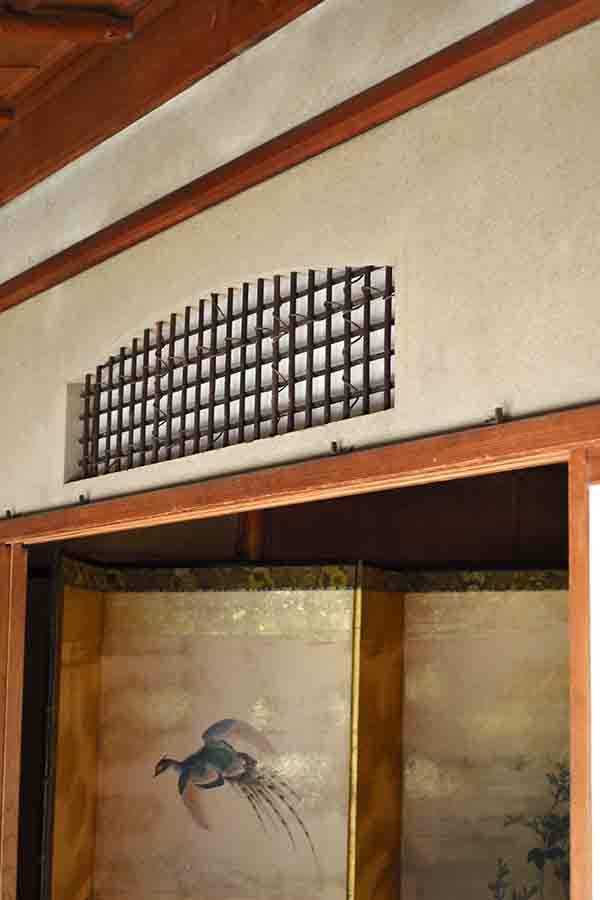 3) Shoji controls the amount of light

Shoji is not transparent like glass. Rooms inside shoji doors can bet dim. But that was the whole point of chashitsu, which was often built toward North – the gloomiest of the four directions. According to traditional Japanese aesthetics, things are beautiful because they keep changing. Seasons change, morning becomes night, but then another day will come. Living things are born and eventually die. True beauty is always elusive, undefinable and in transient moments. So beauty also resides in dimness, or the way light that come through shoji screen keeps changing. If you have any rooms that look gloomy, you may want to think how you can make most of it. 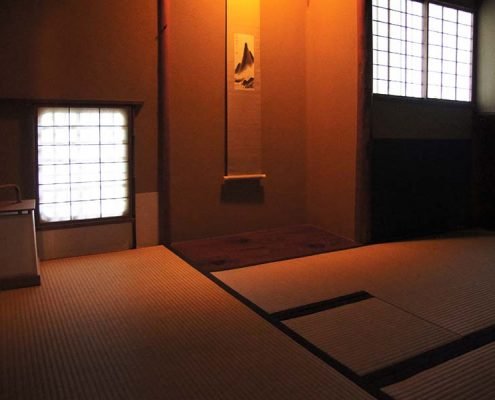 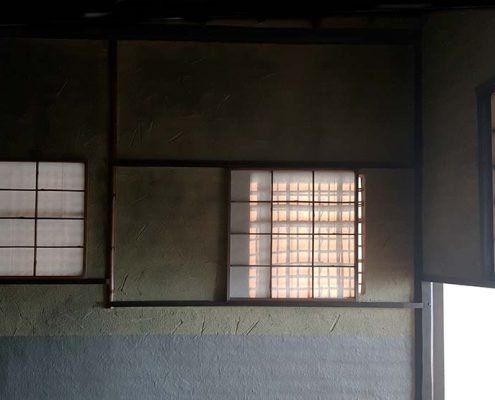 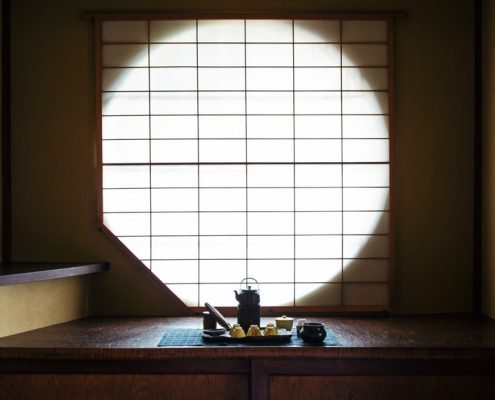 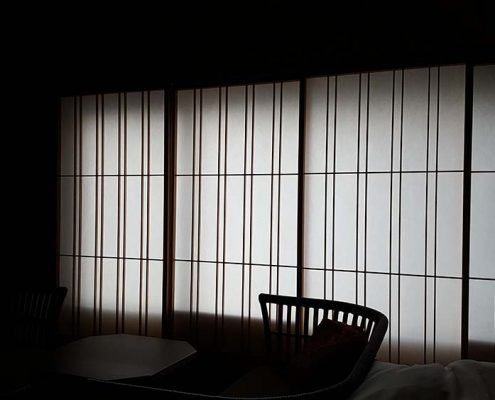 4) Shoji connects inside with outside seamlessly

Last but not least, shoji keeps the interior of a house seamlessly connected with outside since they are very light and easy to slide/remove. When it’s really nice, you can take all of them out. It’s also possible to make part of shoji glass. A shoji screen with glass area at a lower part is called yuki-mi (snow-viewing) shoji, because you could watch snow quietly falling in your garden as you sip a cup of tea inside the room. Having shoji makes you keenly aware of what’s going on outside. 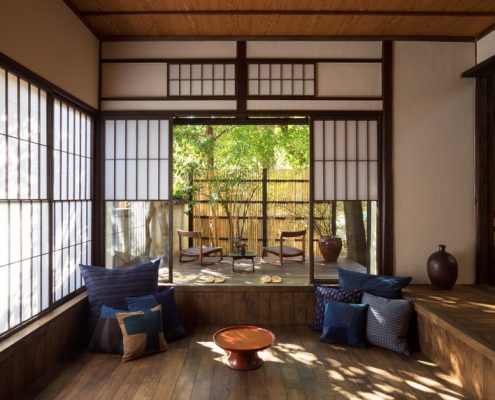 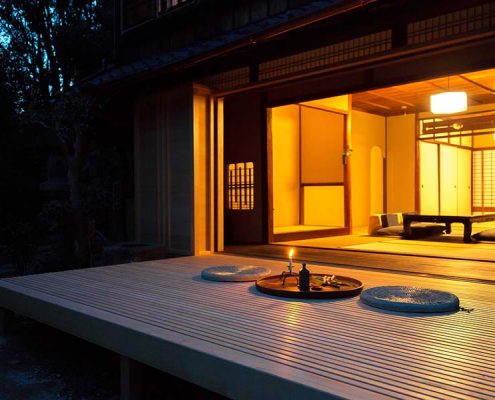 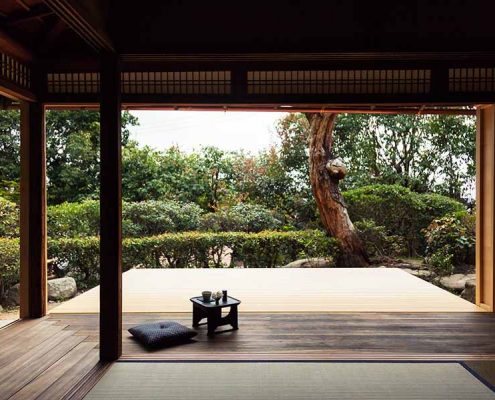