What is the architectural significance of the so-called “tiny house”? It is an interesting question because we tend to see the current tiny house boom as a new/alternative lifestyle choice, rather than an architectural movement: It has been led by actual dwellers, not by forward-looking architects and/or a profit-seeking industry that typically targets large buildings or communities. In that void emerged the people’s quest for small architecture, and professionals were caught off guard…well, not really. “We subconsciously knew that our aggressive pursuit for technology-dominated, large, sturdy and divisive architecture would hit a plateau at some point and start revealing its weaknesses,” observed Japanese architect Kengo Kuma in his book Small Architecture (Iwanami Publishing) written in 2013. “Time is ripe to re-discover the beauty of smallness, as nature repeatedly has shown us through catastrophic events, such as disasters, how vulnerable our technology still is, and will remain to be, in the face of its overwhelming power.” (Small Architecture was written in the wake of the devastating M 8.0 earthquake that hit Northeastern Japan in 2011).

As the book is dedicated to a discussion of the potential of small architecture to replace its ever-growing, taller, ultra-monumental modern counterparts. Kuma analyzes the philosophical and architectural (structural) characteristics of small buildings. Philosophically, it is about autonomy. Structurally, it is about relying on things that already exist in the natural environment. Together, it’s about re-discovering our own resilience to connect with nature using our own body and pursuing profound happiness without the massive, inflexible, irreversible and divisive mass of concrete. 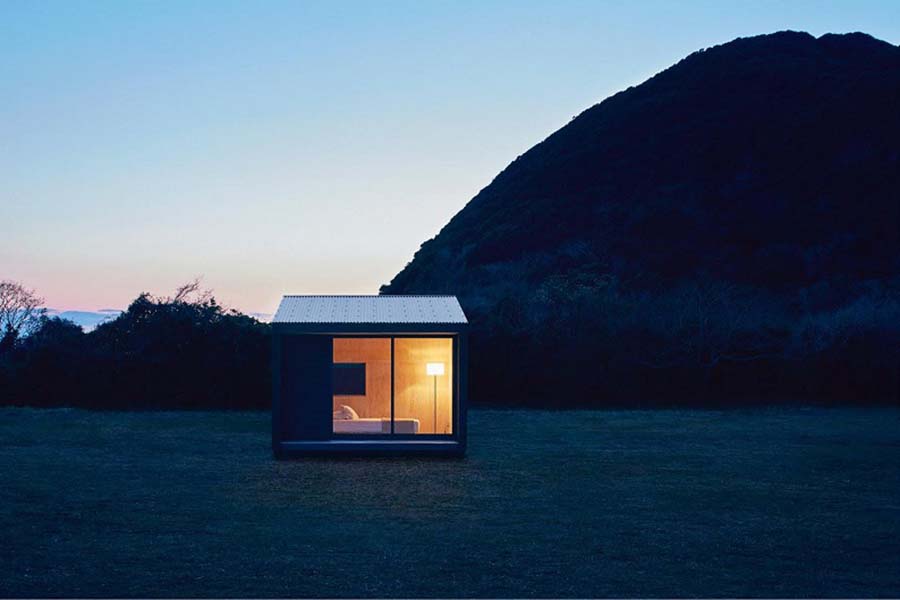 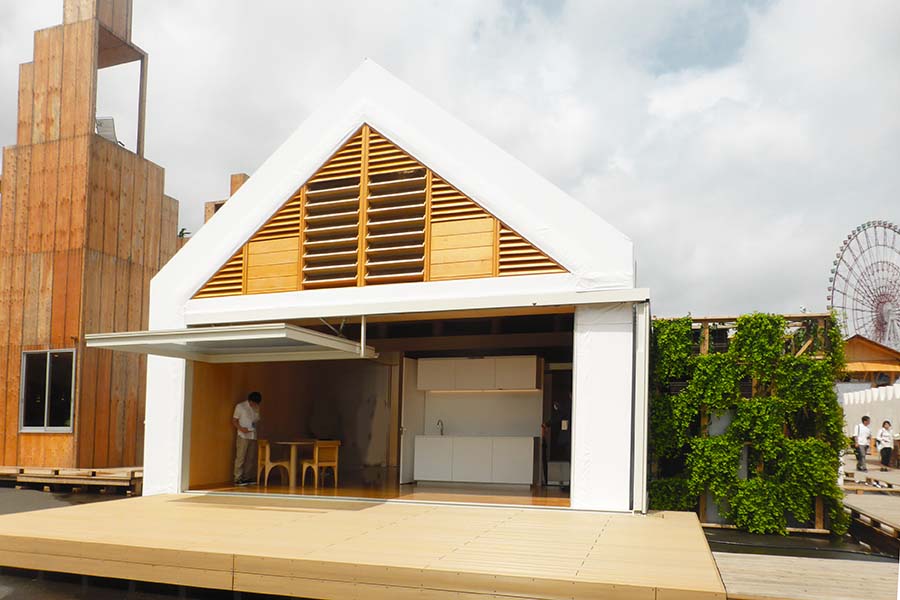 Left: Japanese company MUJI sells houses in Japan, and has launched the MUJI hut in 2017. Coming only in 9.1 m2 in floor area, the MUJI hut is all about the freedom to choose where you want to live.

Right: The Pritzker award laureate Japanese architect Shigeru Ban has been actively involved in disaster relief housing projects worldwide. His “tiny house” is easy to erect, and can be built by the dwellers if needed.

But this does not make sense. Massive, inflexible, irreversible and divisive concrete buildings are indeed self-standing. They are structurally autonomous. But that’s exactly where the problem starts. As contradictory as it may sound, when we are enveloped in a sturdy, strong, self-standing body, we start becoming dependent upon it. As structure gains autonomy, the people inside lose it.

So it’s natural that people sought to re-gain independence as dwellers and that led to the small house movement. It was the only solution that was controllable, manageable and editable, that was in proportion with human body size and the amount of power that they had as individuals. “Small (or tiny)” didn’t mean lack of space; it simply meant at a human-scale.

What kind of structural qualities can we leverage to achieve autonomous architecture that is naturally small? Kuma highlighted particular concepts in his book: 1) Stack, 2) Lean-to, 3) Weave and 4) Inflate. You could stack human-sized construction materials such as traditional-sized bricks using your own hands. You could also “weave” larger surfaces by using easy to handle materials like 2x4s or metal pipes. If the dwelling is only for occasional use, you can take advantage of light, flexible and inflatable synthetic fabrics to let the soft structure emerge only when needed. And, the most rudimentary of all, you could simply let the structure lean on other things that are sturdy enough to support it. The earliest form of architecture used the “lean-to” method: lean branches on a tree, or use cliffs or caves as load-bearing part of the structure.

Then the next step was to create a structure that relied on materials that leaned on each other. 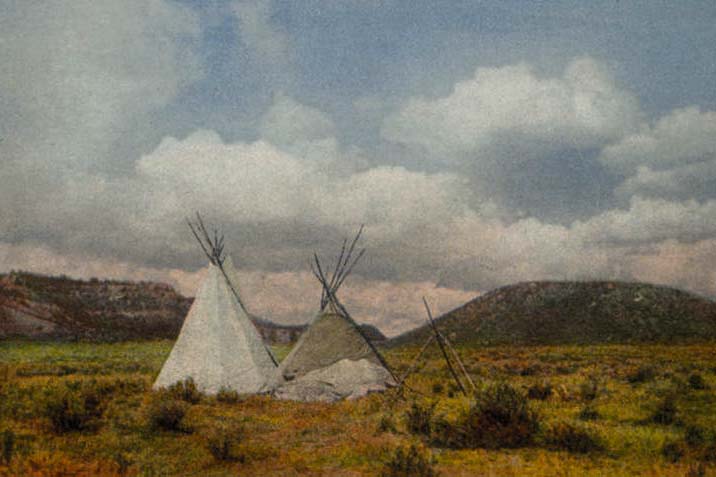 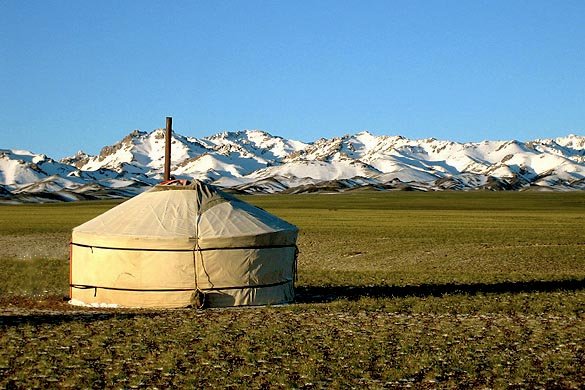 Left: Native American teepee. Multiple poles are tied together at the small ends, and are raised upright with a twist.

Right: The Mongolian ger. The frame consists of one or more expanding lattice wall-sections, and concial roofs are jointed on top of them.


Thus tents were born – the Native American teepee, the the Mongolian ger, or Kazakhstan yurt, to name a few. The basic idea is to build a conic shape using wooden poles, which support each other in order to to stay upright. This structure was especially helpful for nomadic people who lived on the great plains in Eurasia or in the Americas. Tents were easy to assemble, yet provided a sturdy shelter that helped dwellers survive harsh climates and were transportable so communities could move easily in pursuit for food/water for themselves and their animals.

As the world modernized, people shifted away from tents AND the nomadic life style to a much sturdier, boxier and more comfortable home fixed on a piece of property. It was an evolution of architecture from leaning to self-standing, an evolution from a life with only what nature bestowed to an economic independence. But at the same time, it was a regression in terms of mobility, flexibility, and our own resilience to survive by appreciating what nature provides for us. While we are heavily invested in keeping today’s society of economic affluence, we may be missing the freedom to go wherever we want, interact with nature and stay self-dependent – we are losing autonomy. Otherwise, why do we still maintain an affinity for triangular-shaped architecture, in the era of sleekly boxy high-rise buildings? The warm feeling, we feel when we see triangular shapes may not be mere nostalgia, but something more fundamental related to our existence.

It is interesting to see that the tiny house emerged after a feverish pursuit for modern, big architecture. It’s even more interesting that it coincided with the revival of the nomadic lifestyle. After centuries of relentless struggle to acquire a piece of land, own his/her own house and settle down, some people are now seeking the mobile life style again – albeit the meaning of “nomad” has changed a lot from its original, thanks to the evolution of technology. Especially with the worldwide deployment of the Internet, it’s now possible to perform work and socialize no matter where you are. So-called “digital nomads” there are an increasing number of people who are choosing a life style that is not bound to one address. Feeling that the whole world is their home and/or office, they move in search of excitement and/or jobs. There are also “urban nomads.” Contrary to digital nomads, urban ones still maintain an urban address, but they hop from place to place, to live/work happily by exposing themselves to different environments even within one day. The gist: you don’t have to live in order to maintain your house (or to pay mortgage). Instead, you can be in a place that makes you happy, and find a home/office that fit your needs.

The synchronicity of the tiny house and nomad movement may be telling us that it’s time to go back to the basics. It’s time to remember the spirit of the conic/triangular shape. Fortunately, with state-of-the-art technology, we can transform traditional tents into something more flexible and comfortable enough to fit in modern life style.

Three years after Kengo Kuma wrote Small Architecture he designed the “Grand Third Living” by collaborating with Toyota for the exhibition “House Vision” held in Tokyo during the summer of 2016. Realizing his idea for “small architecture,” for an autonomous life style that is directly connected to nature, he designed tents for nomadic living. You can put them in the trunk of an EV (which can generate enough power for dwellers), and go anywhere you want. The tents look a lot like a teepee, but the poles don’t need to be tied together at the top. With a wider cap, they looked like flowers in bloom at the venue. 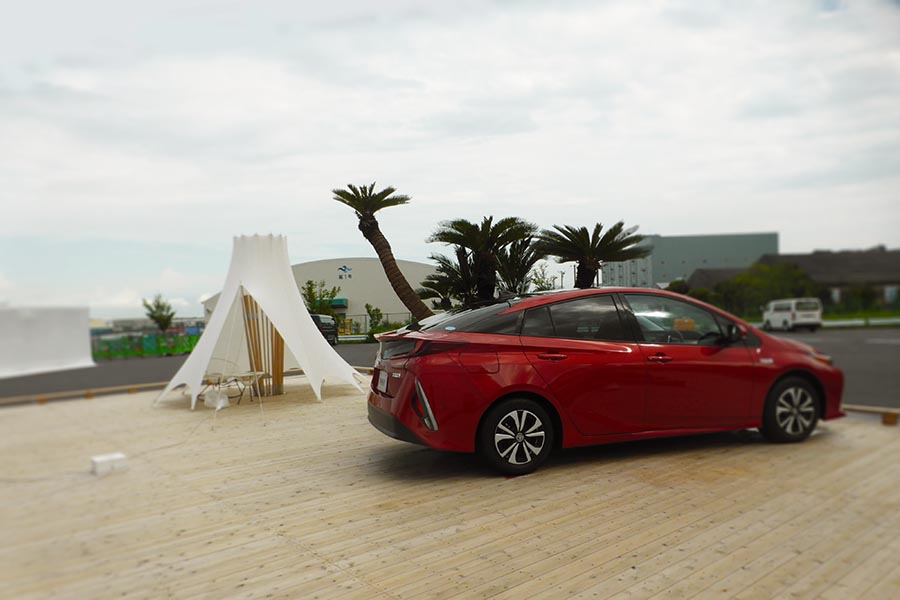 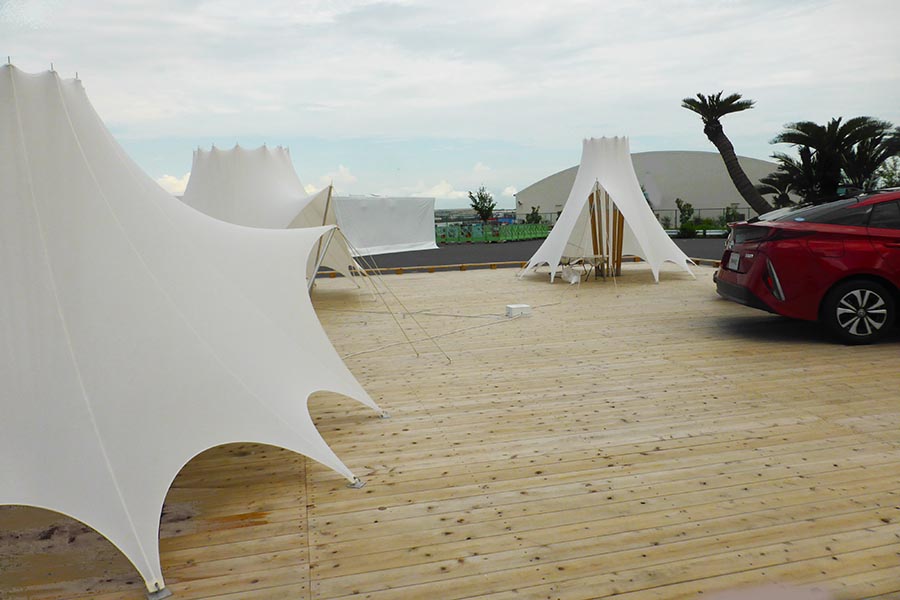 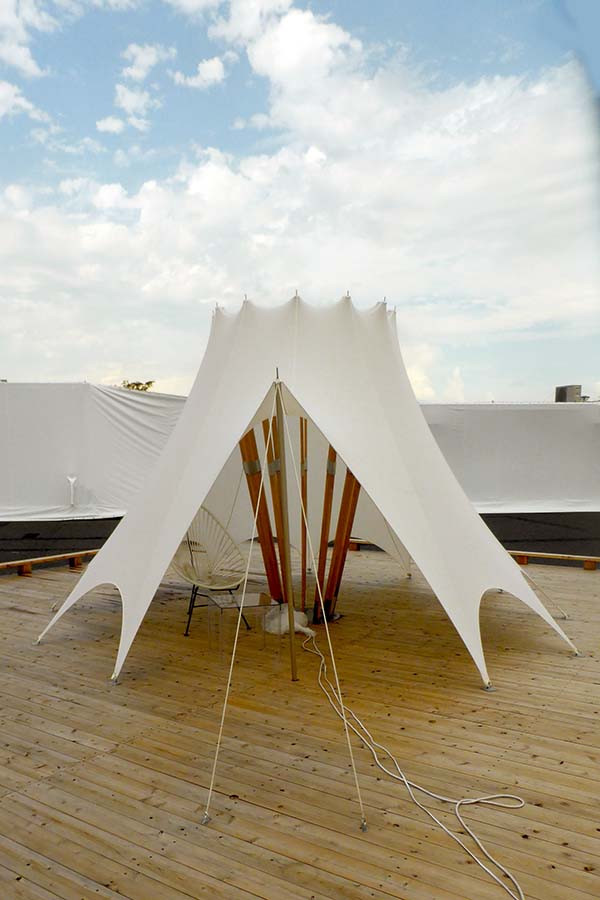 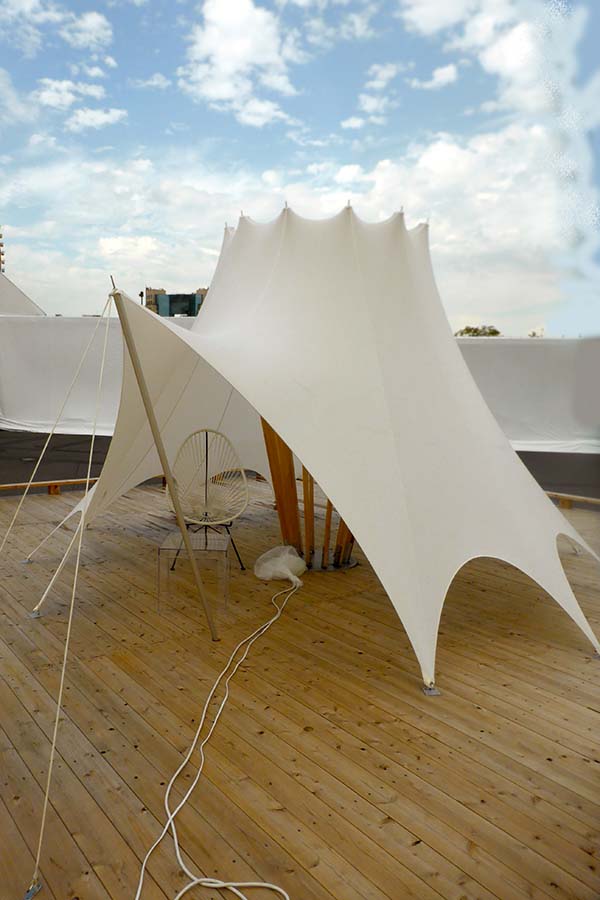 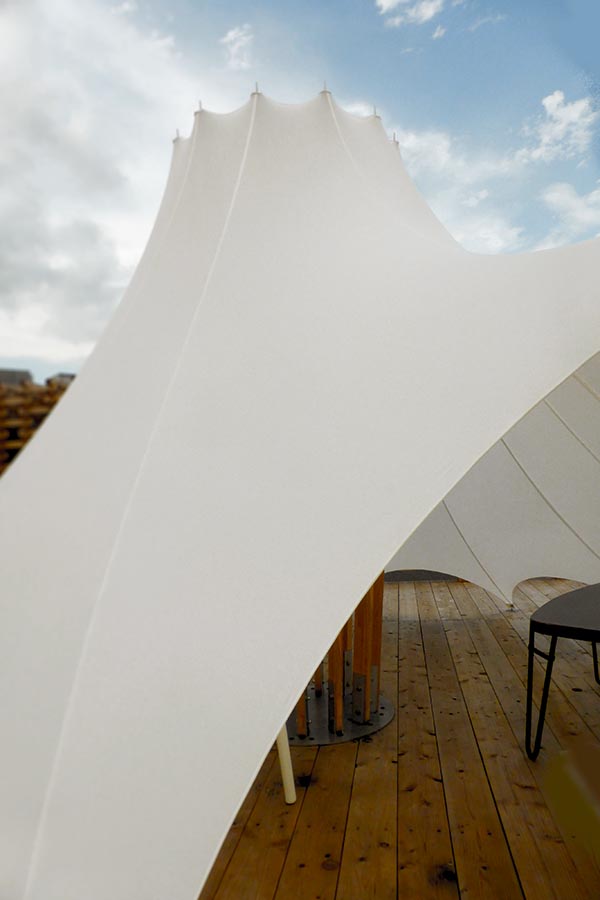 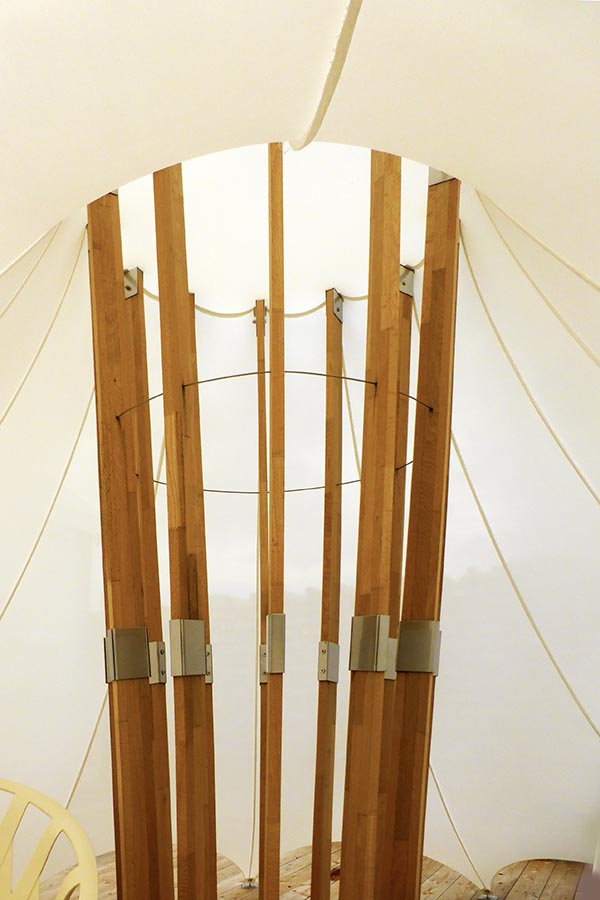 
Also in exhibit at “House Vision 2016” was “Hiragana No Spiral House” deigned by Yuko Nagayama. The shape/size looks very much like Mongolian ger, but the interior leverages IoT technology: the entire walls can be used as a seamless round screen that displays everything that the IoT system connects with. 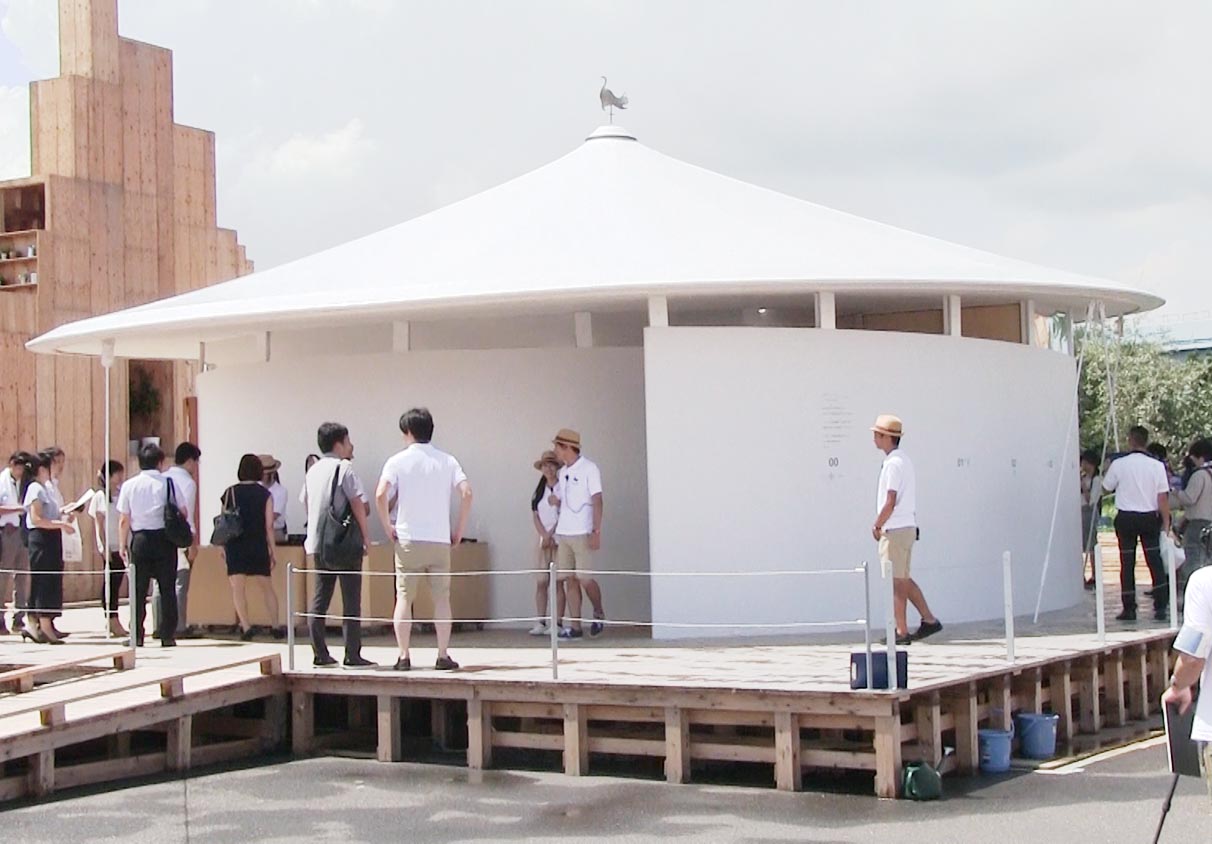 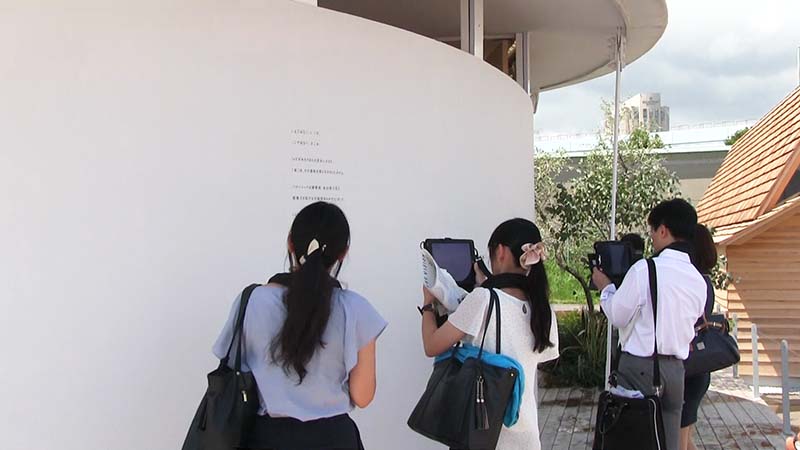 
Probably tents are still used as tents for the most part, but they are evolving. There are many “glamping” sites today that use high-tech version of tents, and may of them are yurts with surprisingly large floor area. Exposed structure (beams and lattice) provides folksy atmosphere. 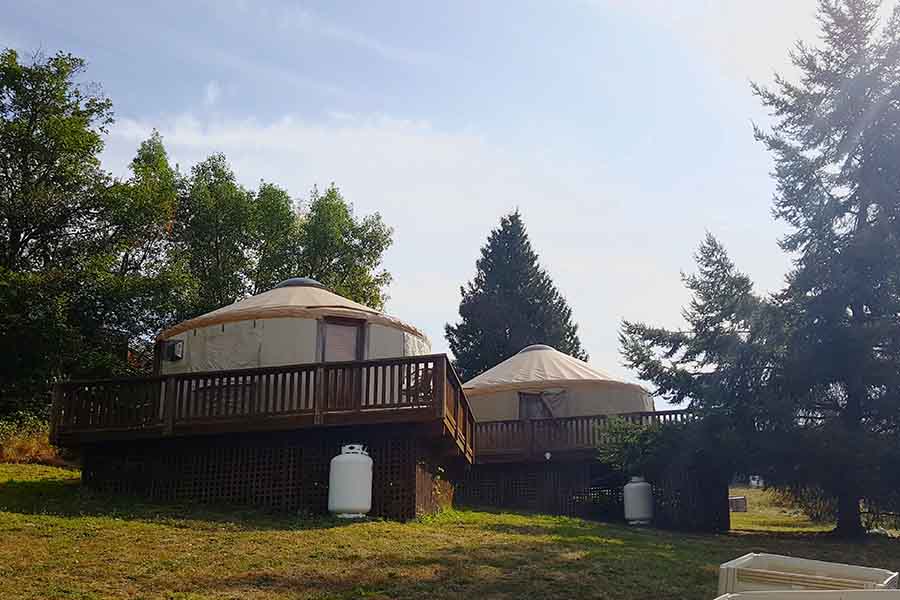 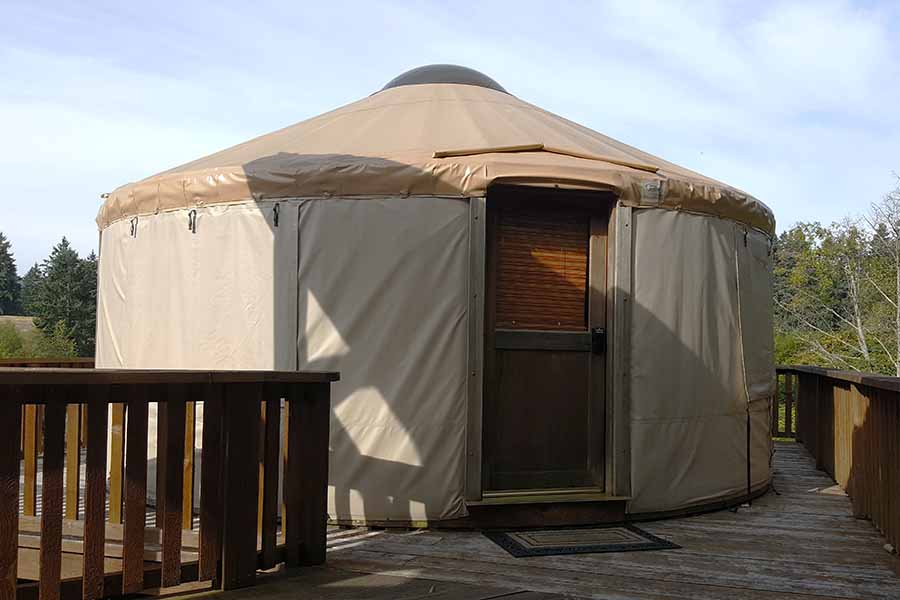 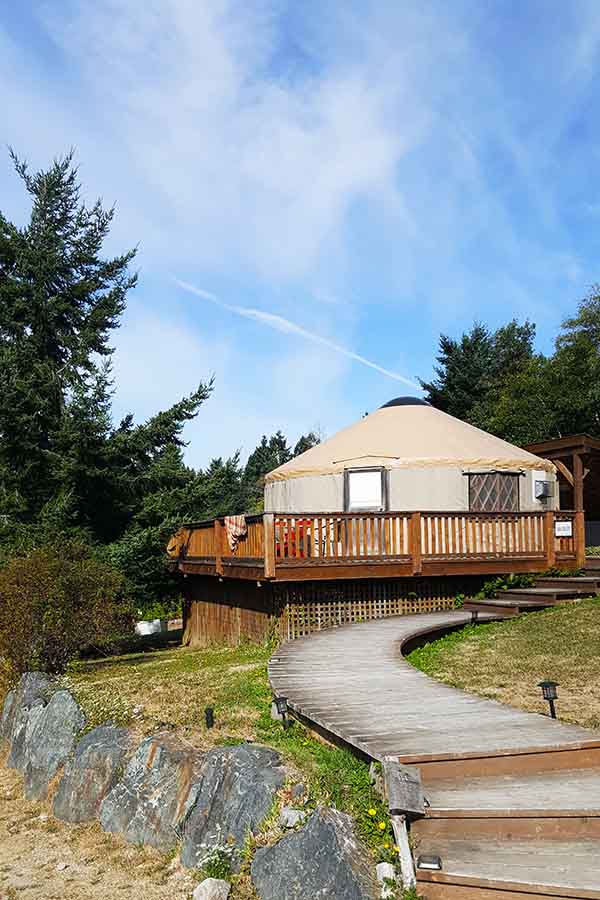 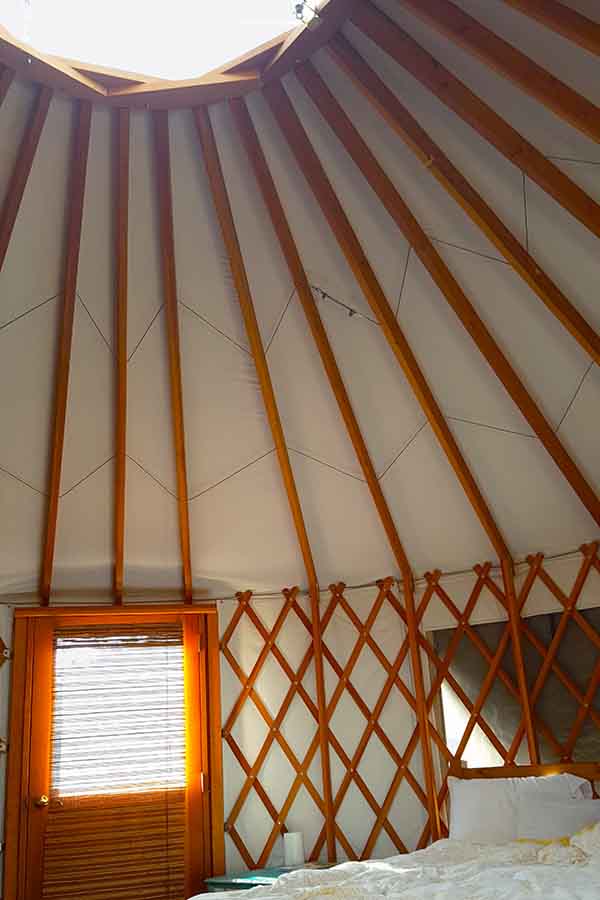 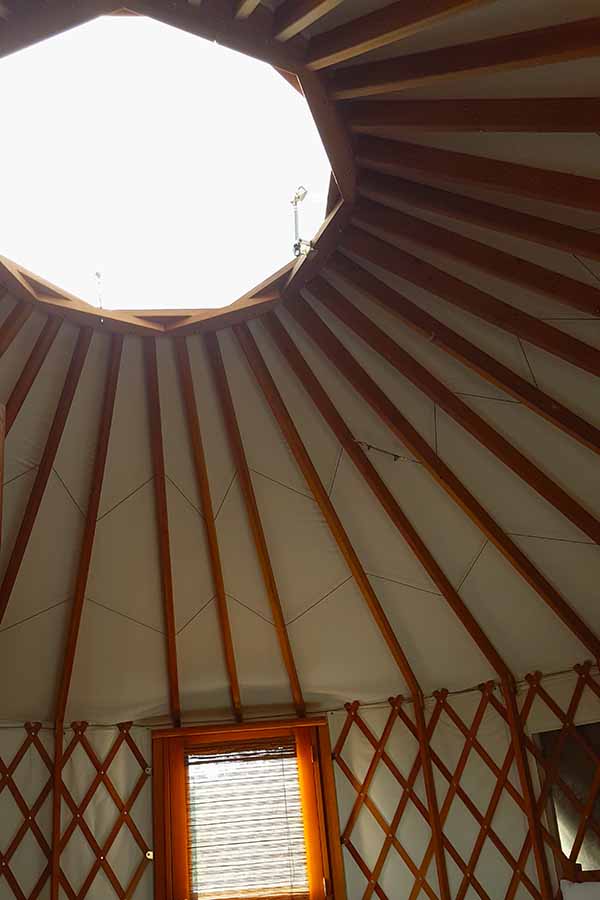 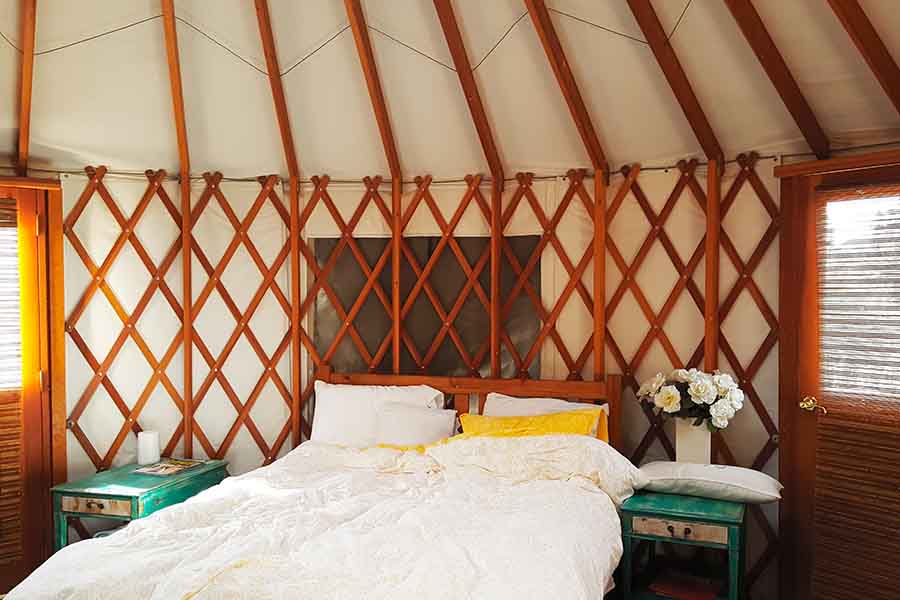 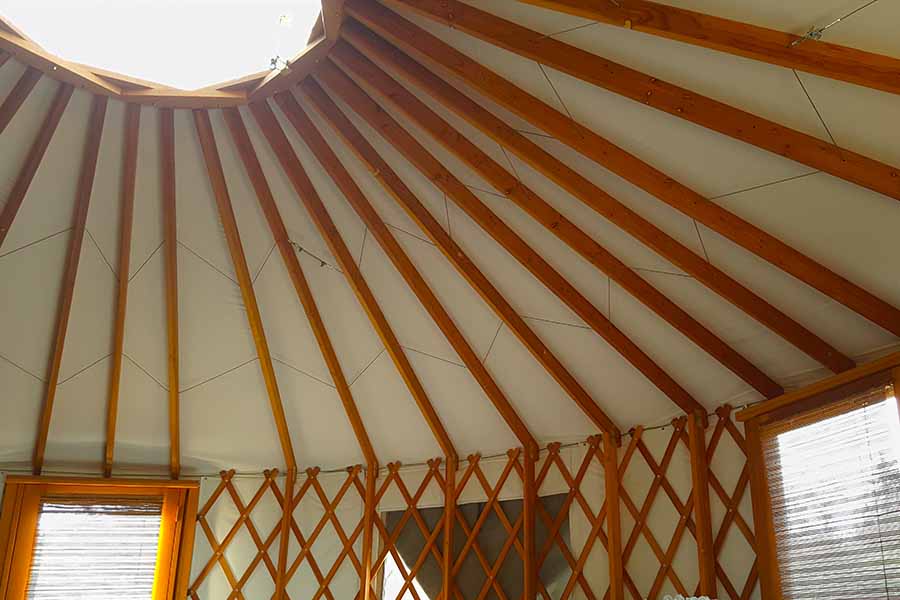