Back to Projects in Progress main page

As the name of the exhibition suggests, Shigeru Ban’s “Projects in Progress” focused on ongoing projects, rather than completed ones. It was actually pretty exciting to learn about the development of each particular project.  To explain his work on La Seine Musicale, Ban displayed a video, along with many other materials that documented the progress of the project, from the beginning (an open competition), through construction to completion in Spring 2017. The entire process took six years.

The musical complex sits on the “Île Seguin” (Sequin Island) on the Seine River in the commune of Boulogne-Billancourt, an affluent western suburb of Paris. About half the size of the more famous Île de la Cité, Île Seguin was once home to the French auto giant Renault’s largest factory in France. But the factory closed in 1992, and the site became abandoned.

Boulogne-Billancourt originally flourished as an industrial/commercial center, and the Renault factory was a symbol of robust French industry in the middle of the 20th century. Naturally, post-Renault, there was heated debate as to how to revitalize this landmark island. 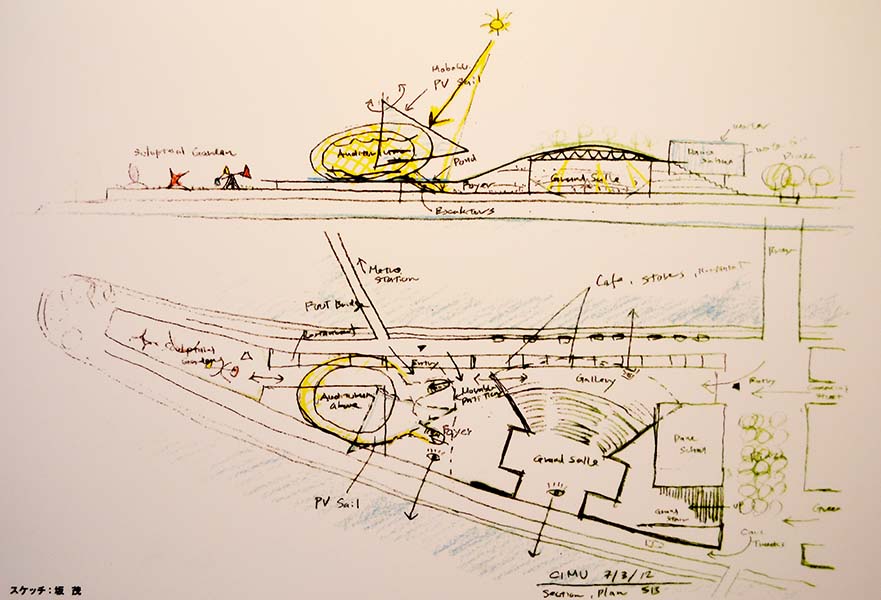 Draft design of La Seine Musicale by Shigeru Ban. The entire triangular-shaped island was developed for industrial use during the early 20th century, which is connected to river banks via both pedestrian and vehicle bridges. An egg-shaped auditorium sits towards the fore, and multiple musical halls and galleries are located in the middle of the island.

Since one of the project requirements was to maintain the industrial heritage of the Sequin, the entire island is enveloped by concrete walls, and the facilities rise high. You cannot really see natural surfaces. Given the whiteness of the concrete, the entire structure looks like a monumental ship anchored in the Seine.

The aerial video captured the project’s ship-like character on the Sequin Island.

What kind of ship would the local population want, to let the Sequin sail into the middle of the 21st century? After experiencing the rise and decline of industrial endeavors, it feels like a sensible decision to start fostering a cultural heritage with sustainable features so that the island, the river and the surrounding environment/community could live in harmony in coming decades.

Back in old days, a ship would have used sails, using the wind for power. “But this one has a sail made of solar panels,” says Ban.

This sail is capable of rotating, following the sun in order to maximize its generation capacity. It can also provide cooling shade to the auditorium which will help reduce the need for air conditioning. 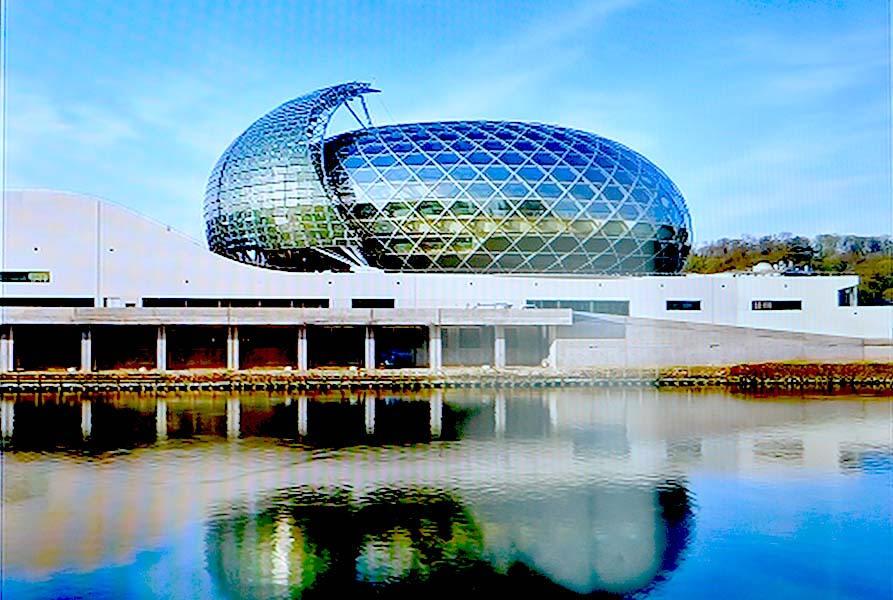 One of Ban’s design principles is to let a single material/design have multiple meanings/functions. In his architecture, structure is often exposed rather than hidden behind the walls, and used to create handsome patterns. Simple geometric shapes are connected together to make designs that are intricate and multi-functional.

The solar panels used for La Seine Musicale do generate electricity, provide shade, and equally importantly, add elegance.  It’s eye-opening to realize that functional units don’t have to be used only for functionality, looking cut-and-dry and boring. They can also be aesthetically beautiful. 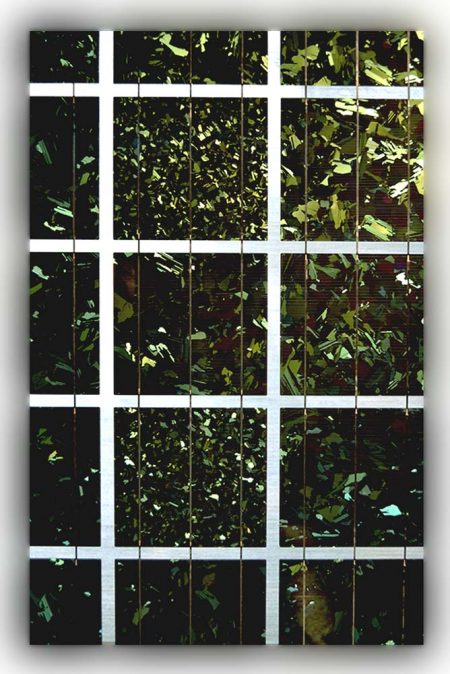 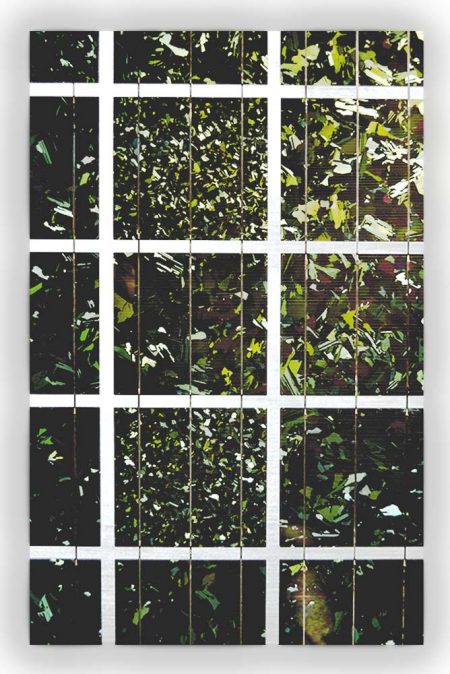 La Seine Musical is also unique in that it retains some kind of cuteness despite its industrial heritage.

Ban explains: “I wanted to leave some hand made-like, organic atmosphere inside, which would create an interesting contrast against how things look outside.”  La Seine Musicale uses a lot of concrete (hard material) and linear, vertical pattern for envelopes, giving a forceful impression.   The egg-shaped auditorium is a surprise addition that adds cuteness to an otherwise steady-looking industrial monument.

The egg is covered by hexagonal structure, and it’s worth taking a close look inside.

The egg is actually finished with mosaic tiles. They change colors depending on where the light is coming from and its intensity. “I always try to design architecture that changes its expression as weather/time changes,” declares Ban. 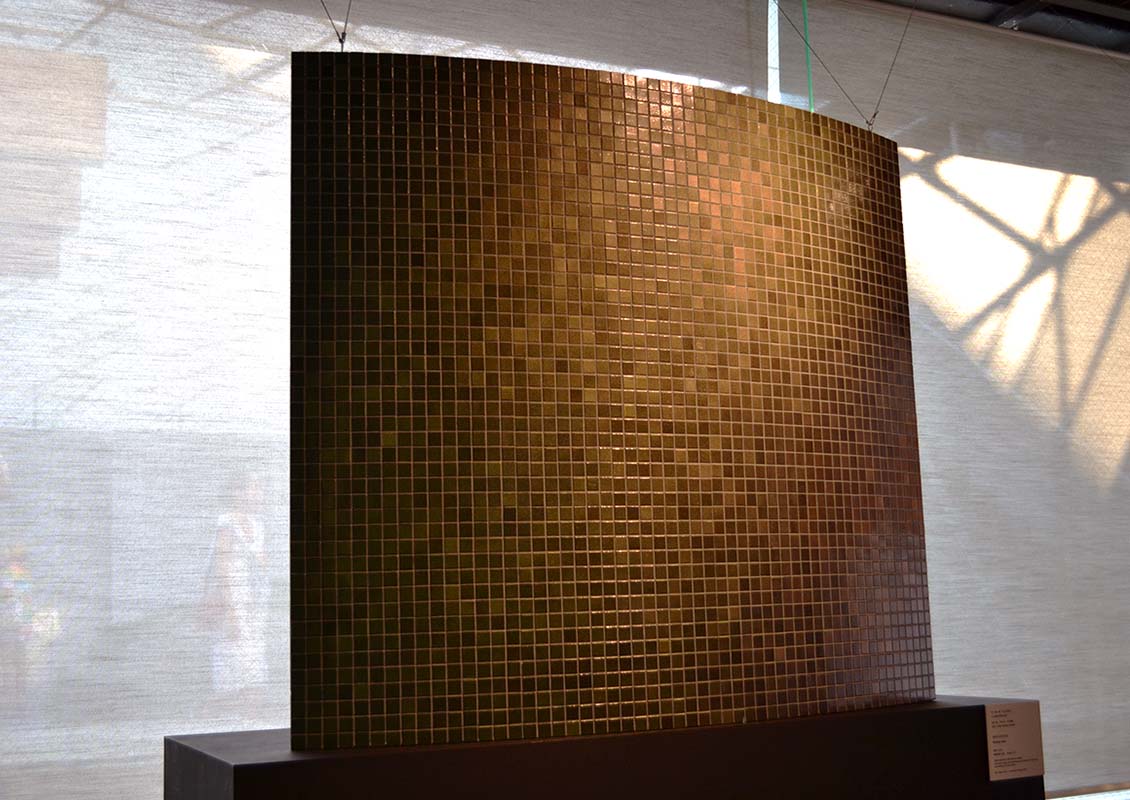 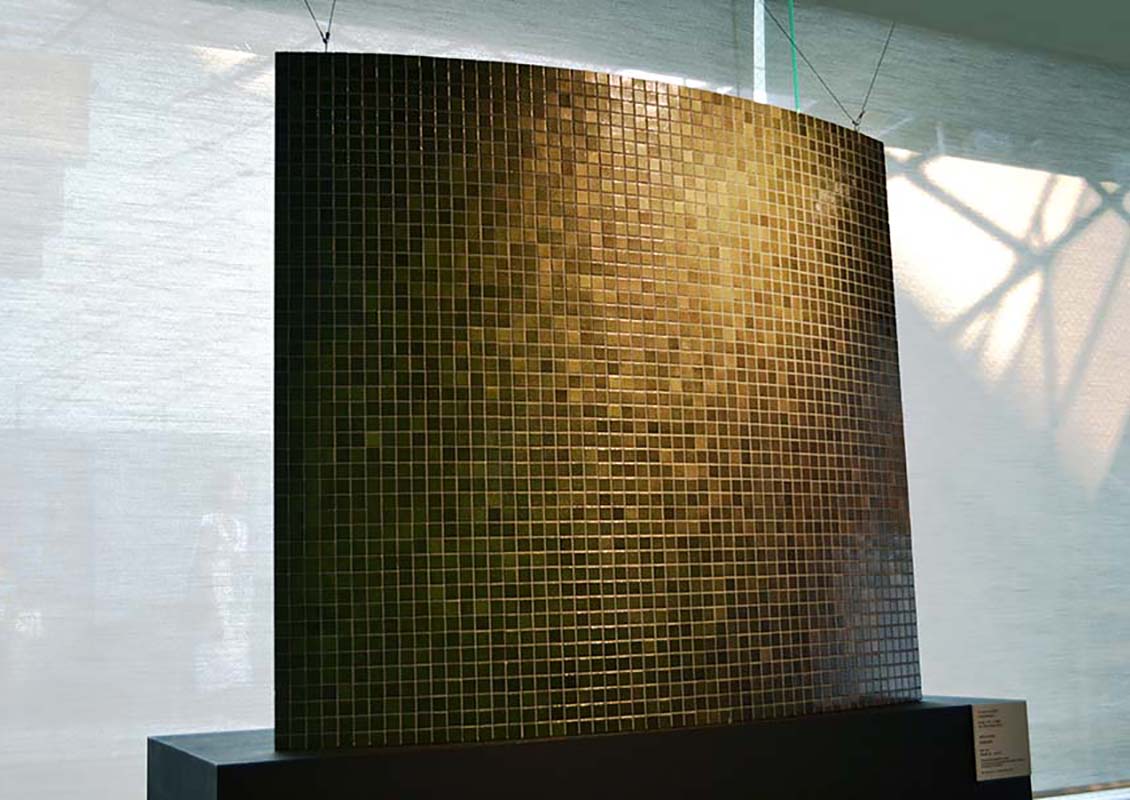 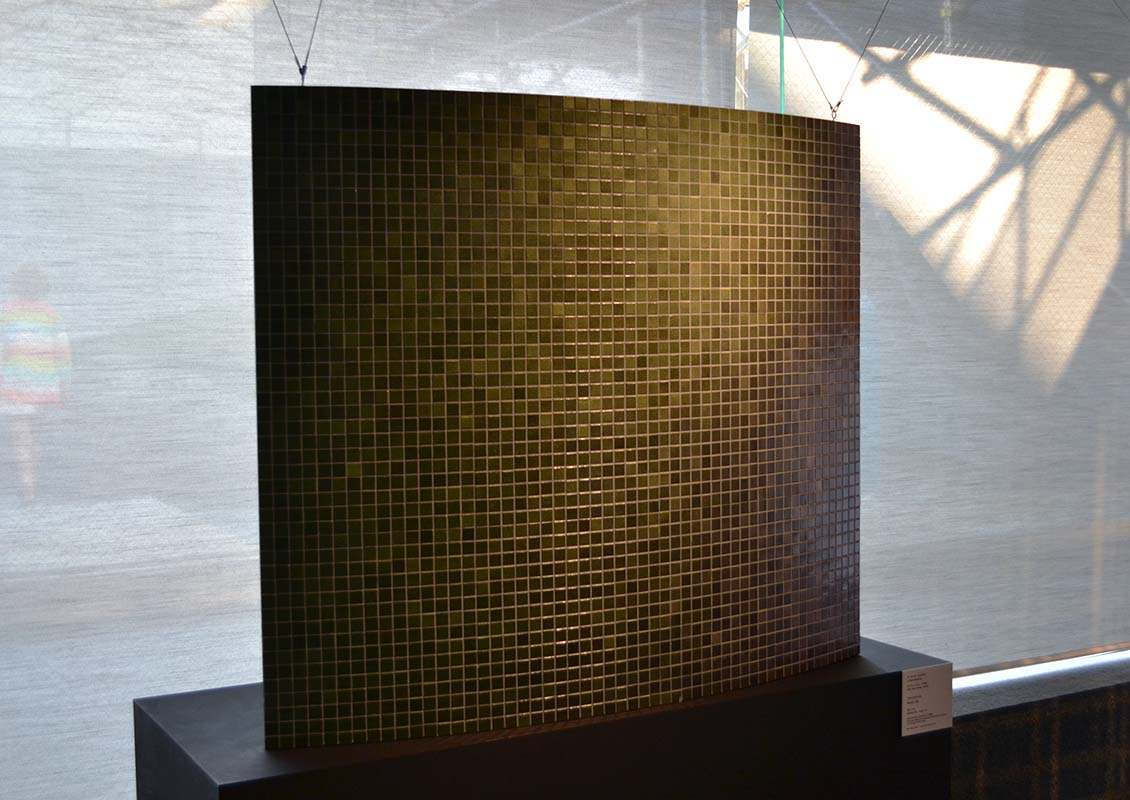 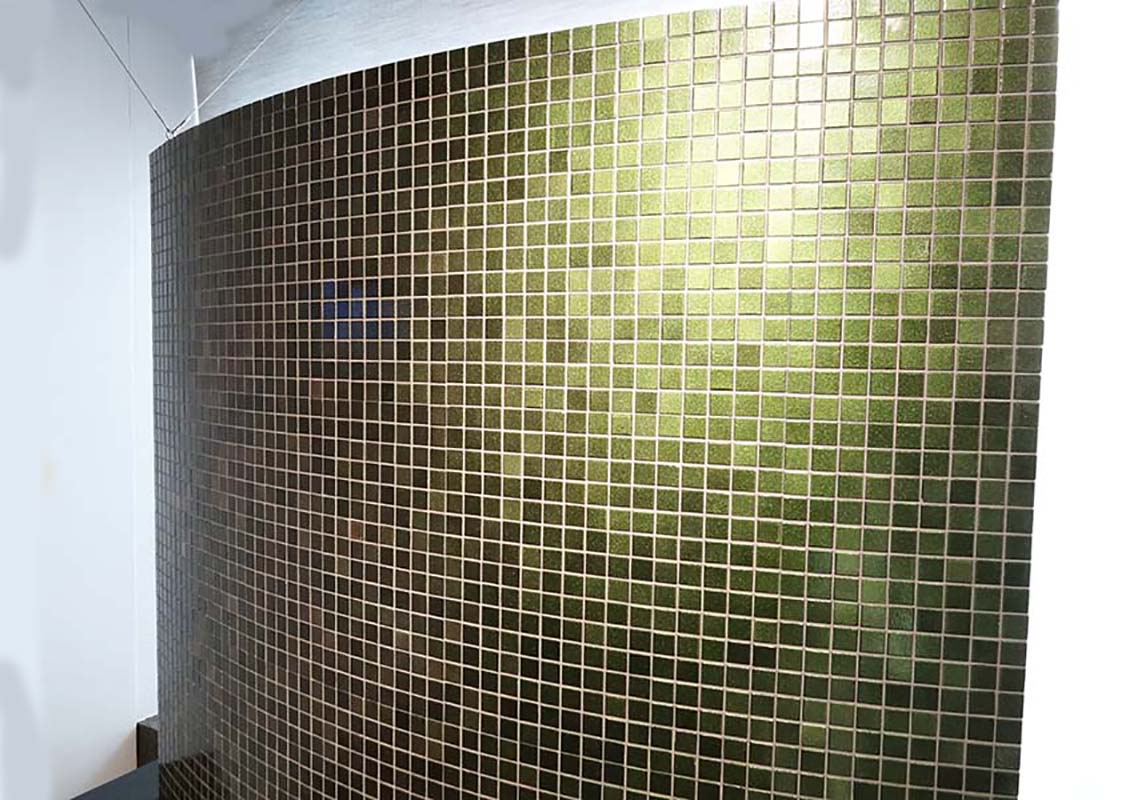 Depending on the strength and angle of the lighting, the green tiles display shades of blue, red, yellow and gold. They must reveal different faces under natural light.

Inside the building, you will be enveloped by soothing wavy surfaces made of soft, organic materials such as wood and paper tubes.  These curvy walls help improve acoustic effects, while augmenting the visitor’s excitement visually.

The ceilings of the main auditorium are finished with paper tubes of different diameters.  They are cut into short lengths and sorted into hexagonal frames.  Then, they are connected together to create the effect of unpredictable undulations.

The ceilings and walls of the auditorium are undulated and curved. The ceilings are made of cut paper tubes – Ban’s signature material – connected together.

Paper tubes are Ban’s signature material.  He uses them to build temporary houses/buildings for disaster victims who have lost their homes, but he also uses them to create large, beautiful architecture such as an expo pavilion. “They are strong enough to function as structure,” he reminds us.  Since he has been using them for so long and in so many ways, he’s become a master of paper tube architecture. “I’ve always wanted to come up with my own structural system,” says Ban.  So he is an architect who developed his own OS (operating system), based on paper tubes and that OS is amazingly versatile and universal.

The walls of the auditorium are covered by wood, which also come in different designs and curves. The samples on display almost looked like pies or cookies. They are not just soft-looking and make you feel relaxed. There is something more elemental that directly appeals to your five senses. 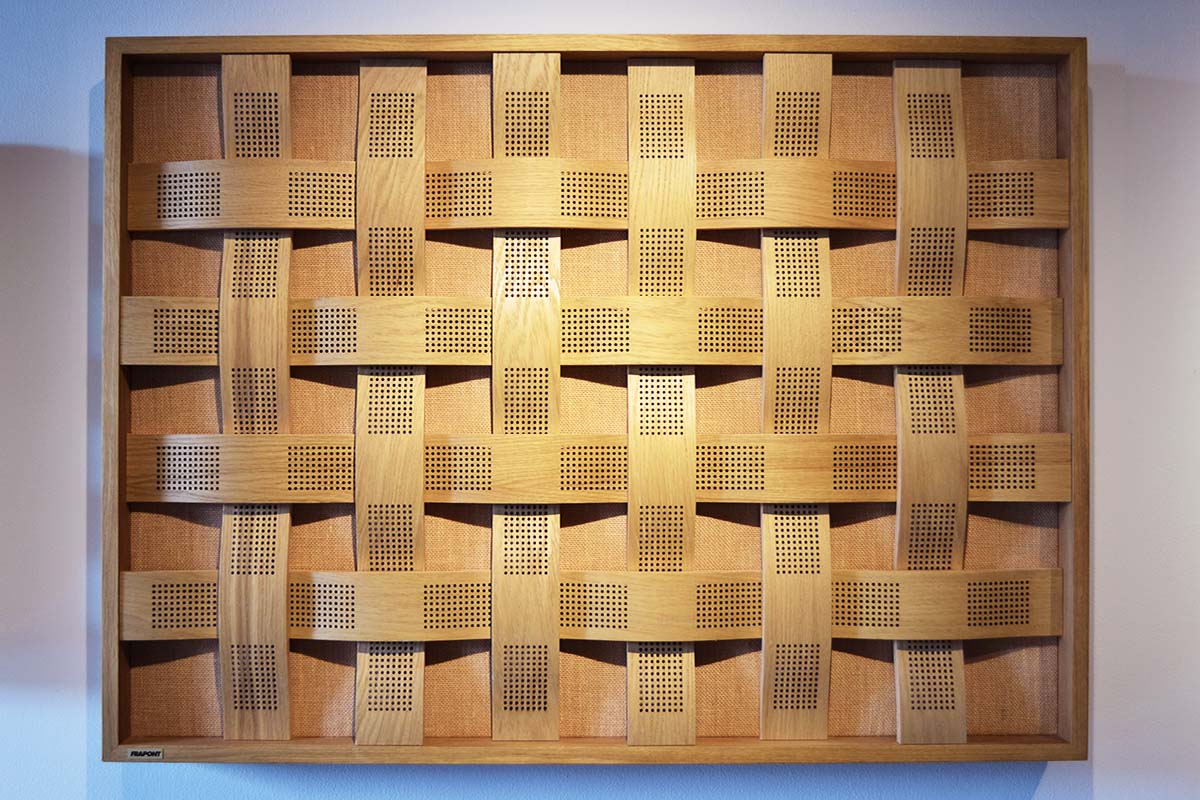 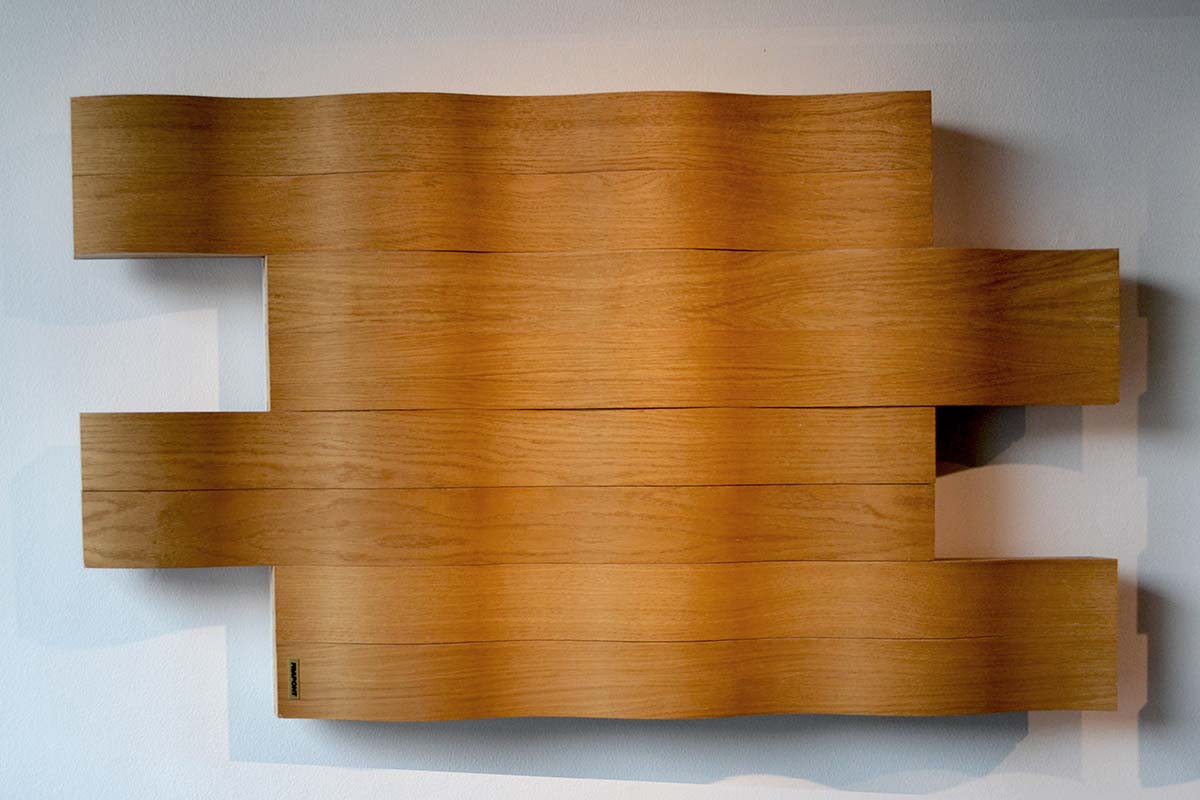 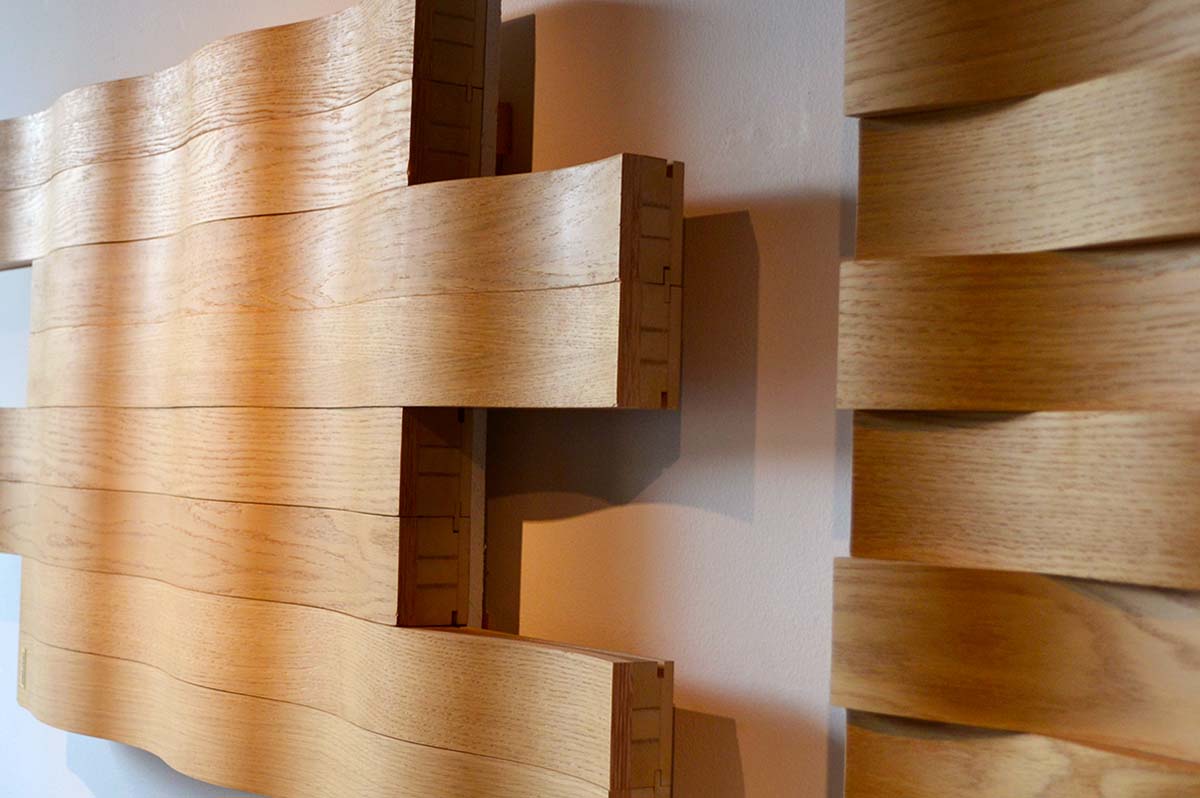 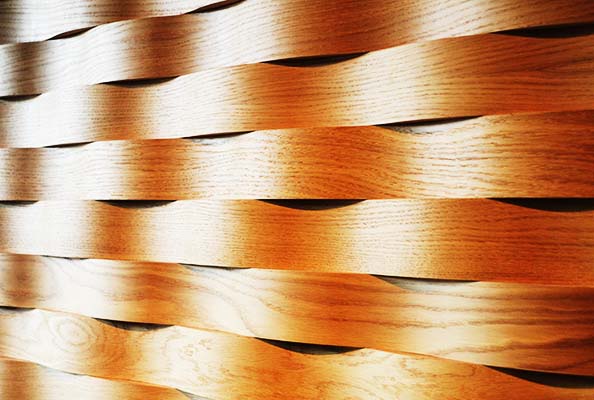 Last but not least, the rear “deck” of the ship is a scenic park. Therefore, the venue is semi-open to public.  People can wander in, even without tickets, and probably enjoy some of the music – for this purpose Ban has installed a big video screen outside.

La Seine Musicale set sail on its musical journey on April 21, 2017 with a concert by Bob Dylan. Paris has been known for its cultural diversity and creativity to lead the world of art, blending a whole variety of talents. May that trend continue and flourish at the Île Seguin. 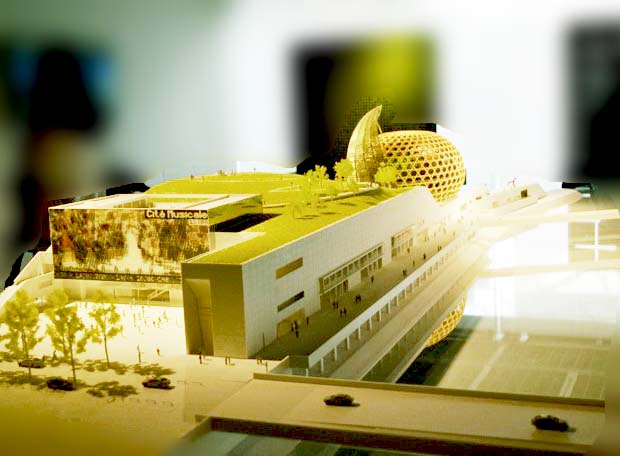 Back to Projects in Progress main page
More on Japanese architecture