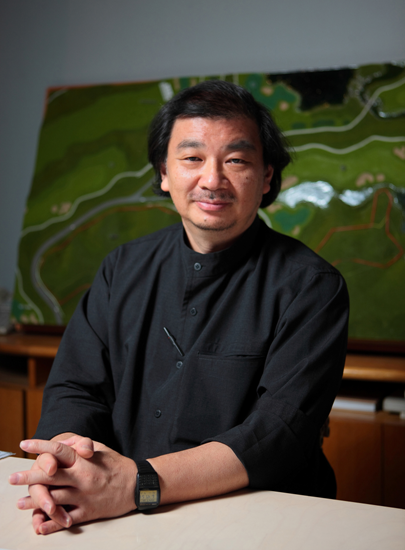 Shigeru Ban, the 2014 laureate of the Pritzker Architecture Prize, has been working on natural disaster relief projects since 1994. As much as it is humanitarian efforts for him, it has also been helping him  define his philosophy what architecture should be and can be. It is inspiring to learn just how many places he has been around the world to help people who lost home – the most important place for anyone – and how he is leveraging his experiences to remind us how ferocious nature can be and what kind of resilience people and architecture need in order to keep our society and communities going overcoming tragic situations. His answers may not be what you would expect living in highly modern world enabled by advanced technology.

It all started from pictures of refugees freezing in poorly maintained camps during the Rwandan civil war in 1994. Although he had no connection to Rwanda, he immediately decided that he wanted to help them using his expertise as an architect. So he flew to the headquarters of the UN Refugee Agency, in Switzerland. It didn’t matter that he didn’t know a single person at the agency. He was just determined to make something happen.

And he did. After some back and forth, he finally found the team that actually provided shelters to refugees. But as it turned out, the default protocol for the UN Refugee Agency was to provide refugees with large plastic sheets, and the refugees were supposed to cut local trees to build a structure and set up a make-shift tent on their own.  However, due to the massive scale of displacement, the forests around the camp were entirely cut down in no time, causing serious environmental degradation.

So the UN switched to aluminum structures, but another unexpected happened: the refugees ended up selling them to make money. And that’s when Ban proposed something no one expected: kraft paper tubes as alternative shelter structure. Although it doesn’t sound right, Ban knew that it would work as he had been using them for years to build large/beautiful buildings. “Paper tubes are produced everywhere in the world with low costs. They are accessible by anyone, and are strong enough to support large structures.”

As paper tubes worked in Rwanda, they became one of Ban’s signature materials in disaster relief projects. He also started going to disaster-stricken areas immediately even before he could arrange anything with victims or local authorities. He acts voluntarily and swiftly, as that’s what’s needed in an emergency. When the Hanshin-Awaji Earthquake occurred (M7, death toll 6,434) shattered large urban areas of Western Japan including Kobe in 1995, he was there right away. He wasted no time to use paper tubes to built shelters for the victims. (The foundation was plastic beer cases in which bagged dirt was placed.)

The Hanshin-Awaji Earthquake was especially a tough one for Ban because so many people died suppressed by collapsed buildings, which architects helped build. Modern buildings are large, heavy and rigid. It was heart wrenching reminder for him to see that these advantages could kill many people in the event of disasters.

So he was determined to do more. In one of the most affected areas, he found a church that was completely burned down. As it was in the low income neighborhood, displaced people – many were immigrants – were starting to gather at the rubbles to help each other. Ban approached Father Kanda and proposed he could built a temporary church using paper tubes (with no costs to the church). It took multiple visits to finally persuade skeptical Father Kanda, but Ban eventually built a beautiful church with his students who volunteered to help the construction. The Takatori Catholic Church became a disaster relief center where local people of various nationalities who lost almost everything could rely on. The paper church ended up staying there for 10 years as they loved it. When it was finally replaced by a permanent building (which was also designed by Ban), the structure was dismantled and shipped to Taiwan to help yet another earthquake-hit community, and became a permanent church/community center there. 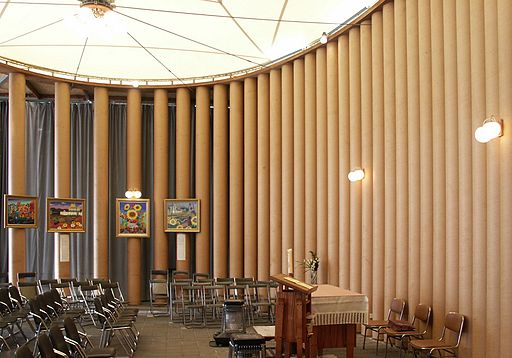 His enterprise to help earthquake victims continued.  In 1999, he went to Turkey when it was hit by M7.6 earthquake that took the lives of 17,000 people. There again, Ban worked with local paper tube providers and built shelters. During his stay, one local architect challenged him saying, “You are from a country where people live in wooden houses. Here in Turkey, people live in houses made of brick or concrete. I’m afraid people won’t feel comfortable in your shelter if it’s made of paper.”  As it turns out, the victims felt more comfortable in Ban’s shelter after they witnessed heavy bricks and concrete collapse and suppress humans’ bodies. They were devastated by the “bigger, harder and sturdier” side of modern architecture. They felt much safer surrounded by paper, an organic material, much lighter and softer, and wasn’t alienating.

After Turkey, he went to disaster-struck regions in India, Sri Lanka, China, Italy and Haiti. In 2008, he brought 30 students from Japan to build a school Sichuain, China, where many school buildings collapsed because of incomplete construction. They used paper tubes and completed it in five weeks, with the help of local students. Just like what happened to the Kobe church, the school liked it so much that people still use it, many years after the quake.

His efforts to help disaster victims as an architect was, in a sense, an effort to find an alternative to the “bigger, harder, sturdier” modern buildings and structure. Ever since he witnessed in Kobe and elsewhere that so many of them collapsed and killed/injured people, Ban has been re-questioning our blind belief that bigger, harder and studier, the better for buildings and social infrastructure. Although they work most of the time, once collapsed, not only do they become serious threats to our lives, we were also left with massive amounts of irreversible rubble, which a re not easy to handle or to remove or reuse, not to mention to embrace.

Ban recalls what Father Kanda of Takatori Church in Kobe said right after the quake: “I feel like this place finally became a true church when the building collapsed and disappeared.” It reminded him that what constituted a church was not an elaborately designed building, but the people who shared the belief, and were ready to work together and help each other.

As he worked on disaster relief projects and interacted with victims, local people and organizations like Father Kanda and Takatori Catholic Church for decades, he became convinced that the definition of “permanent architecture” had nothing to do with the sturdiness of the materials. If people love the building, it’s permanent to them even if it was made of paper. By the same token, sturdy, huge and fancy commercial buildings are still temporary if they are there just to make money, not for local people. “No matter how much concrete was used to make sturdy, durable structure, they wouldn’t qualify as a permanent existence if people in the community didn’t care about it,” Ban declared.

By the way, paper rolls are not weak or vulnerable as most people would think, says Ban. They are strong enough to constitute the structure for large buildings, and they are pretty fire resistant (and you can always apply protective coats to enhance resistance). They are light and easy to handle.  They can be sourced locally- actually, paper roll factories are everywhere in the world, and Ban worked with many of them for his disaster aid projects.  In addition to all those advantages, paper is recyclable. And last but not least,  they are an organic material that have soft, soothing texture that makes people feel relaxed and comfortable. He would joke: “When I made my first house using paper rolls, I used the largest ones for bathrooms in case people ran out of toilet paper! They could peel off the interior wall and they’d be all set.” His hilarious story reminds us how nature, architecture and humans can stay connected, smoothly and comfortably. 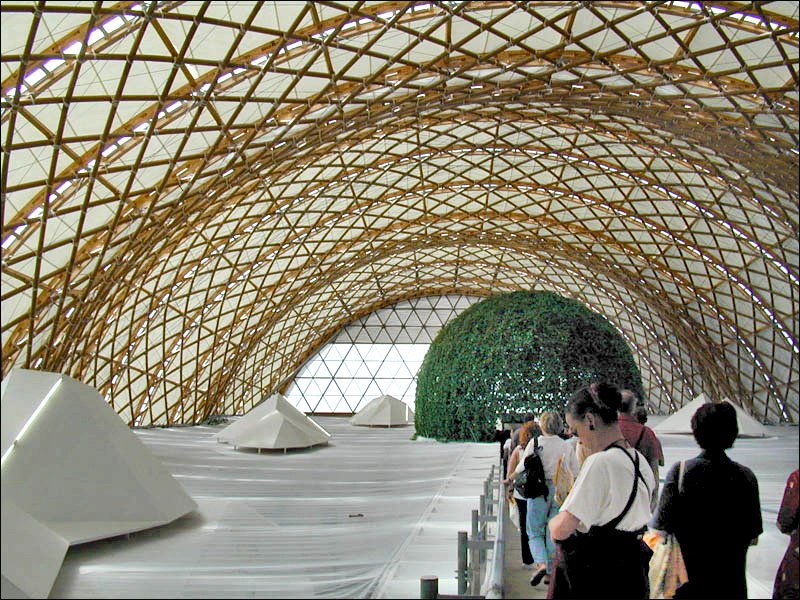 Japan Pavillion at Hanover Expo 2000. One of his iconic architecture using paper tubes.  “Many architects think the completion of the building is the goal. I believe the goal is when it’s dismantled. That’s why I use recyclable materials such as paper tubes,” says Ban. By Jean-Pierre Dalbéra from Paris, France [CC BY 2.0], via Wikimedia Commons

iFixit – rediscover the joy of making and repairing things