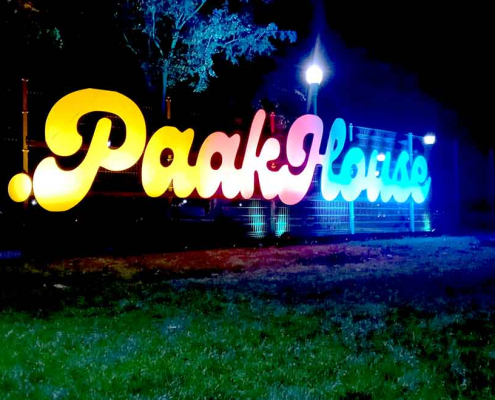 We traveled from NorCal to Oxnard to attend .Paak Hose 2021 on Dec 22, the event organized by Anderson .Paak’s non-profit organization, the Brandon Anderson Foundation. According to their mission statement,

The Brandon Anderson Foundation is a unique 501c3 non-profit organization that believes any person has the ability to tap into their greatest potential with the right exposure. We aim to support and create initiatives that uplift, engage and support the community through access to the arts, supplemental education and unique experiences to expand the imagination.

With the first initiative, .Paak House, the foundation seeks to create a “safe-haven” for the next generation, while cultivating alliances with like-minded non-profit organizations to generate a greater impact — TOGETHER. This safe-haven is generated through community outreach, sponsored events, summer programs, & after-school programs, all leading to establishing an actual .Paak House building, in an impacted community.

That’s a great mission. But as far as the event was concerned, it was a bit of disaster. I totally understand that this must have been huge undertakings, so I am not that critical, but couple of thoughts how they could improve next year (assuming that they will return next year). 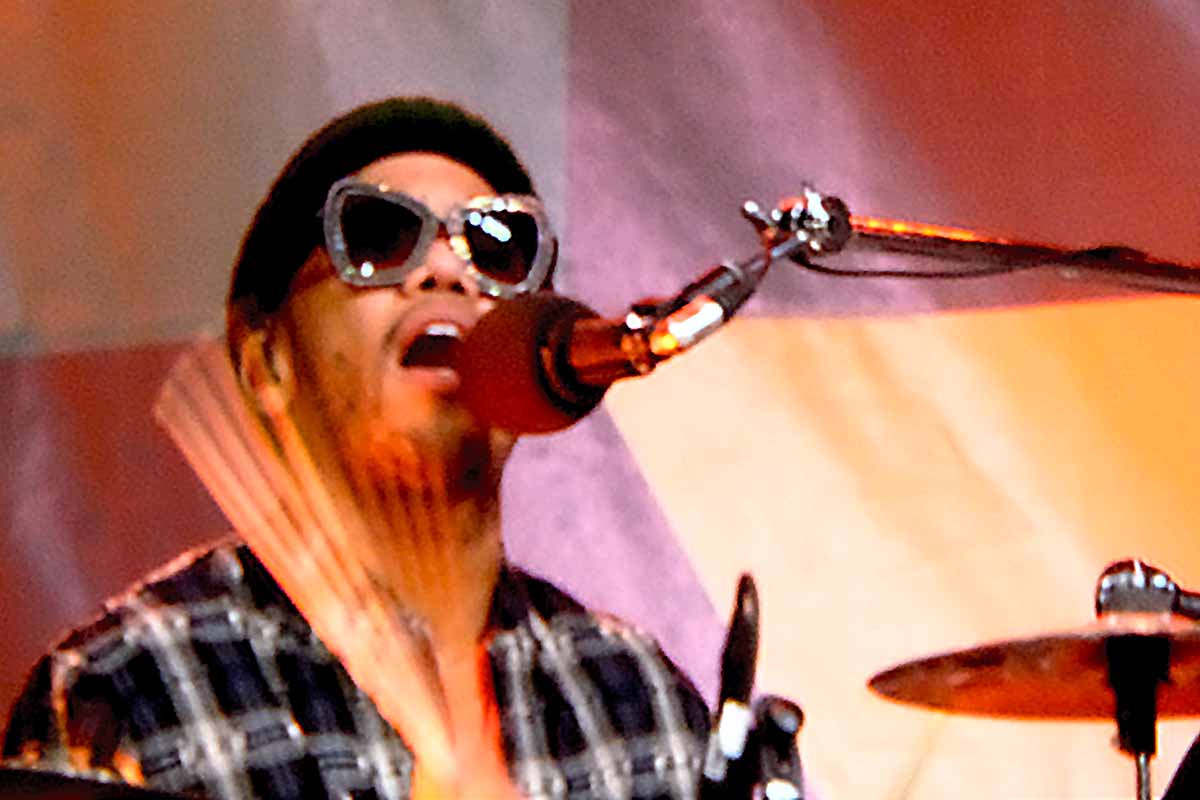 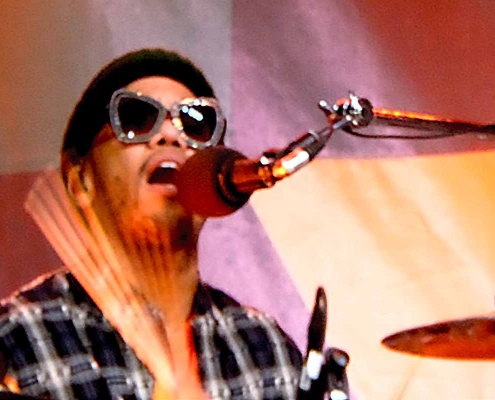 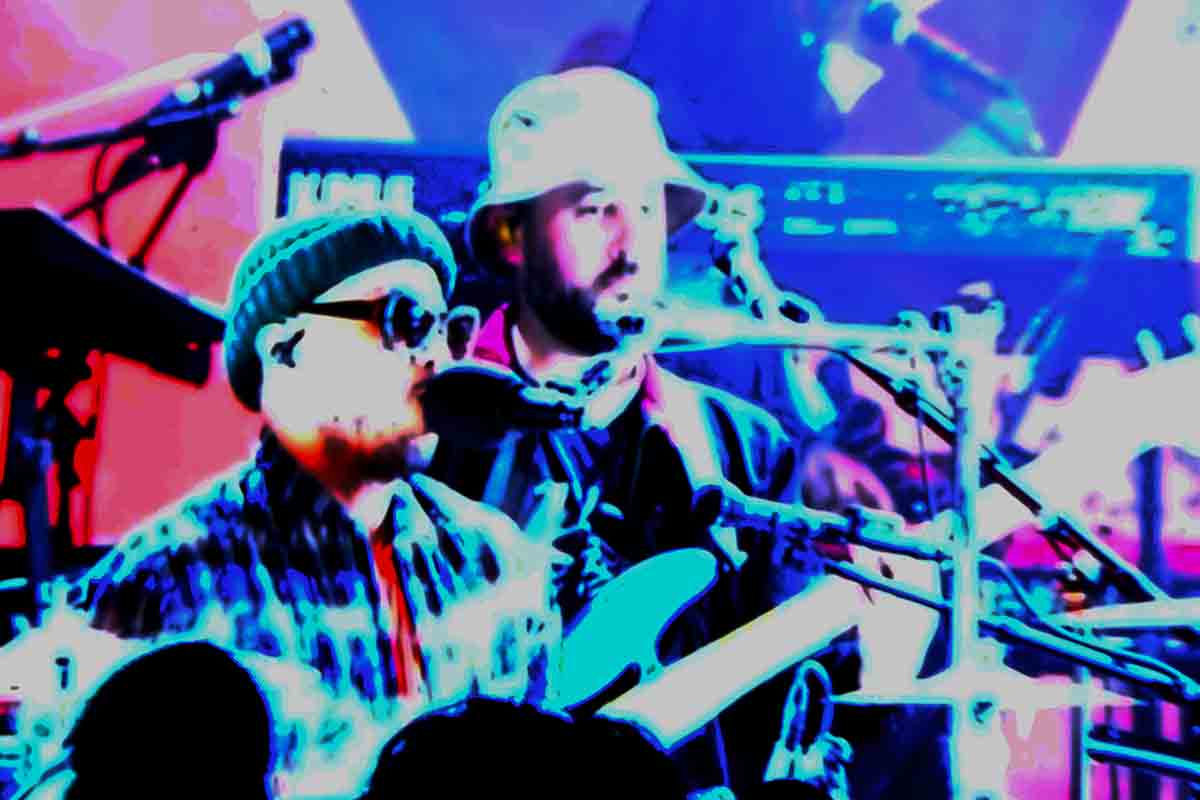 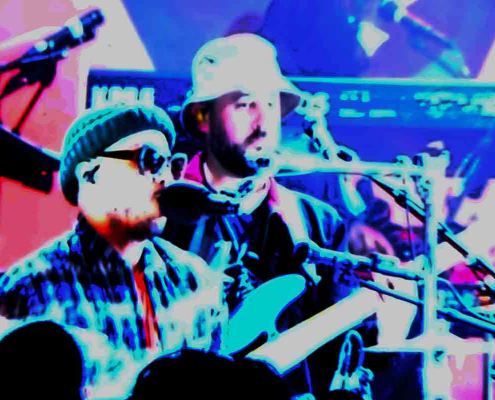 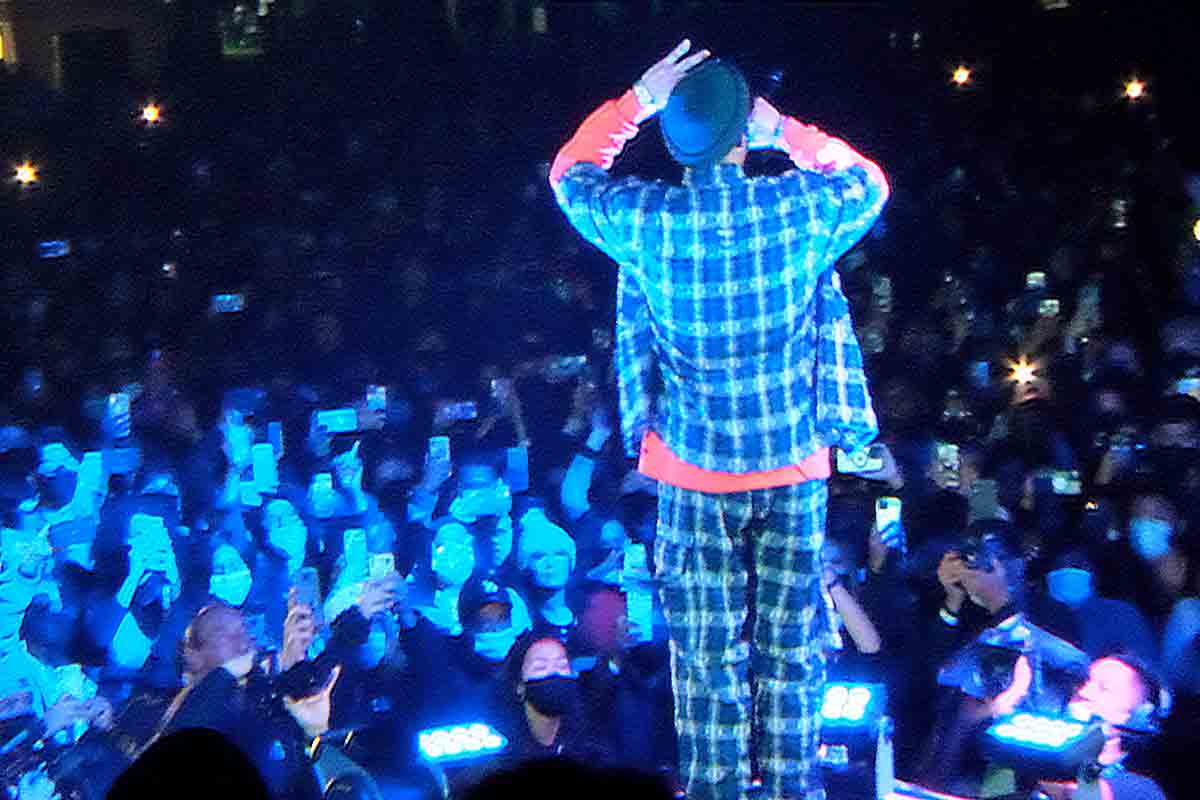 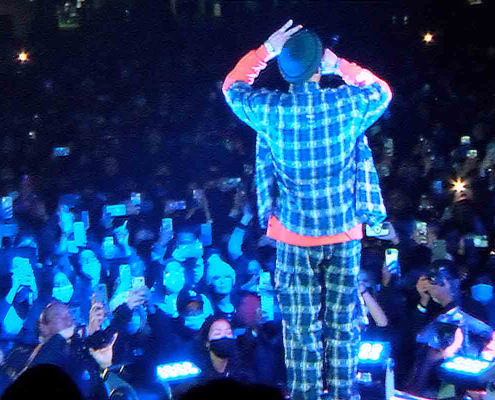 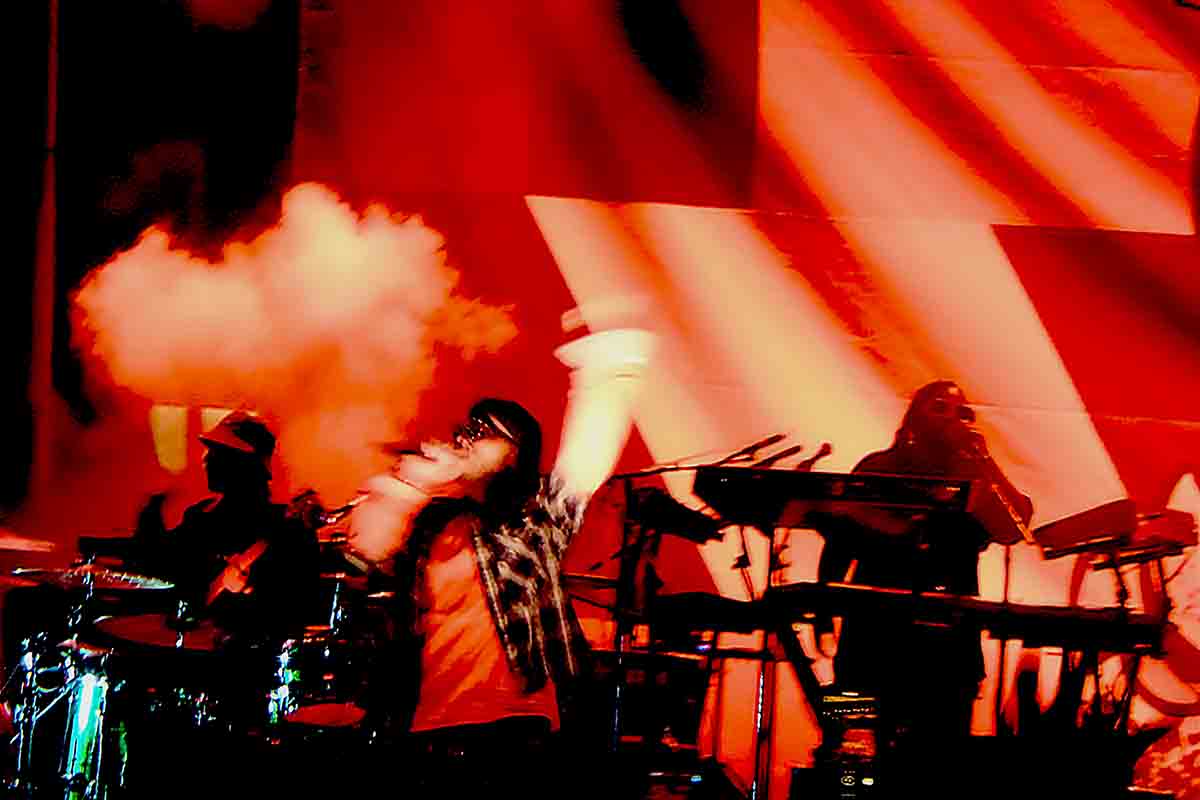 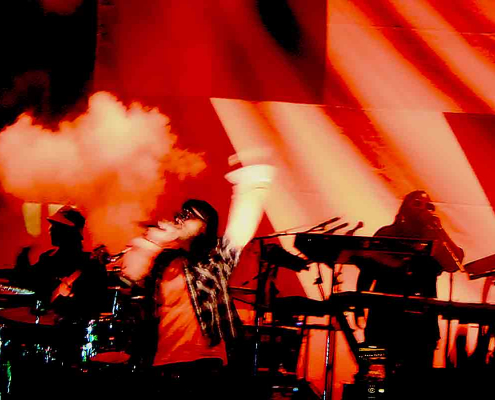 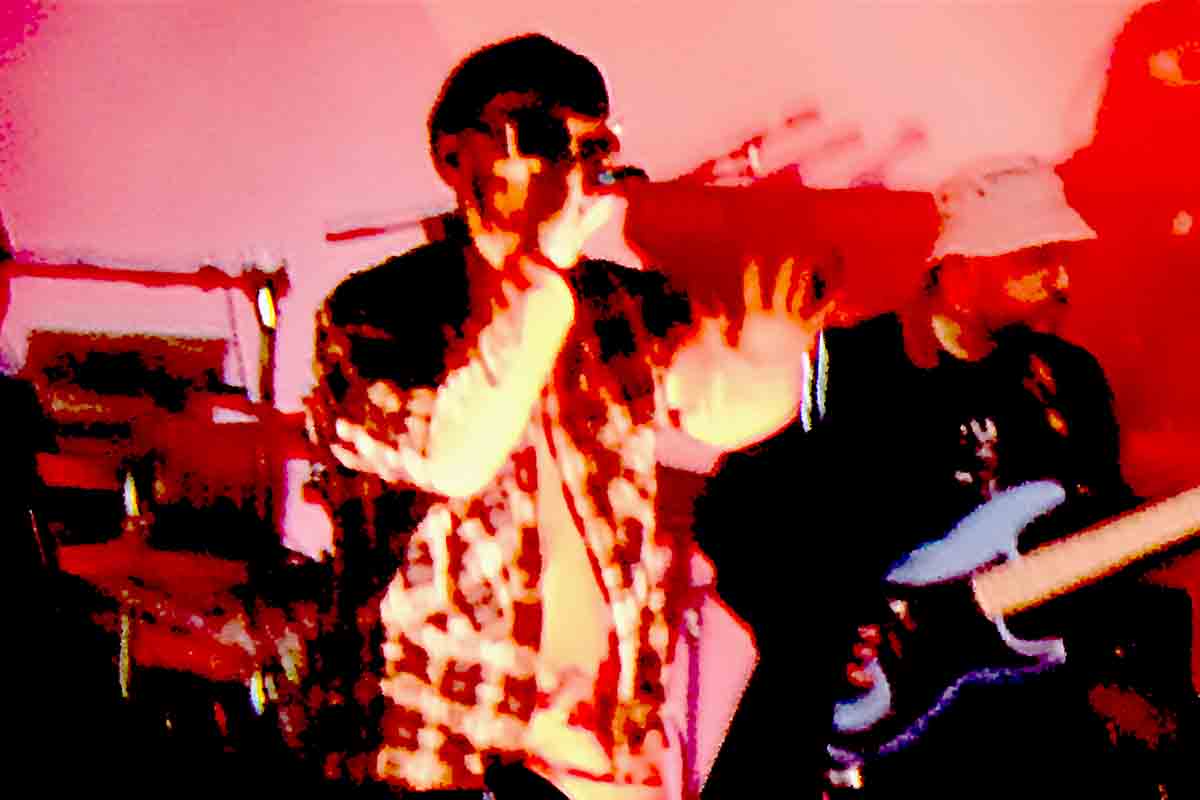 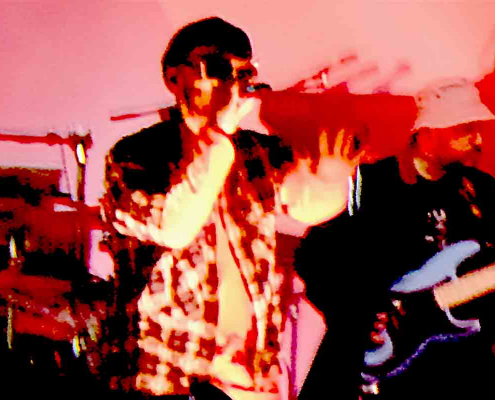 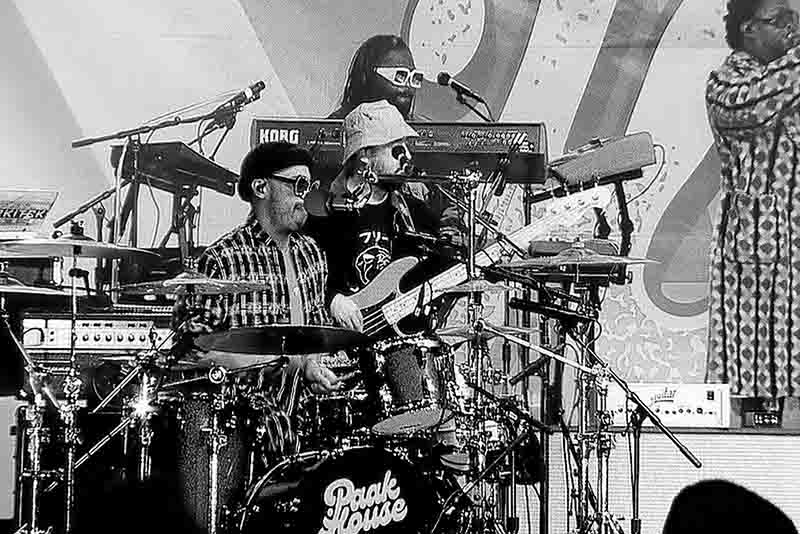 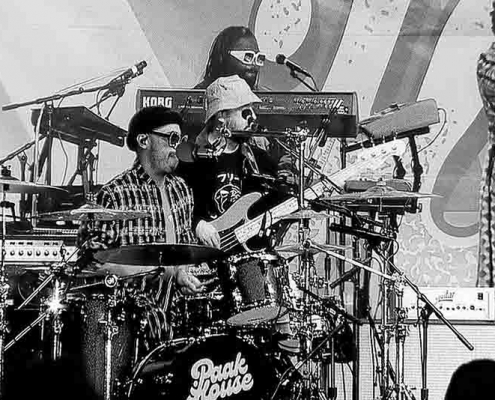 Even though this was a charity event, it was still a concert. The music should have mattered, but it was sparse. It looks like the organizer was trying to book various musicians, but the final lineup was never released even after the show started, and maybe half of the unofficial list didn’t show up. From 5pm to 10pm, probably 3 hours were spent by DJs. Non-DJ music was sporadic, and it was hard for audience to keep energy. I mean, 5 hours is a long time to stand in cold, humid weather. Joyce Wrice played several songs early, sandwiched by long DJ sets. Then after a while, Thundercat showed up! He played with the Free Nationals, and with .Paak on drums. Although he only played maybe three or four songs, his set was the highlight of the entire show. The musicianship of the group was insane, and they looked to be having a lot of fun playing together. Thundercat really saved this event. If his performance wasn’t there, the entire concert would have been just a shortened version of Anderson .Paak concert. I said “shortened” because, although the entire show was for 5 hours, .Paak and the Free Nationals only played for about an hour with only one encore song. They were supposed play a “full set,” so one could have complained that they didn’t play enough. But at the end of all the waiting, I think the audience ran out of gas, so a full set wasn’t needed anyway. Sorry for other musicians that also played, but it was so difficult to focus after so much wait time standing in cold weather. I thought India Shawn was pretty good. 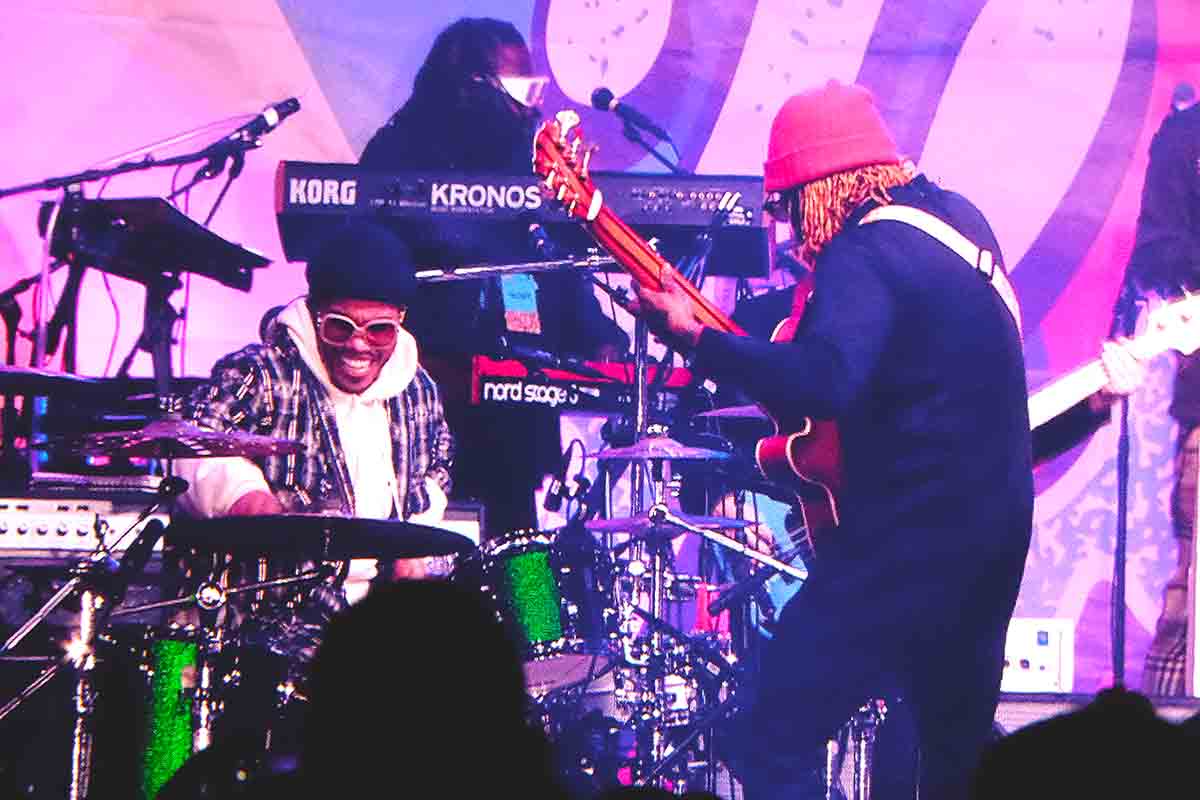 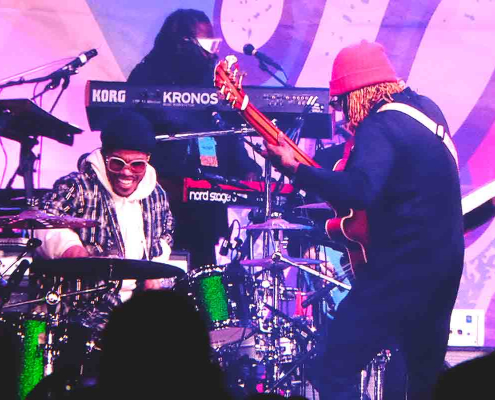 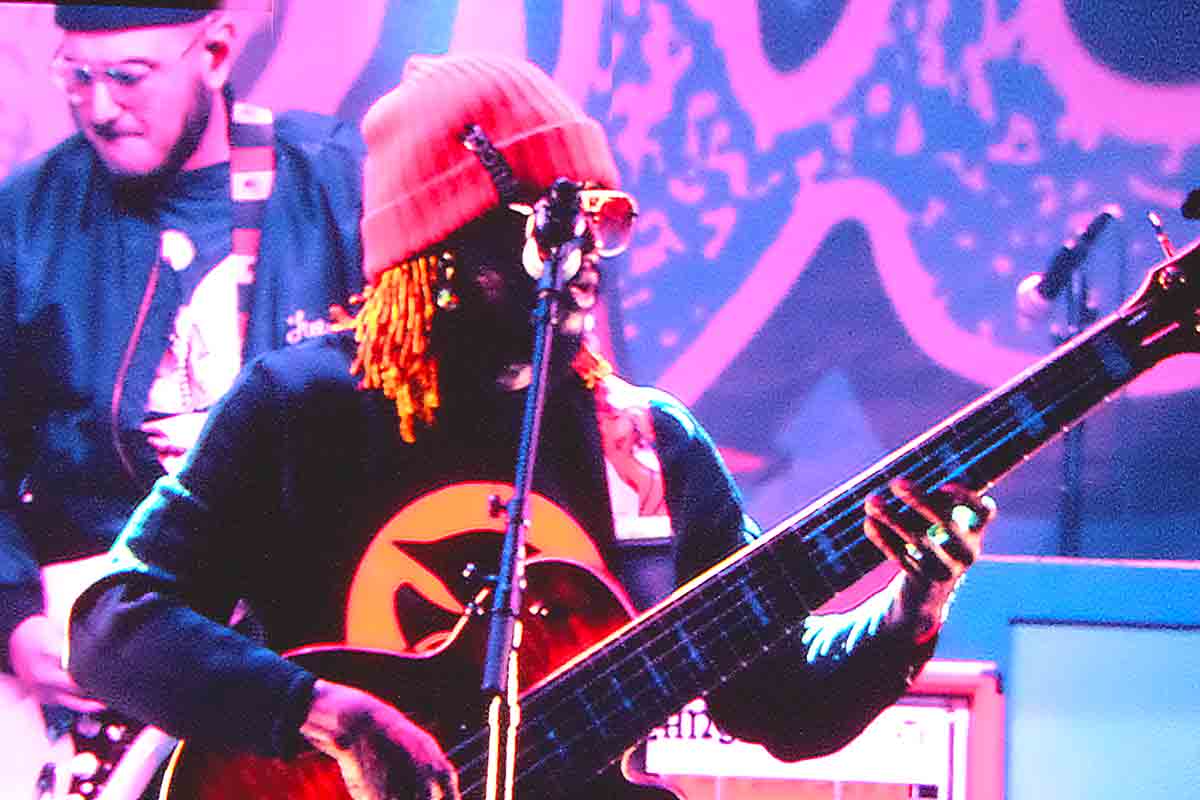 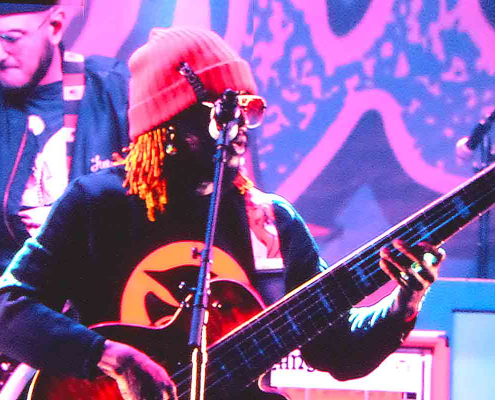 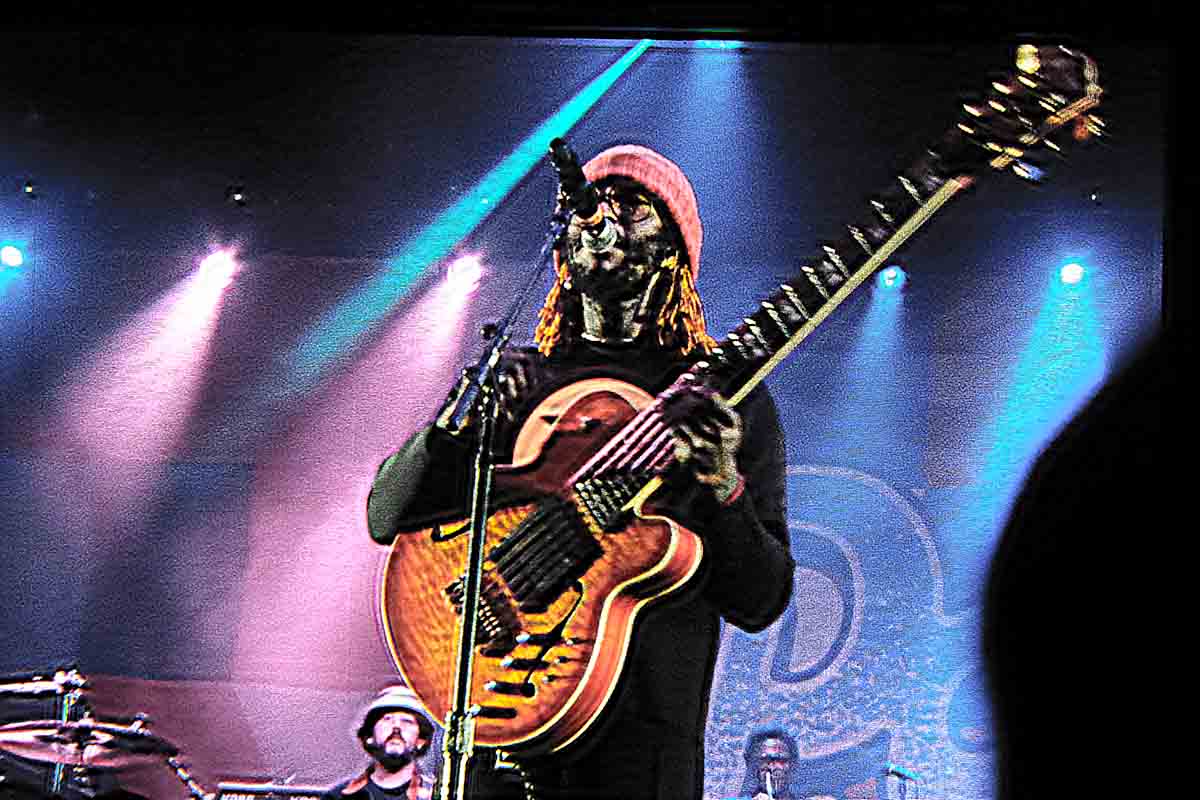 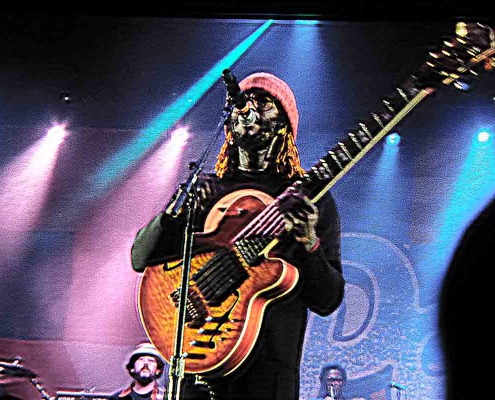 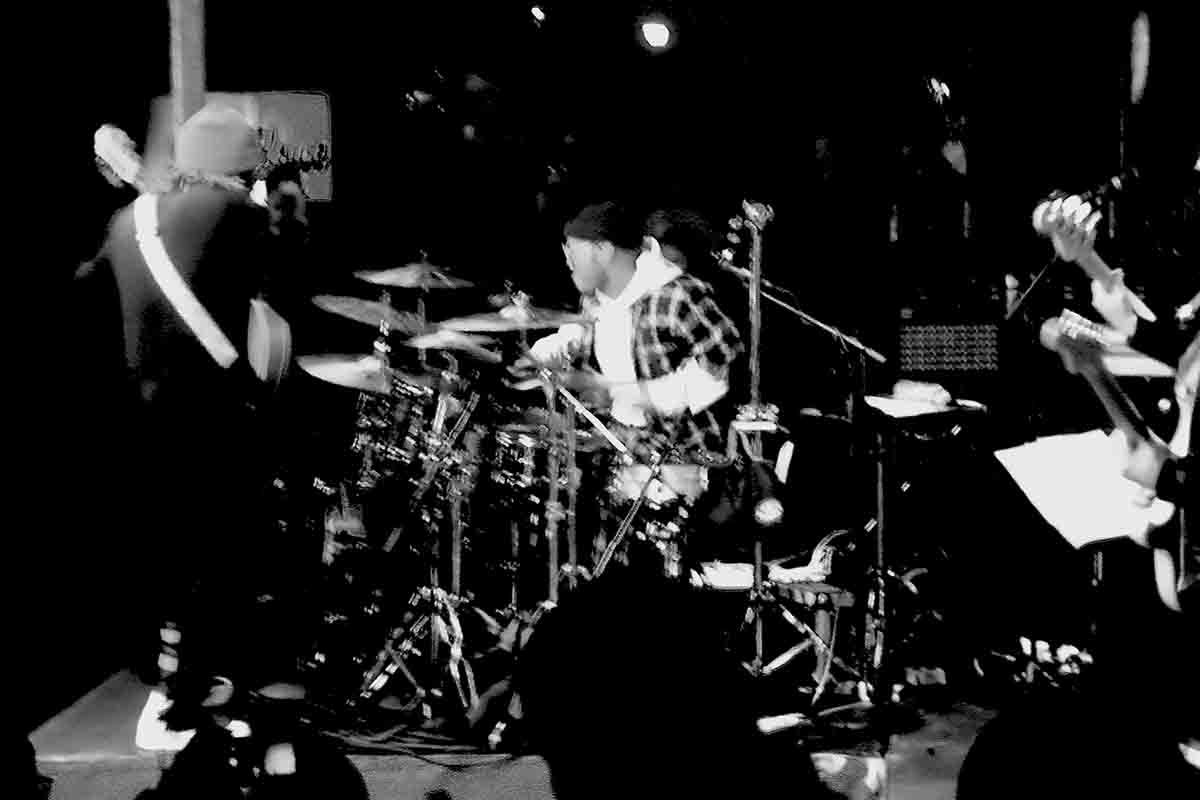 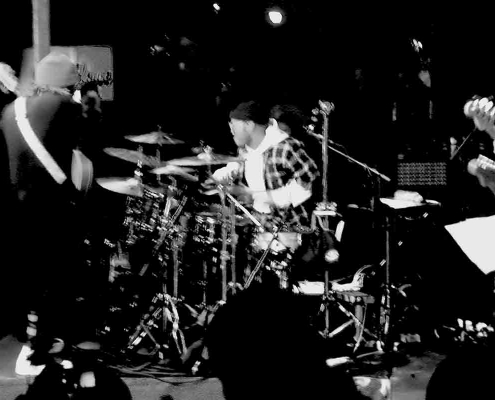 Thundercat on bass and vocal, Anderson .Paak on drums and the Free Nationals! It was an insane performance, and the fact that Anderson .Paak is a drummer can open up a new opportunities for an event like this. People don’t talk enough about how great he is as a drummer. His drumming is as great as his singing, rapping or writing songs. Instead of trying to put together a long list of guest musicians (and end up not having them on stage), he could invite a couple of musicians – instrument players – rather than too many singers, and just jam session. They could choose a song with simple chord progressions and play together impromptu, taking turns to solo, and showcase their musicianship. That spontaneous energy should be electrifying, as we already saw it in Thundercat’s set. If his organization is supporting young musicians, one of the top performers could also come on stage to solo for 16 bars each or something. Or maybe audition some young kids and invite them. That will be fun, and imagine how exciting it would be for a teen musician to be able to play with Anderson .Paak on drums!!!!??? 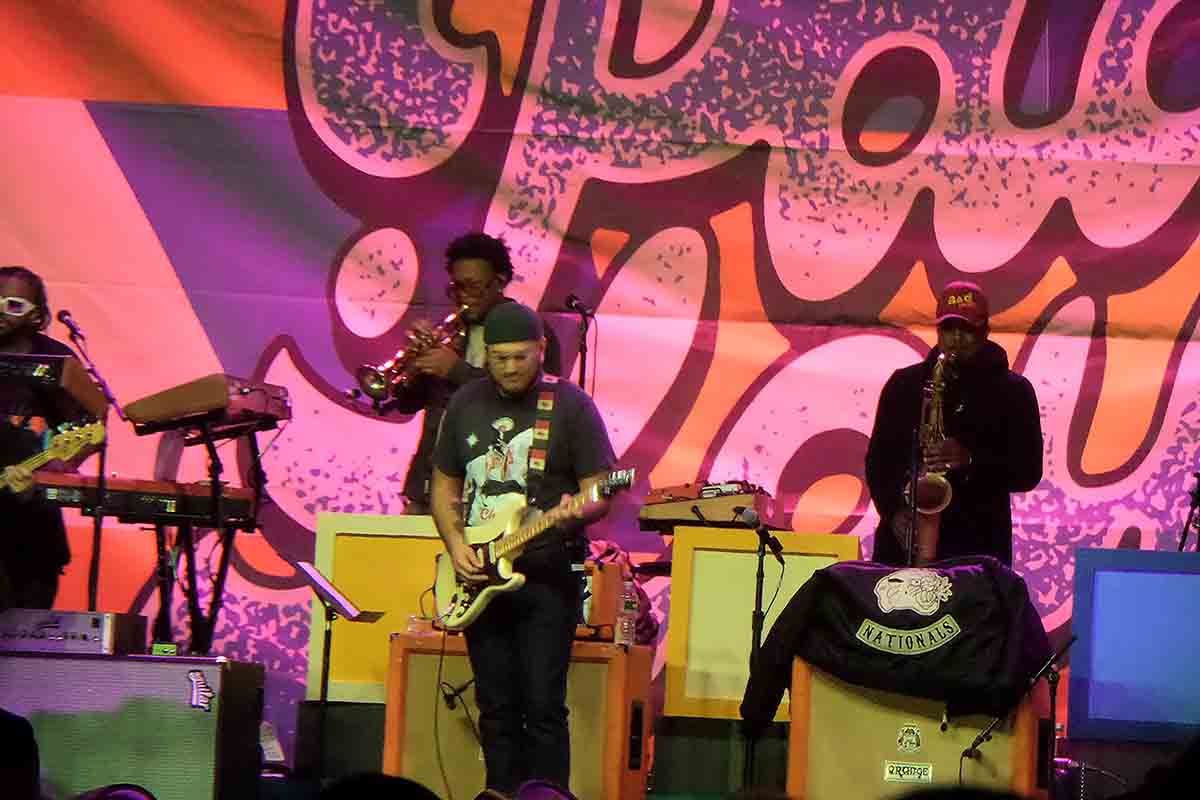 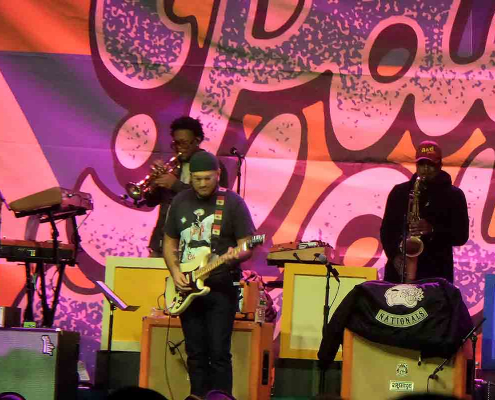 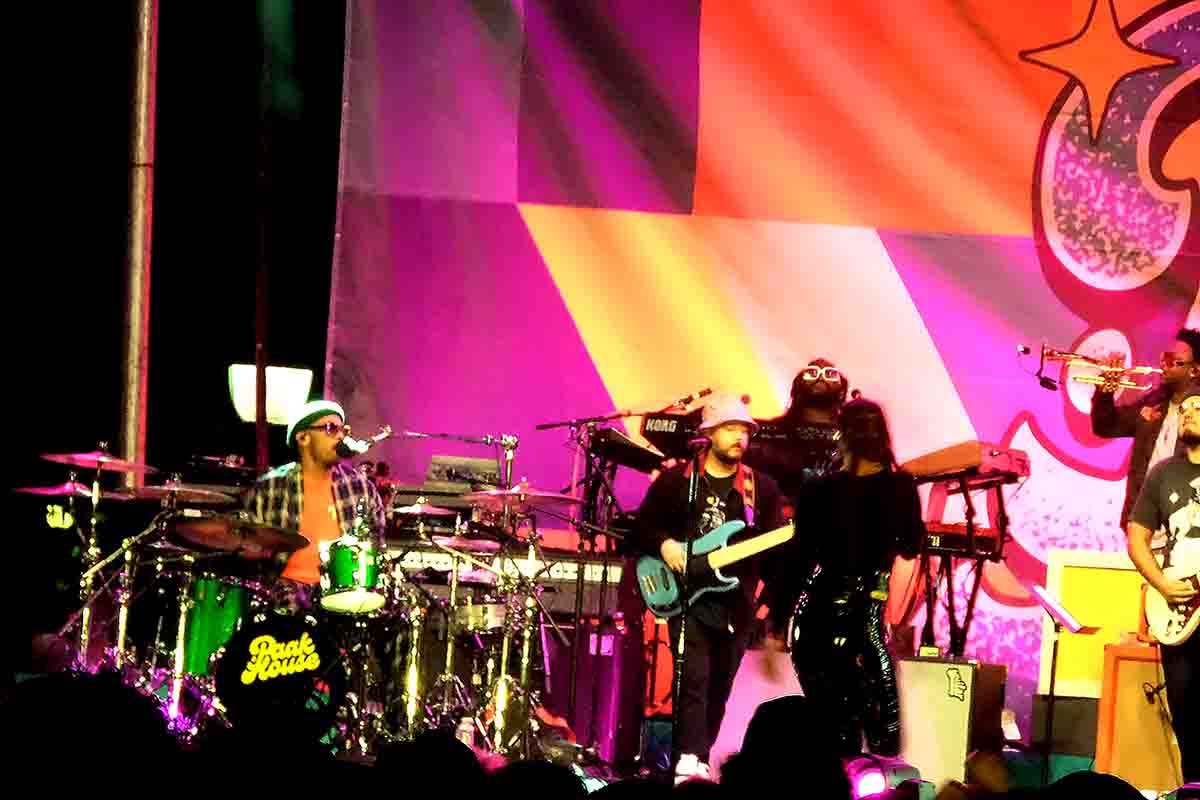 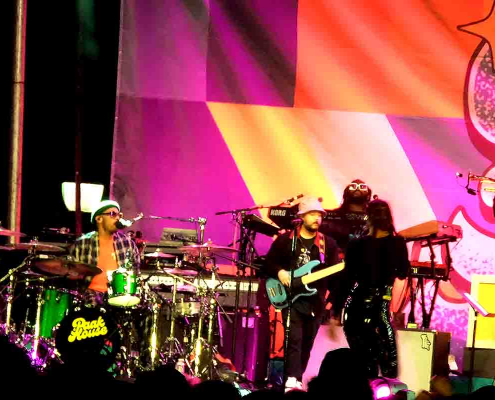 The stage was blocked by a huge canopy (I guess it was for livestreaming). People who wanted to buy food were stuck at food truck areas for 2 hours to get food. Then there were merch booths on the other side, where lines were equally stagnant (I heard that people had to wait for 4 hours). So there were people in front of the stage, behind the large canopy, at food truck areas and at merch booths, and they were kind of all separated. With so much DJ time, I feel like what people did at the event was to wait in line feeling hungry, thirsty and cold, rather than enjoying music. It was hard to feel the unity or togetherness you usually feel at a concert.

The event locked up thousands of people inside the park, and there was not enough food and drink. They ran out of water really early, and as no alcohol was sold, I think people were almost dehydrated. The restroom areas were empty! I’ve never been to an outside event where I didn’t have to wait in line to go to the bathroom. I spent TWO hours to order and get food, (no, I am not exaggerating!) and I had my family wait in a different line to get something drink. He could only get one diet coke, which kept us going for the entire night. Hope no one got dehydrated and/or sick, but the event organizer has to make sure that at least there is enough water on-site. It was close to a dangerous situation.

Merch booths were a total mess! I think people who were able to buy something just spend the entire show time waiting in line. We tried like 45 min, but as we saw that the line wasn’t moving at all, we gave up.

The mayor of Oxnard came on stage and accidentally called Anderson .Paak Andrew .Paak. That was one of the few funny moments in a day that was rather painful. Good job mayor.

December?? Not sure if it’s a good idea to do this in the middle of December in Oxnard. It usually rains a lot in winter, and indeed, it poured the next day. We were so lucky! The event would have been miserable if it rained.

I don’t need 5 hours. It’s too long for a winter outdoor concert. If the organizer had to struggle to book other musicians anyway, they could have made it like 3 hours cut DJs, and focus on live  performances from just a couple of guests. That would have been enough.

Good cause? There wasn’t much audience could do, other than waiting in line for food or merch, even when they were tired of DJ after DJ. The organizer could have put some booths by the groups supported by the Brandon Foundation. It would have been nice to know what they have been doing.

Where was that “city” in Japanese city pop? Antique vintage door designs from Locke, California
Scroll to top