MUJI, founded in Japan in 1980, offers a wide variety of good quality products, including household goods, apparel and food. Due to its minimalist/simple design, it’s often dubbed Zen design or commercial Zen.

Why is Zen associated with minimalism or simplicity?

Zen is one of the schools of Buddhism, founded by Buddha in India around 5~6 BC.  It is believed that Zen was introduced from India to China by Bodhidharma during the 5th or 6th century.  It was then introduced to Japan around the 11th~13th century.  Zen focuses on physical and mental training (notably sitting meditation), and denies text because it’s prone to different (sometimes contradicting) translations.  Zen believes that the true enlightenment can only be achieved by hard physical and cognitive training that forces you to talk to your body and mind at a very profound level.

But long before Zen was introduced, ancient Japan had developed the concept of “deity in everything in nature,” or “eight million gods.” Instead of believing in one mighty, well-defined god, Japanese in this ancient era believed that god was omnipresent and resides in every natural existence or event, such as forests, oceans, stones or storms.  God could be anywhere, but could be found nowhere. There was ambiguous room between nature – god – humans, and the boundaries were rather blurred.

One of the oldest architecture or design based on “eight million gods” philosophy is “Shime-nawa.”  First, the area that bridges deep nature (divine world) and humans’ world is chosen.  Then, four sticks would be stood to define the area. Once the strings are tied to them, the divinity would emerge inside the area.  Emptiness becomes filled with anticipation of the god.

Then, Buddhism was introduced from Korea in the 6th century.  Whereas there was notable tension as to how to reconcile traditional eight million gods and Buddhism, the two ended up blending rather naturally.  Especially “zero,” one of Buddhism’s core concepts – common to all schools, including Zen, must have settled deeply in Japanese people’s philosophy because it had something in common with traditional philosophy, such as eight million gods.

Zero in Chinese character is 空, and it means “sky,” “void,” or “emptiness.” In Zero world, everything is relative.  Even when we think something is existent, it could be non-existent if we change perspectives.  Instead of trying to decide whether or not it’s really existing, Zero tells us to accept that something  is as is. In Zero world, everything can be empty, but that emptiness can carry enormous potential just because its empty.  It’s profoundly philosophical, but the idea was embraced in Japanese culture and was applied in art and design.

MUJI is probably the best example of product design that embraces the power of Zero.  Kenya Hara, a prominent member of MUJI’s Advisory Board, advocates for the concept of “emptiness” in MUJI’s design.  Emptiness can be considered Zen design because it’s profound roots can be found in Zero of Buddhism, or even the concept of “eight million gods.”  Hara explains “emptiness:”

The first is the idea of “emptiness.” The idea of simplicity comes from Western contemporary design and takes a rationalistic form. But in traditional Japanese design, simplicity has a slightly different character. It is the simple form that gives users the freedom to develop their own way of handling an object. It is this depth that I call emptiness. MUJI essentially embodies this emptiness. For example, the MUJI mattress with legs can also be used as a sofa. You could also put several together to create an elevated floor. Giving users the freedom to use our products however they wish is what I mean by emptiness. We feel this is not something to be explained in words. Our visuals are designed to wake people to this emptiness so that users feel it the moment they seem them.

One of the MUJI’s signature products is “Pocket coil mattress.” It’s a small but super versatile mattress (or you also can call it a sofa or a bed) focused on providing comfort both when you sit on it or lie on it. The design does not interfere with any room settings. MUJI uses creative power to eliminate un-necessaries. Yes, elimination is an incredibly creative process. Image courtesy of Ryohin Keikaku 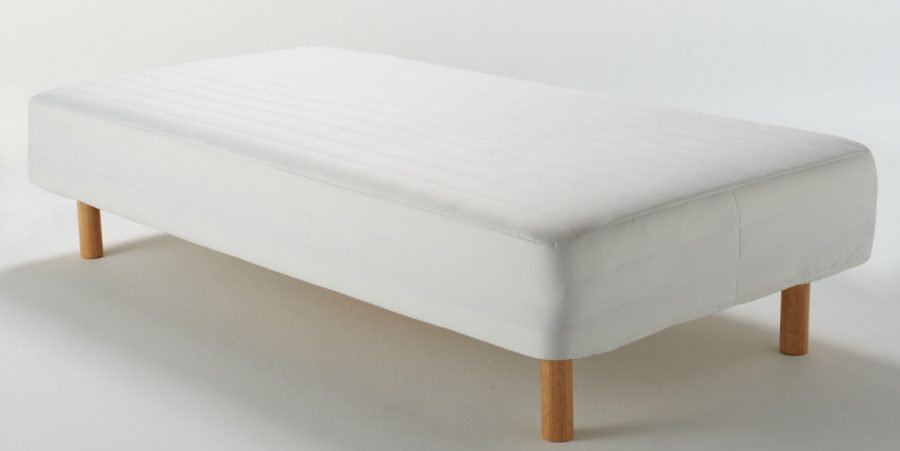 Because Zen denies text, prominent monks left their achievements (enlightenment) in many forms of art.  That is the reason why many people associate Zen with minimal yet mindful images and/or simple design.  But what the term Zen design or Japanese traditional design embraces is something larger than just minimal or simple.  It reflects a broader philosophy of Zero, or to live in harmony with nature.  Living in harmony with nature in Japanese people’s mind often looked like “yielding” to nature, rather than conquering it.  Instead of taking too much from it, they focused on letting beauty emerge from whatever they could have from nature.  Zero looks like simplicity and minimalism, but it’s a bit different because very careful effort is put in to eliminating frills, and those efforts are based on hundreds of years of artistic and philosophical experiments.

Tune-up your senses at optimal level through decluttering