The story about Kengo Kuma and the Stone Museum is fascinating. In his book “自然な建築 (Natural Architecture)”, he admits that stones were not his material of interest because he didn’t like the way modern architecture used them. But a small project in a small, rural Japanese town helped him make a great leap forward to re-define stones and their potential. 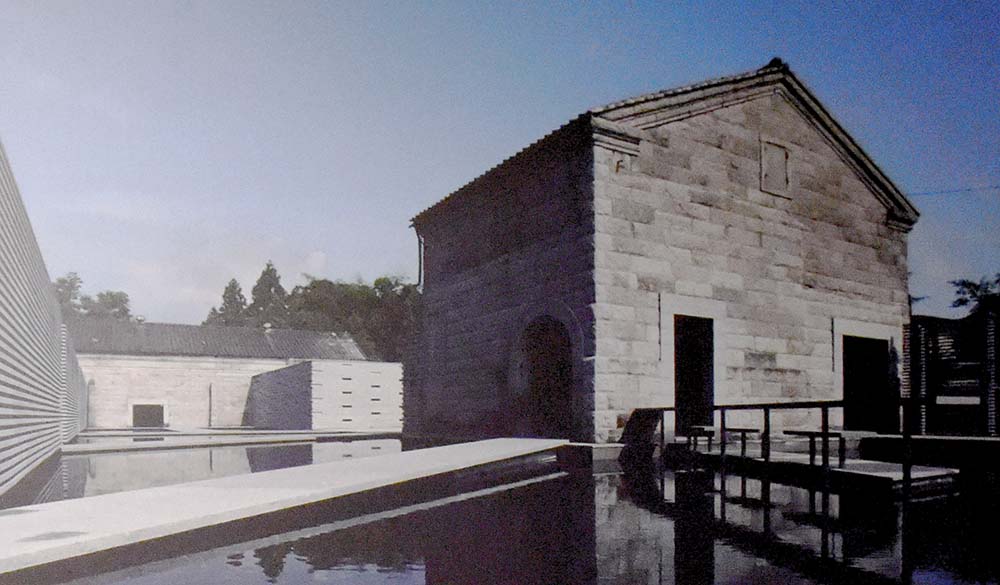 The Stone Museum is located in the Town of Nasu, Tochigi Prefecture. Leveraging the 80 years-old rice storage houses made of locally produced Ashino stone, Kuma re-imagined stones in the context of modern architecture. He used “whole” stones, as opposed to the sliced ones that modern projects use to save costs, but let a new feel of lightness and contentedness emerge by adding a certain sponginess to otherwise hard and heavy stone bricks.

Kuma considers construction methods as the Operating Systems of our society. In the way that OS such as Windows or Linux determine what kind of applications we can run on our devices to perform certain functions, he thinks that construction methods determine how we interact with nature. For example, when people used to stack hand-held sized bricks one by one, masonry was the OS that defined the scale of activities that could be performed by taking advantage of nature. It was a human-sized OS that had a small, comprehensible unit (individual bricks) that was transformed into structures through a human-scale activity (stacking).

But modern technology changed the nature of the OS of our society, says Kuma. With the emergence of concrete, we no longer needed human-sized OS for architecture. Things could be made very large on a non-human scale. We felt that our technological solutions finally became greater than nature, so we demoted nature as the most influential limiting factor of our OS, to mere decoration, such as sliced stones that would be “attached” to a concrete surface to make a building look like “nice and natural.”

Kuma had no appetite for replicating such modern-style buildings. So, when he visited his soon-to-be-his customer Mr. Shirai, the owner of a small stone processing company in Tochigi Prefecture specializing in locally produced stones called Ashino stone, Kuma was not sure what he wanted to do, even after he heard about the idea to renovate an 80-year-old warehouse made of Ashino stone to create a museum to celebrate stone.

But one thing Shirai casually said stuck to his head: “I don’t have much money, but I have skilled workers who could process the stones any way you would like. So please feel free to request us anything you would want to try.” 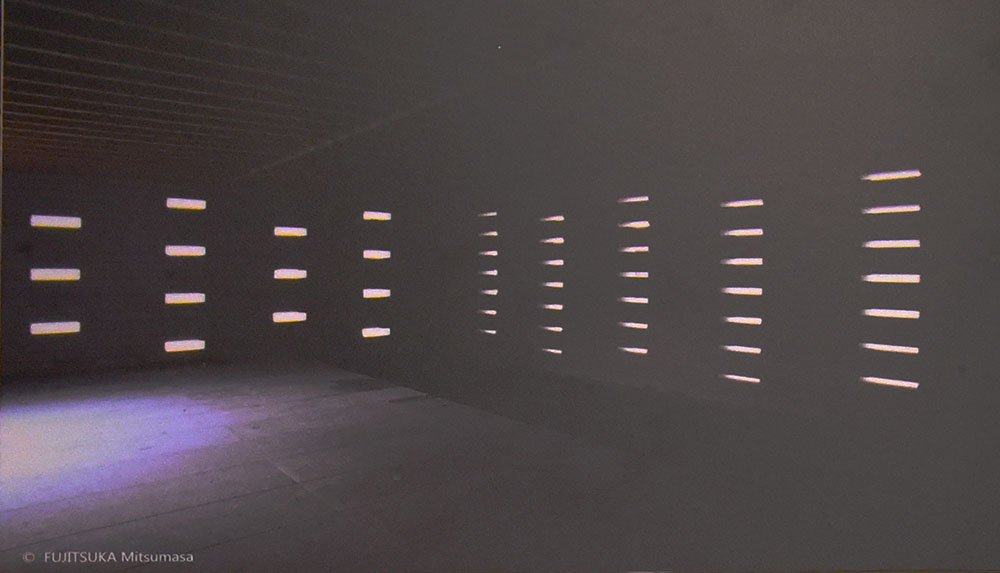 You face projects that do not have enough money all the time, remembers Kuma, but you’ll almost never come across one that allows an architect to access skilled artisans or workers with no limitations. In today’s world, an architectural project immediately becomes a cost management project once construction starts. It is strictly controlled by a construction company whose sole objective is to complete the building within budget. There is no room for an architect to explore new ideas on-site by improvising with experienced workers who know the materials best, because this would create additional costs or would be considered a waste of resources.

But in an almost abandoned old warehouse in a remote town, Kuma was offered unlimited opportunities to improvise and experiment with the potential of the material he had previously avoided, working directly with skilled workers who could make impossible possible.

That is how the Stone Museum project started. Shirai owned a quarry for Ashino stone, so the team decided to minimize the reliance on external resources. The building would leverage stones as much as possible, which came from Shirai’s own properties. The stones would be processed by his own workers. Contrary to today’s construction projects which are outsourced to many narrowly defined specialized companies, the Stone Museum would almost be completed leveraging only what the project owner already had in hand. What a simple idea!

By taking back the “ownership” of the construction process to the hands of the building owner, envisioned Kuma, they could offer an alternative to how a material like stone could be used in today’s architecture. He wanted to pursue “wholeness” and “directness” which was completely lost in modern projects when people started accepting unfortunate compromises such as attaching thinly sliced stones to the surface of the concrete in order to save costs and also to divide the responsibility of making deceptive buildings among a countless number of contractors. 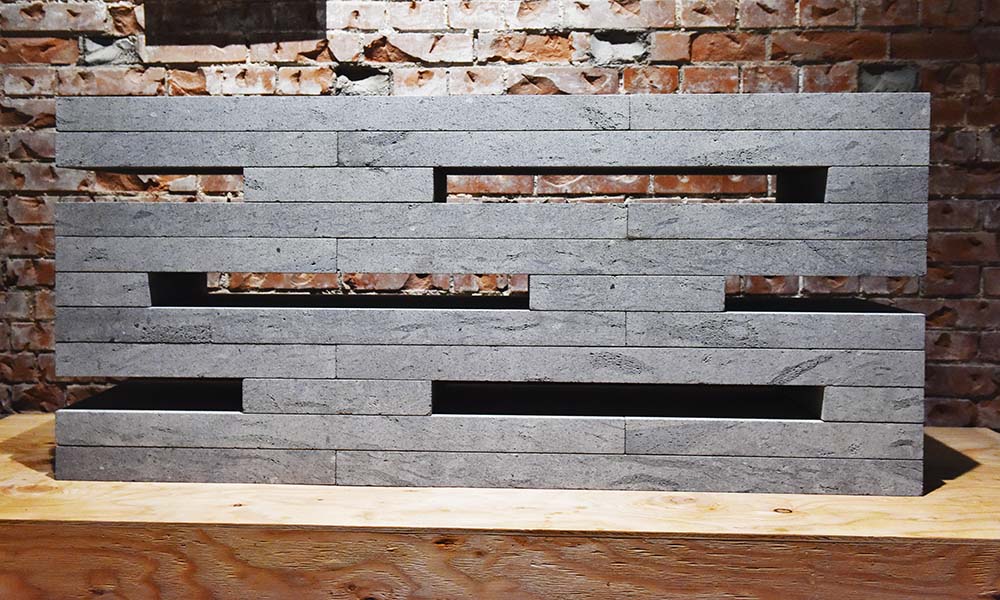 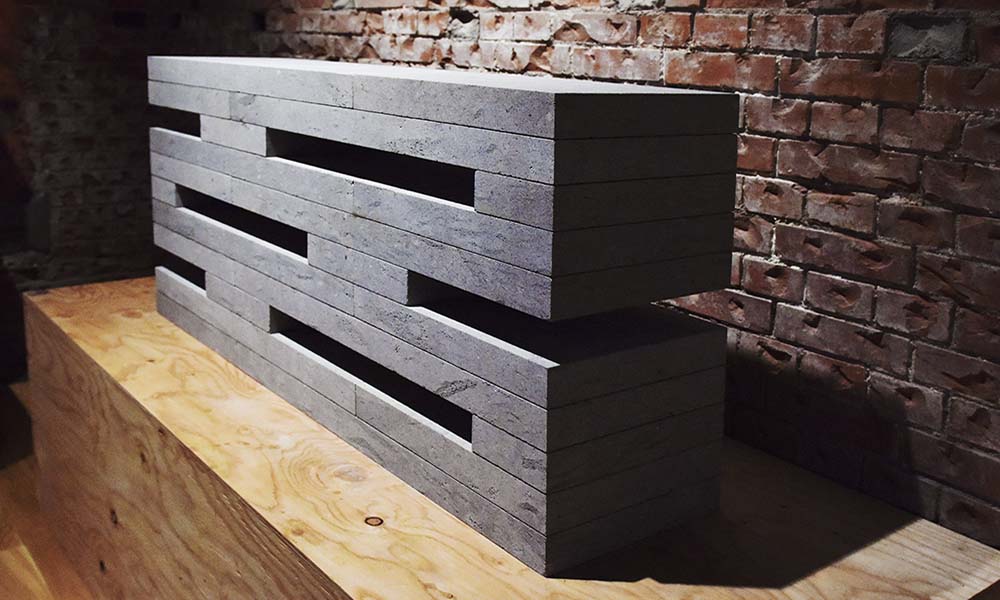 Kuma wanted to re-imagine masonry because he believed in its legitimacy as the OS that fitted our fragile human bodies. But he wanted to overcome its bulky, grim aspects. So he decided to remove 1/3 of the stone slabs to create voids, through which the interior of the building was directly connected with exterior. The effect was drastic, Kuma remembers. The masonry, the almost forgotten old-fashioned OS, suddenly woke up, invigorated by the fresh air and the subdued light that entered through the little holes.

By working with two skilled workers from Shirai’s company, Kuma also created a stone-made “lattice.” When he saw how stones suddenly acquired lightness after some of the stones were removed to let the ambient environment pass through the voids, he came up with an idea to aggressively pursue the “permeability” of the stones. But since he had never seen a lattice made of stones, he was not sure if it was a totally ridiculous idea. So he murmured, almost pretending as if he was talking to himself: “Well, I wonder if we could make some sort of lattice using those stones?”  Despite his worries that the experts would immediately push back, they replied: “Piece of cake!”

They jumped on the idea to make it a reality. No CAD, no official proposals or meetings were necessary. Using pencils and pieces of scratch paper, they discussed the details face-to-face and started making mock-ups in the backyard of Shirai’s factory. Once the thin slabs – of the correct length and thickness – were ready, Kuma asked the experts how they could make them into a lattice structure. One of them said, “Well, you make stone pillars with hollowed flutes.” And he started scraping off of the surface of a stone pillar to let beautiful hollows emerge. And that’s how Kuma and the team created a stone lattice that no one ever imagined.

As Kuma says, this project did not have an abundant budget, but it made them recognize the abundance of what they already had. The fact that there was little money reminded them how to leverage their own assets and resources. And as it turned out, it was the complete opposite of the goals that modern architecture had been pursuing: wholeness instead of divisions, DIY instead of outsourcing, and direct human touch instead of large, non-human OS. Restriction is the mother of invention, and restriction is another face of nature, as Kuma reminds us.

Kengo Kuma Exhibithion: A LAB for materials – Mushizuka (Mound for In...
Scroll to top