In his book “自然な建築 (Natural Architecture),” Kuma remembers how he enjoyed playing in bamboo woods when he was a child. Bamboo woods typically have bamboos only because their root systems are interconnected underground, creating a unique view comprised of hundreds or thousands of freshly green, jointed stems that keep rising taller and taller. “I’ve always wanted to use bamboos for architecture,” says Kuma, but they had critical shortcomings: they lacked the strength to become structure.


But he was not interested in using bamboo for cosmetics. He felt the beauty of bamboo was its ability to grow higher leveraging its unique root systems that held tight on to the earth.

One of the turning points came when he had a chance to experiment CFT (concrete filled tube) using bamboos. He replaced tubes with boiled and un-noded bamboos, poured concrete inside them and used them as structure and walls for a house. It worked. So when he received an offer from a Chinese entrepreneur to design one of the houses for the “Commune by the Great Walls”, bamboos came to his mind as the material-to-go.

When a Chinese entrepreneur Zhang Xin bought the property by the Great Wall that failed to secure a permit to develop a golf resort, she came up with an idea to create a “commune” in order to step back and think about what China’s own contemporary architectural identity should be and could be. She was feeling that China was too focused on growing at a mesmerizing pace by automatically copying what other industrialized countries have done. She named the project the “Commune by the Great Wall,” and invited 12 aspiring Asian architects who would design his/her own building.


Moved by her passion, Kuma agreed to participate. He was determined to use bamboo because it has a long history and shared both by Chinese and Japanese. He proposed to build a bamboo house on a rocky, hilly and barren land without bulldozing off or leveling it. Just like the Great Walls which were built on the natural landscape without resisting its radical ups and downs, his bamboo house would yield to nature. It would be the complete opposite of what modern architecture has been doing in China.

The Bamboo House stood on natural landscape, almost looking like its buried in it. The horizontal and vertical lines stand out in the rocky environment.

The project owner loved the idea, but the construction companies were not impressed at all because they have never built a house using bamboos. But after multiple iterations and negotiations, they finally agreed to work on it.

Initially, the offer was for architects to deliver a design plan only. Local construction companies would take care of the rest – no involvements needed by the architects. But then, Budi Pradono, an Indonesian architect who was working at Kuma’s office when the project took place begged to be dispatched to the construction site to supervise the process. Because the original offer was just for a design, there was no budget to accommodate travel expenses. But he was adamant. He even proposed that he could keep the costs under $2,000 to stay in China for one year (!) Impressed, Kuma decided to send him to China.

As it turns out, a project like this that leverages natural materials could not be perfectly replicated. Local constructors decided to finish bamboos with oil bath, so the appearance looked very different from the bamboo house Kuma designed in Japan. Then, even though the plan required the bamboos to be 6 cm in diameters, Budi Pradono saw many bamboos that did not meet the specifications. Some were even slanted a little bit. Meticulous Japanese would have made sure all the bamboos would meet the spec, Kuma thought, but such local differences would be what makes each building unique and truly local. So Kuma did not reject them. 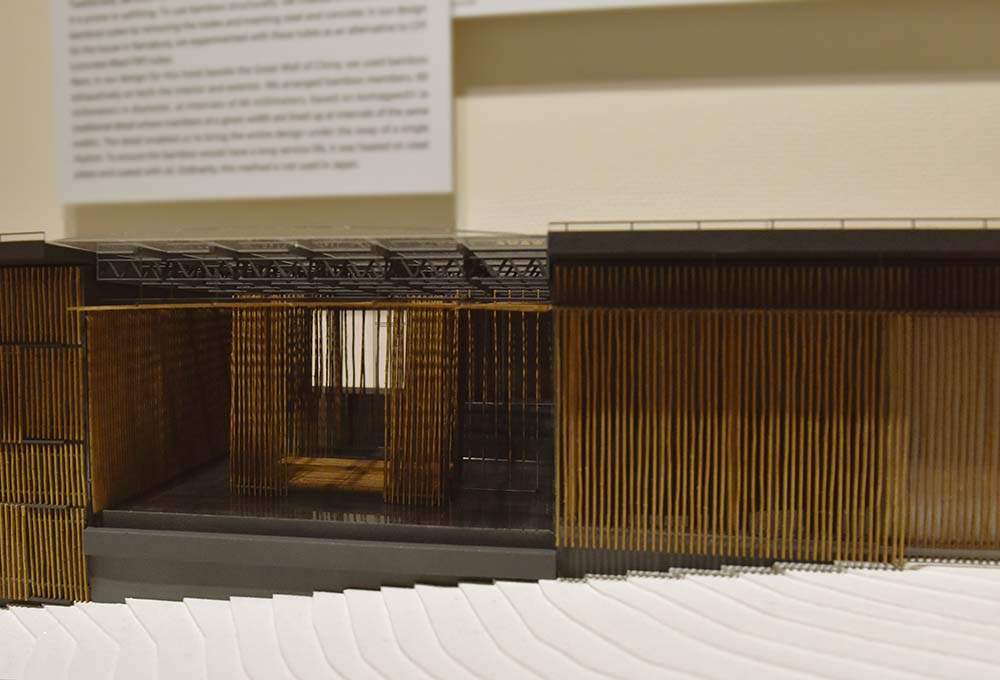 Isao Takahata and his pursuit for true reality