Kengo Kuma often likens his architecture to clothing. Countering the strong and divisive modern architecture represented by concrete and steel, Kuma pursues “loose wholeness,” which aims to create an organic continuity between the the natural and human worlds. Kuma believes that clothing is a type of architecture that achieves the loose wholeness closest to our bodies, because it connects our bodies with the outside environment softly, lightly and flexibly while providing protection and comfort to our skin.

Kuma often “weaves” materials to construct buildings as if they were textiles that form clothes. It was inevitable that he designed many 茶室 (chashitsu), the traditional Japanese tea room or tea hut used for tea ceremony gathering, which are often compared to clothes. 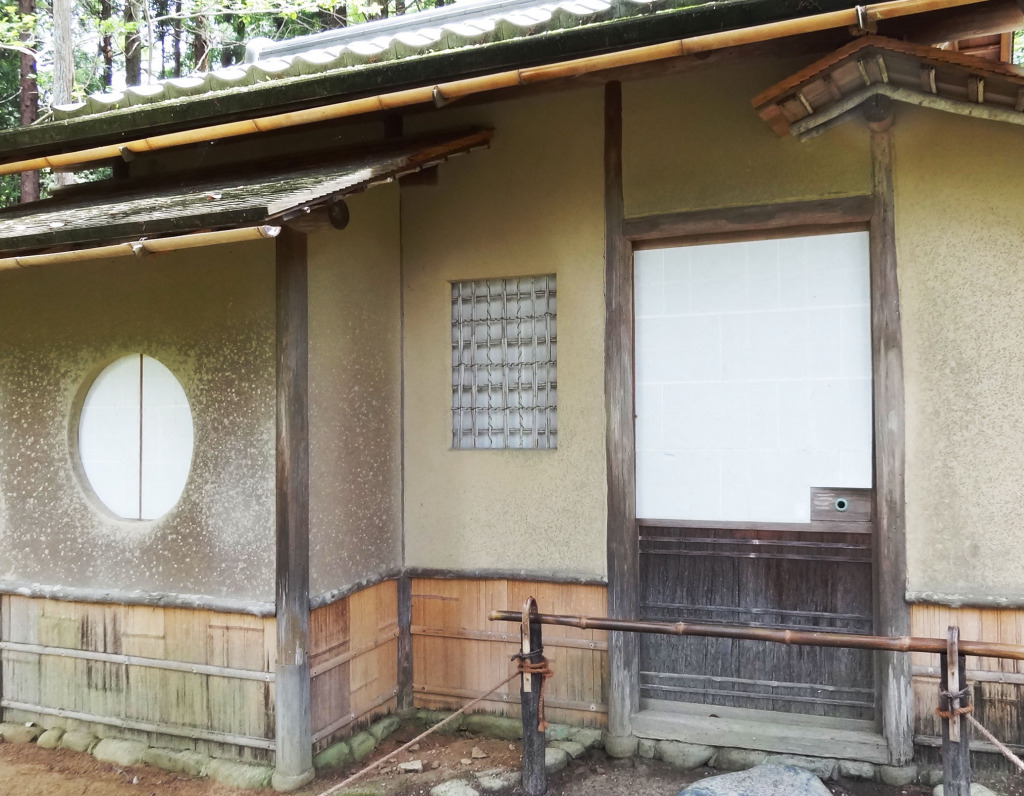 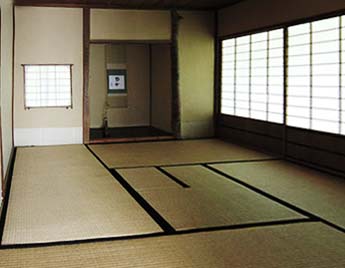 The Chashitsu was created to house the tea ceremony, especially wabi-cha, which emerged to counter the extravagant tea parties that were popular among the upper-class samurai and aristocrats in the 16th century. At those parties, people competed to show off the expensive artworks they collected. Wabi-cha attempted to reverse the direction and find beauty in raw nature, small, everyday life events/behaviors and items were created by anonymous artisans and craftsman, not by famous artists. In order to accommodate such aesthetics, the chashitsu was designed to be small, simple, no-frills using “bucolic” materials. By nature, the chashitsu was an odd animal that was outside the framework of authentic Japanese architecture.

In a book “茶室学 (Chashitsu Gaku, or Studies on Tearooms, Rikuyo-sha, 2011)” the architectural historian/architect Terunobu Fujimori (who, by the way, designed many unusual tea rooms) talks about chashitsu with architect, Arata Isozaki. Isozaki points out that the chashitsu was “counter-architectural.” It denied traditional architectural contexts and protocols, and by doing so, it freed itself from formality so that it could pursue a minimal structure that needed only to “envelope” our bodies. “Physical materiality” was the central focus of the chashitsu, observes Isozaki.

Fujimori: “So chashitsu is the most “clothes-like” architecture.”
Isozaki: “It’s rather an extension of clothes.”
Fujimori: “Chashitsu is the only type of building in the world that you can “wear.”

http://www.eonet.ne.jp/~myoukian-no2/In his book “小さな建築 (Small Architecture), Iwanami Publishing, 2013,” Kengo Kuma describes his experience at the 待庵 (Tai-an), the tea hut of less than 4 square meters designed by the legendary tea master 千利休 (Sen no Rikyu) in the 16th century. Tai-an is registered on the National Treasure and is considered the “ultimate small” in Japanese architectural history.

Kuma writes: “In order to truly appreciate the beauty of Tai-an, you’d have to crawl into this small box – almost as small as your body – sit in there and experience the moment at which the small space, which was taking up every little space around you, starts enveloping and embracing your body so lightly and softly.” Kuma notes that it did not help to study the plans or pictures because they couldn’t tell you how the grim-looking earth walls would magically turn into feathery clothes.* He observes that Rikyu employed some almost acrobatic, avant-garde techniques to make this small hut miraculously light, soft and to connect it directly with the vast universe.

For Kuma, chashitsu, or the ultimate condensation of space, was full of architectural adventure to achieve “loose wholeness.” Leveraging soft and light materials that are usually considered not suitable for construction, Kuma created many unique, “clothes-like”, temporary and mobile pieces of architecture. None of Kuma’s tea houses (or tea huts) look like a conventional chashitsu, but they pursue the original ambition of the chashitsu which is to eliminate monumental significance from architecture and to acquire a rudimentary physicality and agility that allows you to dissolve into the outer environment.

* NOTE: Unfortunately, the inside of the Tai-an is not open to public. You can make an appointment to see it from outside. 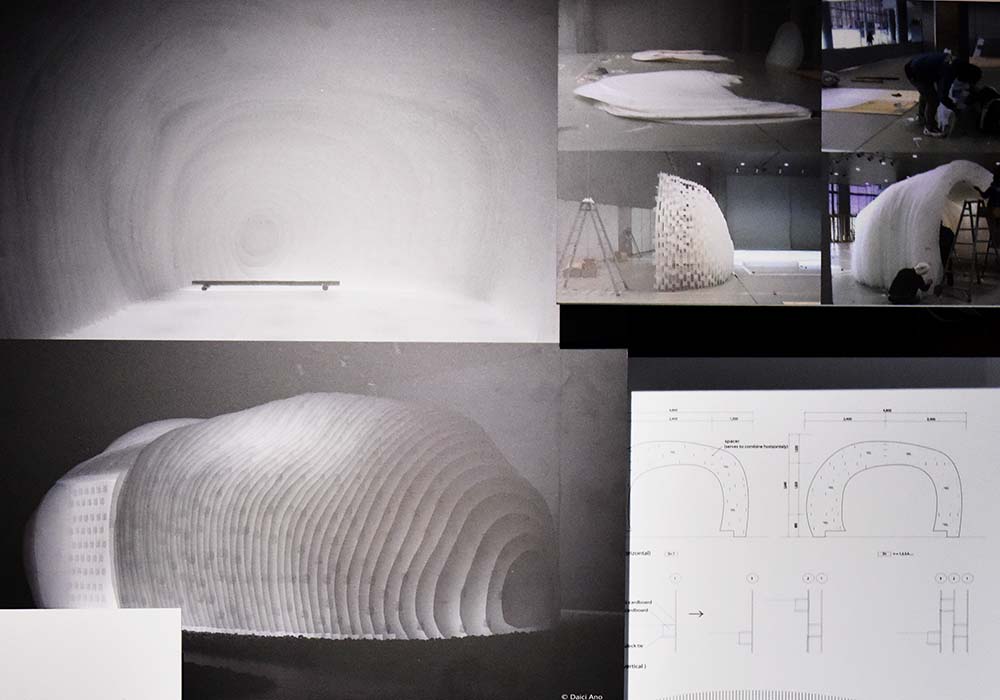 The “Oribe Tea House (2005)” was designed at the request of the Ceramic Center in the Gifu Prefecture to honor Furuta Oribe (1544 – 1615), who hailed from Gifu and was one of the most prominent apprentices of the legendary tea master, Sen no Rikyu. Heavily influenced by Rikyu, Oribe became his most prominent successor and pursued his love of unconventional and avant-garde beauty. He used what he described as “distorted” ceramics (hand-crafted, rough-hewn, and asymmetric) for the tea ceremony. Tea tools, mostly made of ceramics, vases/flowers and hanging scrolls are the almost only items allowed during the tea ceremony that symbolize the aesthetics of the hosts.

Oribe’s primary occupation was as a samurai bureaucrat. He is believed to have worked at the equivalent of the ministry of the economy. As a tea master, he pursued beauty found in distortion which could have been considered “no value” in economic markets. And as a government official, he seems to have attempted to commercialize handmade, crude products in order to promote economic growth, Kuma says. Although it’s not a proven theory, Kuma designed the “Oribe Tea House” inspired by the possible duality in Oribe. Kuma chose corrugated plastic cardboard – a relatively cheap commercial material intended for economic efficiency – to appreciate Oribe’s passion toward unusual items and innovative ideas to commercialize them. Kuma cut the plastic sheets into different sizes to express distortion, which were connected together to shape the uneven whole. 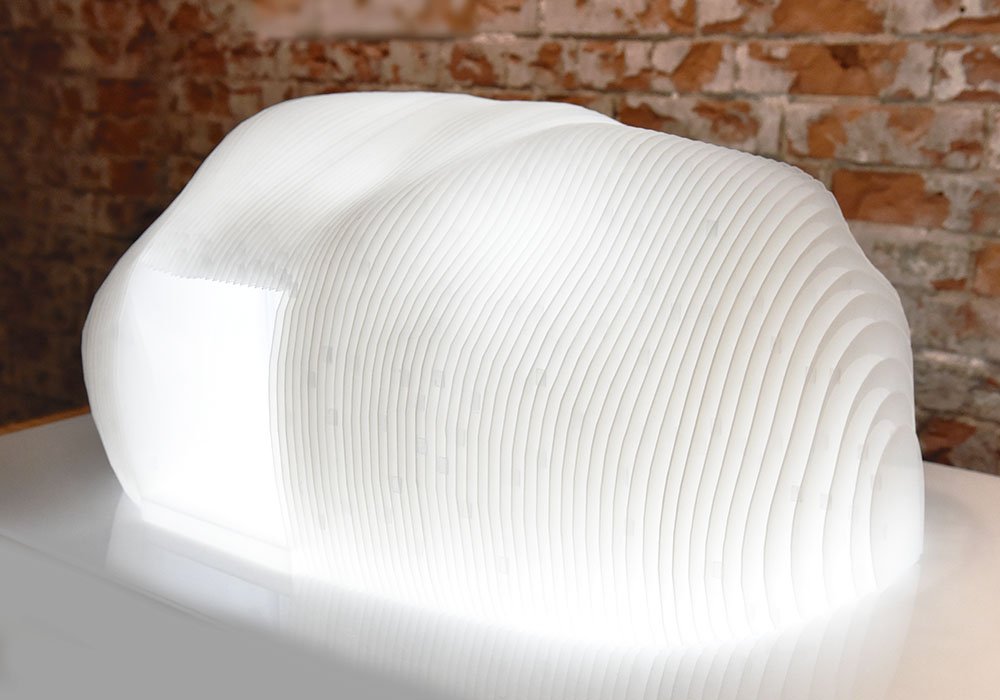 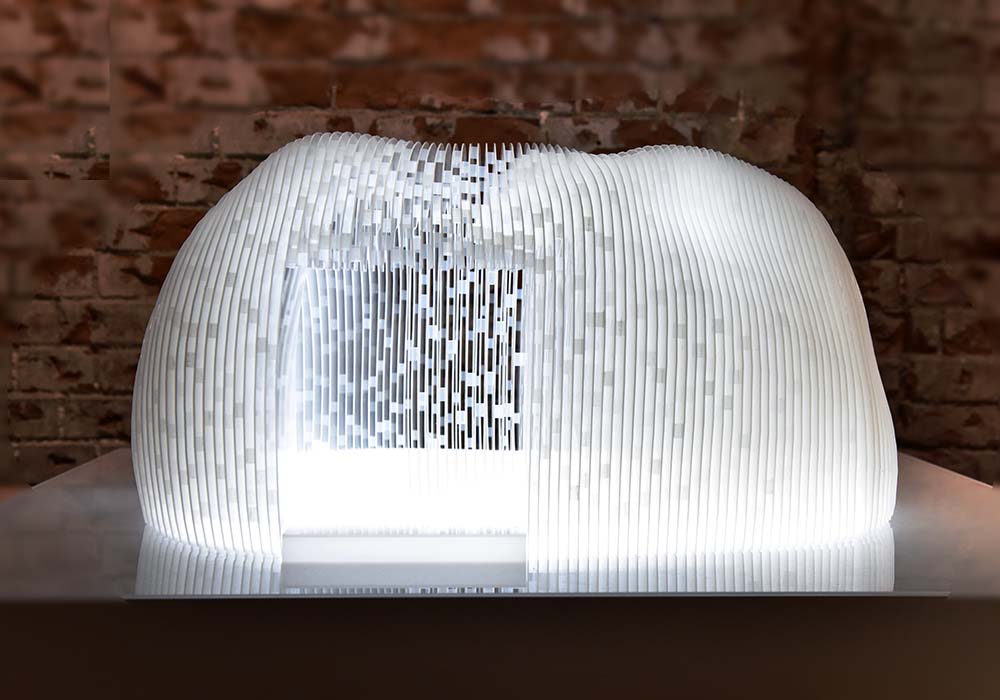 The “Tee Haus (2007)” was built at the Museum Angewandte Kunst in Frankfurt, Germany, which is one of Kuma’s favorite museums,. designed by Richard Meier in 1985. He was excited to design a tea house at his favorite museum but he was given a difficult task. “German youngsters can be rough,” declared the then-Executive Director of the Museum, Ulrich Schneider. “Please do not use any natural materials such as wood, earth or paper.” He did not want the visitors to “vandalize” the exhibit.

But Kuma is known for using natural materials to make soft and delicate architecture. He was confused: “What am I supposed to do if I cannot use my signature materials to create a tea house, one of the smallest, most clothes-like and flexible architectural format? 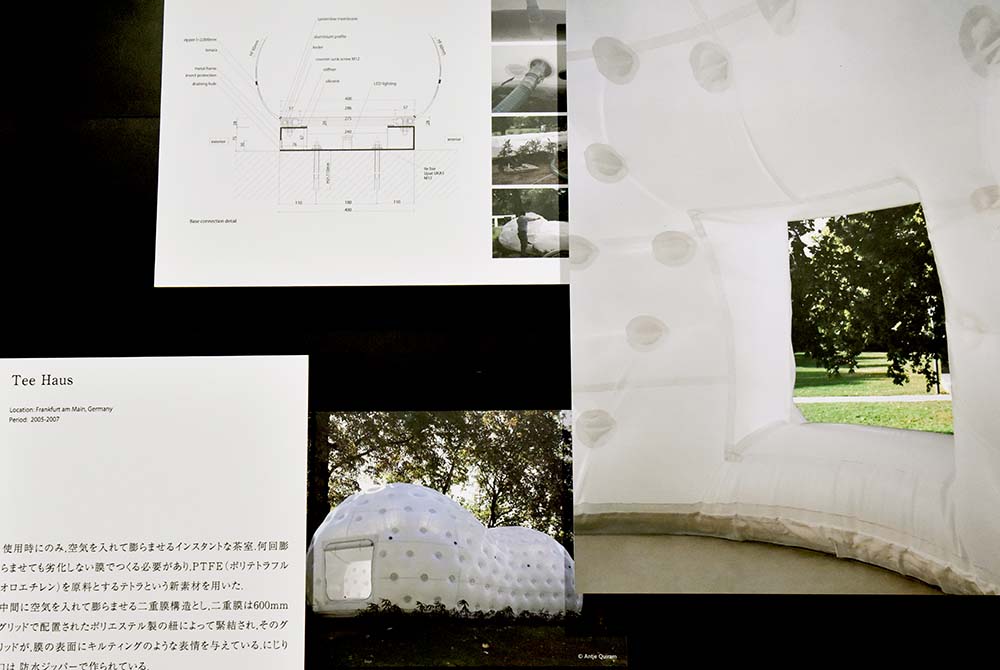 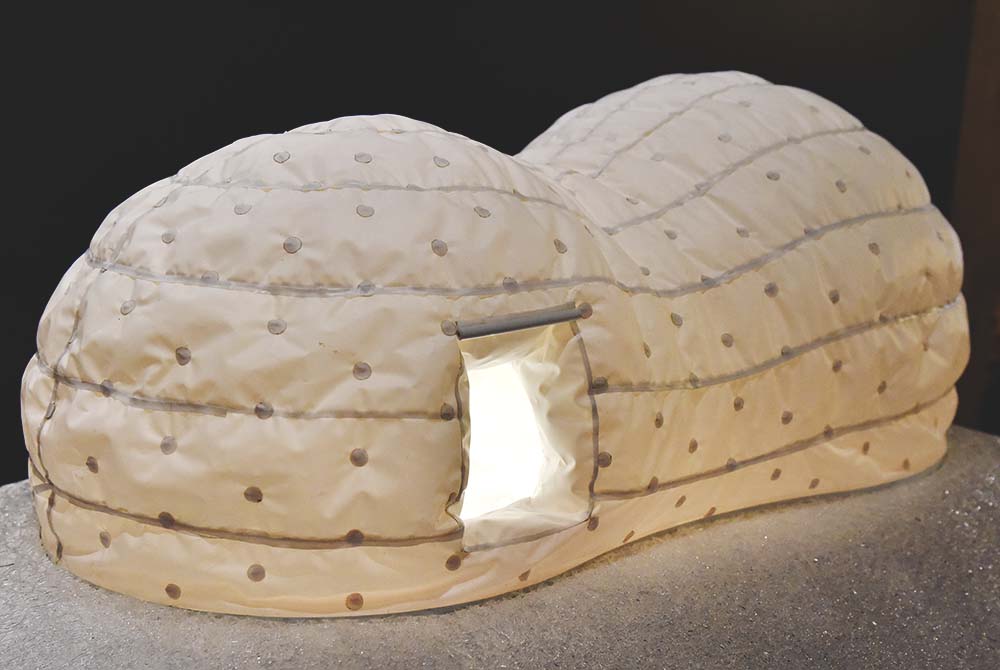 But one day, it dawned on Kuma: “What if I design something like a balloon that can be inflated only when people use it?” One of the characteristics of the tea house in the 16th century was its mobility because many samurai – who had to travel to fight – took part in the tea ceremony: Rikyu’s Tai-an was first built at a battlefield for his boss Hideyoshi who was fighting a crucial war to become a shogun.  Many chashitsu were built as make-shift, temporary venues for the tea ceremony.

In order to answer the request to come up with a sturdy and secure tea house to handle potentially rough visitors, Kuma decided to make it fleeing, inheriting the original “counter-architectural” spirit of chashitsu. He solved the problems by running from them by giving his chashitsu mobility and agility.

The walls of the “Tee Haus” was made of a double-structured membrane. In order to achieve the clothes-like lightness, he chose a super-thin synthetic fabric called TENARA by Gore-Tex. When it was time to use it, air would be injected in between the membranes to make it a self-sustained structure.

In designing the interior, Kuma again leveraged the original philosophy of the chashitsu. Although it pursued radical smallness, the chashitsu maintained two separate spheres and paths that never mixed. One sphere was a guest room and the other was a mizuya (the preparation room). The guests would use the public entrance found at the front of the building, but the host would enter the guest room via the miyuza. It was as if the chashitsu had two layers. But Kuma felt that, unlike in conventional architecture that used layers to show some hierarchy or order, the guest room-mizuya, and the guest-host relationships in chashitsu swirled. They affected each other, changing their positions, but they never blended together. That’s why the chashitsu looked like a microcosm, Kuma concluded.  So leveraging the flexible structure, he designed two loosely connected but distinct areas inside. It looks like a peanut shell with two asymmetrical bumps. One area is a guest room, and the other is the mizuya (preparation room), but the relationships could be fluid and change as the entire chashitsu was designed ambiguously. 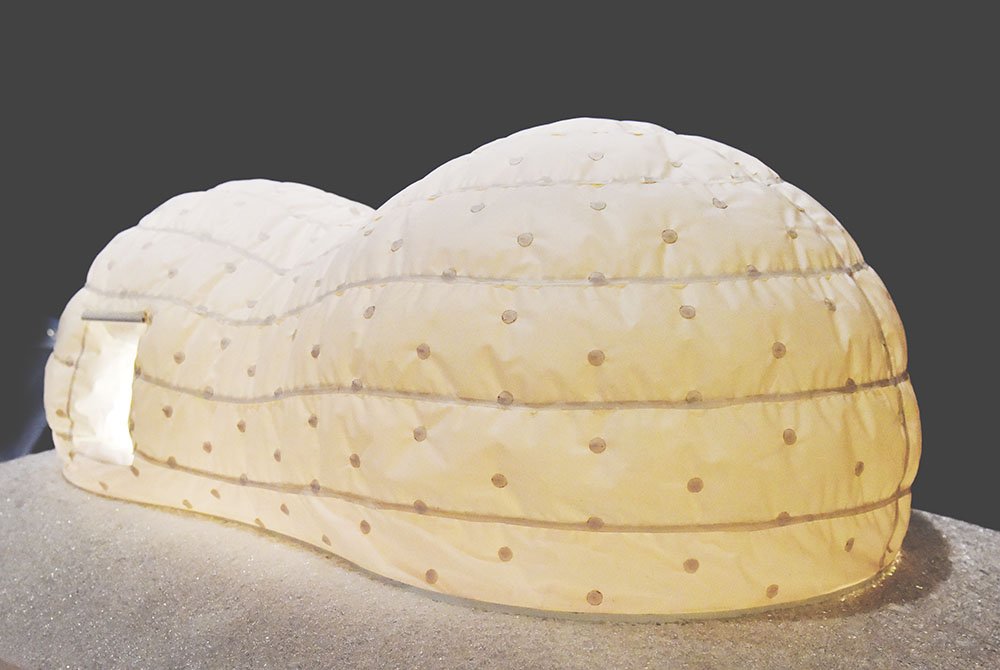 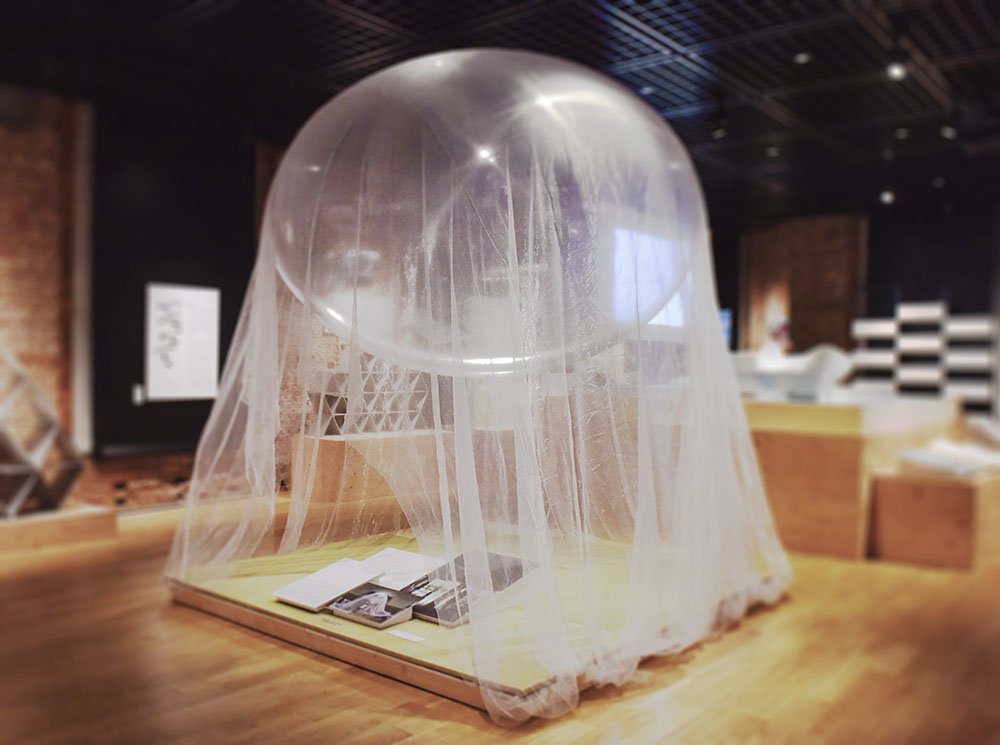 I was increasingly interested in air, says Kuma. He designed “Fuan (Floating Tea House)” in 2007 for the National Building Museum in Washington D.C. Because the budget was limited, this time he pursued drastic mobility: he designed a pavilion that he could pack and carry in a suitcase.

This chashitsu was made of an opaque floating ball which was covered by a super-thin membrane. You inject helium in the the light ball that used polyvinyl chloride as thin as 0.13mm, and cover it with yet another extremely thin material called “Super Organza,” which is as light as 11grams per m².

If a chashitsu was a small rocket ship that carried you to explore your inner universe, it was so appropriate that it actually floated.