In his book “自然な建築: Natural Architecture“ (Iwanami Publishing, 2008),  Kuma describes the worlds’ perception towards Japanese architecture.  “Having worked and presented for so many projects all over the world, I’ve come to realize that people tend to consider Japanese architecture as an alternative to the existing system, and want to see unexplored potential in it to solve many problems the current approach have created.”

Urban development and landscaping in our society is dominated by European modernism, which is based on a long history and vast knowledge, which dates all the way back to the Greek and Roman eras.  It is a very well-established, solid approach.  But many people now think, according to Kuma, that the very solidness of modernism in architecture might have created new issues, such as over-urbanization and environmental destruction.  They are hoping that a more soft subtle approach, like in Japanese architecture, could help alleviate the disadvantages that are associated with the modern approach. 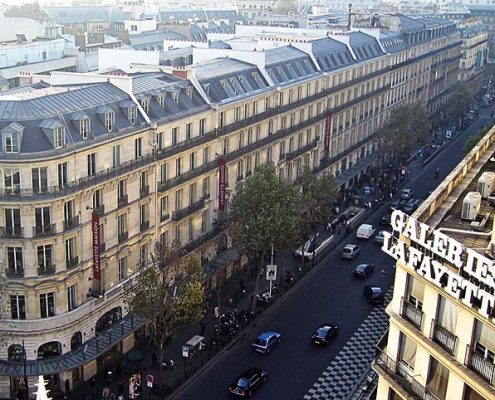 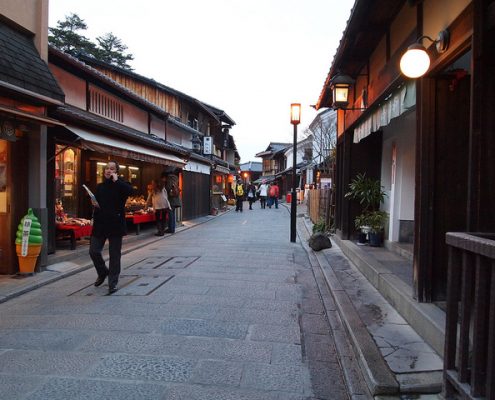 But what does a traditional Japanese architecture, landscaping or urban development approach actually represent? How is it different from the more traditional European style?

Kuma has a very unique point of view.

In a video interview by the  Research Institute for High-Life, Kuma describes the beauty and attractiveness of Tokyo, the most urbanized area in Japan, as having “weak and ambiguous boundaries.”  Especially in an urban setting, where people can fight over property that is situated next to each other; explicit boundaries play critical roles and people respect each other’s entitlements and live together.  Such boundaries are often represented by something fixed and divisible such as walls, fences or barbed wire.  We also have zoning codes that explicitly divide areas, based on what activities you’d be conducting.

But traditional areas of Tokyo do not have such divisible boundaries, says Kuma. “Boundaries are filled with a lot more subtle, delicate vocabularies.”  In Tokyo, people often use alternatives to hard walls, including things like small devices or a little bit of green.

Japanese’s love for ambiguity has a long history, and it has a lot to do with the how they’ve been interacting with nature.  But in the modern world where logic dominates, ambiguity is rather denied as meekness, or an inability to make a concrete decision.  But here, Kuma tries to bring back the beauty of ambiguity, in an architectural context.

He uses Kagurazaka as an example.  Kagurazaka is an old, tradition-rich area in the Shinjuku ward, at the heart of Tokyo.  That’s also where Kuma lives. 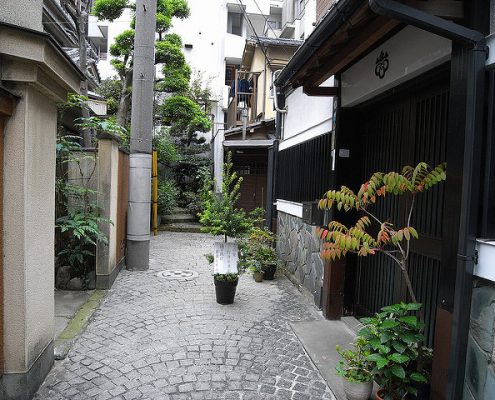 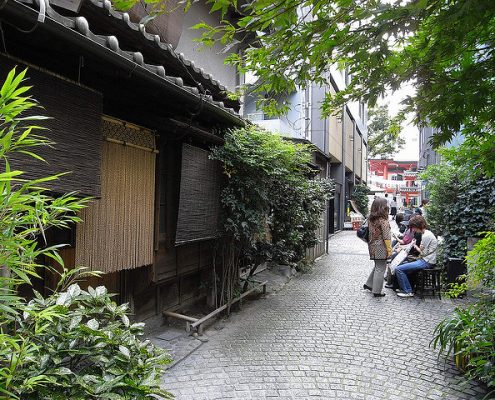 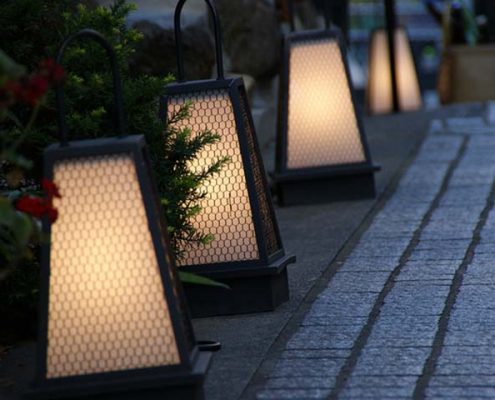 Kaguzrazaka Left and Middle: Image by t.ohashi  Right: Kagurazaka by ume-y all [CC BY 2.0] via Flickr Creative Commons

Kagurazaka, like many other old Tokyo districts, were developed way back when cars weren’t the major method of transportation, and heavy-duty machines weren’t available to modify land.  As a result, narrow, often winding and hilly lanes and allys crisscross to form unique neighborhoods.  (“saka” in “Kagura-zaka” means “slope”)

Kagurazaka has a couple of shrines and temples that serve as landmarks for the neighborhood.  Around them are commercial and residential areas, grandfathered-in small industrial areas, and old hana-machi, which still maintains a bunch of narrow lanes with businesses operating for decades, shops that sell traditional items, chic Japanese (or French) restaurants and so on.  There are also some colleges and other academic institutions.  There is little bit of everything, densely packed, sitting next to each other, all co-mingled, without explicit boundaries.

Compared to urban cities that are “planned” and “designed” to be efficient, organized and defensible, the old districts of Tokyo, such as Kagurazaka, are a bit chaotic, miscellaneous, disorganized and probably inefficient to “manage.” 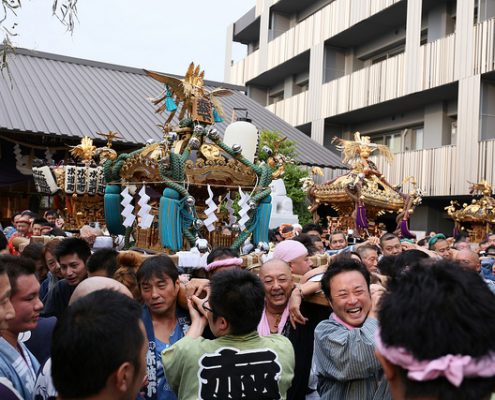 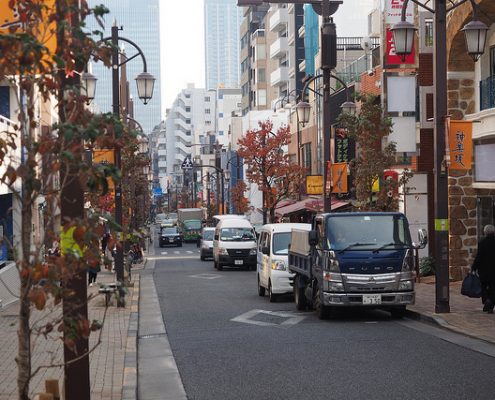 Right: Street in Kagurazaka by othree both [CC BY 2.0] via Flickr Creative Commons

But those are exactly the things that are making each town unique and attractive, says Kuma. Those are the “cores of lives.”  I picture this as a belly button, or an umbilical cord of the community.

But modern urban planning and development vehemently tried to eliminate them, in order to accommodate more people safely and efficiently.  In our society, cities need to be managed easily with explicit accountability.  In order to achieve these goals, authorities encouraged to make urban areas “inorganic,” says Kuma.  Applying logical and architectural approaches, cities have become a place with explicitly divided parcels or cells, made of hard materials, such as iron and concrete.  And they are surrounded by hard walls in order to shut down any unwanted invasion, including contacts from nature.

You cannot expect any organic reactions in an inorganic environment.  Of course many people, actually a lot of people, live in modern cities, but still, you can expect very little pollination, hybridization, collision or serendipity to be happening there.

We are already surrounded by a massive modern urban system.  It’s becoming more and more critical to think though how we can transform this inorganic environment back to an organic one, and it’s more important than planning new developments, says Kuma.

Look at the existing developments, he says.  Most developments start deteriorating after a couple of decades.  They will die if we don’t intervene.  But the way we “intervene” is not through demolition and reconstruction, according to Kuma.  Take a close look at them, and see if you can find any spots where you can plant “fungus.”  “Fungus” could be small changes, renovations, devices or opportunities where people, or people and nature, could organically communicate, interact and start brewing something together.  In other words, we should plant fungus in communities to encourage “fermentation,” as Kuma puts it.

Harmonica Yokocho in Kichijoji, Tokyo. Those small alleys, packed with small restaurants, bars and shops, used be everywhere in Japan, several decades ago. But as the cities became modernized, they started to disappear because they couldn’t pass zoning/building requirements.  They have been replaced by modern, massive “inorganic” developments, which made all towns look the same. Kichijoji, one of the most popular towns in Tokyo for young people, managed to maintain Harmonica Yokocho, which attracts quite a few visitors. Kuma says that it’s important to use our wisdom to keep those “fungus” in our cities, by making/applying regulations resiliently.


Fermentation is a mysterious process.  You will never know exactly how things will play out until it’s done. It’s affected by many factors such as types of fungus, climate, ingredients or environment.  But that’s exactly why fermentation is interesting, and yummy.  We all know how many different flavors and styles beer can come in!  If a community could draw enough organic elements and start fermenting on its own, it will be exciting for people who live in it.  It will also attract people from outside, who want to come in and check out what’s going on.

What Kuma says is that if you can plant the right fungus at the right spots, they will start fermenting on their own. And in this century, that’s far more important for our happiness, than to continue building modern, massive and inorganic environments.

In addition to the Akaghi Shrine and Park Court (in above section), Kuma has designed some more projects in his local Kagurazaka. La Kagu is a commercial complex, opened in 2014. Kuma decided to renovate an old warehouse of a major publishing house in Japan, Shincho-sha. He says he focused on maintaining the rich history of Kagurazaka, and leveraging the joy of strolling around when designing La Kagu.

All quotes above were translated by Mihoyo Fuji.

Discover the aesthetics of “less is more”
Scroll to top