Japanese food company Nissin was founded by visionary entrepreneur Momofuku Ando (1910-2007) who single-handedly invented its signature product “Cup Noodles” in his small shed during the post WWII social turmoil and food shortages. Launched in 1958, the product became a big hit in Japan, and soon after it started an “instant ramen” frenzy in many parts of the world. Ando may be one of the few business leaders who helped shape Japan’s post-war economy by offering high quality products at reasonable prices that were supported by hard-working people..

In Japan today, Nissin is a beloved company that offers popular instant foods among other products AND entertains people with its humorous, witty marketing and communication campaigns. The combination of trusted product quality and the playfulness (which reflects Ando’s innovative spirit) attracts consumers, and especially young people: Nissin is one of the most popular companies among Japanese college students when they start looking for a job. And it is Kashiwa Sato who has been behind Nissin’s branding and marketing, creating so many “viral” moments over the last decade or so. Ever since he supervised the establishment of the Nissin Cup Noodles Museum in Kanagawa, Japan in 2011 – which remains to be a very popular destination for families – Sato has been involved in numerous projects that have cemented Nissin as one of people’s favorited brands.

When the Cup Noodles celebrated its 60th anniversary in 2018, Sato proposed that Nissin compile its 60 years chronicle using “manga” as a medium. That was already a bold idea for a food company but Sato went on to appoint a relatively unknown manga artist, Takashi Okazaki, who became popular in the US with “Afro Samurai,” a rather violent Black samurai revenge story that transplanted medieval samurai to an apocalyptic, cyberpunk world. Okazaki wrote “Samurai Noodles” for Nissin starring company founder Momofuku Ando as a “hard-boiled” samurai. Amid the post-WWII food shortage, Ando the samurai stoically works day and night to develop a noodle product affordable and accessible for hungry people. When he finally commercializes “Cup Noodles” after overcoming many hurdles, he sails into a global market to pursue his mission to deliver good food products that can make people happy and bring peace. It would have been an ordinary feel-good corporate success story if it had been written in the traditional way, but when Sato added graphic novel/comic book-style exaggeration, “Samurai Noodle” also became a piece of entertainment that made people chuckle or smirk. Sato also didn’t forget to send the most important message: Nissin is committed to remain the “originator” of affordable food products that make people happy. 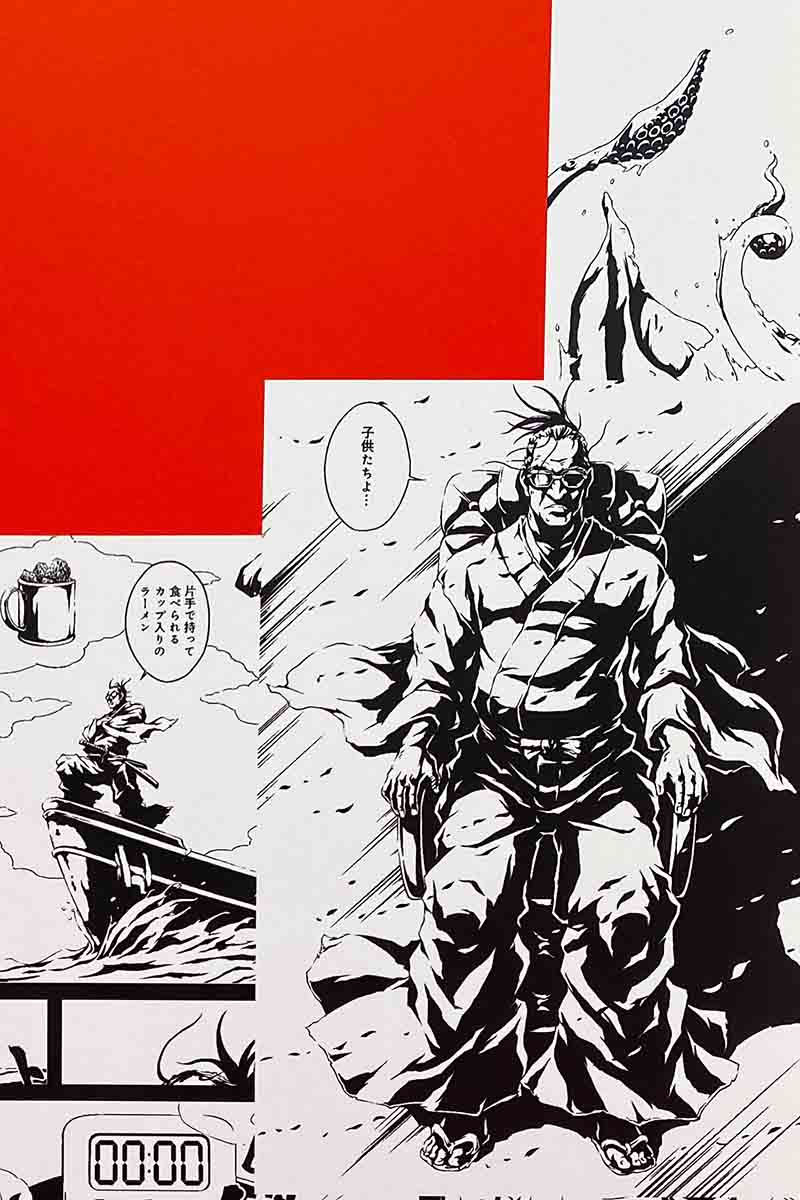 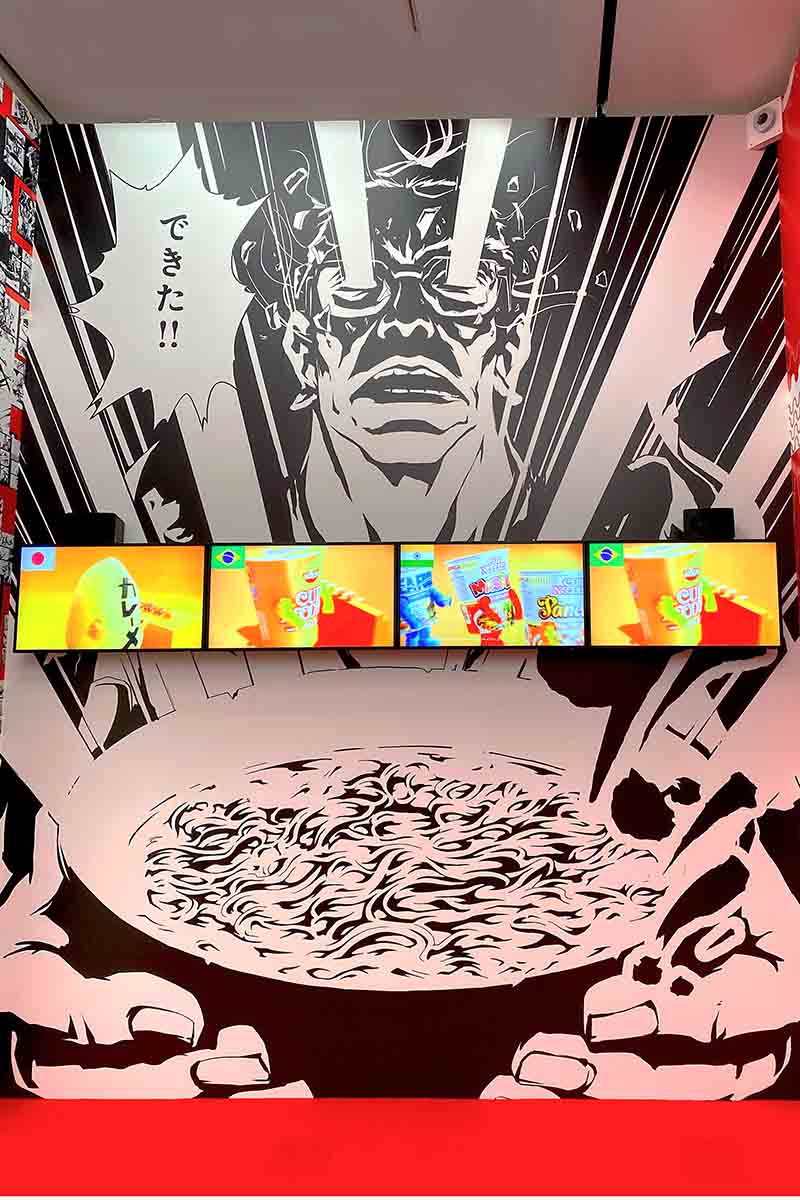 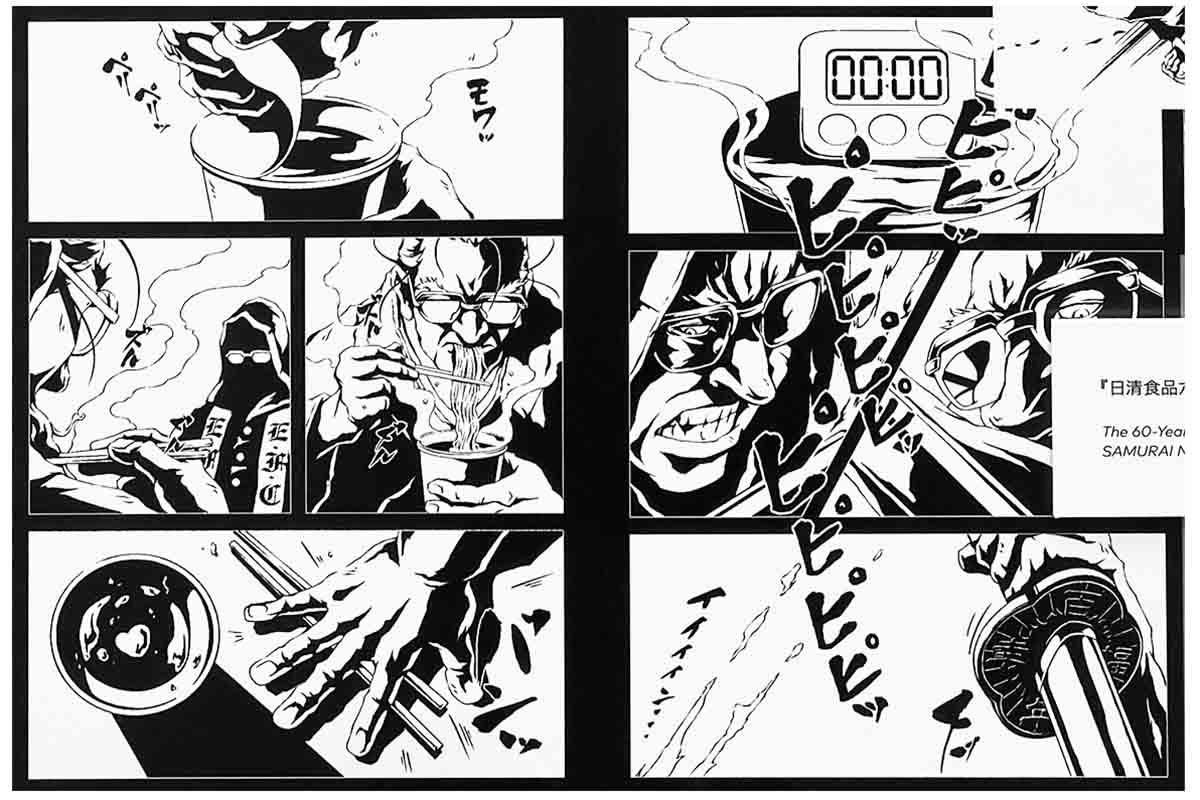 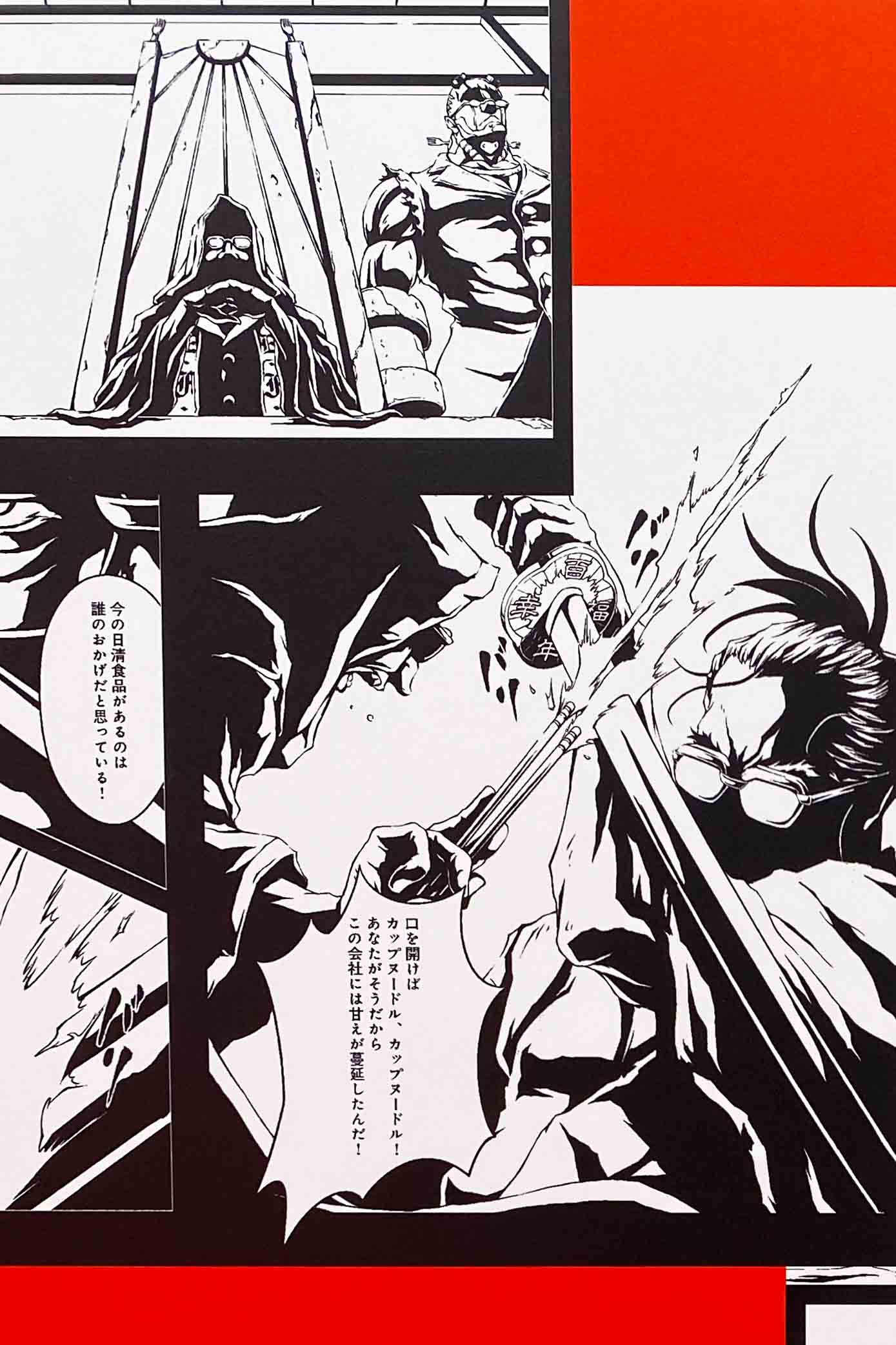 Curry is believed to have been brought to Japan via England in the late 19th century. Apparently, the Japanese loved it so much that it is now one of most popular meals in Japan, although it has grown to be very different from the original Indian-style curry. Japanese curry has stew-like ingredients and texture and is served over short-grain rice. Nissin attempted to market “cup curry rice” twice in a hope to make it the next cup noodles, but that didn’t go well. As Nissin used the same method as the Cup Noodles, consumers were supposed to pour hot water on dried ingredients and rice, mix them and wait for 5 minutes. Unfortunately, the result was a thick, porridge-like mixture, not exactly the curry on rice that the customers expected.

That’s when Sato stepped in and turned things around. He took charge of the re-naming, the packaging design and the marketing of the instant curry and rice. He relied heavily on social media to appeal to his target customers, young people (predominantly male) between 15 and 35 years old. His main focus was to persuade his customers to appreciate the “instant” version of curry and rice that, even though it was inherently different from its original, was good in its own right. He wanted people who tried it to think, “OK, this is NOT curry and rice. I don’t know what the heck it is, but it’s good!” This became the concept for the new product and that’s how it got its new name, “curry-meshi”. Meshi is a slang-ish word for rice used mostly by men. The new name, which is brief and catchy, was able to convey the message that 1) it was different from curry and rice, 2) it contained flavors (and a portion size) attractive to young men, and 3) it was weird and funny. He created the commercials, marketing materials along those lines, which received mixed reactions internally (Is a food company supposed to rely on a quirky, almost silly marketing approach?) But consumers loved it. The commercials went viral and sales increased 17 fold after Sato’s intervention. Sato’s strength is his ability to focus on the most important message even when it initially looks too unconventional or weird, and let that message drip into the culture. Nissin really embraced Sato’s approach; they started to make quick decisions and take bold steps. So far, it seems to be working as consumers are on board. 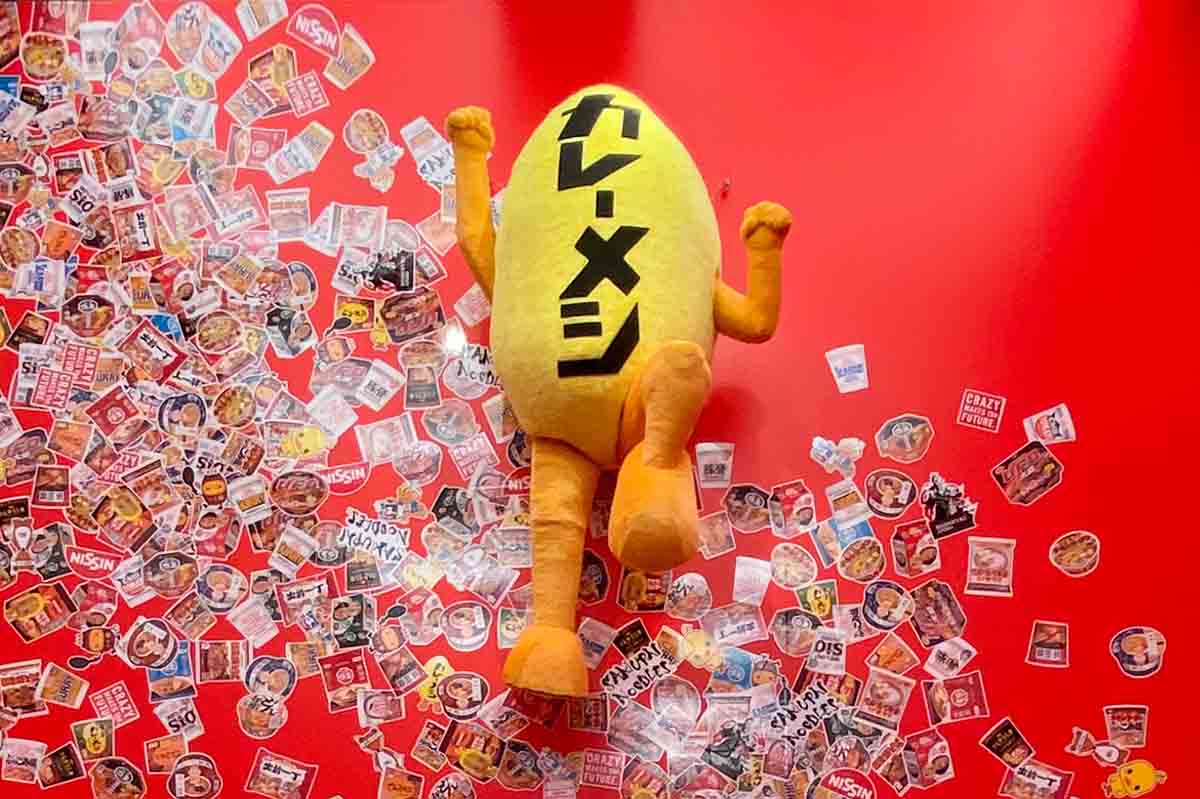