Back to The Japanese House main page

“Machiya” is a traditional Japanese townhouse often found in busy commercial districts. Whereas machiya already existed in the Middle Ages, it refined its design and functionality during the Edo era (17th~19th century), when merchants emerged as a social power by accumulating wealth and helping grow the commercial and service sector.

In order to maximize the number of activities that could happen in busy and densely populated areas, people adapted extreme “mixed use” approach: machiya is a narrow, often two-story house that is a shop and residential units at the same time.  A shop is located at its front end that faces the street, and residential units for a family who runs a shop are at its rear end. They are built next each other applying the same design format. Whereas each store is unique, a collection of machiya on a street delivers harmonious, coordinated atmosphere from design aesthetics perspective.

Although machiya contributed to help shape vibrant commercial districts throughout Japan for centuries, people started to see it as outdated and old-fashioned as time went by, primarily because it was wooden, small and did not fit modern life style.  It was not very compatible with the modern community planning approach either.  As a result, many of the old machiya were demolished over the last several decades. It almost seemed to be heading toward extinction.

But now is the time to re-discover the greatness of machiya, says Yoshiyaru Tsukamoto of Atlier Bow-Wow, who co-supervised “The Japanese House” exhibit. 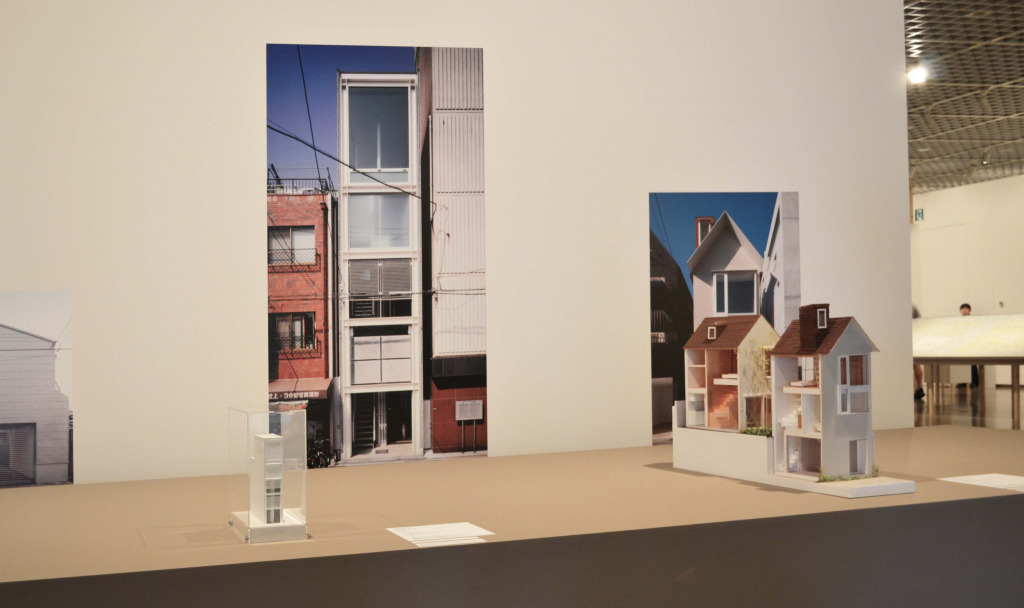 For the purpose of the exhibit, he defines machiya as a house that has 1) narrow width and entrance, but longer depth, 2) lattice doors that softly set the boundaries between the street and the shop, 3) residential units at the rear end, and 4) narrow patios that connect the shop and residential area in order to facilitate air circulation and to maximize the amount of incoming sunlight. Securing the pathways for light and air is critical because the machiya are built very close to each other.

Machiya didn’t appeal to people in a modern era who sought a larger, more private, sunlight-abundant houses with parking spaces. Machiya also had difficulties complying with the fire code because they were made of wood with few evacuation routes and were simply replaced with concrete buildings.

By losing machiya, points out Tsukamoto, we also lost cultural codes of conduct associated with machiya style of living. For example, living in machiya meant realizing a life style in which working and living were integrated, and maintaining an individual house contributed to collective aesthetics of the community. There was abundant wisdom accumulated in machiya.

Today, many people are forced live in small parcels again for various reasons, and increasing numbers of people are interested in integrating work and life. We could learn a lot from machiya by leveraging the beauty and wisdom it assembled over many centuries. 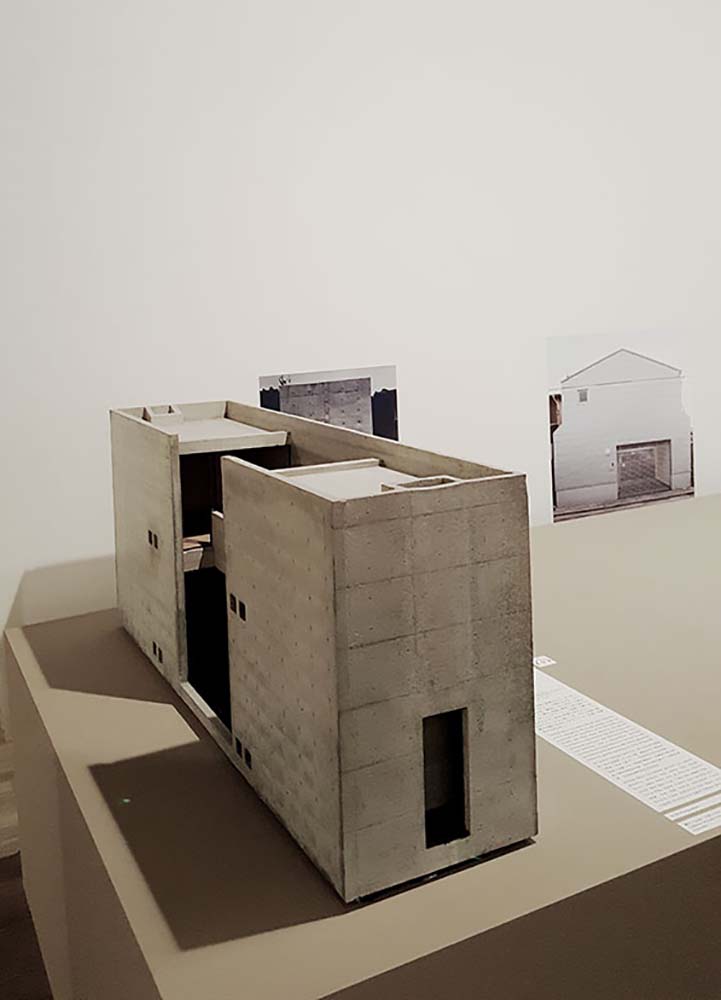 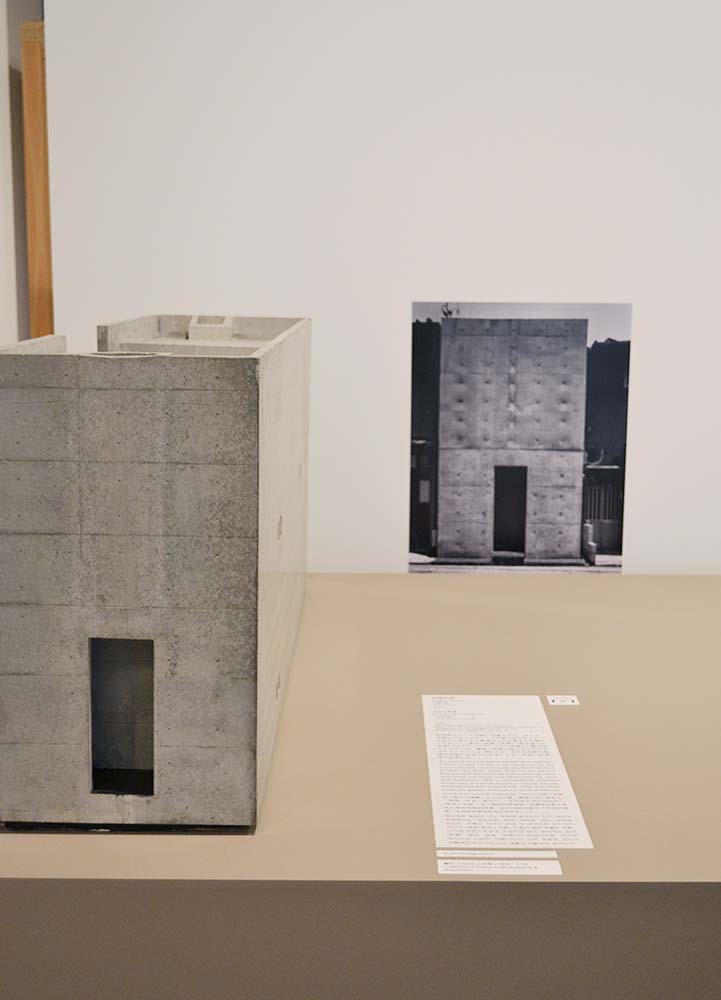 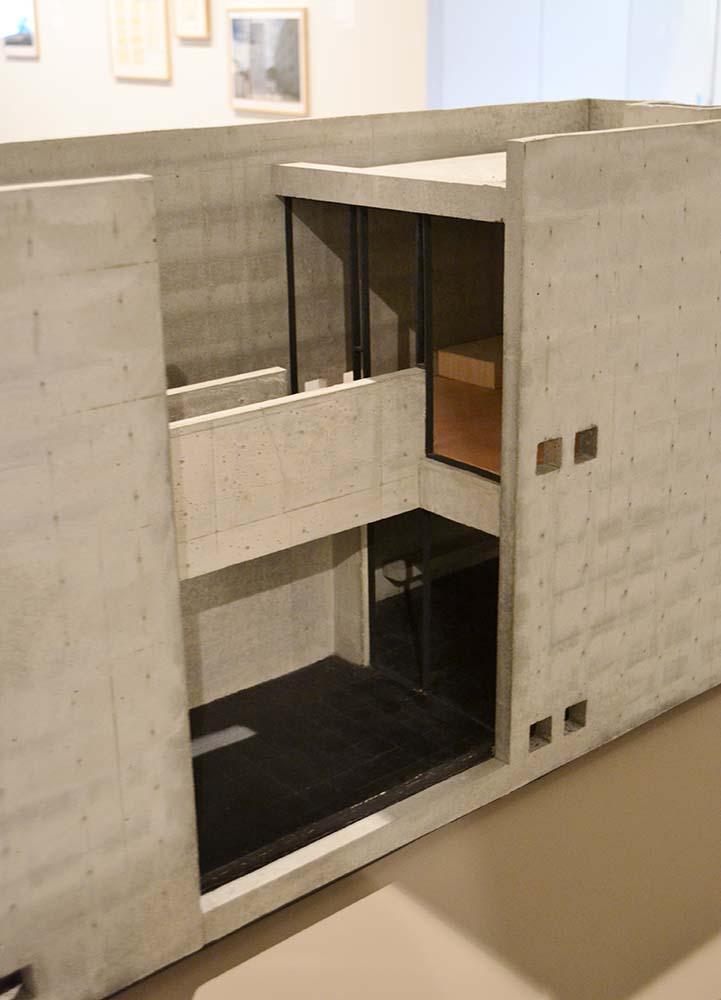 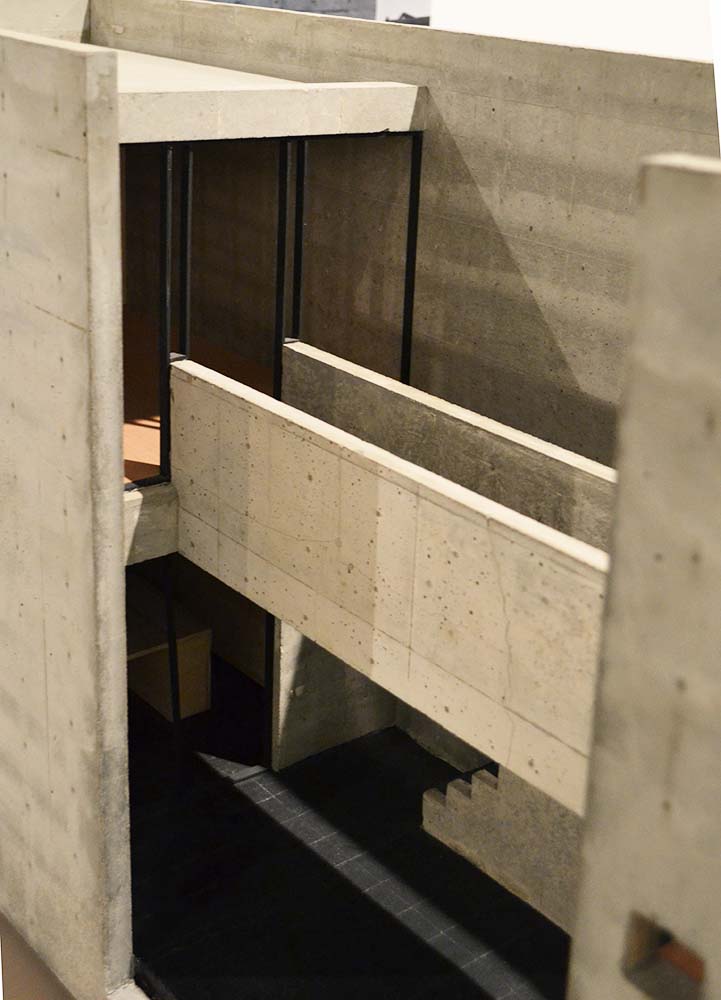 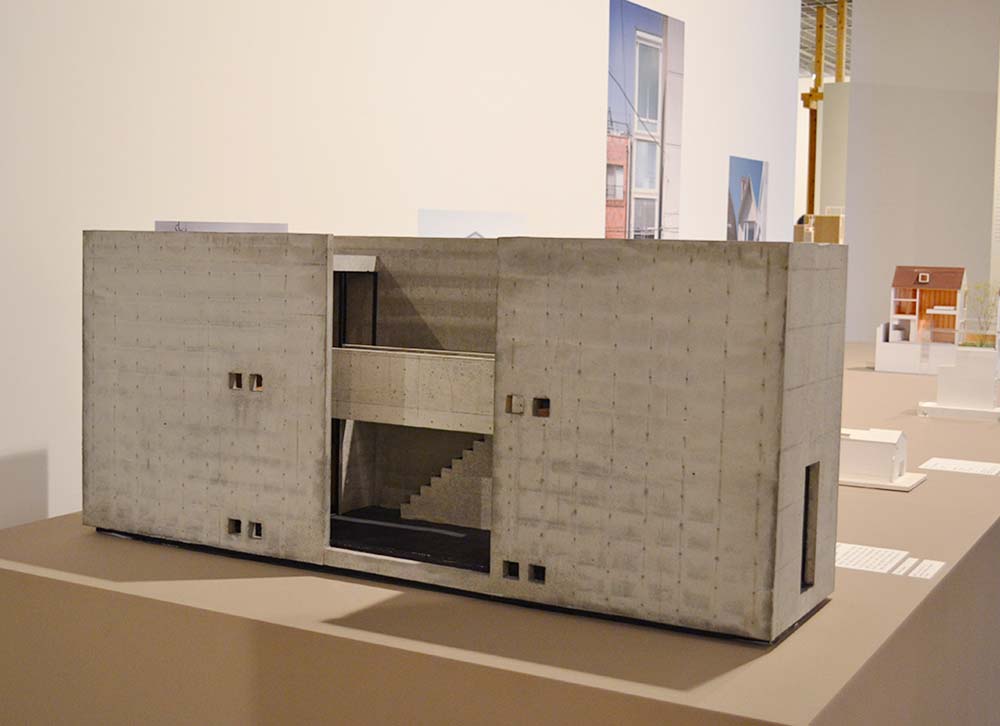 The “Row House in Sumiyoshi” is one of the most famous pieces of architecture by Tadao Ando, the Pritzker award-laureate who is well known for his unique use of concrete and minimalist structures. Built in 1979 with a budget of $100,000, the “Row House in Sumiyoshi” replaced an old machiya that was sitting on a parcel of land that measured only 12″ x 48″. Ando divided it into three parts, and designated the middle one as a patio with no roof. Natural light was designed to come in from the patio, so he did not install any windows in the walls. And because of the patio that divided the entire living space into chunks, the owner had to cross the patio to use the bathroom when he was in the bedroom.

It was a bold design that posed a fundamental question: what do you value most in your living environment? Ando refused to make a compromise just to secure comfort and functionality. Instead he pursued artistic abstraction. Despite its physical smallness, he attempted to let microcosms emerge in which nature and abundance was condensed.

To our surprise, it seems that the owner still lives in the house, dealing with its unique inconvenience. While Ando’s approach reminds me of the philosophy of Zen minimalism,  the owner of the “Row House in Sumiyoshi” may have learned to cope with challenges with calmness of a Zen priest. 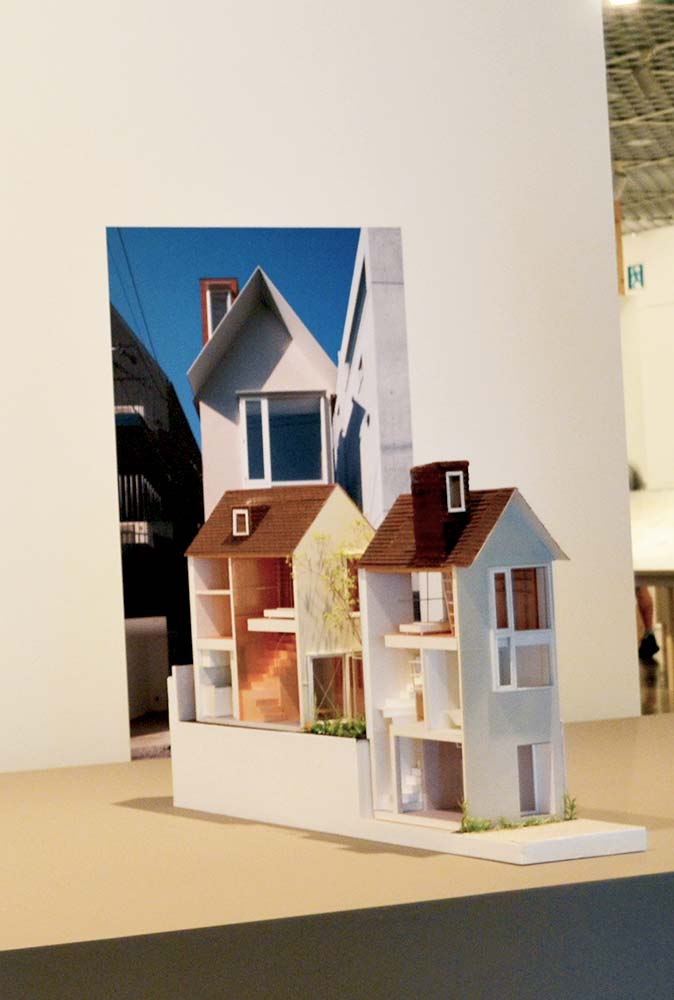 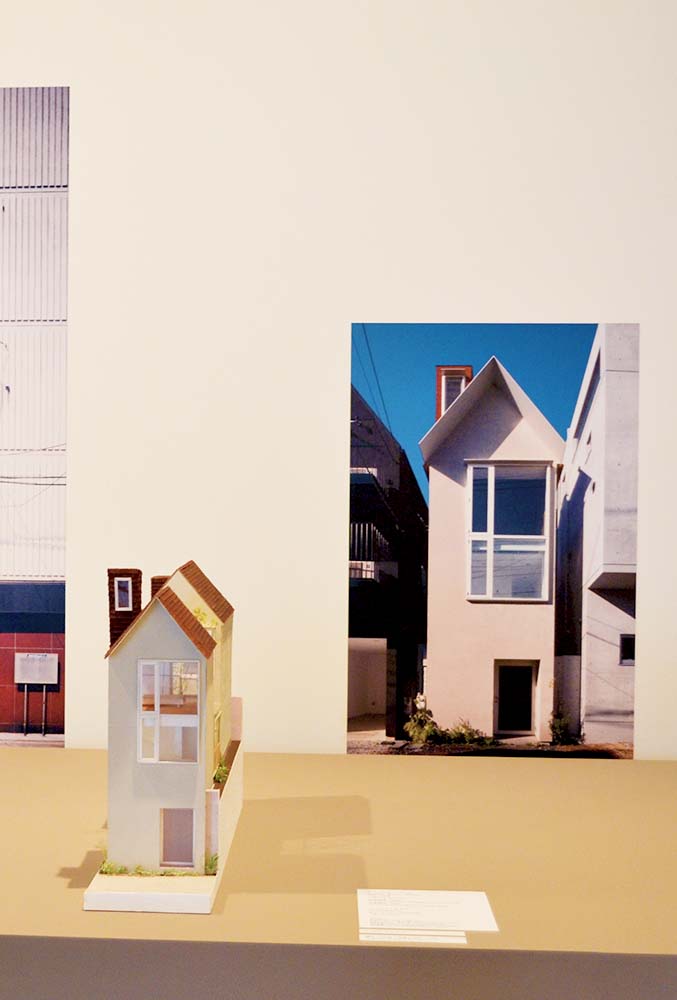 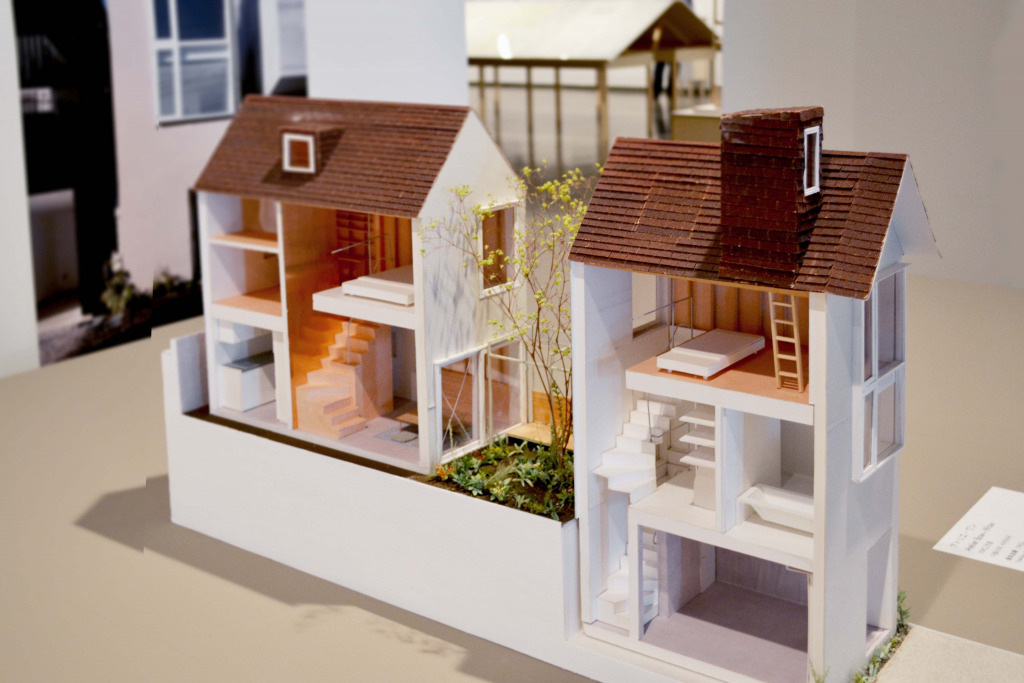 The Machiya is inherently a tiny house. Just like Ando’s concrete machiya, “Split Machiya,” designed by Atelier Bow-Wow, sits on a lot as small as 696 square feet. And just like concrete machiya, “Split Machiya” inserts a patio in the middle of the building, dividing the entire space into three. But even though you have to give up some living space in order to create the patio, the sense of spatial expansion achieved by it is more than worthwhile. Since it’s difficult to feel it by looking at the model, watch this video.

It is also notable that the stairs play a significant role in a tiny house, because they naturally focus on vertical potential, rather than the horizontal, which quickly hits the boundaries. “Split Machiya” has uniquely designed stairs and ladders, which emphasize the vector to rise upward.

House in Nihonbashi by Waro Kishi (1992) 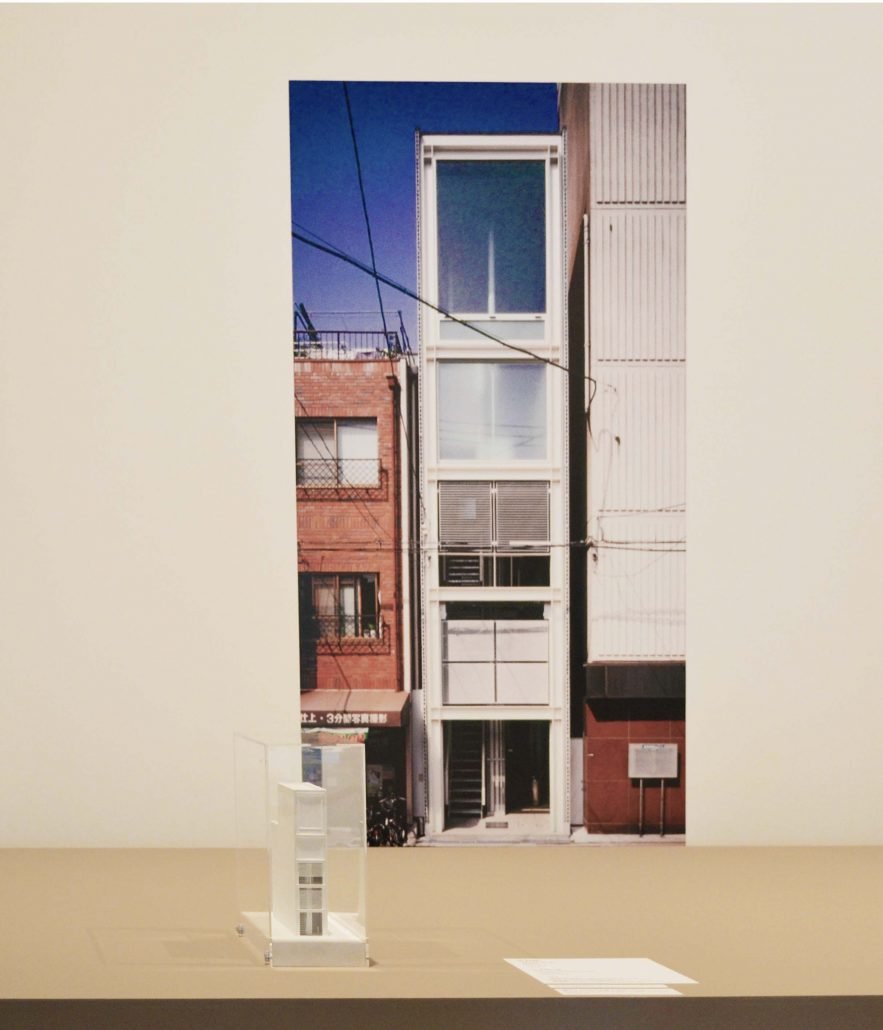 This house is located in Nihonbashi, Osaka, a very busy commercial district. The piece of land is only 8.2 feet wide and 42.7 feed deep, and the actual widths of the building is 7.2 feet!

It has four stories: the ground floor has an office and a machine room, the second floor is a Japanese room (usually an all-purpose room furnished with tatami mattresses), the third floor is a bedroom, and the top floor is a dining room that has a ceiling as high as 20 feet. It also has an outdoor patio.

The works space (first floor) and the living space (upper stories) are connected with the staircases that face the street. Whereas traditional machiya expands toward the rear end, this house goes high.

House in Daita by Kazunari Sakamoto (1976) 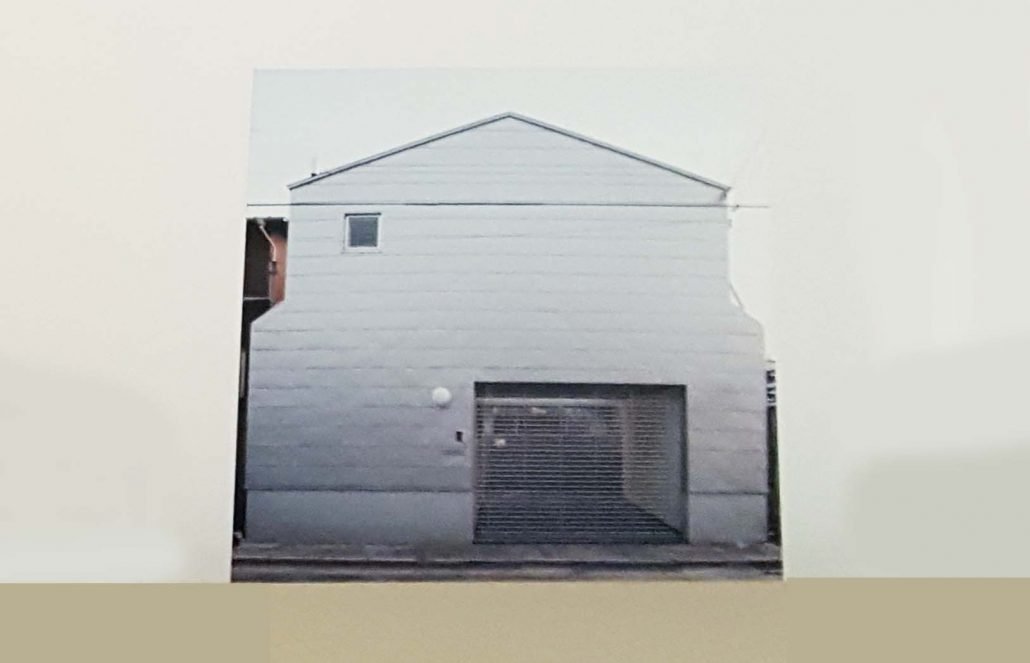 Unlike other modern machiya, Kazunari Sakamoto’s “House in Daita” is not quite narrow. But it still leverages some key features of machiya. For example, the parking space with clear view shutters plays a role of a shop facade of a machiya that is furnished with lattice doors.  When a building stands right next to the street (which is the case with both machiya and the “House in Daita”), it functions as ambiguous buffers that alleviate the shock of the direct collision between a private house and public infrastructure.

The entrance leads to hallways, then to a kitchen, and then eventually to the trails connected to the backyard. Sakamoto called the parking area and patio “exterior rooms.” In his plan, the entire sequence, both interior and exterior, collectively constituted a consistent story.

Back to The Japanese House main page
More on Japanese architecture