Curious perspective of Japandi: the many faces of Japanese-Scandinavian crossover

”Japandi” is an emerging design trend that blends simple, linear, rustic and warm Scandinavian style with timeless and elegant “wabi-sabi,” a traditional Japanese aesthetic concept. People are seeing “surprisingly” similar design philosophy in the two, despite the fact that they are far, far apart from each other.

But actually, it’s not surprising at all. At least Japanese have had natural affinity toward Scandinavian for quite some time. It’s been everywhere, from literature, cartoons, films, music, and fashion to architecture. Why? It’s probably because something in their DNA resonates with Scandinavian way of life – which makes a lot of sense if you look at the map.

(NOTE: I am including Finland as part of “Scandinavia” for the sake of this discussion due to Japanese people’s love for Finnish culture.)

The Scandinavian Peninsula and Japanese Archipelago exhibit similar geographical characteristics: they are reasonably close/apart from the mainland Europe/China, which have traditionally been the world center of politics, economy and art. They seem to have been significant factors that helped the two regions develop their respective culture.

The mainland Europe ~ Mesopotamia ~ China have been world centers of politics, economy and art for thousands of years. According to Jared Diamond, who wrote the Pulitzer-award winning book “Guns, Germs and Steel,” the geographical characteristics and environmental settings of the Eurasian continent – especially the long latitudinal connectivity- made those regions populous and dominant. Different groups have competed fiercely on the continent, and winners would emerge as powerful world leaders. If the most imminent threat help shape culture, it was incessant invasions from other groups for mainlanders. Naturally, their cultures became competitive, advancing and logical/scientific that fully leveraged people’s abilities.

Meanwhile, the Scandinavian Peninsula and the Japanese Archipelago are both located at the margin of the mainland Europe and China, physically separated by the seas. While they were reasonably close to seek intellectual inspiration from strong mainland cultures, they were also distant from them by a hair to avoid the fierce competition that occurred at the heart of the mainland. For Scandinavians and Japanese, major threats that shaped their respective culture remained to be the force of nature, which was overwhelming, mesmerizing and uncontrollable, not just beautiful and blessing. Respect, fear and awe toward nature has been the foundation of their aesthetics. Interesting facts: the Renaissance and “wabi-sabi,” the essential concept of the Japandi, occurred almost at the same time. The first celebrated humans and the latter celebrated nature.

The easy way to feel how the respect/fear for nature became the foundation of creative inspiration to look at the two iconic cartoon characters overwhelmingly loved in the two regions: Moomin, written by Tove Jansson – a Swedish-speaking Fin author/illustrator, and Totoro, a character in the animation film “My Neighbor Totoro” directed by Hayao Miyazaki/Studio Ghibli. Both were basically targeted for children, but have become the classic loved by wide generations. You could think of them as the Scandinavian/Japanese version of Winnie the Pooh or Charlie Brown. Moomin has been widely loved by Japanese, especially after it was adapted as a cartoon TV series in the 70’s. It would be safe to say that every Japanese child grows up reading or watching Moomin. 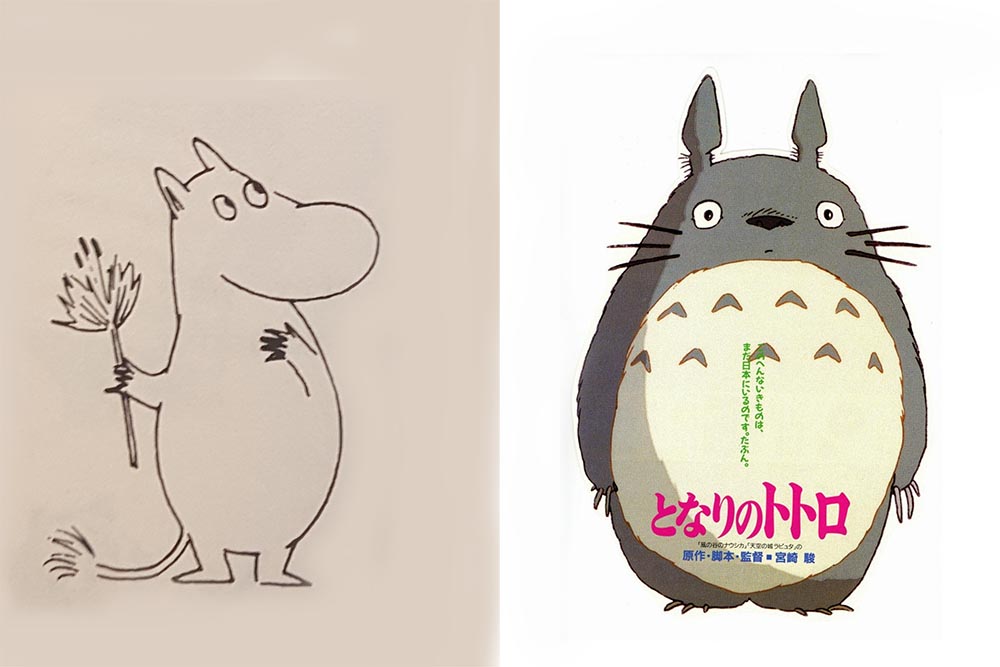 If you’ve never seen them before, what was your impression? Curvy and cuddly? Who do you think they are? Symbolically, they are both trolls. Trolls are free spirits that can travel back and forth between deep nature and humans’ world to connect the two. Naturally, half of the qualities Moomin and Totoro exhibit belongs to our world (e.g. they look cute or humorous by our standard), but the other half belongs to deep nature – they behave unpredictably or illogically because they don’t abide by the order people created. Those supernatural spirits were common in ancient/animistic cultures because people needed them as a bridge to access otherwise untouchable side of nature – deep, ferocious, sacred and most beautiful. They were the critical catalyst to unlock unbound imagination and inspiration.

It’s this ambivalence represented by trolls that constitutes aesthetics in Japanese/Scandinavian cultures. Beauty includes everything humans pursue – order, structure or stability (i.e. predictably pleasant appearances) – but it also includes the real face of nature – ambiguity, darkness, elusiveness, imperfection or indefinabilty – all the things nature is about, regardless of how humans want it to be. 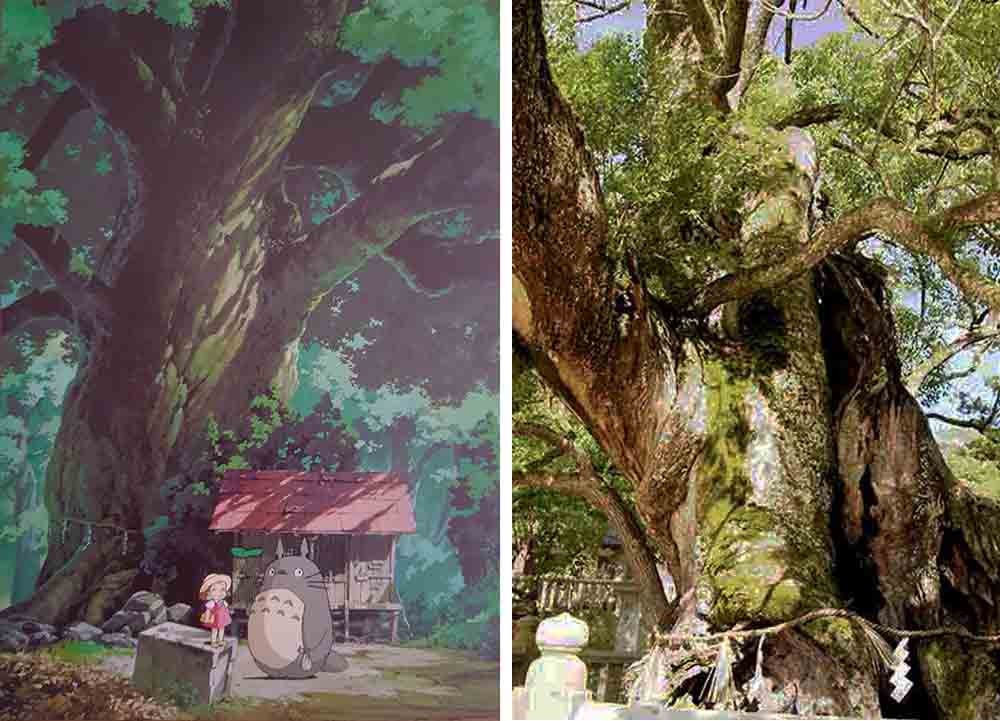 Left: Mei, a little girl who is one of the main characters in the movie “My Neighbor Totoro,” encounters Totoro. Only certain children (no adults) can see Totoro.
Right: A sacred tree (believed to be 2 ~ 3,000 years old) consecrated at Oyamazumi Shrine, Omishima, Ehime.
Totoro lives in an old, large tree which is worshiped by local residents. Some large trees that survived for thousands of years have actually been worshiped by Japanese: they believed that those trees hosted deities.

Left: the map of Moominvalley drawn by Tove Jansson
Right: Snufkin, the best friend of Moomintroll
Moomintrolls live in Moominvalley deep in nature, which is surrounded by the Lonely Mountains, a high mountain range feared by many as an unknown and slightly scary space inhabited by the ghost-like creature. Moomin’s best friend is Snufkin, a vagabond and musician who often goes philosophical, leave Zen riddle-like messages and casually wanders off without letting Moomin know when to come back. Japanese love Snufkin, who is like Zen priest-wanderer-artists that left beautiful artworks in the Middle Age Japan. There are definitely many wabi-sabi elements in Moomin.

Tove Jansson was a magnificent artist. Her drawings in the original Moomin stories apply the art of subtraction and simplification like how Charlie Shultz did in Charlie Brown that let untreated, fundamental beauty of our world. Both nature and characters are often affably eerie.

Totoro and Moomin do great job of showing the beauty of living in harmony with nature, which can only be achieved when humans maintain modesty and decency to leave good amount of space for other creatures/elements to stay true to themselves. Such an attitude requires reservation and subtractions to create margins, blur boundaries, and leave things undefinable, rather than making everything explicit and eloquently explained.

In art, it can mean that you can intentionally slow down or drop some seemingly critical elements, instead of going full steam ahead and fill the entire presentation with your creative force (e.g. sing at the top of your lung). The effects: you create curious voids for audience to freely interpret/entertain them.  You can feel them in music.

Take The Cardigans, a Swedish alternative rock band that was popular in the 90’s. As much as they garnered worldwide attention, they became disproportionately popular in Japan, supported by avid music/fashion fans. If you don’t know The Cardigans, here’s some review from the Pitchfork on their early works:

Peter Svensson and Magnus Sveningsson formed The Cardigans back in 1993, enlisting untrained vocalist Nina Persson after playing hardcore for years– inspired by a joint passion for heavy-metal music. Long Gone Before Daylight shows that classic rock runs in their blood, despite an inauguration of kitschy indie releases including 1995’s acclaimed Life.

Two things stand out: 1) vocalist Nina Persson was untrained when they started The Cardigans. 2) Their music roots were all over, from heavy-metal, rock, lounge music to jazz, making it difficult to categorize their music. The output was stylishly anti-professional, anti-mainstream “ironic” pop icon that left a lot of rooms for fans to interpret their coolness in their way. This ambivalence must have excited Japanese. It was so much so that many Japanese musicians flocked to The Cardigans’ producer Tore Johansson and produced songs and albums full of ambivalent Scandinavian flavors. If you are curious, the musicians include: Bonnie Pink, Hideki Kaji, Tomoyo Harada, Ayano Tsuji, Le Couple.


Left: Japanese were enthusiastic about The Cardigans.
Right: One of the Japanese musicians who was produced by Tore Johansson was Kaji Hideki: You may find his music video for “Mr.Sweden” curious because it comically and affectionately emphasizes Japanese perception toward Sweden.
Baby Portable Rock by Pizzicato Five.
Although not a Tore Johansson product, Pizzicato Five was one of the most popular Japanese bands among music fans that also loved The Cardigans/Tore Johansson production in the 90’s. You may find pleasing color schemes and fashion that blends Japanese and Scandinavian style via Nouvelle Vague-ish France and De Stijl-ish Netherlands.

Clearly, Scandinavian flavors are almost at the opposite end of Hollywood-style mainstream-ism. They are rather low-key and ready to shrug off flashy things that are too much, and that’s what Japanese do also. Not only in music, there are Scandinavian influences in movies. “かもめ食堂 (Kamome Shokudo, or Kamome Restaurant)”  is an independent Japanese film which was produced in 2006 with relatively low budget but ended up earning more than $5 million. It was a story about Japanese women who try to run a restaurant in Helsinki, Finland. It was low-key, mellow and casually philosophical. You may find great inspiration on how you blend Scandinavian and Japanese aesthetics in interior design.

Though the film does not feature photogenic actresses, you might have noticed how agreeably the ladies were dressed. The fashion was simple – nothing was flashy nor too much – but the clothes/accessories were well taken care of at details, color schemes were beautiful as they leveraged Scandinavian design patterns.

Speaking of which, Finnish design house marikekko is also very popular in Japan.