They are good because explicit, indisputable definitions accelerate fair and efficient distribution and allocation of resources.  Without clear definitions, any contract will become ineffective, and we will be thrown into chaotic dispute over ownership, on just about anything.

If that’s the case, ambiguity is the enemy of a modern economy and strong leadership, which have been driving dramatic advancement in the modern society.  Ambiguity is bad because it blurs boundaries, creates uncertainties, and puts you in a vulnerable position.

But then, ambiguity is actually one of the signature characteristics of Japanese aesthetics. 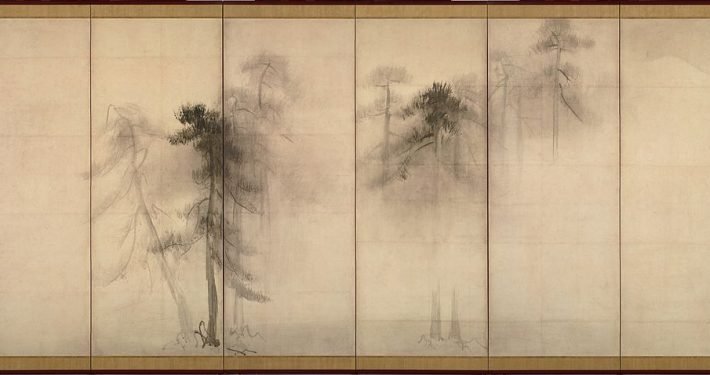 Ambiguity blurs boundaries. When physical properties become blurred, there emerges a blank space that cannot be defined as A or B.  It is called “yohaku” in Japanese aesthetics.  Yohaku means space intentionally left blank, or unoccupied.

The above picture, by Tohaku Hasegawa (1539-1610), is one of the most recognized ink paintings in Japanese history, which exhibits enormous yohaku.  Tohaku lived in the era when other prominent Zen-inspired arts, such as ikebana (flower arrangement) or tea ceremony, cemented their foundations.  He was influenced by Sesshu, a highly acclaimed Zen painter, and had Sen no Rikyu (father of wabi-cha, or wabi tea ceremony) as one of his patrons.  So, Zen style “less is more” aesthetics are definitely in his work.

Titled “Shorinzu (pine trees),” this painting is actually done on a pair of byobu (folding screen panels).  This is the left panel.  Shorinzu is striking in multiple ways: first, it only captures pine trees – a single object – on such a large canvas.  There isn’t even a bird or clouds. The focus is solely on pine trees, and everything else is in ambiguities surrounding pine trees – only as potentials.  It is a bit like ikebana.

We are first drawn to a couple of trees in front, painted using savage tone with thick black ink. We can almost feel the sharpness of the needles.  Then the impression quickly dissolves into surrounding vagueness, because other trees are painted using a much lighter tone and blurred profile.  In Japan, pine tree woods are often found along the coast lines.  Since weather changes quickly by the coast, this painting suggests that it might have captured the moment early in the morning, when fog/mist was covering the trees. Or may be it was sprinkling rain.  In my memory, pine woods by the coast is always associated with a strong wind.  I can almost hear the wind blowing against the trees: a bit sad, solemn and solitary.  But it only emphasizes the boundless resilience of nature.

Abundant space, vagueness and blur, placed surrounding savage trees, unleashes our imagination. It makes us feel, think, and become absorbed in the vast beauty of nature.

Haiku, the world’s shortest poem, is also an art of yohaku.  Instead of using many words to describe the beauty of nature (haiku traditionally limits its theme to nature), haiku only allows the writer to use 17 syllables.  Around 17 syllables emerge enormous yohaku.  Creators and readers unleash their imagination to fill the yohaku, letting unbound beauty emerge.

Similar to yohaku, 間(ma) is also a critical Japanese aesthetic that embraces ambiguity. Ma is carefully created intervals between structural parts.  Whereas yohaku typically implies blank on a paper, or space, “ma” can also be temporal.  Ma is often found in Japanese traditional music or theater.

Nou established its foundation in the 14th century by Kan-ami and Zeami, a father and a son, who incorporated another Japanese aesthetics of ambiguity, “yugen,” in Nou.  Yugen is rather difficult to define, but it means something between our world and the other world, life and death, artificial and natural, logical and chaotic, existence and non-existence, real and spiritual, or definable and undefinable.  Yugen is something you cannot clearly see or describe, but something you feel, which is unfathomable.

In order to express such a vast, ambiguous notion, Nou (and accompanying music) uses substantial “ma.”  Although Nou is not easily understood because you need to have some background knowledge, at least probably you could tell it has a strangely slow tempo, and a similarly strange unstable pitch.

If we try to express temporal “ma,” we could have used rests.  But you would soon realize that rests wouldn’t work – because the “ma” in Nou cannot be counted clearly.  When it sounds like four counts, it could actually be 4 1/4 or 3 9/8, or whatever.  “Ma” is not mechanical or mathematical.  And it’s because it’s placed to express ambiguity – ambiguity blurs boundaries.  If we define a “ma” like a rest, four, two or 1/4 counts, it’s no longer ambiguous.

“Ma” can only be determined through relative relationships – musicians and dancers communicate silently and create “ma” collectively.  And that’s where “yugen” emerges – something unfathomable you cannot capture.

We now have to question: where do these aesthetics of ambiguity come from? Why are they a natural part of Japanese aesthetics, or Japanese traditional culture, but not part of, say, European culture?