How is Buddhism different from Christianity? A quick guide for dummies

Buddhism is elusive. You might think it’s related to Zen, but then, Zen is also elusive. So how do you know what it is? Fortunately, there is a way to intuitively grasp what makes Buddhism different from Christianity and/or other religions without going into complex theological detail. You can do this by going back to the fundamentals and asking why we needed religion to begin with.

Religion might not have developed if our world was an ideal, perfect place, full of happiness and eternal stability. But unfortunately that’s not the case. The world we live in is full of uncontrollable and painful events, including the worst one – the unpredictable and unavoidable inevitability of death. Faced with constant sufferings and fears, people desperately needed salvation and emancipation – a hope or higher standard that will never, ever betray us as long as we do the right thing. Believe and you will be saved – that was the message of religion.

Religion is about an unalterable/supreme truth that stands firm on the shaky ground that is called reality, where nothing is certain and can be taken for granted. If our world was full of obstacles to happiness and fulfillment, religion had to become everything that reality was NOT: absolute, supreme, eternal and 100% embracing and forgiving. If reality was an accumulation of spontaneous and uncontrollable events, religion had to be an inalterable truth beyond anyone’s reach. For many monotheistic religions including Christianity, that truth is called God. God is the supreme existence that created everything and gave the world order, a being on which we can rely. God is the ultimate being and nothing or no one can be greater him. 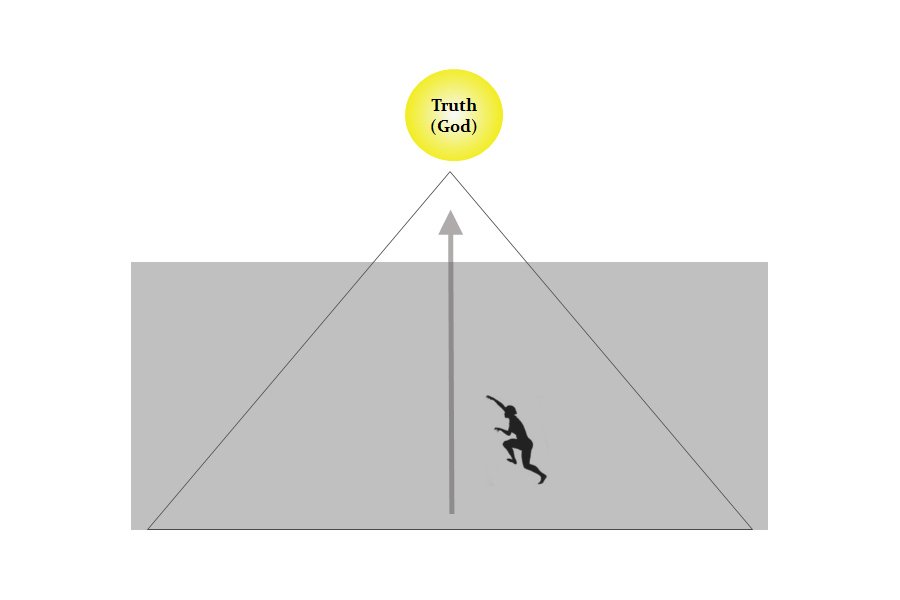 But in Buddhism, things look completely different. It does not have God-like entity. Instead, Buddha, who found Buddhism in the 5~6th century BCE, taught that the only absolute truth in this world is NOTHINGNESS. Complete emptiness. Zero. Nada. The religious truth, and the core teaching of Buddhism is that the true face of this world is nothingness. 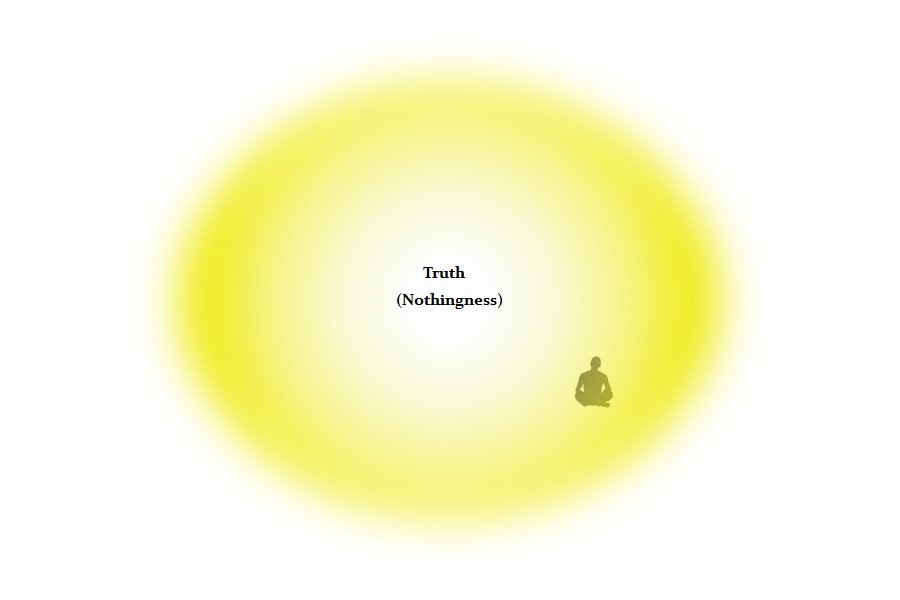 Conceptual drawing of Buddhism: the core of the Buddhism is “nothingness.”

In a nutshell, Christianity versus Buddhism is about God or nothingness.

But this is confusing. How can a religion work without God, and how can the concept of nothingness – no substance at all – compare to God? How do you worship nothingness?

In order to find an answer, we have to go back to fundamentals again, that religion is an absolute existence that stands on the shaky ground called reality. It’s an absoluteness that exists in the universe in which nothing is absolute.

Clearly this is almost mission impossible, but our ancestors came up with at least two options that turned out to be very powerful. The first path was to keep fighting, against all odds, until absolute absoluteness was finally established. Such endeavors crystallized into the concept of God. Yet another way was to accept the fact that the ground we were standing was would always be shaky. Accept that and there is no way to establish God since you can’t build a strong house on an unstable foundation. That’s what Buddhism did.

Then you might wonder if there is salvation within Buddhism: if there is no God, no one can possibly save us. There is no hope! But Buddha discovered otherwise. In the world in which nothing is absolute, everything automatically becomes relative. Justice for one person can become injustice for others. Everyone has his/her own “best xx ever.” This relativity – the fact that everything existed only in relation to other existences, which only existed in relation to other existences, which existed in relation to etc.…was the ONLY absolute truth in this universe. Buddha maintained that you could attain eternal peace of mind – salvation – when you were able to completely dissolve in this absolute relativity, in which even pain or suffering become relative.

This concept of absolute relativity is called “縁起” (pronounced engi in Japanese). According to Buddha, it’s the environment where we all live, where everything we perceive is established only because it has relative relationships with other elements or factors. “I” exist only because my surroundings shape me. Even if you were the only living creature on Earth, your body would still be made of different elements which are affected by external elements, including time. (The “me” of yesterday is not exactly the same as the “me” of today – at least, it is one day older.) You are, therefore, absolutely relative. It may make you feel helpless because it sounds like the “me” in the engi world is deprived of identity. It may be true, but it’s a very positive selfdom-less-ness. Here’s why. As much as external elements shape you, you are shaping others as part of their surroundings. And as such relationships keep expanding infinitely, you are part of everything in this universe, and you are made of the entire universe. By becoming nothing, you can become something much, much larger than who you think you are. By becoming nothing, you become the entire universe.

In Buddhism you find eternal peace (called Nirvana) when you are able to completely vacate your body and mind – freed from desire or greed – and thoroughly dissolve into the vast universe. When this happens, the world becomes infinite nothingness that is filled with everlasting peace. No more pains, sorrows, nor fears.

If Christianity finds absoluteness in God for salvation, Buddhism finds it in your own self. You are part of the universe of potential called nothingness that will allow you to arrive at eternal peace. In Buddhism, everyone has the potential to become Buddha, although getting there is a long journey. The Buddha who is already in Nirvana is the supreme guide who can walk with you though the process.

Christianity and Buddhism share the same goal which is to seek absolute, supreme truth in order to live better, even when faced with countless challenges. However, they use the opposite paths to reach it. Both are powerful, and peoples’ resilience to find multiple answers for such a daunting question is the ultimate exhibition of our collective, indomitable spirit.