Back to Chapter 1: Power of Zero

In Chapter 1-3, we discussed the “power of zero” and its manifestation through the act of “subtraction (Chapter 2)” and “condensation (Chapter 3).” In this Chapter, we will review a more advanced form of “zero” – absence. 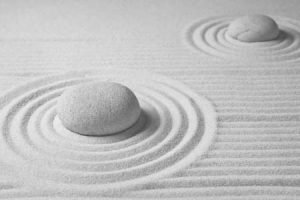 The aesthetics of absence is well represented by kare-sansui, the Japanese traditional garden design philosophy, commonly known as the Zen rock garden. It is probably what you picture when you hear the word “Zen.” Meaning “mountains and waters made of lifeless elements,” kare-sansui lets the infinite beauty of nature emerge by intentionally eliminating plants and water, the two central elements for a conventional garden.

Due to some interesting historical twists, Zen priests in the Middle Age Japan were highly sought after, not only as religious mentors, but also as artists. Social elites such as aristocrats and military leaders hired them for a variety of artistic activities including calligraphy, flower arrangement and garden design. Muso Soseki (1275-1351), one such prominent Zen priest and an exceptional garden designer, established the foundations of kare-sansui.

Zen priests used kare-sansui to express the ultimate state of body and mind believed to be reached after relentless, life-long religious pursuit. Called nirvana, it is the state of perfect enlightenment in which you are completely dissolved into the environment, freed from all kinds of pain and desire. The process to attain nirvana is a process to strip off everything you have – both tangible and intangible – one by one. As contradictory as it sounds, Buddhism believed that you would achieve the highest state of mind filled with peace and happiness when you finally learn to dismiss a fixation on the material world.

Kare-sansui is therefore an art of absence. In order to express the eternal peace and tranquility attained after you let go everything, it scrutinized every element in a garden and eliminated non-essentials, including water and plants.

The slides show how real nature (the first slide), which is vast and full of features such as mountains, waterfalls, and trees transcends into the aesthetically and metaphysically crystallized kare-sansui (slide 2-4).

It is symbolic that kare-sansui eliminated water first which is what makes every life on Earth possible. Water is joy, beauty and abundance. That is the reason why it is the central part of a garden, which celebrates the beauty of nature full of living things. When there is less water, thee are less signs of life. It is as if kare-sansui removed the core of a garden.

Kare-sansui can have multiple levels of subtraction that create different aesthetic effects. Because very limited amount of water was involved, the number of plants were reduced first. In place of greenery, rocks were erected. Rocks have always played a central role in Japanese gardens, especially since the Japanese maintained an ancient animism-oriented worship directed at rocks. In order to express respect for nature, the rocks were usually used as found. Raw shapes, sizes, mineral compositions, colors, textures etc. were appreciated and used to represent natural or symbolic elements. Then, as the next step, kare-sansui reduced the mass and the number of rocks.

Isoya Shinji, an agriculture and landscaping expert and the former President of the Tokyo University of Agriculture, wrote a book “Japanese Gardens” (日本の庭園、中公新書), which is a great overview of the history and aesthetics of Japanese gardens. In the book, he calculated the number of stones per Tsubo (about 35.6 square feet) for some celebrated Zen rock gardens, including the ones shown above, by dividing the number of rocks used by the total area.

The “East Garden” of the Daisen-in is one of the textbook kare-sansui masterpieces. Created in the early 16th, it condenses the world of Chinese landscape paintings in a space as small as about 1,100 square feet (100 square meters), part of the residential area of the Daisen-in Zen temple.

You can see two large standing rocks toward the center-left, which represent large, deep mountains along with the trees in the background. (in kare-sansui, central mountains often mimic “horai-mountains,” which are mythical mountains in ancient Chinese myths believed to be inhabited by hermits.) There are waterfalls to the right of the mountains which are expressed by three rocks of different heights. They contain vertically distributed quartz, making them look as if water is falling on their surfaces. The pebbles in front of the waterfalls are the rivers that collect water from them which eventually branch out into two directions. The main stream runs toward us (if the visitor is looking at the garden from the room), and the other runs to the left of this picture. The river goes under the beautiful bridge, down the weir and pours into the vast ocean. In this small space, each rock is carefully placed to play a unique role. Some represent cranes and tortoises (symbols of long life), and some other rocks represent boats in the ocean.

The entire garden is an exquisite and condensed representation of a natural landscape. Elements try to mimic the real shapes of the things in nature. There are few metaphysical details.

There are 3.4 rocks per Tsubo. 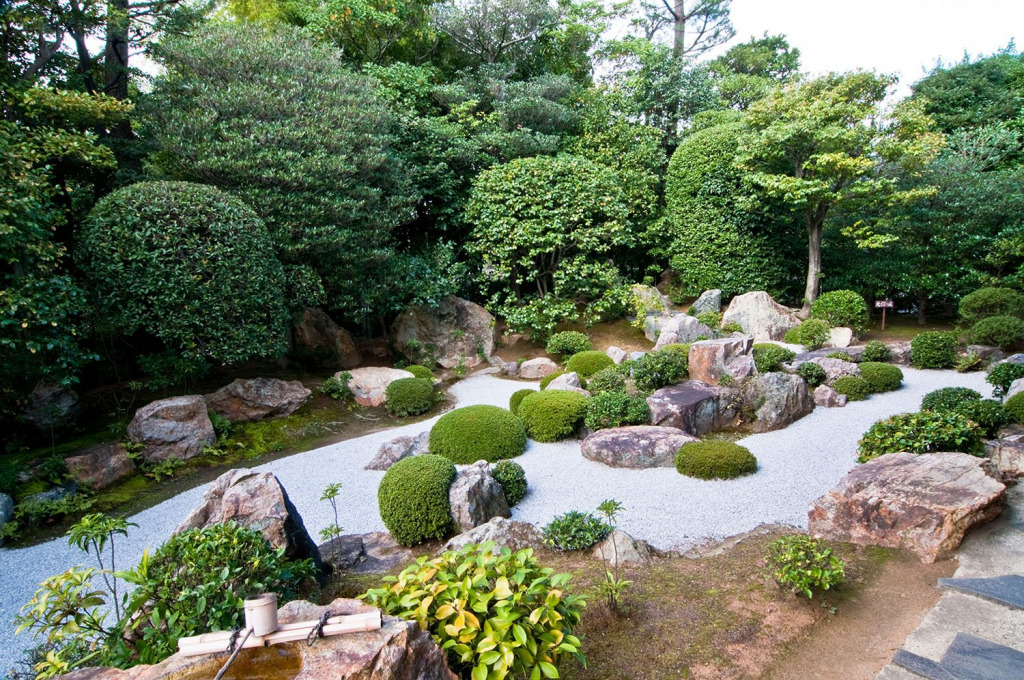 Whereas most kare-sansui gardens were designed by Zen priests or garden specialists, the Notonobu-no-niwa (Motonobu’s garden) at Myoshin-ji Taizo-in was designed by Motonobu Kano (1476-1559), one of the most influential painters who cemented the aesthetics of the “Kano school,” which dominated Japanese painting for hundreds of years until the Western method was introduced in the 19th century.

Compared to the “Easte Garden” of the Daisen-in, which is defined by the sharp, upward forces and rough surfaces of many one-of-a-kind looking rocks that mimic natural elements, Motonobu-no-niwa is much more relaxed and impressionist-like. The rocks used in this garden are smaller, lower and have much smoother curves compared to the Daisen-in garden.

It is believed that Motonobu used his own paintings to design this garden. It means that the beauty of real nature was first condensed in a drawing, then materialized as a garden. As a result, natural elements were raised to a symbolic level, reducing the need for a variety of rocks to be present to express different natural elements.

And if this garden looks not so “lifeless,” it is because Motonobu exclusively used evergreen plants to express eternal beauty. This garden represents artistic symbolism.

There are 1.5 rocks per Tsubo.

Ryoan-ji Sekitei (rock garden) is probably the most famous and mysterious kare-sansui. Although it’s believed that it was created around 1500, it is not known who designed this garden and what the theme was. For more than 500 years, people have been trying to solve the mysteries. There are many theories.

There are only 15 rocks installed in a small space of about 800 square feet (74 square meters). The 15 rocks form three groups of 7 (5+2), 5 (3+2) and 3 pieces, the three odd numbers. The combination of those numbers have stirred so many theories, involving everything from ancient Chinese Yin-and-Yang philosophy to the European “golden ratio.”

One of the most famous theories is that the rocks tell the story of a tiger and its three cubs crossing the river, based on ancient Chinese folklore. But how do four tigers translate into 15 rocks? No one has come up with a reasonable explanation.  Some other people believe that the garden is supposed to express “imperfection” to remind us that we are all imperfect.  While the number 15 was considered to constitute the perfect universe, this garden was designed so that you can never see all of them at once: the view of at least one rock is always blocked no matter where you are. Other theories suggest that the rocks represent five major Zen temples, or five major mountains in China.

There are no longer any rocks that replicate real objects in a way we can tell what they are. Everything is elevated to a conceptual, abstract level.

There are 0.1 rocks per Tsubo.

Next: Chapter 4-2 Absence on senses
Back to Chapter 1: Power of Zero