Back to the top of Chapter 4: Abundace by absence

The almost empty kare-sansui garden at Ryoan-ji was so mysteriously abstract and beautiful that it inspired many artists from various genres.  John Cage (1912-1992), the American contemporary/avant-garde composer, left a series of drawings titled “Where R = Ryoanji,” and a music piece titled “Ryoanji.” Arata Isozaki, an influential Japanese architect who led post-modern era architecture, left a text (poem) for a short film “MA: Space/Time in the Garden of Ryoanji” which he co-created with Takahiko Iimura.

A garden is a device for

Sense the space that surrounds you

to the sound of silence

Picture how hollow emptiness permeates us all

It is intriguing to see the way the Ryoanji garden inspired artists: their output no longer had to do with the physical garden, or the absence of thereof. It was elevated to something metaphysical, shapeless, boundless and much larger. The void, or emptiness created by absence can be filled with anything. It’s the source of limitless potential called “kuu,” as observed by Buddhism.

By the way, the most well-known and controversial piece that John Cage wrote is 4′ 33″, which is literally the music of absence. There was no single note to play on the score for the duration of 4′ 33″.  The musician would come on stage, sit there without playing the instrument, and then leave the stage when it’s time. This piece was also influenced by Zen.

Water and plants are essential for a garden. Sound is essential for music. When these elements suddenly disappear in spite of our expectation, our senses and cognitive abilities become very alarmed. They start working frantically to fill the absence, only to realize that there is nothing there we can lean on. But then, something amazing happens. Instead of feeling desperate or upset by the lack of expected elements, our senses and abilities start filling the void on their own.

And it is not just our imagination that is stimulated by absence. Try this famous cognitive science experiment. There are two slides: one has a pair antonyms, hot and cold. The second one has the same pair, but the second word only has the first letter “c.” Which pair is easier to memorize?

This is part of an experiment conducted in 1978 by Norman Slamecka, a widely recognized cognitive scientist who was at the University of Toronto at the that time. It was carried out to validate the so-called “generating effect” which describes a phenomenon where information is better remembered if it is generated from one’s own mind rather than simply read.

He gathered a group of voluntary students and had them memorize pairs of words such as associate (e.g. lamp-light), category (e.g. ruby-diamond), opposite (e.g. hot-cold), synonym (e.g. sea-ocean), and rhyme (e.g. save-cave), using flash cards. The first group was given the cards with words printed in full (hot-cold) – “read” condition, and the second was given the ones that showed only the first letter of the second word (hot-c) – “generating” condition.

Researchers have been mystified by the effect and struggling to explain its mechanism in a scientifically significant way. But if you have read through the “Story of Zero” from Chapter 1, you may already know what is driving it: it is the power of zero. The absence of letters stirs our ability to memorize information. Not despite of, but because of the absence of the external help, our own cognitive capacity decided that it needed to act on its own, and reacted swiftly.

In “Glass Cage: How Our Computers Are Changing Us”, acclaimed author Nicholas Carr described that the students under “generating” condition performed better by “simply forcing their minds to fill in a blank, to act rather than observe.” The end result was “stronger retention of information.” By the way, “The Glass Cage” examines the personal and social consequences of our ever growing dependency on computers, robots, and apps. It is fascinating to know how a variety of high-tech intelligence is making our cognitive abilities inactive and lazy, instead of active and aroused.

The same applies to the relationship of colors and our vision.

Is white a color? 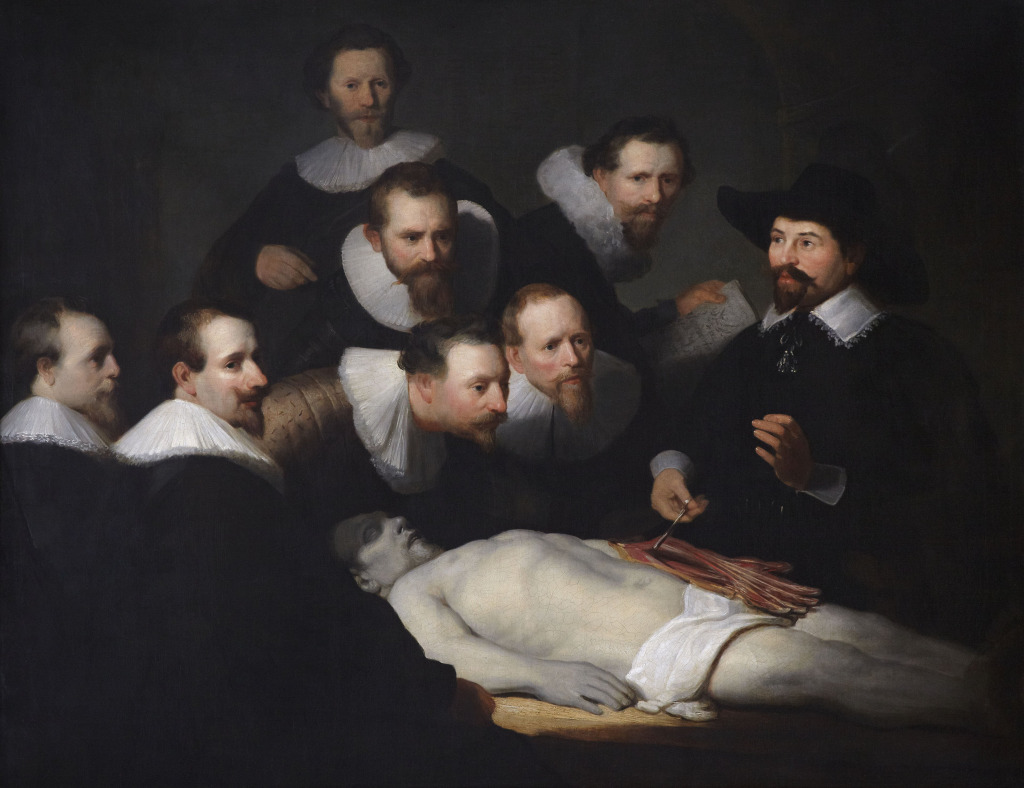 Or is it an absence of color? 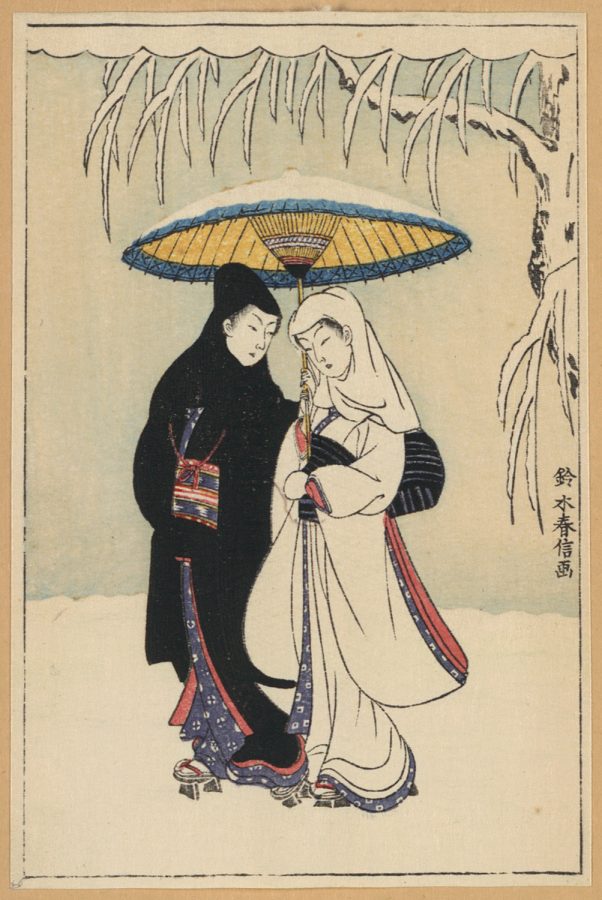 Rembrandt is famous for his painting style that contrasts strong light and heavy shadows. Carefully chosen central elements are illuminated by light and stand out while the rest is left in the thick of the darkness. In the “Anatomy Lesson of Dr. Nicolaes Tulp,” the contrasts stun us: first, the contrast of the whiteness of peoples’ faces – which have rosy tone because they are alive – and the almost blue whiteness belonging to the corpse. Then, the two stages of our existence – life and death – expressed by two forms of whiteness, are distinguished from the surroundings, which are left dark. Except for the collars, the robes are black, and the room looks empty and grim with little light.

In order to let such a stunning contrast emerge, Rembrandt used an abundant amount of color, applying a technique called “impasto.” Impasto is the paint laid on a canvas in quantities so that it would stand out from the surface. It intensifies highlights by increasing the light-reflecting properties of the paint. Rembrandt created the impressive contrast of light and darkness by leveraging the mass of paint.

Harunobu Suzuki (1724-1774), the master of ukiyo-e (Japanese traditional woodblock printing), had a different idea. In his famous work “Couple under an umbrella in the snow,” he expressed the white by using no paint. If you take a closer look, you may be able to see that there is no paint in the white area in the upper part of the umbrella. In order to express the soft, frail texture of snow piling on it, Harunobu leveraged the quality and texture of the underlying paper, which is exposed in this drawing.

Harunobu became popular for his “bijin-ga” (portraits of photogenic women) that featured slender and cute-looking women expressed by delicate and fine touches and tones. He also contributed to the expansion of “nishiki-ga (full-color print),” which improved the technique of woodblock printing tremendously. In nishiki-ga, ukiyo-e painters often played the supervising role to ensure consistent quality in various processes from woodblock making, coloring, printing to quality controlling of papers. Harunobu was a perfectionist who wanted the best quality for each process. He made sure to use the most appropriate quality paper to express the fine touch of falling snow.

Because the color is absent in white, many forms of potential emerge.  People associate white with light, purity, virginity, neutrality, flexibility, determination, potential, future and so forth. The potential is boundless.

Kenya Hara, the leading Japanese graphic designer who played a pivotal role during the conceptualization and the branding of Japanese company MUJI, wrote a book called “White.” He starts the book with an eye-opening statement:

“There is no such thing as White. Rather, ‘white’ solely exits in our sensory perception.”

Absence is the source of boundless potential.

Next: Chapter 4-3 Absence in business - Nissin Cupnoodles Museum
Back to the top of Chapter 4