Back to Chapter 3-3: Small is engaging - MUJI toothbrush stand

Images above  Left: Tai-an at Myoki-an, Kyoto  Right: Bamboo vase “Onkyoku” believed to have been made by Rikyu

In the previous posts, we reviewed bonsai and MUJI’s long-selling toothbrush stand to understand how smallness can condense the power of nature or the potential of the surrounding environment. Small things make overwhelmingly large subjects accessible, apprehend-able and editable.

Condensation can also be used to condense our own potential so that we can be directly connected and merge with vast universe. In order to feel the sense, we can leverage math. Imagine you are condensing the value “1,” using the step-wise approach. First divide 1 by 1, and make the denominator increasingly smaller. 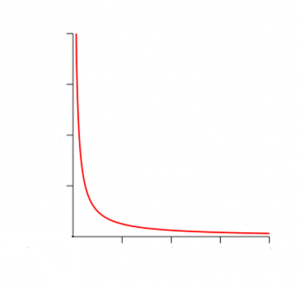 Ultimate condensation produces a breakthrough, which brings the current exercise to another level at which it is no longer bound to the definitions and restrictions that limited its potential.

And this is not just a mathematical phenomenon: there is a philosophical background to it. The notion of “zero” (called “sunya” in Sanskrit) was born in ancient India as a philosophical term to describe “nothingness.” It was further refined by Buddhism to mean nothingness – emptiness, but also to mean eternal truth or full potential, exactly because of its emptiness. (Read about “kuu” if you’re interested in the development of philosophical zero)

Then mathematics picked “sunya” to be used as a placeholder to express empty values. The duality of “zero” to mean nothingness and full potential at the same time is clearly embraced in 1/0 exercise. And the condensation has the power to reveal the truth of zero=infinite potential. It is a catalyst to connect our world to infinity.

Let’s take a look at chashitsu, the Japanese traditional tea house whose evolution was all about condensation.

What is tea ceremony and chashitsu?

In order to review chashitu, we need to understand what tea ceremony is. According to Kakuzo (Tenshin) Okakura (1863 – 1913), probably the first Japanese who lectured about the tea ceremony outside Japan while holding multiple positions at the Museum of Fine Arts, Boston, tea ceremony is “a religion that teaches us how to live and behave.” “Tea is no longer just a drink: it has been elevated to a format/style that shows us pure refinement. The host and guests engage in a sacred endeavor to co-create ultimate happiness taking advantage of once-in-your-lifetime encounter.” (岡倉天心 茶の本. NHK出版. P32) (By the way, Okakura’s classic “The book of Tea” is still available if you are interested.)

The origin of the current tea ceremony is “wabi-cha,” which emerged as a counter-movement to extravagant tea parties hosted by social elites around 15th century. As used in a term “wabi-sabi,” wabi originally meant “feeling sad, lonely or miserable.” It found a unique space in Japanese aesthetics appreciating beauty in things that are on a declining slope or in a solitary, deficient situation. Wabi-cha was cemented by Juko Murata (1422-1502), a Zen priest who declared that “茶禅一味 (the tea ceremony and Zen share the same essence).” It was then elevated by Sen no Rikyu (1522 – 1591), the most famous tea master who radically pursued simple, humble, minimal and anti-luxurious tea ceremony style.

In wabi-cha, chashitsu was a device to achieve the goal of tea philosophy, rather than a party room to entertain guests. As a result, it kept condensing its size. Juko came up with the 4 1/2 jyo (about 7 square meters) format, reducing the then-conventional chashitsu. It became the standard. 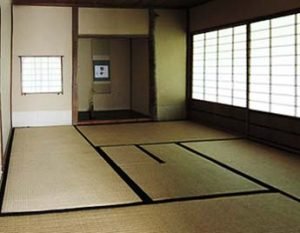 Chashitsu by TANAKA Juuyoh (田中十洋) via CC BY 2.0
A 4 1/2 jyo chashitsu (with 4.5 tatami mattresses). You can see the tokonoma where calligraphy and a small flower vase is displayed. There is also a small opening in the tatami at the center, which houses a fireplace for a teakettle. Shoji windows are furnished to let dimmed, subtle light come in. All in all, chashitsu is a minimalist room with no frills.

Then, Rikyu created something more drastic: Tai-an, a tea hut built in Kyoto in 1582 that was only 2 jyo (about 3.6 square meters). Even though the history of chashitsu was about becoming smaller, Tai-an’s size was extraordinarily small. It was so small that it never became the standard to replace 4 1/2 jyo, but people nonetheless agree that it represented the ultimate condensation of the concept of a room. (The inside of Tai-an is not open to public, and there are very limited resources in public domain. Watch this video from the NHK, the Japanese state-run media.) 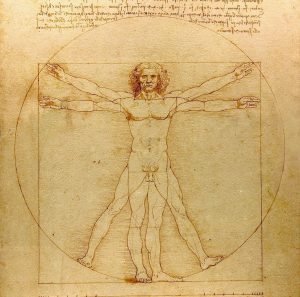 The Japanese unit for the area “畳 (jyo)” is based on the size of a tatami mattress which is based on our body size. It’s often said that you’d need ½ jyo to sit, and a jyo to lay on it. Two jyo can represent a person’s physical reach as it was depicted by Da Vinci. It is the fundamental size that would envelop your body with minimum margin. Fujimori imagines that Tai-an was designed to reflect the potential of our physical size.

Here is an interesting fact: Tai-an was designed for Toyotomi Hideyoshi for whom he served as a tea master. Hideyoshi was in the middle of a crucial war which later made him the ruler of the country – the Shogun. Tai-an was a temporary, make-shift tea hut created for a powerful military leader in the battlefield. What did it mean? (The hut was later moved to the temple Myoki-an, which is where Tai-an sits today.)

There are many opposing, even conflicting factors here. Whereas Rikyu radically pursued simple, rustic, humble Zen-influenced wabi-cha, he also served the most extravagant military leaders of the time, Hideyoshi (who actually ultimately ordered Rikyu to commit “seppuku”). And in order to deliver a tea ceremony for such a powerful man, he offered the smallest hut using bucolic materials such as mud and bamboos. The hut was built in the middle of a battlefield, whereas the ultimate purpose of tea ceremony was to appreciate real beauty of nature in a solitary environment through restrained conversation between the host and guests.

In order to embrace all these confusing factors, Rikyu designed a radical 2 jyo chashitsu leveraging the architectural (or rather anti-architectural) style called “so-an (grass hut),” which is a small, rustic hut built in rural areas using wooden frames, mud walls and a grass roof. Eliminating various architectural refinements, so-an was often used by people who decided to live outside the society to pursue Buddhism or for other purposes.

Kengo Kuma, one of the most influential Japanese architects today, described Tai-an as “clothes” in his book “小さな建築 (The small architecture),” (Iwanami Shoten, 2013).

“You won’t understand what Tai-an is all about until you actually crawl into this small box and experience the very moment when the building, which is almost as small as your body, starts dissolving and enveloping your body softly and lightly, as if it were your clothes.

Kuma goes on to make a list of Rikyu’s almost avant-garde, acrobatic design breakthroughs that made Tai-an a clothes-like cocoon or womb, rather than a small piece of refined architecture. 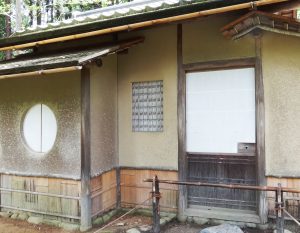 The Tea hut at Saiho-ji, Kyoto.
You can see the chashitsu details also applied to Tai-an, including mud walls, an exposed bamboo structure, shoji windows that come in different sizes and heights.

Tai-an eliminated many architectural details that would otherwise have given the space substantial aesthetic order, sense of stability and protection. And in the absence of those details, Rikyu applied radical condensation. As a result, Tai-an became almost gravity-free. It must have felt like a cockpit that integrated your body and outer space, inviting you to a journey to explore your inner self – a vast universe.

At the culmination of his “wabi-cha” pursuit, Rikyu let ultimate condensation emerge that consumed everything. It was the condensation of our inner self and potential which was elevated to be directly connected with the vast universe.

Next: Chapter 3-5 MUJI Houese - Edit your own life style