Back to Chapter 1-6: Intro to zero - they key to profound happiness

And, by the way, this is not a new experiment at all. For thousands of years, our ancestors have been seeking the optimal point of arousal that would align with the right amount of pleasure/pain so that they could find true happiness. In Asia, various types of philosophies and religions have tried subtracting pleasure to find the perfect cognitive optimal point that cannot be swayed by external factors.  And “zero” played the critical role in their pursuit.

Today we can experience the results of their sophisticated experiments in the form of refined art, philosophy and religion. Especially in the Middle Ages in Japan, Zen emerged as an artistic vehicle to pass on what religious leaders saw as the culmination of their quest for zero. Zero is actually the very old black. 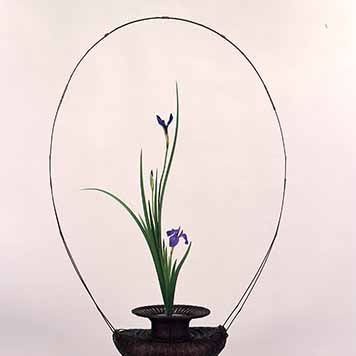 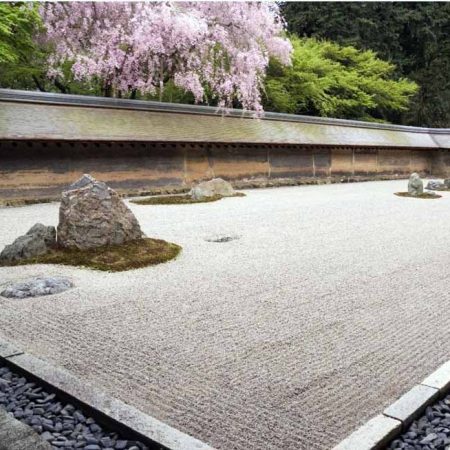 Left: Ikebana (Japanese traditional flower arrangement) was founded by Ikenobo Senkei, a Zen priest in Kyoto, in the middle of the 15th century.
Right: The Zen garden at Ryoanji, probably the most well-known kare-sansui garden. Kare-sansui is a garden design philosophy that does not rely on water and plants to let the beauty emerge. It was founded by Muso Soseki (1275-1351), a prominent Zen priest.

The “zero” (or mathematical zero) that we know today was first materialized in India around 650 AD. It was conceived as a placeholder to recognize “nothingness” to perform complex calculations. The original sign for zero, or dots under the numbers, was also called “sunya” — a concept from ancient Indian philosophy to describe “emptiness,” “void,” or “sky.” While mathematical zero emerged as an essential element to advance science in the modern world, “sunya” has always been the major interest of Asian philosophy and religions.  Buddhists especially devoted themselves to pursue the truth of zero.

Buddha, who founded Buddhism in the 5~6 centuries BCE in India, used the notion 縁起” (engi) to describe the concept of zero. He used “engi” to teach that everything we perceive is “empty,” because it is established only because of its relative relationships with other elements or factors. He maintained that nothing actually exists despite our perception, if the definition of “existence” requires uniquely definable substantiality permanently.  His theory was further cemented by a great Indian philosopher called Nagarjuna who established the thinking system surrounding “空” (kuu) in the 2nd~3rd century AD.

Reviewing Buddha’s “engi” concept, Nagarjuna found that all the things around us – both tangible and intangible – can be perceived only because of the relative and mutually influencing relationships with other elements and factors. I exist only because my surroundings shape me, but each element that constitutes my surroundings can exist because of my presence. And we collectively exist because of mutual relationships. This is the reason why everything is “empty (kuu).” And because all are kuu, they are inherently temporary, and because they are temporary, words and statements are always conditional. And within kuu where nothing is absolute emerges solid neutrality. (To find more about “zero (kuu)” in Buddhism, read “Zero (kuu), the core tenet of Buddhism and Zen.”

Buddhism’s ultimate goal is to achieve the status of Nirvana, which is the imperturbable stillness of the mind after the flames of desire, aversion, and delusion have finally been extinguished. When you achieve Nirvana, you are freed from all kinds of sufferings, and acquire the status of Buddha. Since our sufferings are ultimately the result of desire and lust, you can only achieve Nirvana by giving up “wanting,” and seeking pleasure. As Buddha and Nagarjuna taught, we are empty and are shaped by our surroundings. When you finally achieve perfection, vacating the self by extinguishing the flames of desire, you will merge with the vast universe and acquire the eternal truth. The religious process to pursue Nirvana is a process to become “zero.”

Because of the profoundness of Buddha’s teaching, his followers eventually separated into different directions to pursue their own interpretations. After several centuries following his death, the Mahayana branch, founded by Nagarjuna, became the major school in Eastern Asia. Zen is one of the Mahayanah schools founded in the 5th~6th century. It flourished in China and brought to Japan in the 11th~13th century.

When Zen was introduced, Japan was in the middle of the power shift from aristocrats (Tenno, or Emperor) to military leaders (Sho-gun and dai-myo).  Military leaders were rapidly taking control of the entire country and accumulating wealth that the society had never seen before. Unprecedented accumulation of wealth resulted in unprecedented levels of conflict. The fights among regional military leaders intensified and peoples’ lives were devastated.

The Onin war (1467-1477) was the first civil war that involved most regions in Japan. It devastated Kyoto, the then capital which became the main battleground. Kamonnosuke Hisakuni, “Shinnyodō engi” (Origin of Shinnyo-dō Temple; Shinshō Gokuraku-ji), vol.3 from a set of three vols. 1524. [Public domain]

People were faced with a bitter realization: wealth is a source of pleasure, but it can cause devastating tragedy when people start fighting for it (and they always do).  If you are in power, you always have to be prepared for warfare and death. If you are a citizen, you cannot escape from social unrest and destruction.  People were torn between the pleasure created by wealth and the tragedy it caused.

They needed Buddhism to overcome the enormous stress and despair.  Zen priests were the go-to mentors in order to maintain a peace of mind in the face of harsh reality. Military elites especially sought advice from Zen priests, since Zen’s stoic approach to face truth – including life and death – resonated with the code of the samurai way of life, called bushi-do.

Supported by military elites, Zen priests pursued strict religious practices, including meditation to reach external truth, as they faced the harsh reality of how affluence and pleasure prompted conflicts and tragedy. They were determined to understand Buddha’s teaching of “emptiness” through their body and soul.

Ultimately, many prominent priests crystallized their internal breakthroughs (to extinguish the flame of desire) as the abstract of various arts. Once deeply and inseparably internalized in their physical and cognitive entity, “zero” has become a silent yet boundless source of beauty. One of the most famous artistic materialization of Zero is Kare-sansui, the Zen rock garden.

For the Zen priests, “zero” meant drastically reducing the amount of desire and pleasure, and vacating their body to dissolve into the environment. At the culmination of their zero journey emerged immense beauty.

The crystallization of zero was not nothingness.

They discovered that zero was abundance.

Next: Chapter 1-8 Nagata farming method and the power of zero
Back to the top of Chapter 1: Power of zero