The iconic Butterfly Stool designed by Sori Yanagi (1915 – 2011), which is part of the permanent collections of both MOMA and the Louvre museum, is 60 years old. To celebrate the anniversary, the Japan Design Committee organized an exhibition “BUTTERFLY STOOL 60th カタチの原点” from Jan 24th 2018 to Feb 18 2018 at the Matsuya Department Store where Yanagi unveiled the stool for the first time in 1956. 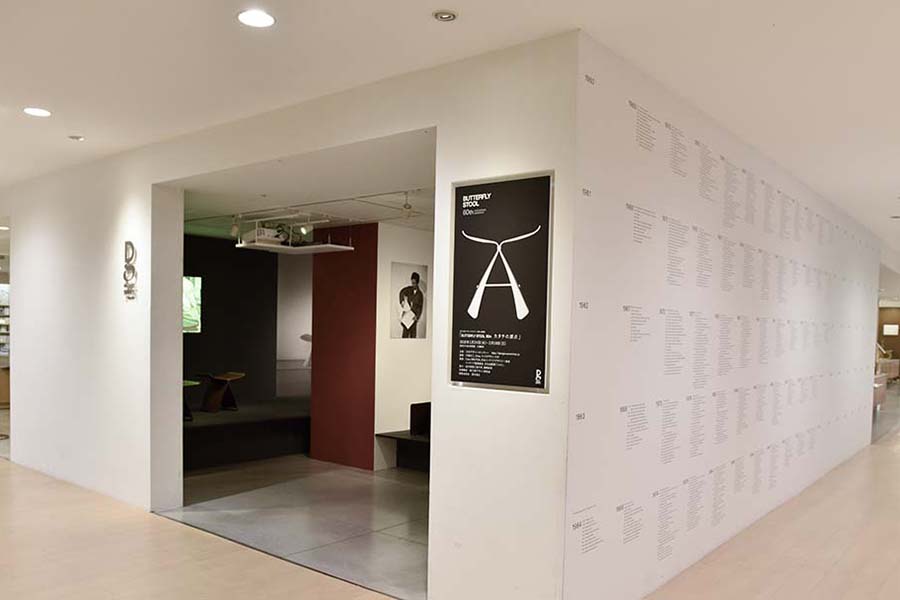 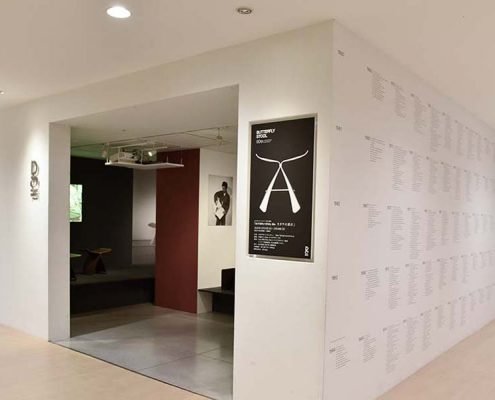 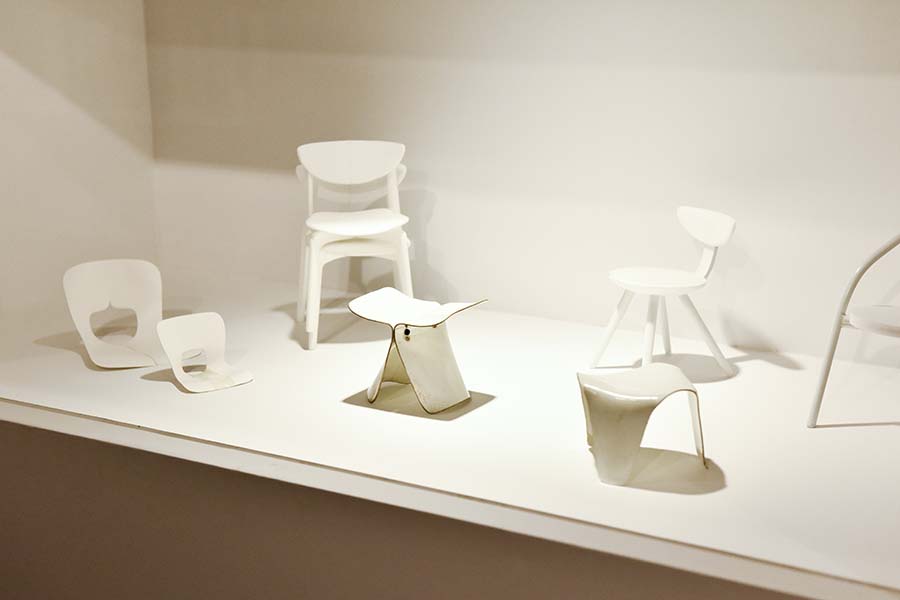 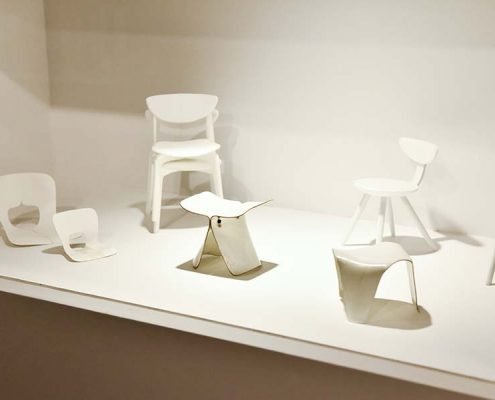 Yanagi, a trailblazer in the field of modern, commercial design in Japan, was born in 1915, the son of Muneyoshi Yanagi, an acclaimed philosopher and art critic who established the art category called “mingei,” which referred to re-discovering the beauty of everyday items made by craftsmen and artisans in the pre-industrial era. Growing up in an environment full of creative inspiration, Sori proved to be a talented designer but wanted to show that he was different from his father: he studied avant-garde art at the Tokyo Art School from 1934 to 40, where he met Takehiko Mitsutani. Mitsutani was just back from Germany where he had studied at the Bauhaus. He introduced Yanagi to the work of Le Corbusier, and this became an important influence for the young designer. Yanagi became fascinated with the potential of modern design to contribute to wider society by offering higher functionality. 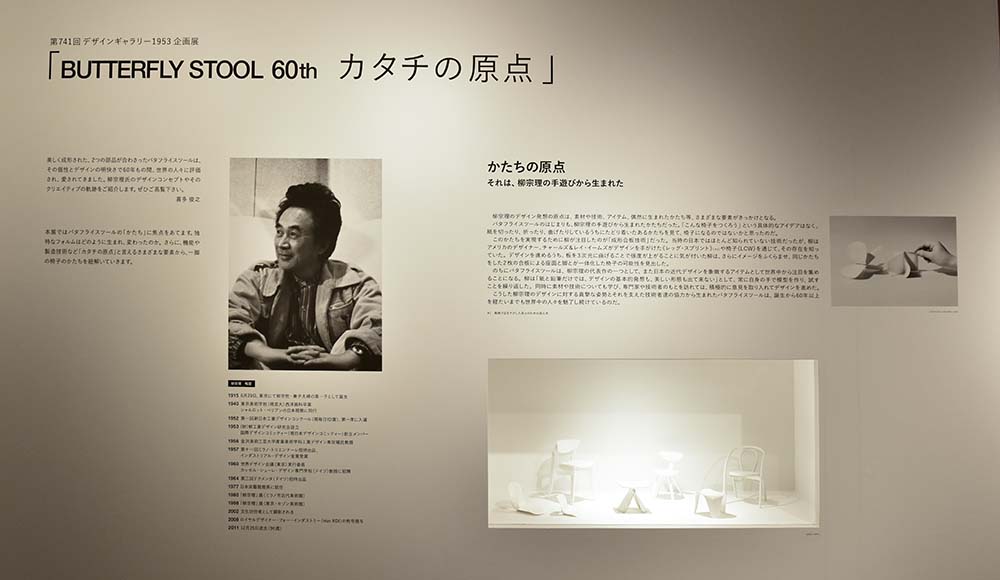 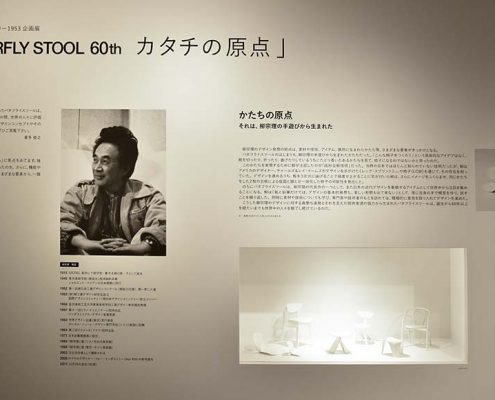 When Charlotte Perriand – who had worked for Le Corbusier as a furniture designer – came to Japan to teach modern design, Yanagi did not miss the opportunity to study with her. But interestingly enough, Perriand became fascinated by “mingei” during her stay in Japan, which forced Yanagi to look again at the beauty of traditional craftsmanship as promoted by his father. He realized, despite his initial opposition, that tradition and creativity were not mutually exclusive, and that modern technology could learn from old-style design wisdom.

His design became a unique combination of “mingei” and the modern, the two seemingly conflicting concepts because “mingei” is all about creating something using only your hands while modern technology relies on machines do the job. But by marrying the two, he pursued mass-produce-able products designed by fully leveraging our physical potential manifested through using our hands.

The butterfly stool, born in 1956, demonstrates the culmination of his philosophy, to fuse “handmade” design and emerging technology. Titled “カタチの原点 (the groundwork of the form)”, the exhibit focused on how Yanagi came up with the idea of a stool that used only two pieces of plywood and a couple of nuts and bolts to create such a fluid and unique shape. 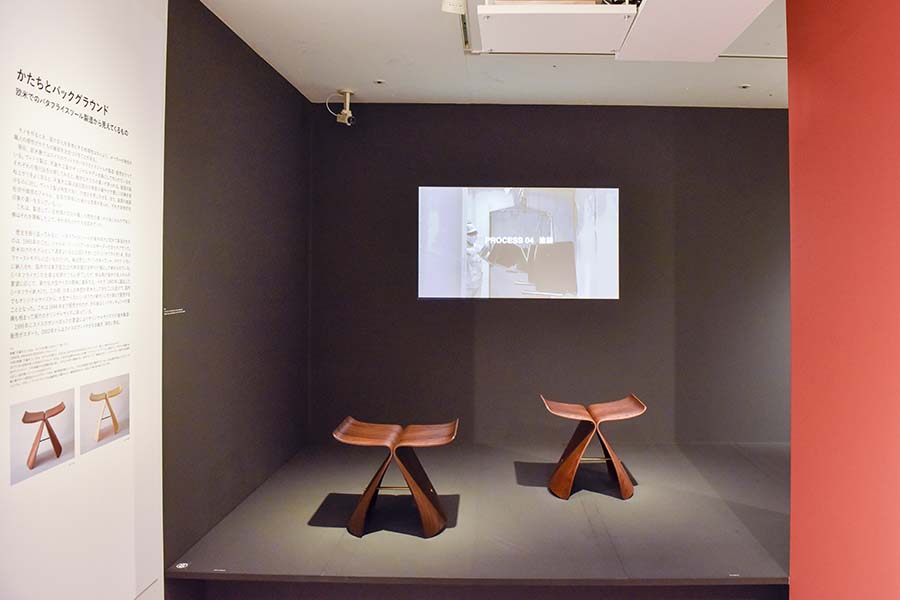 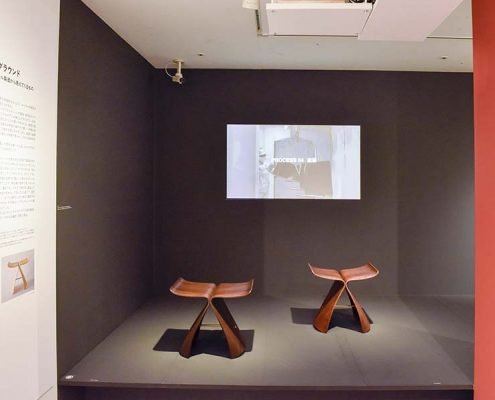 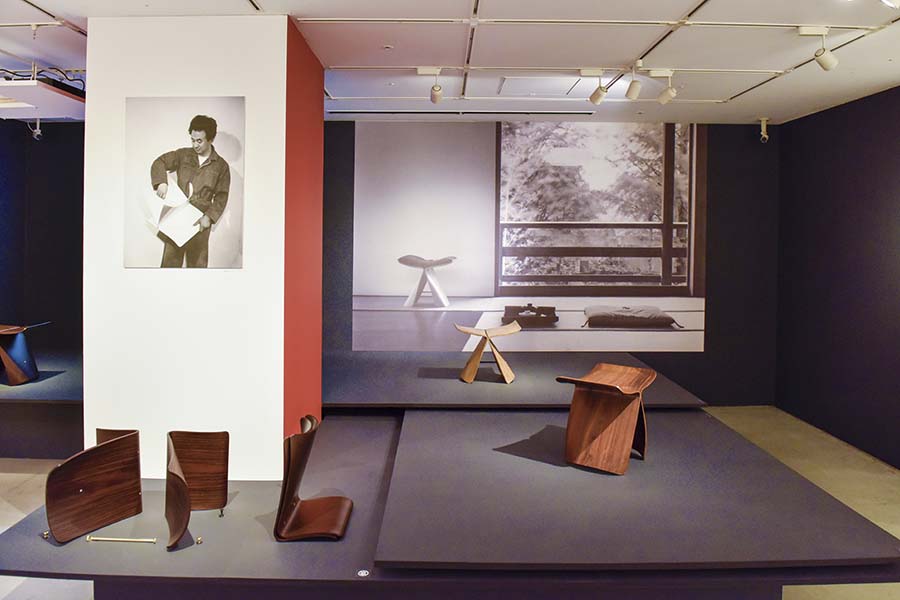 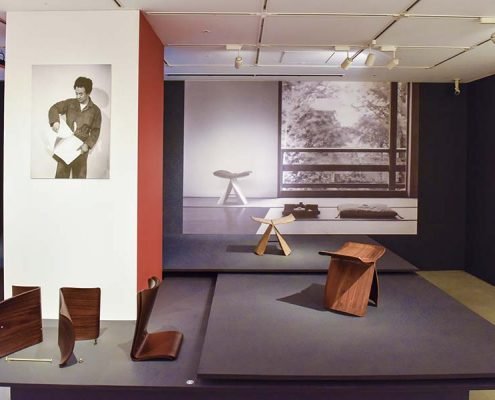 Yanagi found inspiration for design from various sources: materials, technology, everyday items or even the shapes he accidentally came up with by playing with materials using his hands. He came up with the idea for the butterfly stool while playing with a piece of paper, cutting, bending and folding it. At some point, it dawned to him that it could become a chair. He did not intend to design a chair; the chair design emerged from a spontaneous encounter with the unique shape he created using his own hands.

However, he needed a technological breakthrough to turn the delicate paper curves into a real product. He decided to try an emerging technology invented by the American product designer, Charles  and Ray Eames: it was called plywood. During WWII, Eames mass-produced molded plywood leg splints for injured servicemen which Yanagi saw when he visited Eames after the war. Since plywood was still virtually unknown in Japan, Yanagi tried to work with Saburo Inui at the national institute of design in Sendai, the almost only engineer who was studying plywood in Japan at that time. Inui and Yanagi visited Tendo Mokko, a small wood processing company in the forest-rich Yamagata prefecture in Northern Japan, that had invested in an expensive compressor (the first purchase by a privately-owned company in Japan) in 1947 to produce high-precision plywood. The three agreed to continue working to  commercialize the butterfly stool.


As Yanagi kept refining the design, the team realized that the strength of plywood actually increased when it was bent three-dimensionally. Inspired, he came up with two identical pieces of plywood that seamlessly combined to form the legs and the seat. The two pieces are assembled using only a couple of nuts and bolts and a stay bolt. 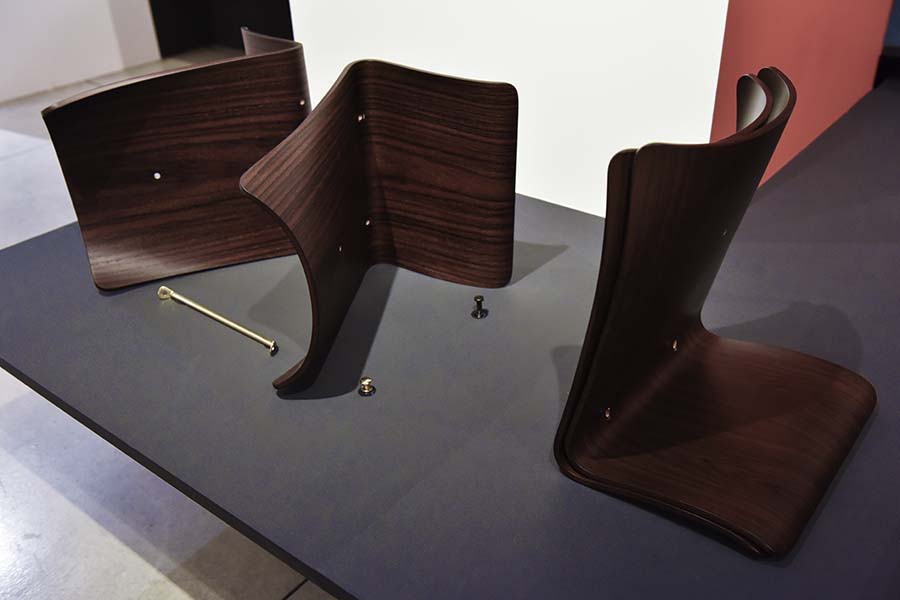 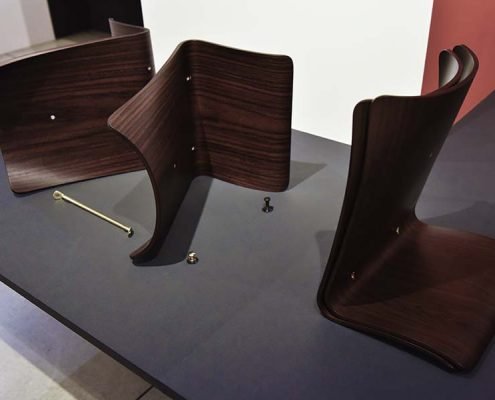 It took Tendo Mokko, Inui (who later joined Tendo Mokko to become the expert in plywood design and engineering) and Yanagi three years to finally unveil the product in 1956, at the first exhibition at the Yanagi Design Institute at Matsuya Department. By that time, the stool had beautiful curves made from plywood just 7mm thick – the thinnest it could be – that was made by alternately layering 1mm wood sheets, satisfying both the strength requirement and design aesthetics. Yanagi even designed the brass bolts and nuts himself, the same ones that are still used today. 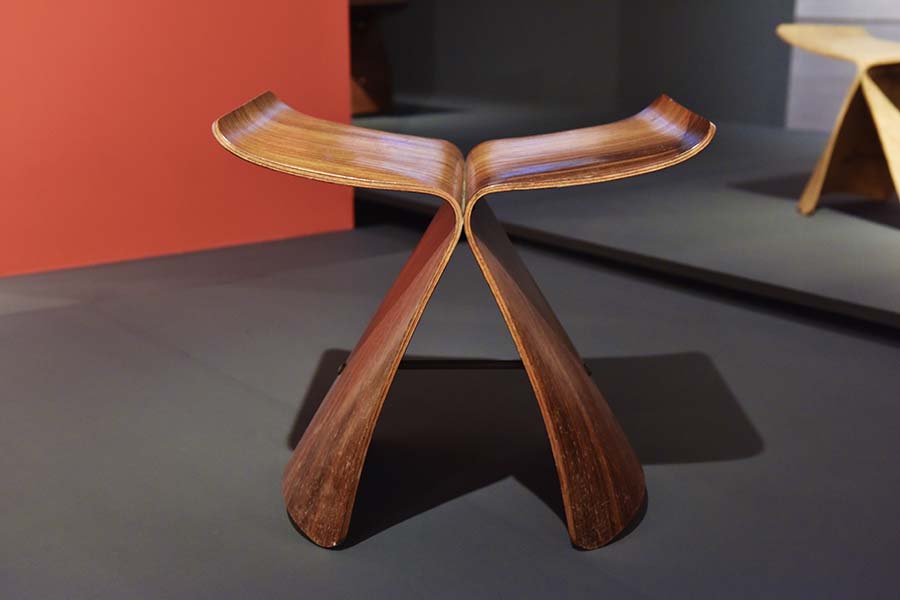 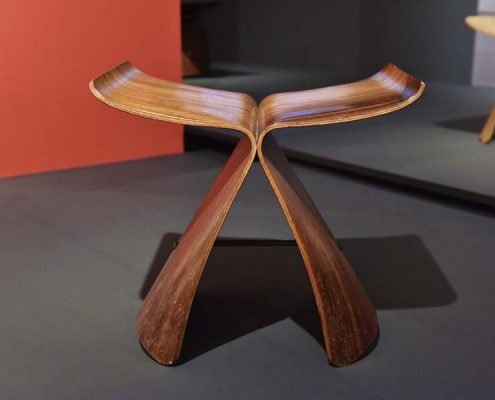 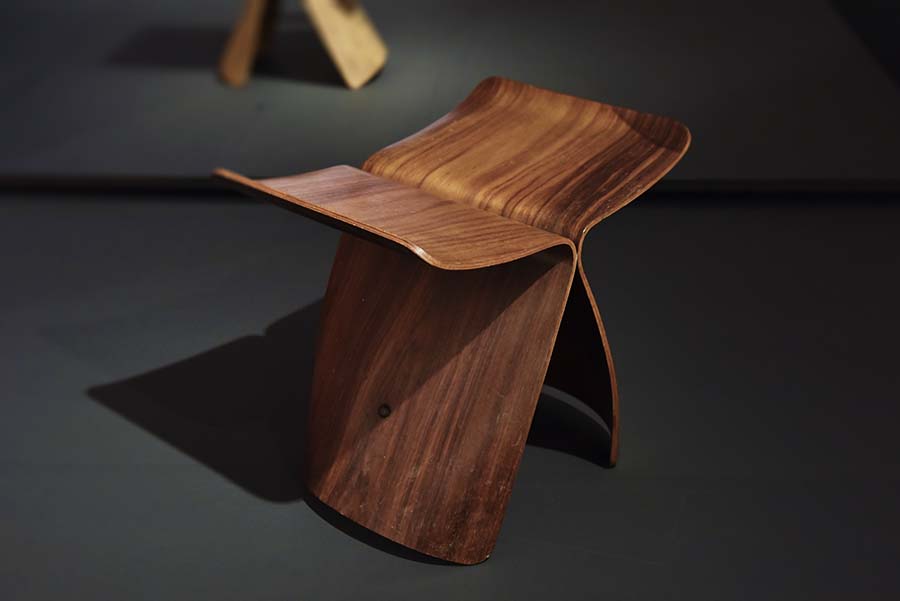 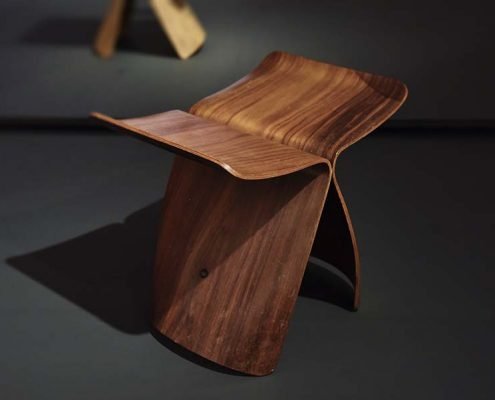 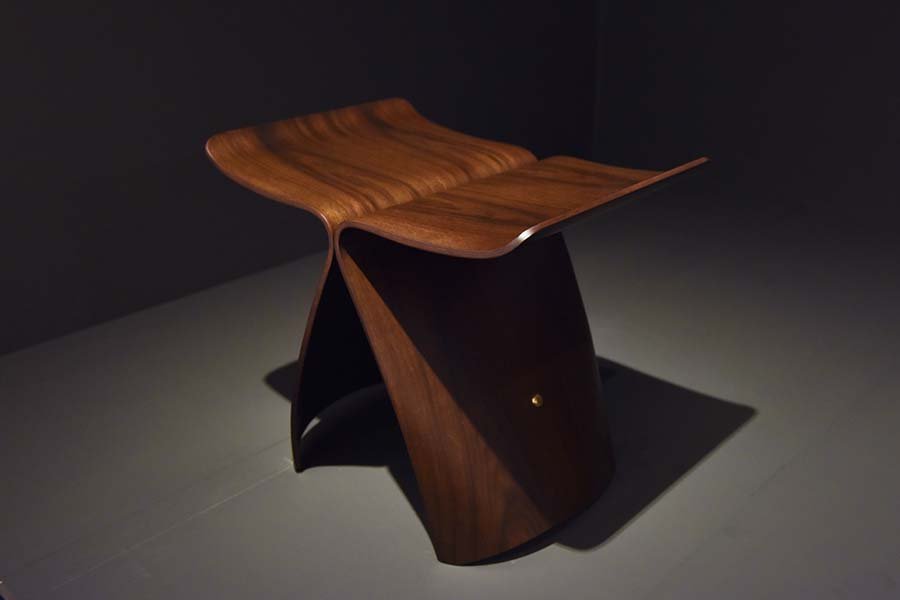 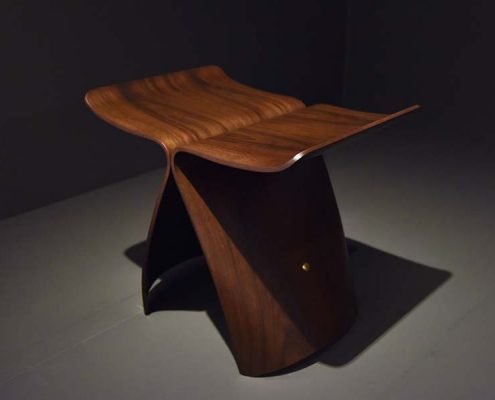 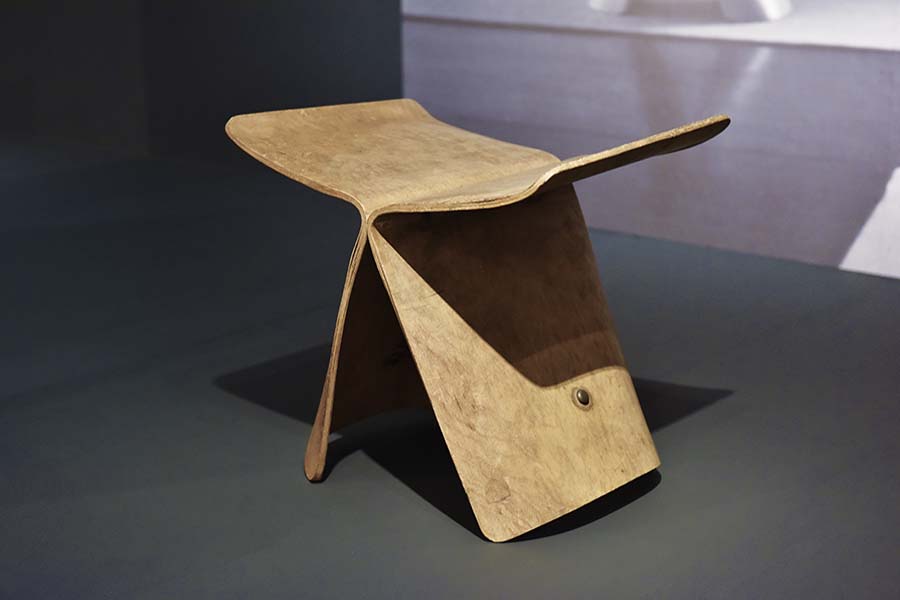 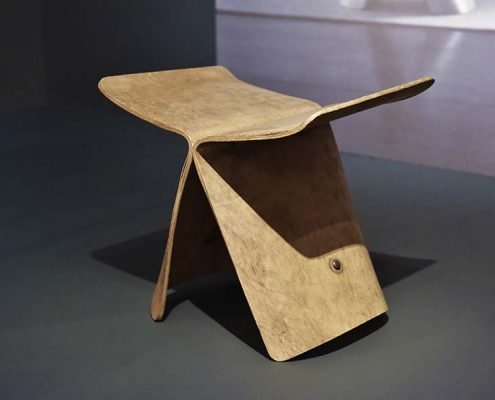 Yanagi’s design philosophy was: “You don’t produce a product by designing it. The process of creating a product generates the design.” He never believed in designs that relied only on the drawing board and made countless handmade models for each and every product. That is the reason why his products fit users’ bodies or hands so perfectly. But as a trailblazer for industrial design, he also focused on usability, advanced technology, mass production, and rational, no-frills design. It is fascinating to discover how much creative and technical energy were devoted to this minimal product. Subtracting elements is much more difficult than addition, but when it’s achieved, it creates something universally beautiful that stands the test of time.