Animals fight each other.  Some of them are fierce predators. But we don’t blame them for being cruel and barbarous.  Why? Because we know that they need to do so in order to survive.

There is a fundamental rule that applies to all living things on Earth: none of us are self-sustained. We all need to rely on external resources for energy and nutrients to survive.  None of us can live without sacrificing others’ lives.

For non-humans, methods to sacrifice others’ lives are rather crude. But that’s not because they are evil; that’s the only option available for them.  What about humans?  Humans are strikingly different from other creatures in that they have the power to control and increase the amount of resources available to them, and save excesses for longer-term stability.  Luckily, we don’t have to live in a world where “kill him, or you’ll get killed” is the primary thought when you see a stranger down the street, like many other animals.

However, even with this ability, humans’ history has also been the history of collisions.  We still rely on the lives of other directly and indirectly, and fight each other if needed.  Maybe Thomas Malthus is right: human population grows a bit faster than the rate at which production capability grows.  And it makes sense from an ecological perspective.  In order to avoid the risk of extinction (which is what all the living things collectively and unconsciously attempt), every species, or every subgroup of a species has an incentive to increase its population whenever it can.  It increases the odds of expanding its territory and its ability to thrive.

But it’s a risky bet.  When a high population increase rate triggers a resource crunch, a catastrophic ending is often unavoidable.  Some insects see population outbreaks, but it’s usually abruptly interrupted when the group ends up eating everything available in their territory.  When this happens, the population typically decreases to a level even lower than pre-outbreak.

Humans can handle the situation better, but still, food and resources have never been enough to satisfy everyone over the course of their 100,000 years journey.  First, productivity increases.  Then population increases based on an exception that there would be enough food for more people.  When population increase outpaces productivity gain, people collide: there have been famines, social unrest, invasions and wars.  So there is an inherent risk to an increase population, unless you have a crystal ball to accurately predict productivity increase.

And we don’t have a crystal ball. Today, our planet holds 7 billion people and the pace of the growth in the last 100 years has been outrageous.  Amid such an aggressive growth, we don’t know what the maximum production capacity for that population growth rate would be, be it on a global scale or regional scale. 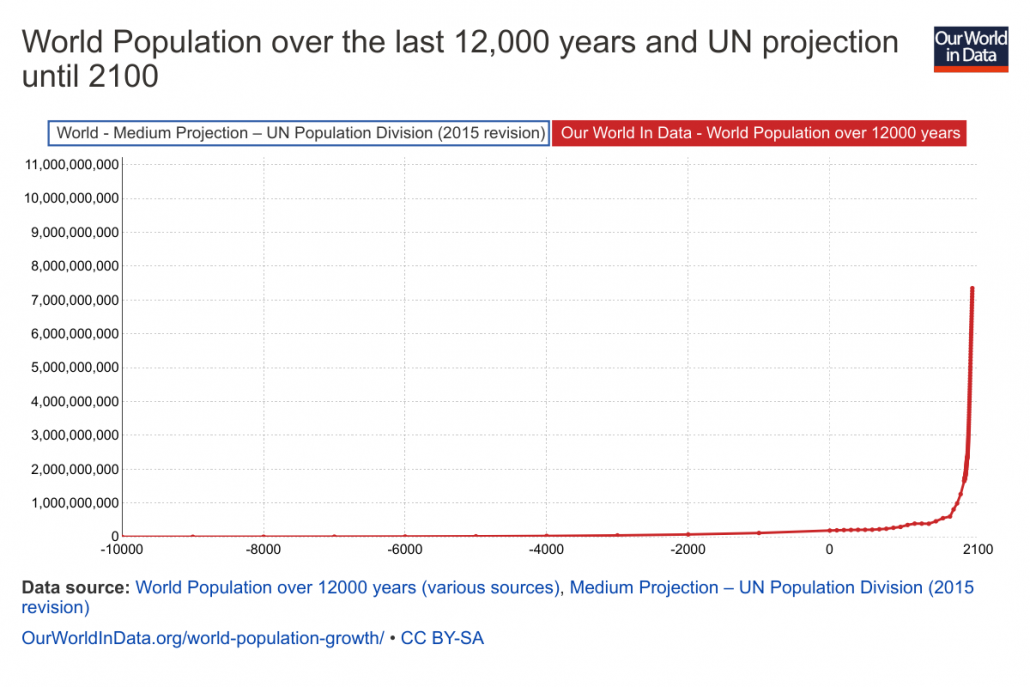 While we sort of assume that we can keep increasing our capacity infinitely (we never stop calling for economic growth) to accommodate an ever-increasing number of people, the resources, once seemed distributed efficiently and increasingly equitably under the democracy, capitalism and global free trade with the help of ever-advancing technology, may be becoming scarce again – and rapidly.  There are increasing numbers of people around the globe who are feeling the pinch.  And people who were feeling the pinch spoke out through Brexit and the US presidential election process in 2016.

What many of us didn’t realize during Brexit and the Trump campaign was the real faces of the people who were feeling the pinch and feeling neglected.  Those new faces of the “disadvantaged” people reveal the fact that just living in a “developed nation” as a member of the majority group no longer secures a better economic status.  As a freer economy spurred global competition in virtually every aspect of our lives, everyone became entrapped in a fierce competition – even those who live in remote villages that have no contact with the outside world.  Well actually, those remote areas, struggling to adapt to a rapidly changing economy, turned out to be the new “disadvantaged.”

Winners and losers are now spread across the globe. It’s no longer possible to easily group and label who the winners and the losers are (developed nations are the winners and the developing nations are lagging behind).  The world has become such a complex place that we cannot decide exactly who to blame when we cannot outcompete and succeed.  Nonetheless, winners take all – and increasingly so.  Frustration simmers.

It is a stark reminder that the resources cannot be distributed sufficiently to everyone, even with the current level of technology and production capacity.  And a new group of people – so many of them – is feeling the pinch.  Poverty is becoming a looming crisis even for the middle class. And they emerged even under the capitalism and free trade, which was supposed to distribute the resources most efficiently.  Politics wouldn’t have changed the trajectory decisively, because both conservatives and liberals are for capitalism, and for free trade – to some extent.

Does it mean that we are maxing out our resources?  If that’s the case, it’s not at a regional level this time. It’s probably at a global level.  And people are already colliding against each other on many fronts.  Divisions now exist where we didn’t think they did previously.  Political discussions are important, but if what if what we are witnessing now through Brexit and the Trump phenomena is the beginning of the collision caused by a global resource crisis?  It’s time to find our best crystal ball if we want to avoid a catastrophic ending.