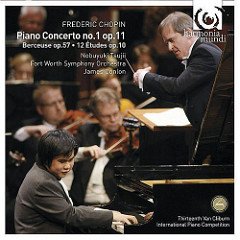 Do you know the young Japanese pianist, Nobuyuki Tsujii?  He first drew global attention when he won the Van Cliburn Competition, at Fort Worth, Texas, in 2009. He was 21 years old.  Ever since, he’s been actively touring and winning enthusiastic fans around the world.

He is blind, since birth.

The fact that he is blind is something that almost everyone mentions first, when she/he talks about Tsujii’s accomplishments.  The media would usually write about how many hurdles he had to overcome to get to this point in his life, and how he had to memorize everything by ear, because he couldn’t access sheet music. And yes, it’s stunning that he’s memorizing everything from complicated piano pieces by Maurice Ravel, to lengthy piano concertos by Sergei Rachmaninoff, by ear.  But is this the reason why he is so acclaimed? Are we even more impressed because we appreciate all the hardships he had to endure?  Going to his concert and listening to him live helps you answer this question. I had the opportunity to attend his concert in April 2015, at Weil Hall, in Santa Rosa, CA. 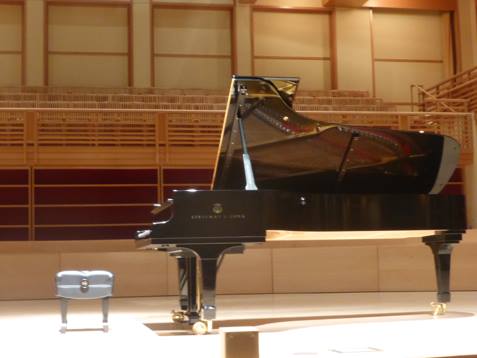 In order to come on stage and get seated, he needed to be guided by a helper. That person would whisper to him so that he could bow to the audience, in the right direction. That scene made me feel like, “we are here to support you, despite your challenges! We are cheering for you!”

But once he starts playing, you could quickly realize that it wasn’t the point at all. The fact that he cannot see, has tremendous effect on his music, but not in the way we’d imagine: as an obstacle.  At the end of the day, it wasn’t the audience who was cheering for him; it was him cheering the audience, filling the place with explosive music.

To me, it was such an unusual feeling…..I have never felt that way when listening to any music.  He took me to the world where sheet music does NOT exist.

“Moon Light Sonata” by Beethoven, is probably one of the most accomplished “architectural” compositions.  Even if you don’t read music, you should be able to tell visually how lucidly his music is organized.  You should also find symmetrical elements here and there.

And we subconsciously “visualize” that mathematical logic, using sheet music, or other reading materials.  Classic music, rich with such reading materials, is almost like architecture that is built on a solid foundation, and how it’s built is written and codified, lucidly, in thick documents.  It’s undeniably three dimensional: there’s axis for sound, and axis for time, but there’s also a spacious axis, where we store elements like theory, knowledge, history and image/color.  And this spacious axis is dominated by the visual.  When we play or listen to the music, we are subconsciously mobilizing all three axes. Visual plays a big role in music.

The beauty of classic music is the depth of this three-dimensional foundation. It’s the enormous accumulation of great talents and efforts made over centuries and centuries.

And here emerges Tsujii, who lives in a perfect two dimensional world. He is free from the spacious axis, which is filled with “codified” information that forms the basis of classic music.  Of course I am not saying that he is ignoring the theories and rules of classic music, or that he is consistently out of tempo.  But since he never absorbs information through visualization, but solely relies on his ears to do that, his interpretation is completely different from those who do it through visualization.

The end result is truly special.

During the concert (just to be clear, the above video is from the BBC Proms in 2013, not the solo recital I attended), I felt like I was listening to, and enjoying, the vibration the piano was making, not just the sounds. We don’t usually give it a thought, but sound is actually vibration. It moves the air, and it travels through air. It reverberates with objects.  Because Tsujii’s ears are so keen, I almost felt that he was trying to convey the best vibration, along with the sound of the piano. And the vibration reached me and was reverberating within my skull. It was euphoric. I said to myself, hey, my skull is now filled with music!  For the first time in my life, I was listening to the music not through my ears, but through my bones.

Also throughout the concert, I was feeling that the bars on the sheet music were dissolving and flying away.  Since I play music myself, it’s my natural habit to replicate a mental sheet music as I listen.  And on my mental sheet, the bars were flying away. The music was becoming a single, forceful (and very forceful) flow, like a river. I was completely submerged in a stream of sound, sometimes pushed gently, and sometimes gushed violently.

If you think about it, music is a temporal art that never stops. It keeps moving forward; it never goes back. A sound is born, and then quickly disappears. There is Tsujii, who is pressing the keys on a beautiful Steinway, and there are sounds he’s just made right behind him, and there’s a blank future before him.  I vividly pictured the perfectly two-dimensional world as I listened.

It’s a bit intimidating, because in this two-dimensional world, there’s only sound and time that can guide you.  There’s the past, which is the sound he made, and there’s the blank future that he is going to paint, with his musical potential.  But nothing else.  What a lonely, but abundant world of music.

I would not call Tsujii’s blindness a blessing, and it should not be. But he reminds us of the potential of our ears and “hearing,” when it’s working at its full capacity. And it is beyond what you’d imagine.

Our senses are helping each other, even when we don’t realize it.  Our visual sense helps our hearing, and our sense of touch helps our vision, while our sense of smell helps our taste. Whereas there’s synergy, there’s also a danger.  A habit can be created when relying on external help, before fully unleashing each sense and capacity.  Even more so when we try to rely on external products or services to enhance our ability.  We all know how easily we forget how to spelling something, because we no longer actually write words, but simply allow a digital dictionary to spell check words for us.

Try to subtract your sense, and subtract a dimension that you take for granted, and see how your body reacts in order to fill the void.  You will be surprised to find it is not necessarily a restriction or constraint, but is a new opportunity to unleash the unexplored potential you’ve always had.

More on arts and culture