In today’s divided and volatile world, we need an outside-the-box, upending of values in order to achieve happiness. 100 years after the Bauhaus, the “Less is more” economy explores an abundant and fulfilling life by moving away from material/financial excess in order to unleash our true potential. Good-bye to the draining and endless competition for “more,” and good-bye to economic efficiency. It’s time to embrace our inherent power and resilience to start designing our own happiness.

We love “more.” More assets, more money, more friends and more “likes” are all good because they bring us happiness. But despite our long-standing, determined loyalty for “more,” the notion of “less is more” emerged during crucial societal turbulence in history; around the First and Second World Wars as a modern design philosophy; as transcendental Japanese aesthetics when the society was on a drastic transformation from the Middle Ages to modern era. And if you hadn’t noticed, it’s trending today, not just in the world of design, but also as a lifestyle choice, such as the minimalist, decluttering or tiny house movements.

And if you look at the timing carefully, the “less is more” concept surfaced when society was at the pinnacle of euphoric economic growth. Why on earth did people have to seek “less” when “more” looked to be strong and prevailing? Does it mean that too much “more” can become toxic? Can it turn into “less” if something goes wrong? Most importantly, is “less is more” telling us something important; that we are feeling uncertain, frustrated and divided, instead of feeling jubilant and triumphant, despite living in the most affluent world in history?

If you are having trouble wrapping your head around the imbalance between today’s “robust economy” and social divisions and uncertainties, and also are looking for reliable clues in order to lead a fulfilling, happy life in this rapidly changing world saturated with materials and opportunities, and also with intense emotions and challenges, it’s time to revisit “less is more.” We have been there before, witnessing what we are going through today. Act as if we were living in 1928, and re-discover the true potential of “less is more.” 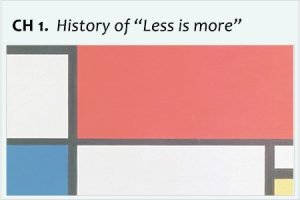 Modern designers in the early 20th century embraced the notion of “less is more,” which revealed two sides of the same coin – the Jekyll-and-Hyde like character of “more,” and the surprisingly pure, natural and relatable quality of “less.” Find out how people’s relentless pursuit of economic growth often led to catastrophic results, and how people reacted to them resiliently to re-discover the power of “less.”

We live in the most affluent society in history today. Then why are we feeling so divided, anxious and angry? It’s because our economy has a furious desire to control the entire planet using its lethal weapon: efficiency. It’s time to check if this is bringing us a sustainable happiness, because plenty of information and wisdom tells us that we are now heading towards the next global-scale crisis. 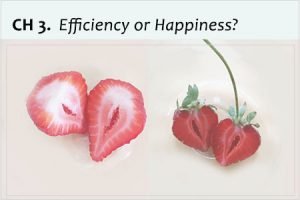 Efficiency is about rewarding winners, which pits all of us against each other in fierce competition and division. But we are not ready to give up on efficiency, believing that it bring us “more,” which automatically bring us happiness. But is this true? Discover the real face of the “more” delivered by the efficiency-first economy, which is actually unable to address people’s higher needs such as love, esteem or self-accomplishment. 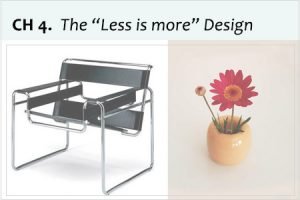 It turns out that an economic system is, by design, driven by instinct and selfishness. As efficiency aggressively advances its agenda, “more” is unavoidably turned into “less,” and competition intensifies. It is finally time to “upgrade” our economy into a happiness-generating platform where we can exchange those things we really care about and seek. But how do we do that? We can start it by replacing efficiency with “design.” 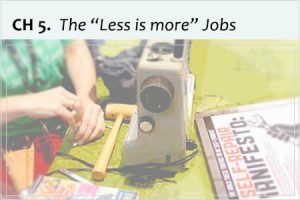 A big question for the “Less is more” economy: will producing and consuming “less” shrink the economy and result in massive job losses? What kind of jobs are being created by today’s aggressive economy? Are they relatable and accessible? Are they making you happy? What is a job anyway? 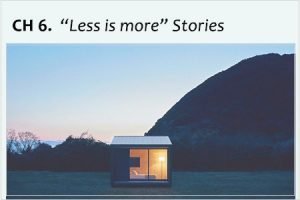 Discover many inspiring stories that leverage “less” – our own abilities and resilience that were left behind, unnoticed by the current economy – to generate boundless satisfaction and happiness. Welcome to the world of the “Less is more” economy where we design our own happiness.

The “Less is more” economy is a new project. Bookmark this page because we will update the contents to add new stories. Or you can subscribe for our newsletter from the side bar. Also, please let us know your own story!

The Circular Economy 300Yyears Ago 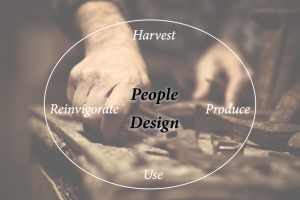 Archictecture, the Leader of the "Less is more" Economy 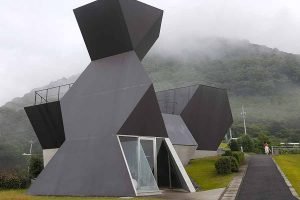 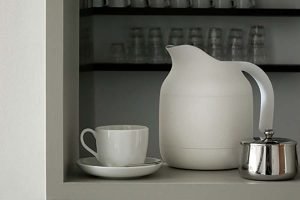